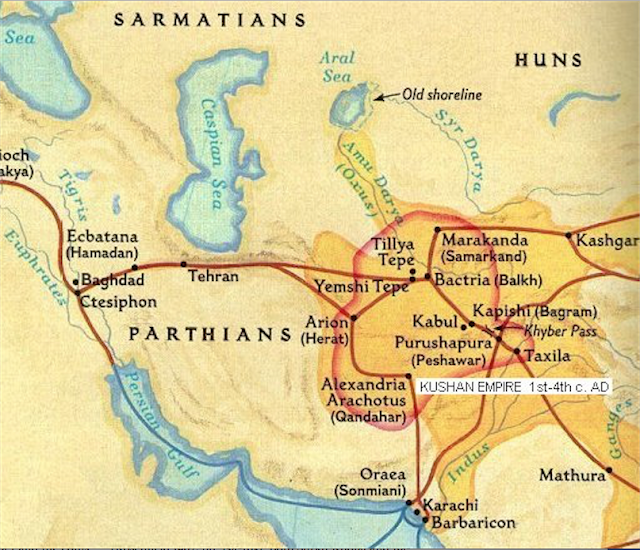 Balkh......Capital of Bactria in the Greco-Bactrian Period......Greco-Bactrian Kingdom‎: ‎256–125 BC..... 36.8N 66.9E......Balkh is a major urban site .....on the Oxus River...a major citadel...constant occupation from the Greco-Bactrian to the Timurid period...here the Greco-Bactrian King Euthydemus was beseiged by the Seleucid king Antiochus III and it was probably the capital of Bactria.....Coins of the Kushanshahs (dynasty which followed the Kushans in Bactria) minted coins from Balkh.......The YungDrung (swastika mark) is not encountered on Kushan coins, but it is an element on Kushanshah coins......It is likely the Kushan principal mint had been located in Balkh through the second and early 3rd Century AD.....Page 121......The city and the coin in the Ancient and Early Medieval Worlds......http://www.academia.edu/2078818/The_Mint_Cities_of_the_Kushan_Empire

"French Buddhist Alexandra David-Néel associated Shambhala with Balkh, also offering the Persian Sham-i-Bala, "elevated candle" as an etymology of its name. In a similar vein, the Gurdjieffian J. G. Bennett published speculation that Shambalha was Shams-i-Balkh, a Bactrian sun temple."....http://www.snipview.com/q/Greco-Bactrian_Kingdom?alt=Greco-Bactrian

Surkh Kotal..... 36.03N, 68.55E ....Surkh Kotal was a major site of direct importance to the Kushan dynasty is beyond doubt. It is the site of a bagolago, a dynastic shrine associated with the period from Wima Kadphises to Huvishka.....other Bactrian sites, such as Surkh Khotal should be considered as candidates for a mint....it was a prominent site for travelers between Bactria and Gandhara.... 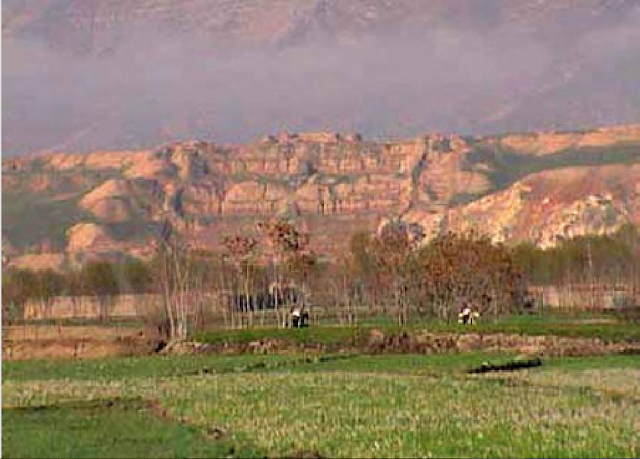 "Surkh Kotal / Atashkadeh-ye Sorkh Kowtal......on the road to Balkh (Mazar-e-Sharif), are the ruins of the Atashkadeh-ye Sorkh Kowtal (also spelt Surkh Kotal), a 1st century CE Zoroastrian fire temple believed to have been built by the Kushan emperor Kaniska I (c. 50 - 120 AD) whose statue was found within the temple......The ruins have since been plundered, statues stored in a museum smashed by the Taliban, and artifacts looted.....Built on the top and side of a hill, the temple complex would have been a imposing site, before its destruction, towering over the vast valley plains below. It was accessed by a long flight of steps leading to a stairwell, above which was a monumental stairway some fifty five metres high, rising in four flights, flanked by four terraces, to the temple on top of the hill.....The stairs led to a temple containing a 11m. x 11m. sanctuary - a cella - in which there was a platform flanked by four columns, and on which rested a fire altar. "......http://www.heritageinstitute.com/zoroastrianism/balkh/balkh2.htm

Kapisa (Begram)...35N 69.2E.....The site of Begram, excavated by Charles Masson in the 1830's.....produced enormous number of Kushan coins mostly as surface finds....'implies that most copper coinage from Wima to Kanishka II was issued from the Begram region....Begram remained under Kushan control even after Bactria as a whole was lost tot he Sasanians....

Peshawar (Kanishakapura) (Puskavalait)....Charsada 34.1N, 71.7E.......Ancient Pushkalavati. A source of radio carbon dates associated with Kanishka coins. Ali (2004) records a substantial number of coins in the Peshawar Museum as originating from Charsada including some parcels of Vasudeva II. There are coins from Soter Megas to Kipunadha including a large number of drachms of Kanishka. The later coins are mostly Vasudeva II.....Buddha roamed through this country with Ananda...King Chi-ni-chia (Kanishka) will raise a stupa.....(Chinese accounts)....an important mint for the Kushan Emperors....

Taxila...'Archaeologically Taxila is the most extensively excavated city site of the subcontinent'. A substantial number of Kushan coins have been found at the site along with preceding and following dynasties....Gold Mint was located at Taxila and Peshawar....excavated by John Marshal & Archaeological Survey of India 1913-1934.....at some point the advance of the Kushan Shahs (or Shaper II or the Kidarites) must have driven the Kushans from Taxila.....

Sagala (Sialkot)....the modern town of Sialkot is equated with the capital of the Indo-Greek King Menander, Sagala, as mentioned in the Milindapanho....

Mathura....(Mat)... 27.5N, 77.2E......Located on the western bank of the Yamuna River....Early excavations at Mathura concentrated on the recovery of sculpture and inscriptions, of which there are an enormous number. No site location has yielded as many dated inscriptions as Mathura, most of them relating to the period from Kanishka I to Vasishka......

"The Kushans were one of five branches of the Yuezhi confederation,a possibly Iranian or Tocharian, Indo-European nomadic people who settled in ancient Bactria. The Kushans at first retained the Greek language for administrative purposes, but soon began to use an Iranian Bactrian language closely related to the modern Afghan languages, absorbing the coinage system, Greco-Buddhist religion and art, and the Central Asian tribes that had previously conquered parts of the northern central Iranian Plateau once ruled by the Parthians."

"The Yuezhi or Rouzhi (Chinese: 月氏; pinyin: Yuèzhī, Wade–Giles Yüeh-chih) were an ancient Indo-European people originally settled in an arid grassland area spanning the modern Chinese provinces of Xinjiang and Gansu. After the Yuezhi were defeated by the Xiongnu, in the 2nd century BC, a small group, known as the Little Yuezhi, fled to the south, while the majority migrated west to the Ili Valley, where they displaced the Sakas (Scythians). Driven from the Ili Valley shortly afterwards by the Wusun, the Yuezhi migrated to Sogdia and then Bactria, where they are often identified with the Tókharoi (Τοχάριοι) and Asioi of Classical sources. They then expanded into northern South Asia, where they became unified under one of their five leading branches, who founded the Kushan Empire. The Kushan empire stretched from Turfan in the Tarim Basin to Pataliputra on the Gangetic plain at its greatest extent, and played an important role in the development of the Silk Road and the transmission of Buddhism to China."...Loewe, Michael; Shaughnessy, Edward L. (1999). The Cambridge History of Ancient China: From the Origins of Civilization to 221 BC.

Bagolago is a Bactrian term.....the Bagolago at Mat (Mathura)......equivalent Prakit term 'devakula' appears in the inscriptions....the Mat site is one of three certain complexes (others are Surkh Khotal and Rabat) which are part of the same sort of ritual activity....There may be many more similar sites....as many as eight sites.......There is no way for certain what a Bagolago was....The sites have several features in common. They are not public spaces...have an association with water...had erections of both Kings and Gods....unclear if the kings attended the gods or vice-versa.....there served some dynastic purpose but terms such as 'dynastic shrine' or 'dynastic cult' may be too strong....the presence of the Bagolago at Mat emphasizes the importance of Mathura....Mathura was the capital of Surasena which the Kushans ruled....http://www.academia.edu/2078818/The_Mint_Cities_of_the_Kushan_Empire