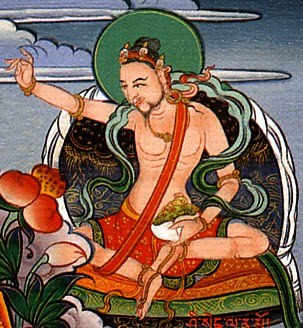 " Sri Simha, the Lion of Dzogchen.......Sri Simha, or Simhaprabha as he may have been known, was born in a noble family in the Cina Valley of northern India. He lived during the 8th century.......The location of the "Land of Cina" has been the cause of considerable confusion for both Tibetan historians and modern Western scholars, to the extent that even Dudjom Rinpoche's The Nyingma School of Tibetan Buddhism perpetuates the error of stating that Sri Simha came from China. Evans-Wentz, just as incorrectly, described Sri Simha as a Burmese guru. Dr. Hanson-Barber places Sri Simha in Central Asia, while Dowman has suggested that he was Khotanese. Tulku Thondup, author of Masters of Meditation and Miracles, describes Sri Simha birthplace as "a city called Shokyam on Sosha Island1 in China." None of these allocations are correct. To fully appreciate Sri Simha's background we must briefly digress into the geography of a mysterious seventh century Himalayan country called Suvarnadwipa and its southern neighbour, the Kinnaur Valley."......The Dharma Fellowship of His Holiness the 16th Karmapa, Rangjung Rigpe Dorje (1923-1981),

"Shri Singha was the chief disciple and successor of Manjushrimitra in the lineage of the Dzogchen teachings. He was born in the Chinese city of Shokyam in Khotan and studied at first with the Chinese masters Hatibhala and Bhelakirti. In his Ocean of Wondrous Sayings, Guru Tashi Tobgyal adds that Shri Singha received a prophesy from Avalokiteshvara while traveling to Serling, telling him to go to the Sosaling charnel ground in order to be sure of the ultimate attainment. After many years Shri Singha met Manjushrimitra in the charnel ground of Sosaling, and remained with him for twenty-five years. Having transmitted all the oral instructions, the great master Manjushrimitra dissolved his bodily form into a mass of light. When Shri Singha cried out in despair and uttered songs of deep yearning, Manjushrimitra appeared again and bestowed him a tiny casket of precious substance. The casket contained his master's final words, a vital instruction named Gomnyam Drugpa, the Six Experiences of Meditation. Having received this transmission, Shri Singha reached ultimate confidence. In Bodhgaya he found the manuscripts of the tantras previously hidden by Manjushrimitra which he took to China where he classified the Instruction Section into four parts: the outer, inner, secret, and the innermost unexcelled sections. Among Shri Singha's disciples were four outstanding masters: Jnanasutra, Vimalamitra, Padmasambhava and the Tibetan translator Vairotsana." [RY: http://rywiki.tsadra.org/index.php/Shri_Singha ]

"According to the Nyingmapa tradition of Tibetan Buddhism, the Dzogchen masters Manjushrimitra and Shrisimha were already active in the Tantric milieu in India independently. However, Manushrimitra, a learned scholar of Brahman origin, was evidently an adherent of the Yogachara school before his becoming a disciple of the mysterious Prahevajra or Garab Dorje (dga'-rab rdo-rje) from the country of Uddiyana (Eastern Afghanistan). It should also be recalled that his disciple Shrisimha was said to have born and resided for some time in China (more likely Chinese Central Asia, or, more precisely, Burma, as Chogyal Namkhai Norbu told in a talk he had June 15, 2010) before coming to India. And that the latter's disciple Vimalamitra visited China (or Central Asia) before and after he came to Tibet and transmitted the Dzogchen teachings to his disciples at Samye Monastery."

"The Reverberation of Sound, or Drataljur (Tibetan: སྒྲ་ཐལ་འགྱུར, Wylie: sgra thal 'gyur), is the root tantra of the Seventeen Tantras of the Upadesha-varga......These Seventeen Tantras are to be found in the Canon of the Ancient School, the 'Nyingma Gyubum' ....'Reverberation of Sound', 'Direct Consequence of Sound Tantra', 'Penetration of Sound', 'Interpenetrating Vibration', 'Transcendental Sound', (Tibetan: སྒྲ་ཐལ་འགྱུར, Wylie: sgra thal 'gyur).

"Kunsang (2006: p.334) in rendering the continued instructions of Sri Singha to Padmasambhava makes reference to nirmanakaya, sambhogakaya and dharmakaya and outlines:...'there are the three sections of the philosophical vehicles belonging to nirmanakaya, the three sections of Kriya and Yoga belonging to sam-bhogakaya, and the three aspects of development, completion and the Great Perfection belonging to dharmakaya. Among these, I shall explain to you the Ati Yoga of Instructions, distilling its quintessence, which is the Innermost Vajra Essence of the Unexcelled Fruition. So listen, Padmasambhava.".....Kunsang, Erik Pema (2006). Wellsprings of the Great Perfection: The Lives And Insights of the Early Masters. 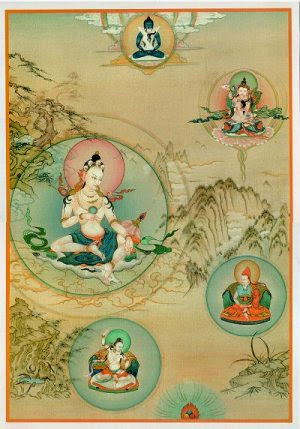 "The Pith Instructions of Dzogchen consist of esoteric scriptures written down by Pramodavajra, the guru of Manjusrimitra. Thus the lineage of Dzogchen-holders is said to descend from Pramodavajra (Tib: Garab Dorje), to Manjusrimitra (Tib: Jampel She-nyen), to Sri Simha (Tib: Pel gi Sengge), and then to Sri Simha's two disciples, Jnanasutra and Vimalamitra. The latter introduced the tradition into Tibet in the time of the Sage-King Tri-srong Detsen, who reigned from circa 755 to 797 AD.".....http://www.dharmafellowship.org

"Sri Simha divided the Pith Instruction into four sub-sections, and these are known as the Exoteric Cycle, the Esoteric Cycle, the Secret Cycle, and the Supreme Secret Cycle. Before his own death he deposited copies of the first three cycles in a rock cut crypt beneath the Bodhivriksha Temple of Sugnam (Sokyam) in the land of Cina. The texts of the Supreme Secret Cycle, however, he hid separately within the pillar of the "Gate of a Myriad Blessings". It is difficult, however, to clarify as to where these places in the Kinnaur Valley may have actually been.".....http://www.dharmafellowship.org

"The Shri Singha Monastic University, founded by Gyalse Shenpen Thaye, is a Nyingmapa university in Eastern Tibet. In the tradition, it is held that a manifestation of Sri Singha marked the spot for the location of the university, hence its name. Do Khyentse Yeshe Dorje consecrated the site laying the 'foundation stone' with his phurba."

"At the age of fourteen Simha, began the classical study of grammer, logic, art, medicine and law under the direction of a great scholar, Acarya Haribhala of the Bodhivriksha Monastery in Cina. Then at the age of 18, he went north into Suvarnadwipa to be enrolled in a collage of higher religious education..... in Suvarnadwipa he received the novice vows of a Buddhist monk and began to study scripture and philosophy. At the Five Peaked Mountain4 in Suvarnadwipa he also studied all the exoteric and esoteric Tantras under the low caste Master Bhelakirti......At Soshadwipa, to the west of Bodh Gaya in India, Sri Simha met the master Manjusrimitra and was initiated into the teachings of Dzogchen. ....It is also said that Sri Simha went to Bodh Gaya and extracted from the library of the Diamond-throne Monastery the Pith Instruction (Skt: upadesa, Tib.: men-ngak-de) of the Dzogchen Tradition that Manjusrimitra had previously deposited there......Sri Simha then took the Dzogchen teachings back with him to his home town in the Cina Valley and there he settled more or less for the rest of his life, becoming a famous teacher.".....http://www.dharmafellowship.org

Manjushrimitra, Jampal Shenyen An Indian master in the Dzogchen lineage and the chief disciple of Garab Dorje.

"Most Tibetan scholars assume that the land of Li is Khotan, thousand of miles distant in Central Asia, since "Li" became the common Tibetan name for Khotan. But we know that in earlier times the Tibetan name "Li" referred to Nepal, and it is much more likely that Nepal is the place where Sri Simha would have traveled, since the latter is not such a great distance from Kinnaur, in the same Himalayan chain of mountains. What is more, the biography of the yogi-master Vajra-Humkara informs us that he met and became a student of Sri Simha in a forest grove in Nepal. Sri Simha eventually died in that land. We also know that the master Padmasambhava, who later was to enter Tibet via Nepal, was a disciple of Sri Simha.".....Dharma Fellowship (2009). Biographies: Sri Simha, the Lion of Dzogchen.

The Lotus-born: The Life Story of Padmasambhava.......By Yeshe Tsogyal