"Lamayuru or Yuru Monastery (Tibetan: བླ་མ་གཡུང་དྲུང་དགོན་པ་, Wylie: bla ma gyung drung dgon pa "Eternal Monastery", Lama Yungdrung Gonpa......Urdu: لمیرو گومپا‎) is a Tibetan Buddhist monastery in Lamayouro, Leh district, India. It is situated on the Srinagar-Leh highway 15 kilometres (9.3 mi) east of the Fotu La ....A. H. Francke states that, "according to popular tradition," it was originally the foremost Bon monastery in Ladakh; its name means sauwastika and is a popular symbol in Bon for "eternity". .....Yungdrung is the name of the most popular school of Bon..... It is currently affiliated with the Drikung Kagyu school of Buddhism....Francke, A. H. (1977). A History of Ladakh. (Originally published as, A History of Western Tibet, (1907).

"Lamayuru......Yungdrung Tharpaling (g.yung drung thar pa gling), known today as Lamayuru, is the most ancient monastery of Ladakh.... LamaYuru, a vast monastery complex on a steep outcrop of earth..... Legend has it that the region where Yungdrung Tharpaling is situated today, approximately 127 km to the west of Leh, the capital of Ladakh, at the time of Buddha Shakyamuni was under a big lake, which was home to many Nagas. Rising prominently from the eastern part of the lake was a little dry hill which was locally called Skambur. It is said that the Arahat Madhyantika, when he visited the lake at Lamayuru and made water offerings to the Nagas, made a crack into the ground of the lake with his walking staff to leak out the water. He also pronounced the prophecy that in the future, the teachings of Sutra and Tantra unified will flourish in this place.."..... http://www.drikung.org/drikung-kagyu-lineage/main-monasteries/ladakh/lamayuru

"Mahasiddha Naropa (c. 1016–1100) visited Lamayuru coming from Zanskar...... He spent a long time in strict retreat in a cave there and turned the place into a sacred land. The cave still exists, well preserved and forms part of the main shrine of Lamayuru Monastery.......When Naropa was a great yogi, that he visited Kashmir. He came to Sani in Zanskar and to Lama Yuru in Ladakh.....at Sani the stupa here was built 2,500 years ago they say. It is called Kaniska or Sani Kaniska.....Guru Rinpoche came some 1300 years ago and mediated here establishing the cremation grounds and many springs. Then 1000 years ago came Naropa who meditated in front of the Kaniska Stupa."..... http://www.drikung.org/drikung-kagyu-lineage/main-monasteries/ladakh/lamayuru......http://naropa.edu/documents/programs/ma-environmental-leadership/footsteps.pdf

"Later in his life Naropa stayed in Phullahari, where he died aged 85 (c. 1040 AD)....One of the few reliable historical accounts of him comes from a Tibetan translator named Ngatso Lotsawa, who made an effort to visit Naropa at the monastery of Phullahari while waiting to visit with Atiśa at Vikramashila:......' I thought I would go see the Lord Naropa, since his reputation was so great.... On the day I arrived, they said some feudal prince had come to pay homage. So I went to the spot, and a great throne had been erected. I sat right in front of it. The whole crowd started buzzing, "The Lord is coming!" I looked and the Lord was physically quite corpulent, with his white hair [stained with henna] bright red, and a vermilion turban on. He was being carried [on a palanquin] by four men, and was chewing betel-leaf....So, there I saw the Lord's face, but did not actually hear his voice."......Davidson, Ronald M. Indian Esoteric Buddhism. pg 317. Columbia University Press, 2003.

"The Lamayuru monastery, which is around 125 kms away from Leh. During the Yuru Kabgyat Festival, the monks perform mask dances, prayers and rituals in order to get away from any kind of disaster and for bringing in peace in the world. This is a pre-historic monastery, which is called Yuru Gonpa by the locals. This festival is dedicated to Yuru Kabgyat and his mythical connection...The main objective behind this masked dance drama is to appease the deity.....The Yuru Kabgyat dance consists of Chams in which the Lamas dance in the form of circles with large colorful masks. This circular movement is often accompanied by drum beats, long pipes and cymbals. The masks are usually made from paper mache and there is also a thin coat of plaster enveloping it.....The main figures portrayed are the Yama or the Lord of Death and Padmasambhava..... At Lamayuru in Leh, this dance is a renowned dance drama which is held every year during the Yuru Kabgyat festival, (held around July –August.) This dance drama concludes with sacrificial offerings......http://www.lehladakhindia.com/festivals/yuru-kabgyat-festival/ 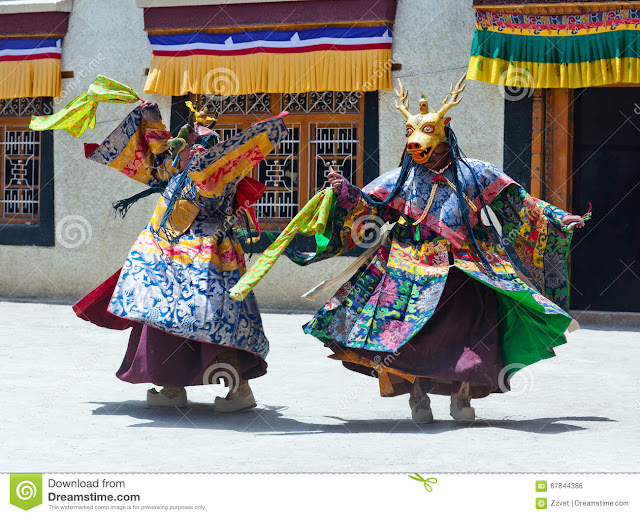 "Zanskar (“bzang-dkar”, meaning good (or beautiful) and white).......Zanskar, together with the neighbouring region of Ladakh, was briefly a part of the kingdom of Guge in Western Tibet......The majority of Zanskaris are of mixed Tibetan and Indo-European origins; notably Changpa, Dard and Mon.... It is suspected that an Indo-European population known as the Mon might then have lived in this region, before mixing with or being replaced by the next settlers, the Dards. Early Buddhism coming from Kashmir spread its influence in Zanskar, possibly as early as 200 BC. The earliest monuments date from the Kushan period. After this eastward propagation of Buddhism, Zanskar and large parts of the Western Himalaya were overrun in the 7th century by the Tibetans, who imposed their Bön religion.......Buddhism regained its influence over Zanskar in the 8th century when Tibet was also converted to this religion. Between the 10th and 11th centuries, two Royal Houses were founded in Zanskar, and the monasteries of Karsha and Phugtal (see picture) were built. Until the 15th century Zanskar existed as a more or less independent Buddhist Kingdom ruled by between two and four related royal families..".....Namgail, T. (2004). "Zangskar: mystic land". Sanctuary Asia 24: 44–47.

"Guge was an ancient kingdom in Western Tibet. The kingdom was centered in present-day Zanda County, Ngari Prefecture, Tibet Autonomous Region. At various points in history after the 10th century AD, the kingdom held sway over a vast area including south-eastern Zanskar, Upper Kinnaur district, and Spiti Valley, either by conquest or as tributaries. The ruins of the former capital of the Guge kingdom are located at Tsaparang in the Sutlej valley, not far from Mount Kailash and 1,200 miles (1,900 km) westwards from Lhasa.....Guge was founded in the 10th c. AD.....Nyi ma mgon, a great-grandson of Langdarma, the last monarch of the Tibetan Empire, established a kingdom in Ngari (West Tibet) in or after 912 ADand annexed Puhrang and Guge. He established his capital in Guge.....

Posted by OkarReview at 4:32 AM