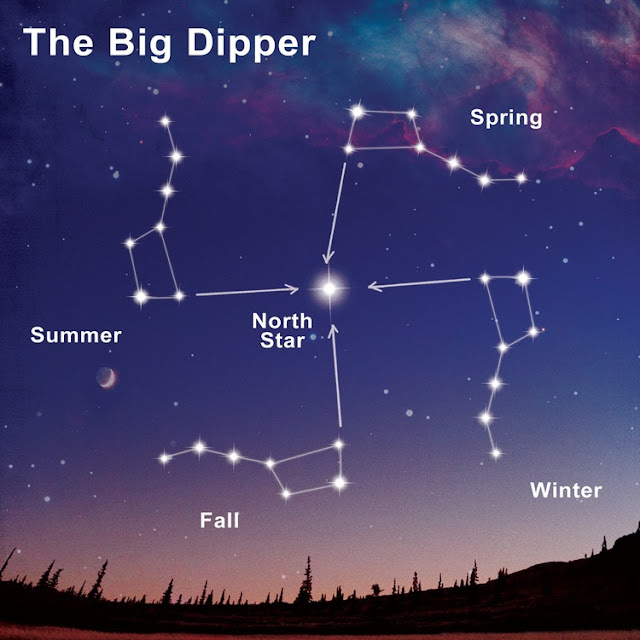 Drenpa Namkha holds a Yungdrung Chakshing in his right hand to indicate the indestructibility and permanence of the Bon teachings. 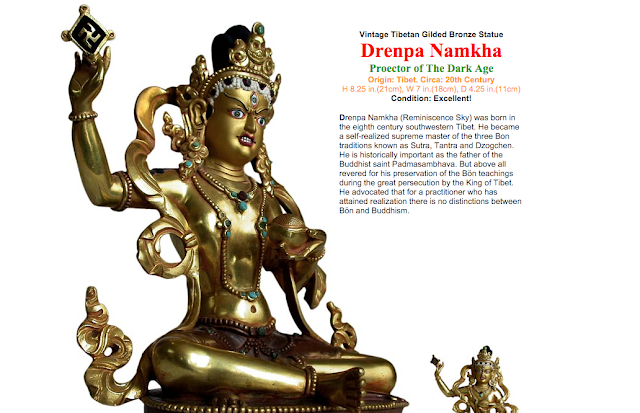 "Yungdrung Chakshing is a symbol of continuity and willpower in the Bon religion which its followers say was the pre-Buddhist faith of the Tibetan people. It's interesting to note that the swastika here is widdershins which is unlike the Hindu one....Widdershins is a term meaning to go counter-clockwise, or to walk around an object by always keeping it on the left.....The Swastika (also known as the gammadion cross, cross cramponnée, or wanzi) (as a character: 卐 or 卍) is an ancient religious symbol that generally takes the form of an equilateral cross, with its four legs bent at 90 degrees. It is considered to be a sacred and auspicious symbol in Hinduism, Buddhism, Bon and Jainism ....It has been used as a decorative element in various cultures since at least the Neolithic. It is known most widely as an important symbol long used in Indian religions, denoting "auspiciousness....The name swastika comes from the Sanskrit word svastika (Devanāgarī: स्वस्तिक), meaning "lucky or auspicious object".....The word finds its origin in Vedic Sanskrit. As noted by Monier-Williams in his Sanskrit-English dictionary, according to Alexander Cunningham, its shape represents a monogram formed by interlacing of the letters of the auspicious words su-astí (svasti) written in Ashokan characters."...... 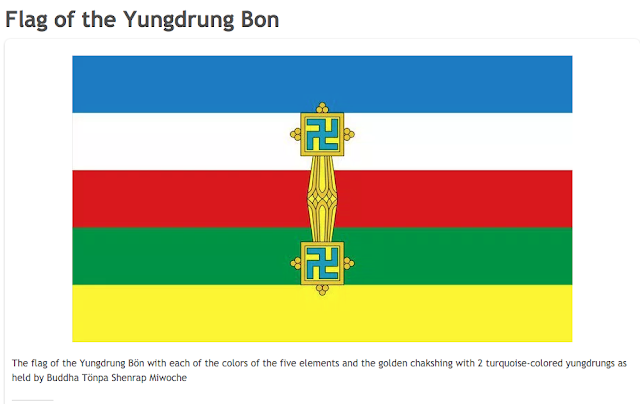 The flag of the Yungdrung Bön with each of the colors of the five elements and the golden chakshing with 2 turquoise-colored yungdrungs as held by Buddha Tönpa Shenrap Miwoche....http://ravencypresswood.com/2013/09/24/flag-of-the-yungdrung-bon/ 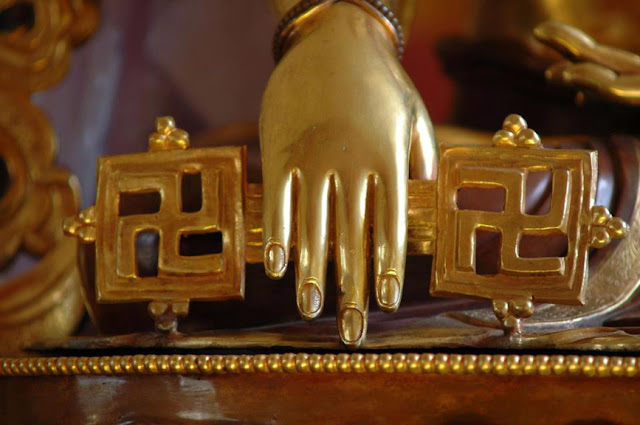 "The swastika, old symbol of good luck, is very present in bön and represents eternity, mostly in its anti-clockwise version......The flag has five horizontal stripes (blue, white, red, green, yellow). In the middle of the flag there is a golden yungdrung chakshing (g.yung-drung phyag-shing in Wylie transliteration), which is a bönpo scepter and symbol of immortality. On each end of the yungdrung there is a square with a swastika. The squares are shown with a blue swastika on yellow field in one instance, and with several colours between the arms of the yellow swastika in the other (blue to the left, red on top, green on the right, and white on the bottom), all on a red field within yellow border."........ Sources: http://blog.amdotibet.cn/tibetmonk/archives/103962.aspx ........http://ravencypresswood.com/2013/09/24/flag-of-the-yungdrung-bon/ .......Corentin Chamboredon, 10 February 2014........http://www.crwflags.com/fotw/flags/xt_bonpo.html

"Almost all of western Tibet constituted, before the Tibetan emperor Songtsen Gampo invaded it in the 8th c. AD, the kingdom of Zhangzhung..... Modern bönpo claim their religion had roots in this old country......some texts even claim bön was imported from old Persia to Zhangzhung before that.".....http://www.crwflags.com/fotw/flags/xt_bonpo.html 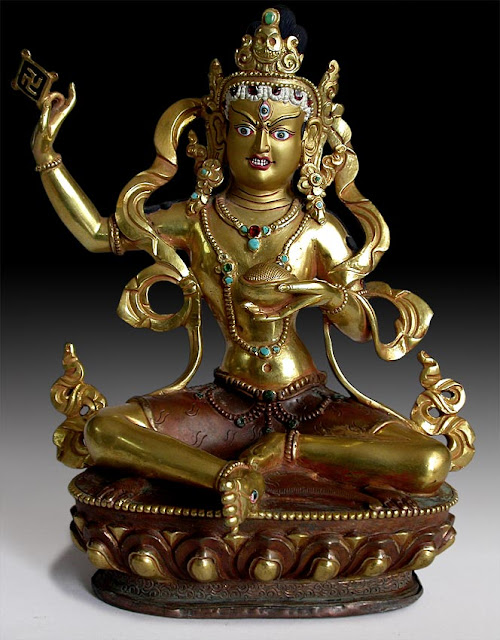 "A gleaming and spirited statue of Drenpa Namkha, the venerated long-life deity of Bön. He is regarded as the Protector of the Dark Age, and believed to be the all-embodying manifestation of the three kayas of Buddhas in Tibetan tradition. As shown in this rare bronze Drenpa Namkha as a Mahasiddha, he is seated in royal ease on a lotus throne wearing only a tiger skin. On his youthful face at the ajna chakra, he has a third-eye that revealed his transcendent knowledge. For his power to transform delusion into perfect wisdom, his left hand is holding a white kapala (skull cup) filled with blood. To affirm the absolute truth and eternal teachings of the Bön, his right hand is raised with the yungdrung chakshing (swastika vajra emblem). Whereas the one eye on his foot indicated that he could visualizes five hundred past lives. Beautifully gilded in gold and ornamented with semi-precious stones, with a swastika on a double-thunderbolt embossed on the copper base plate, this immaculate statue emanated the presence of Drenpa Namkha in an unshakeable equipoise.".....http://www.buddhamuseum.com/gilded-drenpa-namkha_93.html 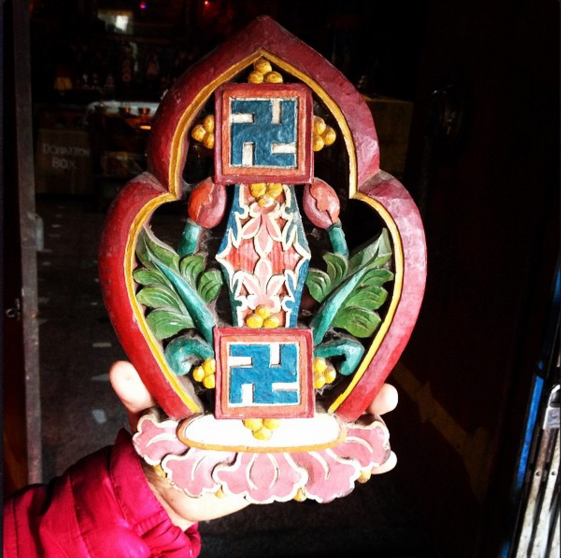 "Drenpa Namkha (Tibetan: dran pa nam mkha' ) was born in the 8th century near Mount Kailash in Chunlung Ngul Kha in south-western Tibet. As a young student he was a blessed with eight principal Bon teachers. Drenpa Namkha became a self-realized supreme master of the three Bon practices, known as Sutra, Tantra and Dzogchen. Drenpa Namkha is the primary long-life deity according to Bon....Drenpa Namkha's biography in eight volumes was published by sPa-tshang Sonam Gyantsan, Delhi in 1983. Drenpa Namkha is said to have had twin sons: Tshe-dbang Rig-'dzin, a Bon teacher, and Pad-ma 'Byung-gnas..." 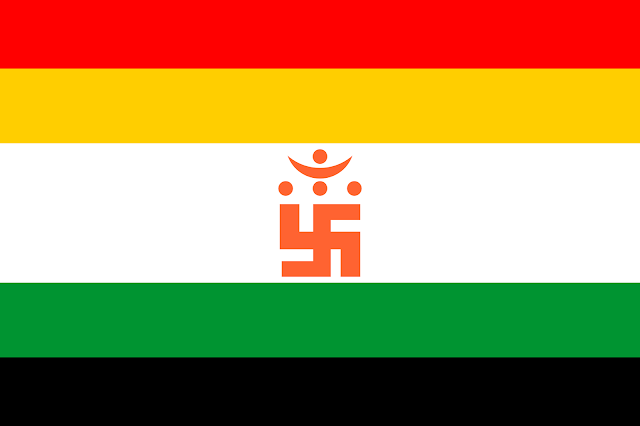 "The flag of Jainism was first mentioned in a holy text dating 5th century BC. It has five colors: orange or red, yellow, white, green and black or dark blue.....The swastika in the centre of the flag represents the four states of existence of soul. The four stages may be: heaven-beings or deities....human beings.....animal/birds/insects/plants.....hell beings.....It represents that the soul can embody any of these forms, owing to karma, which may escalate it to higher-level forms such as heavenly beings, or degrade it to lower-level forms such as lesser animals or hell beings....The three dots above the swastika represent the Ratnatraya (three jewels) of Jainism.....The curve above the three dots denotes Siddhashila, a place in the highest realms of Universe, composed of pure energy. It is above hell, earth, or heaven."..... 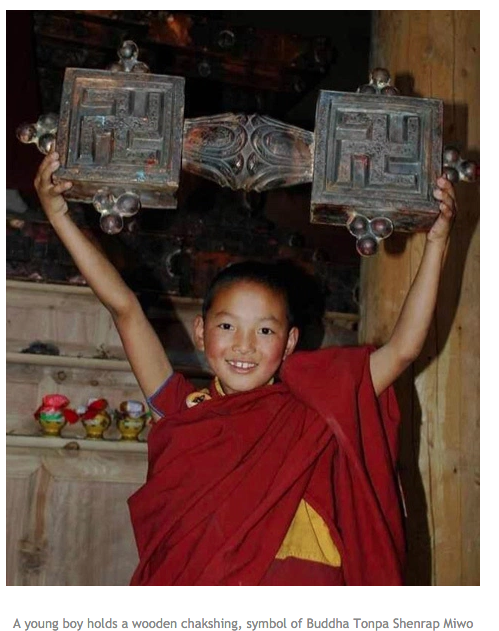