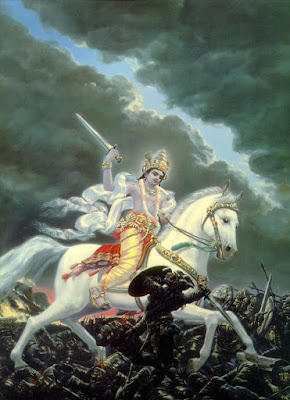 "Dabiq (Arabic: دابق‎) is the monthly magazine of ISIS......Dabiq is named after a town in northern Syria northeast of Aleppo. It lies around 10km (six miles) from the Turkish border....... In Islamic eschatology, it is believed that Dabiq is one of two possible locations for an epic battle of Armageddon between invading Christians and the defending Muslims which will result in a Muslim victory and mark the beginning of the end of the world..... The Islamic State believes Dabiq is where an epic and decisive battle will take place with Christian forces of the west......In Islamic eschatology as found in the Hadith, the area of Dabiq is mentioned as a place of some of the events of the Muslim Malahim (which would equate to the Christian apocalypse, or Armageddon.....The hadith further relates the subsequent Muslim victory, followed by the peaceful takeover of Constantinople with invocations of takbir and tasbih, and finally the defeat of Anti-Christ following the return and descent of Jesus Christ." 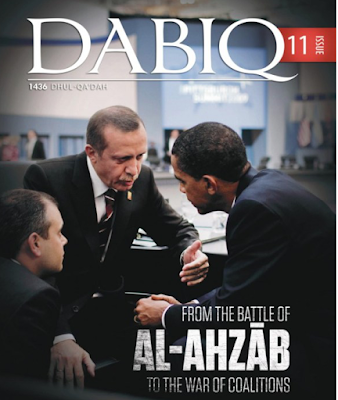 "An ancient prophecy romanticised by ISIS militants warns of a battle between an Islamic army and an 'infidel horde' in Syria which will herald the destruction of the world. The 1,300-year-old hadith, which is a report of the deeds, teachings and sayings of the Prophet Mohammed, refers to the 'horde' flying 80 banners as they take on a Muslim army in the Syrian town of Dabiq. It warns of a 'malahim' - the equivalent to Armageddon in Christian teachings – in which the Muslims ultimately prevail." .....http://www.dailymail.co.uk/news/article-2786039/ 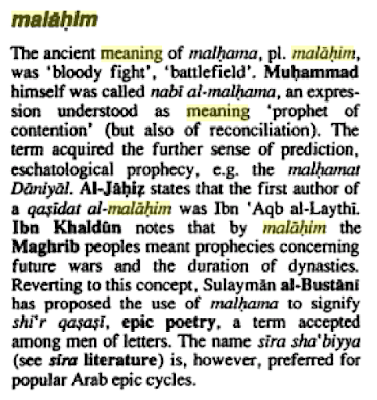 Armageddon....... "In the book of Revelation, armageddon is the last battle between good and evil before the Day of Judgment. Armageddon, a biblical hill of Megiddo, an archaeological site on the plain of Esdraelon, south of present-day Haifa in Israel.... the place where the last battle between good and evil will be fought.......the place of the gathering of armies for the final battle before the end of the world.....Late Latin Armagedōn, from Greek, from Hebrew har məgiddô, the mountain region of Megiddo : har, mountain; see hrr in Semitic roots + məgiddô, Megiddo. 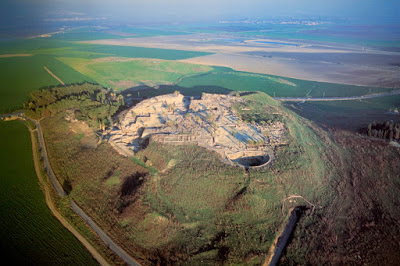 "Megiddo (Hebrew: מגידו‎; Arabic: مجیدو‎, Tell al-Mutesellim) is a tell in northern Israel near Kibbutz Megiddo, about 30 km south-east of Haifa, known for its historical, geographical, and theological importance, especially under its Greek name Armageddon. In ancient times Megiddo was an important city-state. Excavations have unearthed 26 layers of ruins, indicating a long period of settlement. Megiddo is strategically located at the head of a pass through the Carmel Ridge overlooking the Jezreel Valley from the west."

"......So far as I know there are two major Buddhist prophetic cycles that may be related to the 21st century: the 2,500 year Mappo Cycle and the Kalachakra prophecies......The word mappo (more correctly, mofa) derives from the Chinese 末法, meaning “the end of dharma,” and refers to the last of three ages, commencing with the death of the Buddha, estimated (according to current scholarship) to correspond to the year 405 BC. In the Mahasamnipata Sutra, the three periods are further divided into five five-hundred year periods, the fifth and last of which was prophesied to be a time when the Buddhism of Sakyamuni would lose all power of salvation and a new Buddha would appear to save the people. The three periods and the five five-hundred year periods are also described in the Sutra of the Great Assembly. This time period would be characterized by unrest, strife, famine, and other natural disasters. The final millenium and century of this 2,500 year cycle represents the nadir of the first 2,500 year cycle of historical Buddhism, and the arising of a new current. Descriptions of the three periods also appear in other sutras. Since the Buddha died about 400 BC, this means that the “new current” may be expected about 2100, corresponding very neatly both with the rise of the technological singularity (2045) and the future appearance of Shambhala according to the Kalachakra."......http://palisuttas.com/2012/05/11/buddhist-prophecies-of-the-21st-century/

"Mappō.....The Three Ages of Buddhism, also known as the Three Ages of the Dharma, (simplified Chinese: 三时; traditional Chinese: 三時; pinyin: Sān Shí) are three divisions of time following Buddha's passing. The Latter Day of the Law is the third and last of the Three Ages of Buddhism. Mappō or Mofa (Chinese: 末法; pinyin: Mò Fǎ, Japanese: Mappō), which is also translated as the Age of Dharma Decline, is the "degenerate" Third Age of Buddhism."...... in the Mahāsaṃnipāta Sutra, the three periods are divided into five five-hundred year periods, the fifth and last of which was prophesied to be when the Buddhism of Sakyamuni would lose all power of salvation and a new Buddha would appear to save the people. This time period would be characterized by unrest, strife, famine, and natural disasters."......Marra, Michele (1988). 'The development of mappō thought in Japan', Japanese Journal of Religious Studies 15

"The Kalachakra Verse......Verse I.154 from The Abridged Kalachakra Tantra reads:......."Adam, Noah, Abraham, and five others – Moses, Jesus, the White-Clad One, Muhammad, and Mahdi – with tamas, are in the asura-naga caste. The eighth will be the blinded one. The seventh will manifestly come to the city of Baghdad in the land of Mecca, (the place) in this world where a portion of the asura (caste) will have the form of the powerful, merciless mlecchas.....According to the Kalachakra texts, the prediction of the mleccha invasion was given by Manjushri Yashas in the second century BC. The prediction was that the invasion would be launched in 2424 AD, 1800 years after the founding of the invaders’ Dharma."

"Vajrayana Buddhism taught that its teaching would be popular when "iron birds are upon the sky" before its decline...... The Kalacakra tantra contains a prophecy of a holy war in which a Buddhist king will win.....The earliest source of Kalachakra teachings is 'A Concert of Names of Manjushri', in which Manjushri, the embodiment of the deep awareness (wisdom) of all the Buddhas, is identified with the Kalachakra Buddha-figure. It can be dated no later than the mid-eighth century AD."

"Some monks such as Dōgen (1200 – 1253 AD)and Hsu Yun had alternative views regarding dharma decline. Dōgen believed that there is no mappō while Hsu Yun thought mappō is not inevitable."

" Jesus ...aka: Isa Ibn Maryam (Arabic: عيسى بن مريم‎, translit. ʿĪsā ibn Maryām; English: Jesus, son of Mary), or Jesus in the New Testament, is considered to be a Messenger of God and al-Masih (the Messiah) in Islam, considered an Islamic prophet).....Like all prophets in Islam, Jesus is considered a Muslim.....He will similarly return to the earth after having disappeared. He will come to Damascus and pray at the side of Mahdi. Jesus, rather than Mahdi, will then defeat Dajjal. This battle, known as the apocalypse, will occur at Armageddon (Megiddo) in Palestine.After his victory, Jesus will abolish the poll tax on non-Muslim “people of the Book,” which means convert them all to Islam, and rule the earth in an Islamic golden age. The period of peace that will follow will last for forty years, after which Allah will destroy the earth, raise the dead, and enact the Last Judgment. The good shall go eternally to Heaven and the bad shall burn eternally in Hell...Jesus is unique for being the only prophet in Islam who neither married nor had any children......Muslims believe that Jesus will return to earth near the Day of Judgment to restore justice and to defeat al-Masih ad-Dajjal ("the false messiah", also known as the Antichrist)...... Jesus will not return as a new prophet; Muhammad was the final prophet, but will continue from where he left off at the time of his ascension. He will live for another forty years before dying a natural death........"....https://en.wikipedia.org/wiki/Jesus_in_Islam

"End time (also called end of time, end of days, last days, final days, or eschaton) is a time period described in the eschatologies of the dominant world religions, both Abrahamic and non-Abrahamic..... In Islam, the Day of Judgement is preceded by the appearance of the Mahdi atop a white stallion. With the help of Isa (Jesus), the Mahdi will blow the triumph overMasih ad-Dajjal (the false messiah).......Non-Abrahamic faiths tend to have more cyclical world-views, with end-time eschatologies characterized by decay, redemption and rebirth. In Hinduism, end time is foretold as when Kalki, the final incarnation of Vishnu, descends atop a white horse and brings an end to the current Kali Yuga. In Buddhism, the Buddha predicted that his teachings would be forgotten after 5,000 years, followed by turmoil. A bodhisattva named Maitreya will appear and rediscover the teaching of dharma. The ultimate destruction of the world will then come through seven suns.".....https://en.wikipedia.org/wiki/End_time

"In the year 2327 AD— the prophecies of the Kalachakra Tantra tell us — the 25th Kalki will ascend the throne of Shambhala. He goes by the name of Rudra Chakrin, the “wrathful wheel turner” or the “Fury with the wheel”. The mission of this ruler is to destroy the “enemies of the Buddhist teaching” in a huge eschatological battle and to found a golden age. This militant hope for the future still today occupies the minds of many Tibetans and Mongolians and is beginning to spread across the whole world.....Mounted upon his white horse, with a spear in his hand, the Rudra Chakrin shall lead his powerful army in the 24th century. “The Lord of the Gods”, it is said of him in the Kalachakra Tantra, “ joined with the twelve lords shall go to destroy the barbarians” (Newman, 1987, p. 645). ".....http://www.trimondi.de/SDLE/Part-1-10.htm

"Mohammed's Ascension......n the year 621, at the age of 51 years old, He flew on the magical Winged-Horse of Fire which he called Burak, which literally means White Horse but seen as "Thunder-Lightning". "....http://www.allaboutturkey.com/muhammed.htm

"Christ on a White Horse.....Revelation 19:11 ......Now I saw heaven opened, and behold, a white horse. And He who sat on him was called Faithful and True, and in righteousness He judges and makes war. His eyes were like a flame of fire, and on His head were many crowns. He had[a] a name written that no one knew except Himself. He was clothed with a robe dipped in blood, and His name is called The Word of God. And the armies in heaven, clothed in fine linen, white and clean, followed Him on white horses. Now out of His mouth goes a sharp sword, that with it He should strike the nations. And He Himself will rule them with a rod of iron. He Himself treads the winepress of the fierceness and wrath of Almighty God. And He has on His robe and on His thigh a name written: KING OF KINGS AND LORD OF LORDS......".....https://www.biblegateway.com