Aq Kupruk, Balkh...."Over 20,000 stone tools are reported to have been recovered from a site just north of Aq Kupruk/Kopruk township and some 77 km south of Mazar-e Sharif, Balkh Province. Aq Kupruk sits on the banks of the Balkh River where it leaves the foothills of the Paropamisus. .....The Aq Kupruk site is also called Dukhtar-e Padshah. Excavations at the site have yielded artifacts from various levels. Some writers have remarked on the relative sophistication of the stone tools calling Aq Kupruk's artisans "the Michelangelos of the Upper Paleolithic." One of the artifacts recovered is the carved the face of a person on a small limestone pebble - one of the earliest representations of a human face made by a human hand as portable cave art. The artifact has been dated to 18,000 BC....The age of the various levels and their associated artifacts recovered from the four site range from the Upper Paleolithic (18,000-10,000 BCE) to the Iron Age. The finds include incised spatulas, points, and awls made of bone, and a flint toolkit: blades, cores, utilized and retouched side- and end- scrapers, burins, keeled scrapers, points, a micro-industry, combination tools, a very early stone sculpture (the pebble face), domesticated sheep and goat remains, fragments of beaten copper from the ceramic Neolithic period, several projectile points, glass, terracotta and simple jewellery. ".....http://www.heritageinstitute.com/zoroastrianism/prehistoricsites/dawn.htm 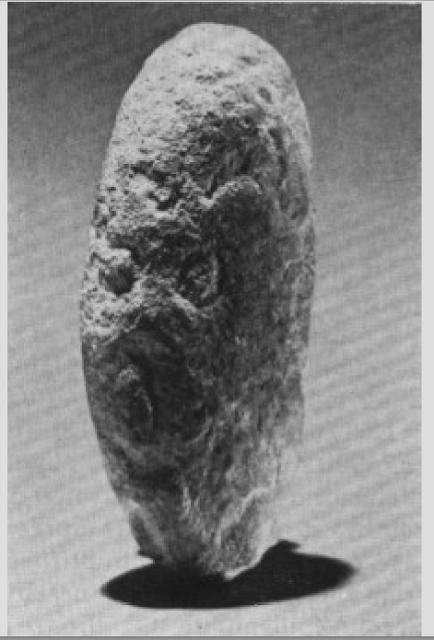 Sculpted head from Aq Kupruk, northern Afghanistan, circa 20,000 BC - the carved the face of a person on a small limestone pebble - one of the earliest representations of a human face made by a human hand as portable cave art.

"North Afghanistan may well be the zone where modern Homo sapiens, or at least a variety of modern man, developed physically and began to revolutionize Stone Age technology,” said University of Pennsylvania archaeologist Louis Dupree of the Darra-i Kul discovery. But the 1979 Soviet invasion ended the excavation that might have confirmed this startling hypothesis. .....Across northern Afghanistan, from Balkh to the Pakistan border, lay the evidence of vibrant Stone Age, Neolithic and early Bronze Age cultures. A rock shelter at Kara Kamar, 14 miles north of Samangan yielded Stone Age tools dating circa 30,000 BC. More than 20,000 stone tools excavated from Aq Kupruk are of such sophistication that archaeologists often refer to the tool makers of Aq Kupruk as "the Michelangelos of the Upper Palaeolithic."......Aq Kupruk artifacts belong to a cultural phase that lasted some 5,000 years, from circa 20,000 to 15,000 years ago, during which some unknown artist carved the face of a man (or is it a woman?) on a small limestone pebble — giving us one of the earliest representations of a human face made by human hand."...... http://www.cemml.colostate.edu/cultural/09476/afgh02-02enl.html

"There are four sites in the vicinity of Aq Kupruk:
Aq Kupruk I or Ghar-e Asb (aka: Horse Cave) is a cave/rock shelter of the Kushan-Sasanian period, containing some fragmentary Buddhist frescos and some simple architecture.
Aq Kupruk II or Ghar-e Mar (aka: Snake Cave) is cave/another rock shelter that has yielded the largest number of artifacts from among the three sites and dating to several periods except the Kushan-Sasanian period. About 10% of the site has been excavated.
Aq Kupruk III is an open air site on the river terrace. Its artifacts date to the Mesolithic/EpiPaleolithic period (10-15,000 years ago).
Aq Kupruk IV (Skull Cave)....is closer to the modern village. Its artifacts include those dated to the Upper Paleolithic (15,000 years +).
....http://www.heritageinstitute.com/zoroastrianism/prehistoricsites/dawn.htm

"....the Aq Kupruk carving remains one of the oldest known human likenesses ever discovered. Why was it carved? We may never know. ....Early peasant farms dating circa 30,000 – 20,000 BC, found at Hazar Sum and in the foothills of the Hindu Kush, confirm that North Afghanistan was one of the earliest places to domestic plants and animals. Later still, farming villages, dating 7,000-5,000 BC, near Deh Morasi Ghundai, show the transition that allowed faming villages to emerge and small cities to follow. By this time, evidence of Bronze Age culture abounds. .......While much has been looted and is forever lost, much has been discovered, and much more awaits excavation, at sites such as the Dashli Oasis."......http://www.cemml.colostate.edu/cultural/09476/afgh02-02enl.html 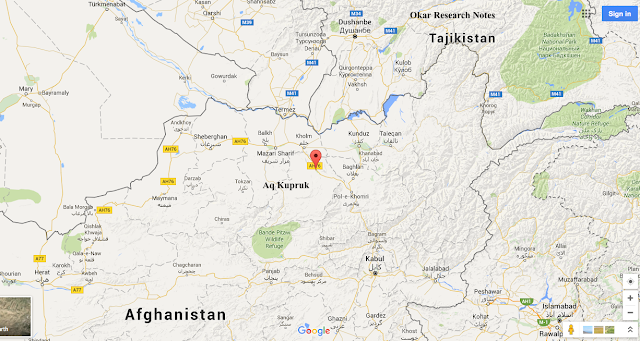 "After 2400 BC, throughout Central Asia the growth of urban societies was severely challenged. Within a span of some three hundred years, none of the major centers that developed during the first half of the 3rd millennium were still occupied. The precise reasons for this "urban collapse" remain a mystery. Yet toward the end of 3rd millennium, across northern Afghanistan and southern Turkemenistan and Uzbekistan, a series of events fueled the rise of cities and settlements that was to have a major impact......Large numbers of nomadic invaders or migrants, pastoral citiless people travelling on horseback and by chariot, long known (conveniently, perhaps wrongly) as Aryans (derived from the Sanskrit word for "nobles"), migrated from the Caspian Sea region across the Oxus (present-day Amu Darya) River to present-day Afghanistan during the late early 2nd millennium (by circa 1700 BC).......No contemporaneous record exists of the Aryans' journey. But according to legend, they sang hymns as they travelled that were passed on by word of mouth from one generation of priests to another until c. 1200 BC, when the hymns were added to a collection of volumes known as the Rig Veda (1700-1100 BC). .....In these texts, we read about a tribe, centuries earlier, emerging from the Hindy Kush and crossing the Kubha, or Kabul, River around 1,500 BC, and can almost visualize these nomadic wanderers putting the Central Asian vastness behind them. ......Though evidence remains slim, some of the Aryan migrants appear to have stopped their wandering and settled in Afghanistan, while others continued south toward the India subcontinent. Meanwhile, a third branch of the Aryan Migration turned westward and settled on the Iranian plateau, in a place called Ariana, where an unknown scribe, or scribes, around 1800 BC produced the Persian hymns known as the Avesta, which mentions a city in northern Afghanistan termed Bakhdi (Balkh) "beautiful, crowned with banners.” .......http://www.cemml.colostate.edu/cultural/09476/afgh02-02enl.html 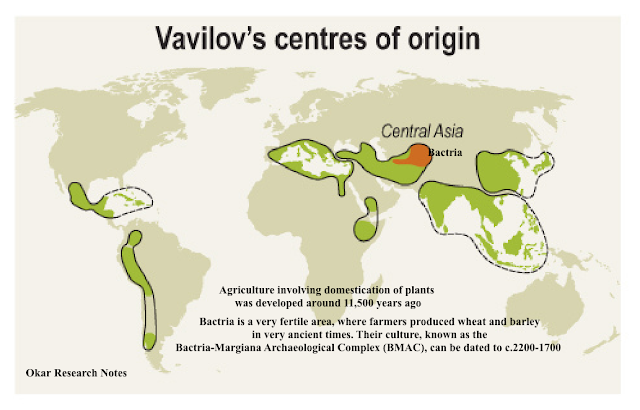 "AAN’s Thomas Ruttig, points out that northern Afghanistan is part of a ‘Vavilov Centres’, one of eight regions of the world where crop plants were first domesticated. For plant breeders, having access to the wild relatives and related species of a crop is important. The plant crops domesticated here include wheat, peas, lentils, chickpeas, sesame, hemp, onion, garlic, spinach, carrot, pistachio, pear, almond, grape and apple.....Vavilov developed a theory on the centers of origin of cultivated plants. He stated that plants were not domesticated somewhere in the world at random but there are regions where the domestication started. The center of origin is also considered the center of diversity....The center of origin (or centre of origin) is a geographical area where a group of organisms, either domesticated or wild, first developed its distinctive properties.".....https://www.afghanistan-analysts.org/plants-of-afghanistan-1-centre-of-global-biodiversity/

"The Bronze Age occurred roughly between 3000 BC and 2500 BC. The previous millennium had seen the emergence of advanced, urbanized civilizations, new bronze metallurgy extending the productivity of agricultural work, and highly developed ways of communication in the form of writing......an increasing amount of evidence supports the hypothesis that horses were domesticated in the Eurasian Steppes approximately 4000–3500 BC...... 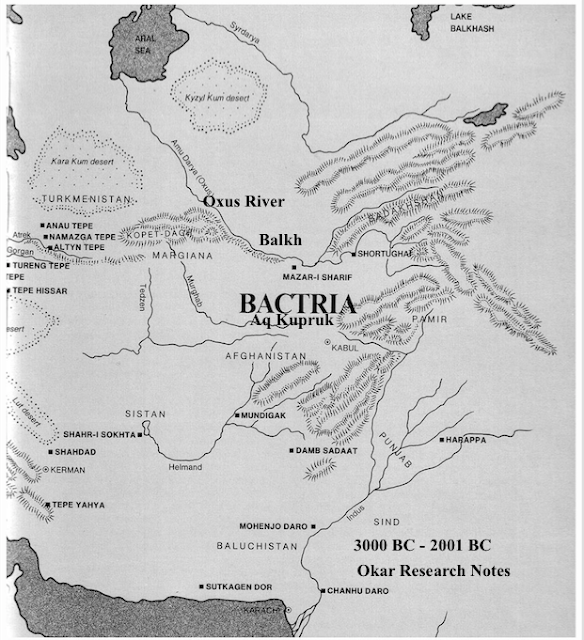