"The Turkishahiya dynasty continued to rule over Kabul and Gandhara up until the advent of the Saffarids in the ninth century. Forced by the inevitable advance of Islam on the west, they then moved their capital from Kapisa to Wahund ((Vaihind, Udabhanda, Udabhandapura, Ohind, Und), near Peshawar) , whence they contin­ued as the Hindushahiya dynasty. This was in 870 A.D. and marks the first time that the Kingdom of Shambhala actually came under Moslem domination."

" In 642 A.D., a "King Ta-mo-yin-t'o-ho-szu" of Uddiyana is said to have sent a gift of camphor and an embassy to the Emperor of China. This is the year that the Arabs succeeded in defeating the King of Kings, Yazdagird 111, of Persia. The latter, fleeing eastward, met his death near Merv in 651. With the death of Yazdagird, last of the Sassanid dynasty, the southern bedouin hordes of Islam for the first time marched onto the soil of Iran and began their great, rapacious advance eastward. The kings of the Orient had cause to fear the coming of the Arabs. These southerners were savagely barbarian; a patchwork of desert tribes woven together by the threads of a fanatical monotheism and a religion which encouraged them to slay with the sword those whom they could not convert to their personal dominion. " Fight those who do not believe in Allah and the Last Day," says the Koran (Sura 9:29), " ...until they pay you tribute out of hand, having brought them low."
The inexorable expansion of the Arabs spread along two fronts: the first moved through Nishapur to Herat, Merv and Balkh, reducing the northern provinces of Persia; the second passed south by way of Sistan (Sijistan) to the Helmand. In 650 Abdallah ibn Amr began the yet further push forwards across the desert of the Dasht-i-Lut. He was followed over the years by succeeding Moslem armies which, through continuous raids, massacres and looting, systematically transformed the wondrous flower-garden of Persian civilization and Mazdean or Buddhist culture into a scorched wasteland. Today all these lands lie under the yoke of Arabic culture.
The Turkish Shahi kingdom of Kapisa (with Kabul on the south as its capital) and the central Afghan massif of Ghor (now the Hazarajat), held against the invader, and for many centuries remained unconquered and primarily Buddhist. In 663 A.D. Ibn Samurah fought his way into Kabul, but his success was only temporary. Nevertheless, reading the T'ang Annals, we note that a party of Uddiyanean ambassadors presented themselves at the Chinese Court in 665 A.D., and granting the length and hardships of the journey, it is practical to assume that the embassy's presence was a direct response to Ibn Samurah's raid. Kapisa's strength, backed by the armies of Imperial China, acted as a major bulwark against Islam penetrating the Pamir, and significantly protected Uddiyana.
In 672 an Arab governor of Sistan, Abbad ibn Ziyad, raided the frontier of Al-Hind and crossed the desert to Gandhara, but quickly retreated again. The marauder Obaidallah crossed the Sita River and made a raid on Kabul in 698 only to meet with defeat and humiliation. Vincent Smith, in Early History of India, states that the Turkishahiya dynasty continued to rule over Kabul and Gandhara up until the advent of the Saffarids in the ninth century. Forced by the inevitable advance of Islam on the west, they then moved their capital from Kapisa to Wahund on the Indus, whence they contin­ued as the Hindushahiya dynasty. This was in 870 A.D. and marks the first time that the Kingdom of Shambhala actually came under Moslem domination. The Hindushahis recaptured Kabul and the rest of their Kingdom after the death of the conqueror Yaqub but never again maintained Kapisa as their capital."
......Robin Artisson......October 5, 2014........From a History of Uddiyana and the life of Padmasambhava

"The Shahi (Devanagari: शाही), Sahi, also called Shahiya or Hindu Shahi dynasties ruled one of the Middle kingdoms of India which included portions of the Kabulistan and the old province of Gandhara (now in northern Pakistan), from the decline of the Kushan Empire in the 3rd century to the early 9th century..... The kingdom was known as "Kabul Shahi" (Kabul-shāhān or Ratbél-shāhān in Persian کابلشاهان یا رتبیل شاهان) between 565 and 879 AD when they had Kapisa and Kabul as their capitals, and later as Hindu Shahi.....The Shahis of Kabul/Gandhara are generally divided into the two eras of the so-called Buddhist-Shahis and the so-called Hindu-Shahis, with the change-over thought to have occurred sometime around AD 870.".....http://en.wikipedia.org/wiki/Kabul_Shahi 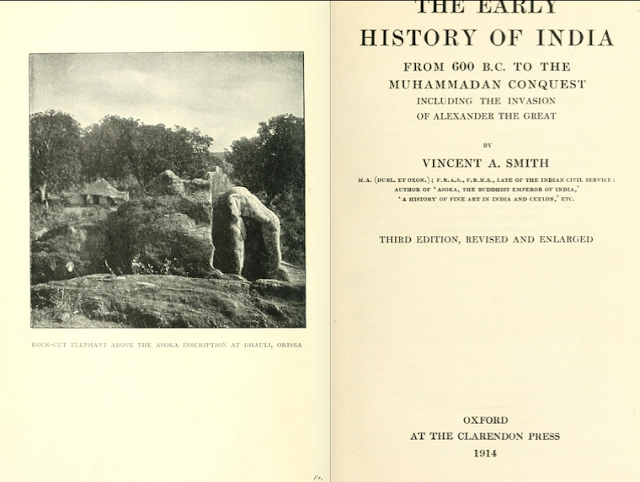 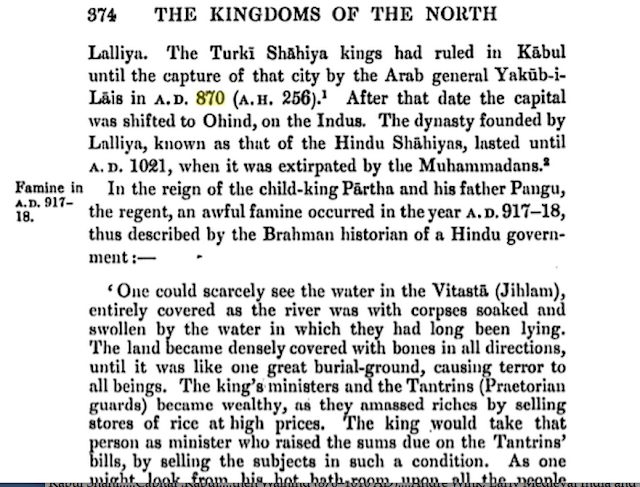 https://archive.org/details/earlyhistoryofin00smit......The early history of India from 600 B.C. to the Muhammadan conquest, including the invasion of Alexander the Great.....by Smith, Vincent Arthur, 1848-1920

"TurkI Shahiya kings had ruled in Kabul until the capture of that city by the Arab general, Yakub-i- Lais in 870 AD......After that date the capital was shifted to Ohind, (Waihind).....on the Indus."

"Anandapala or Anantpala was the third and last ruler of the Kabul Shahi dynasty in what is now Pakistan. His reign began in 1001 CE and ended in or about 1010. He was the son of Jayapala, whose kingdom used to stretch from Laghman to Kashmir and Sirhind to Multan, with Peshawar being in the center."

"In AD 671 when Muslim armies seized Kabul then the capital was moved to Udabhandapura, Modern day Und near modern Attock, also called Waihind by Al Biruni (André Wink p 125), where they became known as the Rajas of Hindustan or Hindu Shahi. Udabhanda was the capital of the Shahi dynasty......In the wake of Muslim invasions of Kabul and Kapisa in second half of 7th century (AD 664), the Kapisa/Kabul ruler called by Muslim writers Kabul Shahi (Shahi of Kabul) made an appeal to the Kshatriyas of the Hind who had gathered there in large numbers for assistance and drove out the Muslim invaders as far as Bost.....This king of Kapisa/Kabul who faced the Muslim invasion was undoubtedly a Kshatriya." ....http://www.jatland.com/home/Waihind

"The Sanskrit term kshatriya is used in the context of Vedic society wherein members organized themselves into four classes: brahmin, kshatriya, vaishya and shudra. Traditionally, the kshatriya constituted the ruling and military elite. Their role was to protect society by fighting in wartime and governing in peacetime....Gautama Buddha was born into a kshatriya family."

"Gesar.....Numismatic evidence and some accounts speak of a Bactrian ruler Phrom-kesar, specifically in the Turkish dynasty in Gandhāra, which was ruled by a Turkish Phrom-kesar ("Caesar of Rome"), who was father-in-law of the king of Khotan, around the middle of the 8th century AD."....http://en.wikipedia.org/wiki/Epic_of_King_Gesar

"In 645 AD, when Chinese pilgrim Hiuen Tsang was passing through the Uttarapatha..... Udabhanda or Udabhandapura was the place of residence or secondary capital of emperor of Kapisa which then dominated over 10 neighboring states comprising Lampaka, Nagara, Gandhara and Varna (Bannu) and probably also Jaguda....... About Gandhara, the pilgrim says that its capital was Purushapura; the royal family was extinct and country was subject to Kapisa; the towns and villages were desolate and the inhabitants were very few. It seems that under pressure from Arabs in the southwest and the Turks in the north, the kings of Kapisa had left their western possessions in the hands of their viceroys and made Udabhanda their principal seat of residence...... The reason why Udabhandapura was selected in preference to Peshawar is at present unknown but it is possible that the new city of Udabhanda was built by Kapisa rulers for strategic reasons.....http://www.jatland.com/home/Waihind

"Ya'qub ibn al-Layth al-Saffar (يعقوب بن الليث الصفار), or Ya'qub-i Laith Saffari (یعقوب لیث صفاری), born Rādmān pūr-i Māhak (Persian: رادمان پور ماهک‎) (October 25, 840 – June 5, 879), a Persian coppersmith, was the founder of the Saffarid dynasty of Sistan, with its capital at Zaranj (a city now in south-western Afghanistan). He ruled territories that are now in Iran and Afghanistan, as well as portions of western Pakistan and a small part of Iraq......By the time of Ya'qub's death, he had conquered the Kabul Valley, Sindh, Tocharistan, Makran (Balochistan), Kerman, Fars, Khorasan, and nearly reached Baghdad but then suffered a defeat by the Abbasids.....The Saffarid empire did not last long after Ya'qub's death."

From Ameera on the Sutledge River, in the Ferozepoor District, through the Hukra Nawal or Wahund Depression, to Kundawalee.......The Journal of the Royal Geographical Society of London, Volume 42

Sutlej (sŭt`lĕj), longest of the five rivers of the Punjab , c.900 mi (1,450 km) long, rising in the Kailas Range, SW Tibet region of China, and flowing generally west, meandering through the Himalayas in India, then onto the Punjab plain where it receives the Beas River and forms part of the India-Pakistan border; continuing into Pakistan, it is joined by the Chenab River (which received the Jhelum and Ravi rivers). The combined stream, the Panjnad, channels the collected waters of all five rivers of the Punjab into the Indus River. 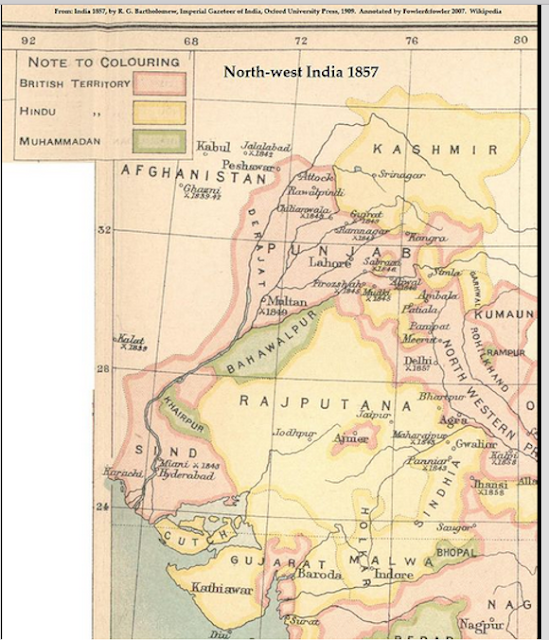 Bahawalpur was a princely state, currently part of Punjab province, stretching along the southern bank of the Sutlej and Indus Rivers, with its capital city at Bahawalpur. ....http://en.wikipedia.org/wiki/Bahawalpur_%28princely_state%29#/media/File:NWIndia_1857_imperial_gazeteer.jpg

"The Hakra is the dried-out channel of a river near Fort Abbas City in Pakistan that is the continuation of the Ghaggar River in India. Several times, but not continuously, it carried the water of the Sutlej and Sarasvati during the Bronze Age period. Many settlements of the Indus Valley Civilisation have been found along and inside the river beds of the Ghaggar and Hakra rivers......According to some paleo-environmental scientists and Archaeologists, between 2500 BCE and 1900 BCE some tectonic disturbances caused a tilt in topography of Northwest India resulting in the migration of river. The Sutlej moved westward and became a tributary of the Indus River while the Yamuna moved eastward and became a tributary of the Ganges. The Yamuna shifted its course eastwards, supposedly in the early 2nd millennium BCE, allegedly reaching its current bed by 1st millennium BCE, while the Drishadvati bed retained only a small seasonal flow. The Sutlej shifted its channel northwards repeatedly, and was eventually captured by the Indus system. The water loss due to these movements caused the Sarasvati river to dry up in the Thar Desert."......http://en.wikipedia.org/wiki/Ghaggar Hakra_River#Hakra_River

"The name "Khorasan" is derived from Middle Persian khwar (meaning "sun") and āsān (or ayan literally meaning "to come" or "coming" or "about to come"), hence meaning "land where the sun rises"...... http://en.wikipedia.org/wiki/Greater_Khorasan