"Rostam or Rustam (Persian: رُستَم‎, ) is the epic hero of the Persian epic Shahnameh in Persian mythology, and son of Zal and Rudaba. In the story, Rostam and his predecessors were natives of Zabol, the city in Zabulistan region of Sistan province in (present-day eastern Iran). Rostam's mother Rudaba was a princess of Kabul......Rostam was always represented as the mightiest of Iranian paladins (holy warriors), and the atmosphere of the episodes in which he features is strongly reminiscent of the Parthian period. He was immortalized by the 10th-century Persian poet Ferdowsi in the Shahnameh, or Epic of Kings, which contains pre-Islamic Iranian folklore and history." 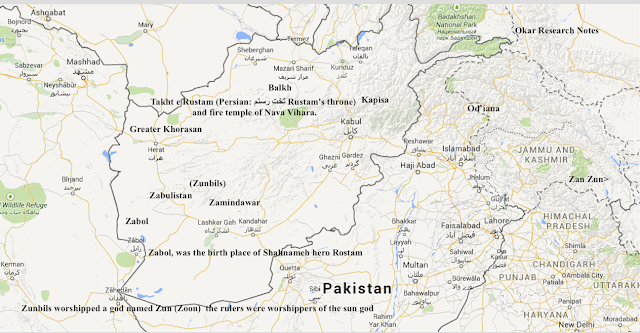 "In Ferdowsi's Shahnameh, Rostam is a native of Zabol, part of the Zabulistan region of Khorasan which is in present-day eastern Iran. His mother Rudaba was a princess of Kabul. Rostam is the champion of champions and is involved in numerous stories, constituting some of the most popular (and arguably some of most masterfully created) parts of the Shahnameh. In Shahnameh, Rostam - like his grandfather Sam, son of Nariman - works as both a faithful military general as well as king-maker for the Kayanian dynasty of Persia." 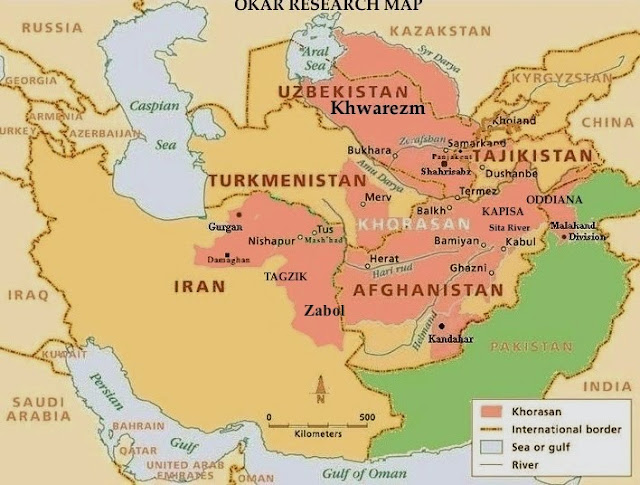 "Kayanian dynasty......The Kianian, also Kias or Kianids or Kaianids or kiani, are a dynasty of Iranian tradition and folklore. Considered collectively, the Kianian kings are the heroes of the Avesta, the sacred texts of Zoroastrianism, and of the Shahnameh, Iran's national epic....The Kayanian dynasty is particularly noteworthy in Zoroastrian history since it was during the reign of a Kayanian king, King Vishtasp (later called Gushtasp) that Zarathushtra preached. King Vishtasp was also Zarathushtra's first patron king..".....http://heritageinstitute.com/zoroastrianism/legendary/index.htm#kayanian 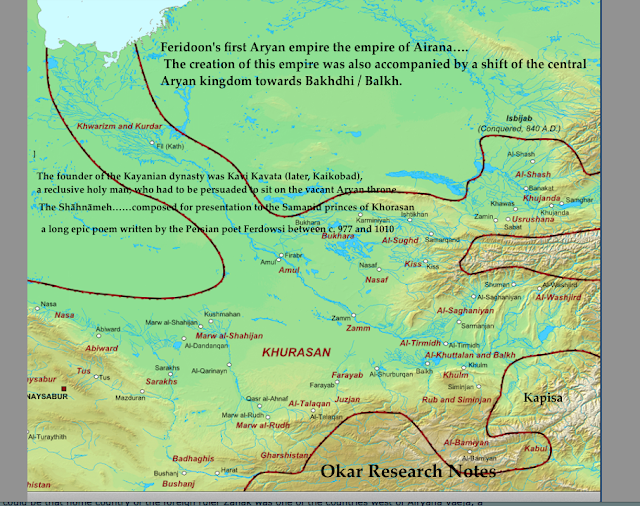 "Sām....also transliterated Saam is a mythical hero of ancient Persia, and an important character in the Shahnameh epic. He was the son of Nariman, grandson of Garshasp and father to Zāl. He was Iran's champion during the rule of Fereydun, Manuchehr and Nowzar. He was appointed by Manuchehr to rule Zabulistan (Sistan), and then Mazandaran. After Manuchehr, because of Nowzar's corrupted and failed rulership, Iranian champions asked Sām to rule Iran. Sām didn't accept, he supported Nowzar and advised him to follow Fereydun and Manuchehr. Sām returned to Mazandaran, and died soon after that. Afrasiab then attacked Zabulistan." 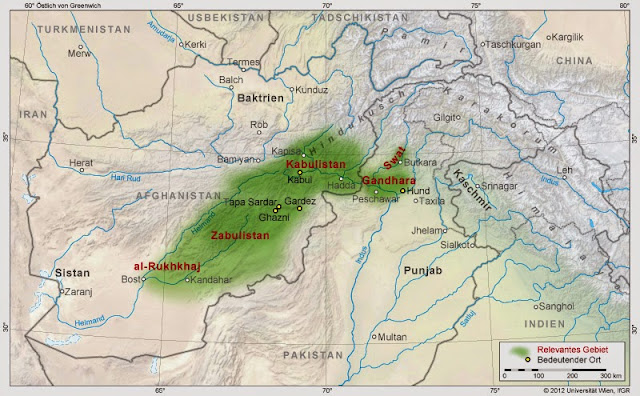 "Zabulistan (Persian/Pashto: زابلستان; Zabul + -stan), originally known as "Zavolistan", is a historical region based around today's Zabul Province in southern Afghanistan. Zabulistan translates to "land of Zabul" or "land of the Zabuls". The name "Zabuls" is probably a transliteration of Zunbils, a Hindu and Buddhist dynasty that ruled the area during the Islamic conquest of Afghanistan.....the territory south of the Hindu Kush between Kandahar and Ghazni is generally known as Zabulistan. According to Persian mythology, city of Zabol, was the birth place of Iranian hero Rostam....From the 7th century to 11th century, the region was ruled by Shahi kings.."

"In southern and eastern Afghanistan, the regions of Zamindawar (Zamin I Datbar or land of the justice giver, the classical Archosia) and Zabulistan or Zabul (Jabala, Kapisha, Kia pi shi) and Kabul, the Arabs were effectively opposed for more than two centuries, from 643 to 870 AD, by the indigenous rulers the Zunbils and the related Kabul-Shahs of the dynasty which became known as the Buddhist-Shahi.".....Al-Hind: The Making of the Indo-Islamic World By André Wink (2002)

"Zunbil, also written as Zhunbil, was a dynasty south of the Hindu Kush in southern Afghanistan. They ruled from the early 7th century until the Islamic conquest of Afghanistan in 870 AD. The Zunbils are believed to be an offspring of the southern-Hephthalite rulers of Zabulistan. The dynasty was related to the Kabul Shahis of the northeast in Kabul. "It follows from Huei-ch'ao's report that Barhatakin had two sons: one who ruled from after him in Kapisa-Gandhara and another who became king of Zabul"........The Zunbils worshipped a god named Zun (Zoon) from which they derived their name. Their territory included between what is now the city of Zaranj in southwestern Afghanistan and Kabulistan in the northeast, with Zamindawar and Ghazni serving as their capitals.....Although the rulers of the Zunbil dynasty were worshippers of the sun god in Hinduism, many inhabitants under the rule of the dynasty practiced Buddhism, Zoroastrianism, and other ancient religions before the Islamization of the region. The title Zunbil can be traced back to the Middle-Persian original Zūn-dātbar, 'Zun the Justice-giver'. The geographical name Zamindawar would also reflect this, from Middle Persian 'Zamin-i dātbar' (Land of the Justice-giver)."...."The Temple of Zoor or Zoon in Zamindawar". Abdul Hai Habibi. 1969.

"Zamindawar is a historical district of Afghanistan, situated on the right bank of the Helmand River to the northwest of Kandahar, bordering the road which leads from Kandahar to Herat via Farah. The historic region of Zamindawar is located in the greater territory of northern Helmand and encompasses the approximate area of modern day Baghran, Musa Qala, Naw Zad, Kajaki and Sangin districts. It was a district of hills, and of wide, well populated, and fertile valleys watered by important tributaries of the Helmand. The principal town was Musa Qala, which stands on the banks of a river of the same name, about 60 m, north of Girishk........Zunbils ruled Zamindawar before Islamization of the area. The title Zunbil can be traced back to the Middle-Persian original Zūn-dātbar, 'Zun the Justice-giver'.....The geographical name Zamindawar would also reflect this, from Middle-Persian 'Zamin-i dātbar' (Land of the Justice-giver)....."

"Kabulistan or Kamboja was the land of tribalism. Most people assume that Kamboj is a tribe of some sort. In fact its nothing more than a region state and at time an empire of ruling vast areas outside kabulistan proper. The tribes of ancient Kamboj are still the same tribes of modern Kabulistan perhaps might of assimilated into Islamic sharia law. Once again to conclude like many regions of Aryana, Kabulistan was too originally a tribalistic society. Although one might say even during the Hunduism domination in Kabulistan (500 BCE-500 AD) Kabulistan was still tribalistic. Despite the fact that majority of hindu society or Hinduism itself rejects tribalism and promotes Brahman Casteism nevertheless Kabulistan survived was still tribal nation and customary practice that left its signs during the Islamic era as well......The original tribes of Kabul were Asvakayan with many clans and sub-tribes, however in the state of Kamboja which is controlled by Kabul there are many other tribes as well such as Vahalka (Bahalka) and Rishis or Rishikas to the North to the south the Ashaka , Asvaka and other Kshatriyas etc. As years pass we witness Achaemenid (Mixed Elamid or Assyrian Medians) Empire and as Greeks come history takes another shape and then coming of the mixing many Cultures and religions one can saw that Kamboja is now not an easy subject to deal with. Nevertheless We witness their great power and fame in the making of Mahabartha (500 BCE-200 BCE). ".....http://www.pashtunforums.com/showthread.php?t=17883 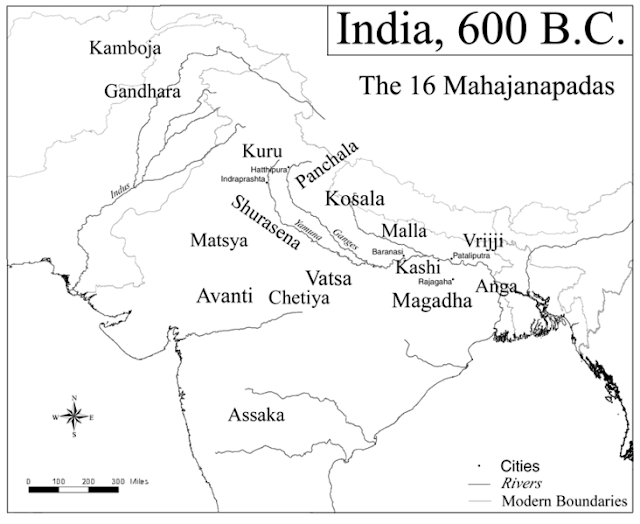