"The ancient Jain texts often explain the concepts of anekāntvāda and syādvāda with the parable of the blind men and an elephant (Andhgajanyāyah), which addresses the manifold nature of truth. This parable resolves the conflict, and is used to illustrate the principle of living in harmony with people who have different belief systems, and that truth can be stated in different ways (in Jain beliefs often said to be seven versions). This is known as the Syadvada, Anekantvada, or the theory of Manifold Predications."..."Elephant and the blind men". Jain Stories. JainWorld.com 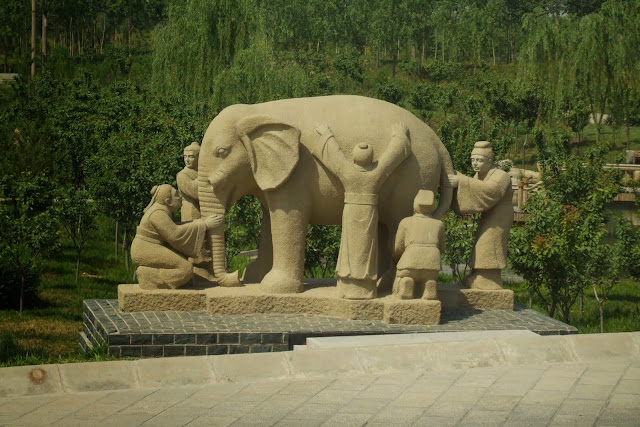 "Syādvāda (Devanagari: स्यादवाद meaning "Could-be-ism") is the Jain doctrine of epistemological relativism underpinning all Jain logic, which is central to their philosophical perspective that all propositions about truth are based on finite, limited, and contextual postulates. In other words, Syādvāda is the theory of conditioned predication which provides an expression to anekānta by recommending that epithet Syād be attached to every expression. Syādvāda is not only an extension of Anekānta ontology, but a separate system of logic capable of standing on its own force. Jainism claims that since reality is complex, no single proposition can express the nature of reality fully. Thus the term "syāt" should be prefixed before each proposition giving it a conditional point of view and thus removing any dogmatism in the statement.".... John M. Koller, Syādvāda as the epistemological key to the Jaina middle way metaphysics of Anekāntavāda, Philosophy East and West 50

"Andhagajanyāyah can be illustrated through the Jain parable of the "blind men and an elephant". In this story, each blind man felt a different part of an elephant (trunk, leg, ear, etc.). All the men claimed to understand and explain the true appearance of the elephant, but could only partly succeed, due to their limited perspectives...."

"Anekāntavāda (Devanagari: अनेकान्तवाद) is one of the most important and fundamental doctrines of Jainism. It refers to the principles of pluralism and multiplicity of viewpoints, the notion that truth and reality are perceived differently from diverse points of view, and that no single point of view is the complete truth... any religion or philosophy—even Jainism—which clings too dogmatically to its own tenets, is committing an error based on its limited point of view.".....Dundas, Paul (2004). "Beyond Anekāntavāda : A Jain approach to religious tolerance". In (ed.) Tara Sethia. Ahimsā, Anekānta, and Jaininsm.

"Andhagajanyāyah, can be illustrated through the parable of the "blind men and an elephant". In this story, each blind man felt a different part of an elephant (trunk, leg, ear, etc.). All the men claimed to understand and explain the true appearance of the elephant, but could only partly succeed, due to their limited perspectives

"The origins of anekāntavāda can be traced back to the teachings of Mahāvīra (599–527 BC), the 24th Jain Tīrthankara. The dialectical concepts of syādvāda "conditioned viewpoints" and nayavāda "partial viewpoints" arose from anekāntavāda, providing it with more detailed logical structure and expression. The Sanskrit compound an-eka-anta-vāda literally means "doctrine of non-exclusivity or multiple viewpoints (an- "not", eka- "one", vada- "viewpoint")"; it is roughly translated into English as "non-absolutism". An-ekānta "uncertainty, non-exclusivity" is the opposite of ekānta (eka+anta) "exclusiveness, absoluteness, necessity" (or also "monotheistic doctrine").".... 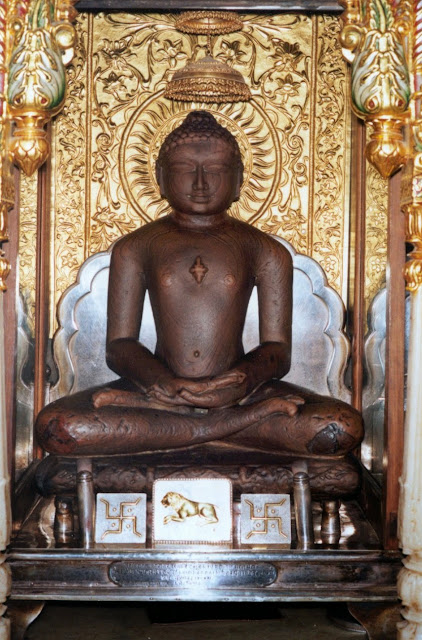 Mahavira (540 BCE–468 BCE), also known as Vardhamana, was the twenty-fourth and last tirthankara of Jainism. He was born into a royal family in what is now Bihar, India...... Mahavira was born into the royal family of King Siddartha of Kundgraam and Queen Trishala....At the time of his birth, the whole town was marked by prosperity in terms of agriculture, health, wealth and wisdom. It is for this reason that he was named as Vardhman (Hindi : Vridhi) by his parents. At the age of 30 he left his home in pursuit of spiritual awakening (Diksha). For the next 12 and a half years he practiced intense meditation and severe penance, after which he achieved Kevala Jnana or enlightenment. He travelled all over India for the next 30 years to teach his philosophy which is based on ahimsa, satya, asteya, brahmacharya and aparigraha.....Mahavira attained nirvana after his physical death at the age of 72.".... 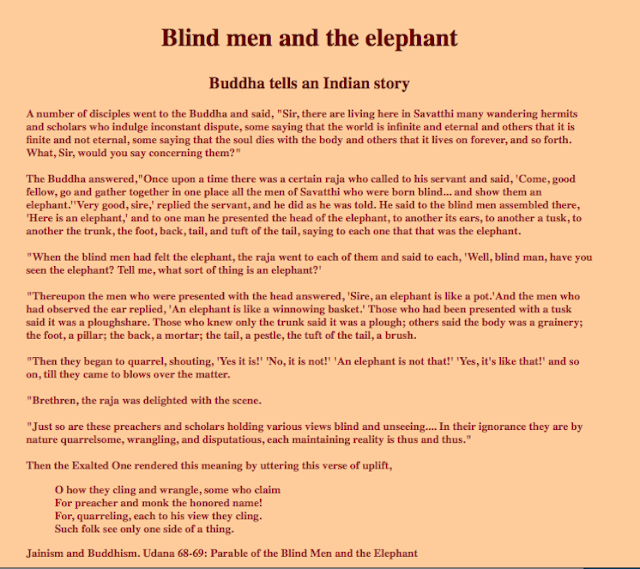 "The story of the blind men (or men in the dark) and an elephant is a parable that has crossed between many religious traditions and is part of Jain, Buddhist, Sufi and Hindu lore. . It has been used to illustrate a range of truths and fallacies; broadly, the parable implies that one's subjective experience can be true, but that such experience is inherently limited by its failure to account for other truths or a totality of truth. At various times the parable has provided insight into the relativism, opaqueness or inexpressible nature of truth, the behavior of experts in fields where there is a deficit or inaccessibility of information, the need for communication, and respect for different perspectives."... 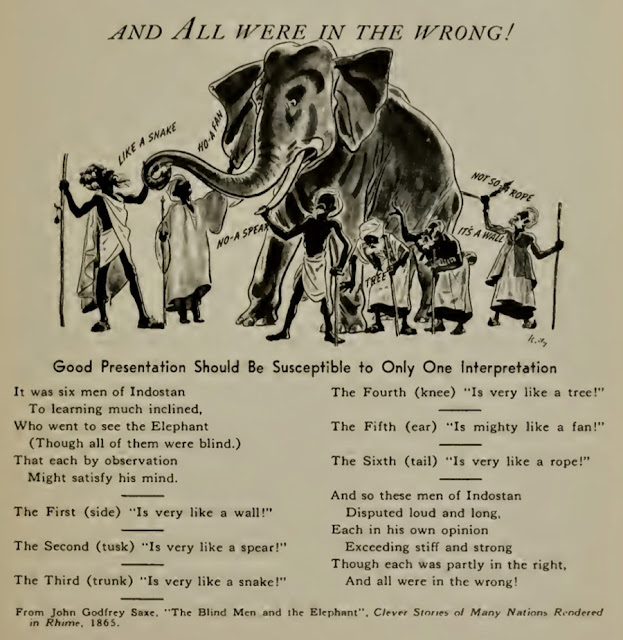 Reality and Truth (Anekāntavāda) by Nagin J. Shah". Bulletin of the School of Oriental and African Studies, University of London