"Kalidasa (Devanāgarī: कालिदास "servant of Kali") was a renowned Classical Sanskrit writer, widely regarded as the greatest poet and dramatist in the Sanskrit language. .....Kālidās, or Kalidasa, was a Sanskrit poet and dramatist and one of the most important later poets in later India. Known to be an ardent worshipper of Shiva......Very little is known about Kalidasa's life and background, although there are many myths surrounding him. Clearly he was a well-educated Brahmin and probably lived in the 4th Century. From his writings it is surmised he was born near the foothills of the Himalayas......From his poems we can also ascertain he traveled throughout India, searching for knowledge. He was also a worshipper of the goddess Kali. His name literally means ‘Kali’s servant.”....Legend has it that he was murdered by a courtesan in Sri Lanka." 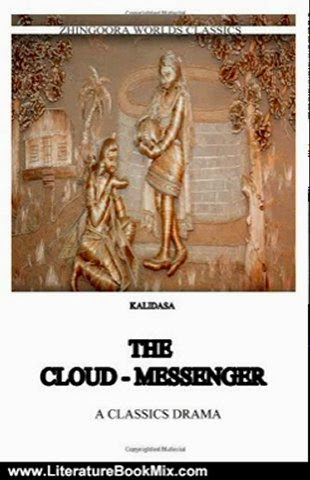 "The Cloud Messenger.....Meghadūta ......is considered to be one of the greatest Sanskrit poems......By Indian standards it is a short poem (only 111 stanzas,). It recounts how a Yaksa, an attendant of Kubera (the God of Wealth) after being exiled for a year to central India for some unknown transgression, convinces a passing cloud to take a message to his wife on Mount Kailasa in the Himalayas. The yaksa accomplishes this by describing the many beautiful sights the cloud will see on its northward course to the city of Alaka, where his wife awaits his return......In 1813, the poem was first translated into English by Horace Hayman Wilson.......An excerpt is quoted in Canadian director Deepa Mehta's film, Water."....http://www.thegreatbookslist.com

"Kālidāsa ("servant of Kali" Sanskrit: कालिदास) was a Classical Sanskrit writer, widely regarded as the greatest poet and dramatist in the Sanskrit language. His floruit cannot be dated with precision, but most likely falls within the 5th century AD......His plays and poetry are primarily based on the Puranas .... Encyclopædia Britannica: Kalidasa

"Scholars have speculated that Kālidāsa may have lived either near the Himalayas, or in the vicinity of Ujjain, or in Kalinga. The three speculations are based respectively on Kālidāsa's detailed description of the Himalayas in his Kumārasambhava, the display of his love for Ujjain in Meghadūta, and his highly eulogistic descriptions of Kalingan emperor Hemāngada in Raghuvaṃśa (sixth sarga).....But some scholars tend to describe him as a Kashmiri saying that, far from being contradictory, these facts just show that he was born in Kashmir (based on topographic descriptions, rural folklore, the region's fauna and flora, ... only local populations could know) but moved for diverse reasons and sought the patronage of local rulers to prosper......It is believed that he was from humble origin, married to princess and challenged by his wife, studied poetry to become great poet. Some believe that he visited Kumaradasa, the king of Ceylon and, because of some treachery, Kalidasa was murdered there. His wife's name was Vidyotama."......Lakshmi Dhar Kalla:...'The Birthplace of Kalidasa' (1926).

"...now it is generally accepted that Kalidasa's period falls between 5th and 6th Century C.E.His name, along with poet Bharavi's name, is mentioned in a stone inscription dated 634 C.E. found at Aihole, located in present day Karnataka.

"Meghadūta (Sanskrit: मेघदूत literally "cloud messenger") is a lyric poem written by Kālidāsa, considered to be one of the greatest Sanskrit poets.....A short poem of 111 stanzas, it is one of Kālidāsa's most famous works ever. The work is divided into two parts, Purvamegh and Uttaramegh. It recounts how a yakṣa, a subject of King Kubera (the god of wealth), after being exiled for a year to Central India for neglecting his duties, convinces a passing cloud to take a message to his wife at Alaka on Mount Kailāsa in the Himālaya mountains.The yakṣa accomplishes this by describing the many beautiful sights the cloud will see on its northward course to the city of Alakā, where his wife awaits his return. 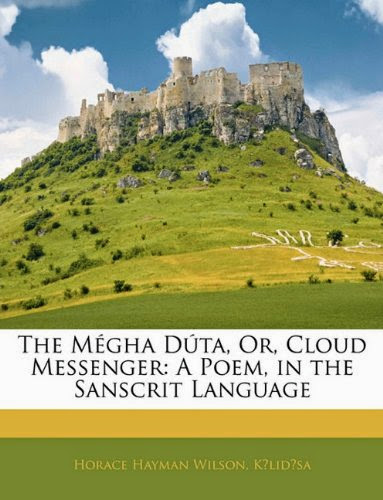 "Alaka (Sanskrit: अलक), which is also sometimes called Alakapuri, is a mythical city. It is the home of Kubera, the king of Yakshas and the lord of wealth, and his attendants called yakshas. The Mahabharata mentions this city as the capital of the Yaksha Kingdom. This city rivals the capital of Indra the king of the Devas in its architecture, opulence, and overall splendor. It is quoted in the famous lyrical poem Meghadūta by Kalidasa."... Kramrisch, Stella. 1994. The Presence of Siva.

"Yaksha (Sanskrit: यक्ष yakṣa...Tibetan: གནོད་སྦྱིན་ gnod sbyin) is the name of a broad class of nature-spirits, usually benevolent, who are caretakers of the natural treasures hidden in the earth and tree roots. They appear in Hindu, Jain and Buddhist literature. The feminine form of the word is yakṣī (यक्षी) or Yakshini (yakṣiṇī, यक्षिणी)..... the yakṣa has a dual personality. On the one hand, a yakṣa may be an inoffensive nature-fairy, associated with woods and mountains; but there is also a darker version of the yakṣa, which is a kind of ghost (bhuta) that haunts the wilderness and waylays and devours travelers, similar to the rakṣasas......In Kālidāsa's poem Meghadūta, for instance, the yakṣa narrator is a romantic figure, pining with love for his missing beloved. By contrast, in the didactic Hindu dialogue of the Yakṣapraśnāḥ "Questions of the Yakṣa", it is a tutelary spirit of a lake that challenges Yudhiṣṭhira. The yakṣas may have originally been the tutelary gods of forests and villages, and were later viewed as the steward deities of the earth and the wealth buried beneath.....In Indian art, male yakṣas are portrayed either as fearsome warriors or as portly, stout and dwarf-like. Female yakṣas, known as yakṣiṇīs, are portrayed as beautiful young women with happy round faces and full breasts and hips."..... 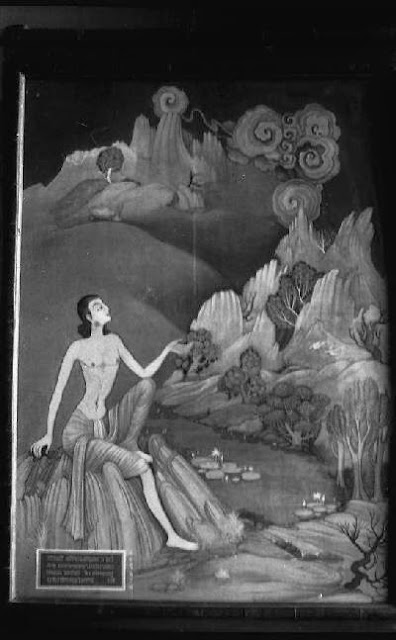 " In the Hindu religion, Mt. Kailash is seen as the throne of Mahadeva, the great god Shiva. On Kailash, Shiva sits in perpetual meditation with his consort Parvati. Due to the apparent phallic appearance of the incredibly symmeric mountain, the Hindus identify the mountain with the lingam, which is a phallic symbol of Shaivism. Another Hindu belief maintains that Kuvera, the god of wealth, ruled from a remarkably rich and exotic city of pleasure called Alaka, which was situated on or near Kailash, along with eight neighboring lesser peaks used as treasure houses for the god. In another Hindu myth, Mt. Kailash was overturned and used as a churning stick by the deva gods and asura demons to churn the cosmic oceans in order to make Amrita, the Elixer of Immortality.
The Jain religion, which arose in India around the sixth century b.c., also sees Kailash as a spiritually significant peak. It has many goals, but one of the major ones is the attainment of liberation from the pains of burdens of a worldy existence. In the Jain religion, Kailash is called Astapada, and is known as the place where a man named Rishabha, the first Tirthankara, attained Liberation, called Moksha.
The Bön religion originated possibly somewhere near modern Soviet Central Asia before the arrival of Buddhism in the 7th century. Its main religions functions were concerned with control of powerful spirits, exorcism, divination, death and burial, and a few other related matters. It wasn't a very formalized religion for a long time, but it did have an important cult center called Zhang Zhung. Zhang Zhung was an ancient kingdom that covered a lot of western Tibet, but also some of the north and northeastern parts of the Tibetan plateau as well. The capitol was located just west of Kailash at the "Silver Castle" of Khunglung. Eventually, with the introduction of Buddhism into the area, there was more of a push to develop and organize the Bön religion onto a firmer doctrinal basis. While doing so, Bön adapted some principles of Buddhism and vice versa. In the ancient Bön cults, mountains were seen as important power points that linked heaven and earth, and in so doing were endowed with powerful cosmogonic and geneological associations. This made them considered to be the "souls" of certain areas. In Mt. Kailash's case, it was seen as the Soul Mountain of Zhang Zhung.
To Hindus, Buddhists, and Jains, Mt. Kailash is seen as a cosmic axis, about which the entire universe revolves. "....http://www.colorado.edu/APS/landscapes/tibet/kailash.htm

"Kubera (Sanskrit: कुबेर, Pali/later Sanskrit: Kuvera) also spelt Kuber, is the Lord of Wealth and the god-king of the semi-divine Yakshas in Hindu mythology. He is regarded as the regent of the North (Dik-pala), and a protector of the world (Lokapala). His many epithets extol him as the overlord of numerous semi-divine species and the owner of the treasures of the world. Kubera is often depicted as a fat man, adorned with jewels and carrying a money-pot or money-bag, and a club....Originally described as the chief of evil spirits in Vedic-era texts, Kubera acquired the status of a Deva (god) only in the Puranas and the Hindu epics. The scriptures describe that Kubera once ruled Lanka, but was overthrown by his demon stepbrother Ravana, later settling in the city of Alaka in the Himalayas. Descriptions of the "glory" and "splendours" of Kubera's city are found in many scriptures......Kubera has also been assimilated into the Buddhist and Jain pantheons. In Buddhism, he is known as Vaisravana, the patronymic used of the Hindu Kubera and is also equated with Pañcika, while in Jainism, he is known as Sarvanubhuti....Vaiśravaṇa is also known as Kubera (Sanskrit) or Kuvera (Pāli), and as Jambhala (Sanskrit)." 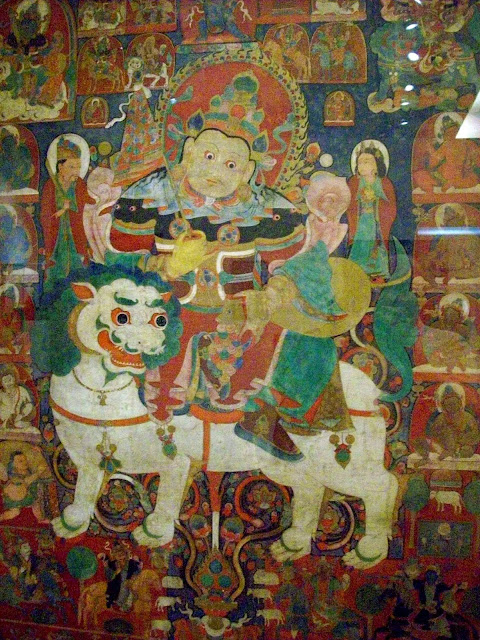