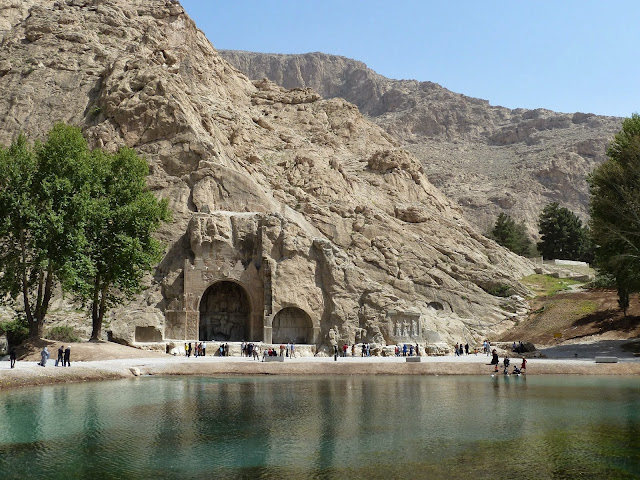 “Some of the finest surviving rock carvings of the Sassanid period set in the rock face of the Zagros mountains that were on the Silk route & are next to a sacred spring filling a lake near the mountain base…..near Kermanshah is Taq-e Bostan, the UNESCO declared Heritage site of the Sassanid era in the Zagros mountains. It contains a beautiful bas-relief of the crowning of the Sassanid King Khosrow Parvez who is in the center with Ahura Mazda on the right & Goddess Anahita on the left. The mounted warrior on the bottom is the king himself in armor on his favorite horse Shabdiz.…. 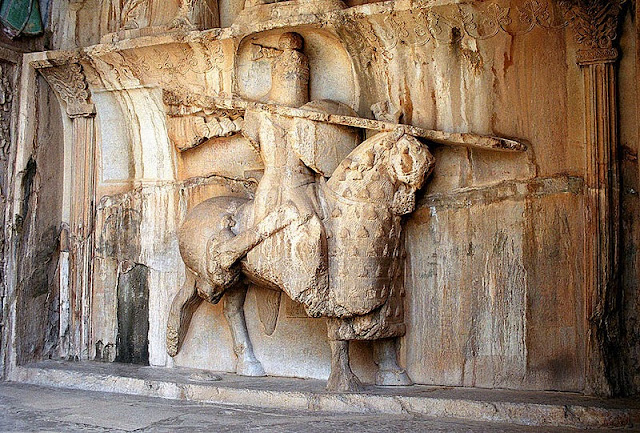 “The Large Iwan of Khusrow II…..The three figures on the back wall of the large iwan are usually considered to represent Khosrow Parviz flanked by Ahura Mazda and Anahita. They are placed above a mounted Persian knight, thought to be the Sassanid king Khosrau II (591-628 CE) mounted on his favorite charger, Shabdiz. There is, however, no unanimity about the exact identification of this late Sasanian king. The two attending figures are sometimes considered to be a priest and a priestess, rather than the gods Ahura Mazda and Anahita themselves….One of the most impressive reliefs inside the largest grotto or ivan is the gigantic equestrian figure of Both horse and rider are arrayed in full battle armor. 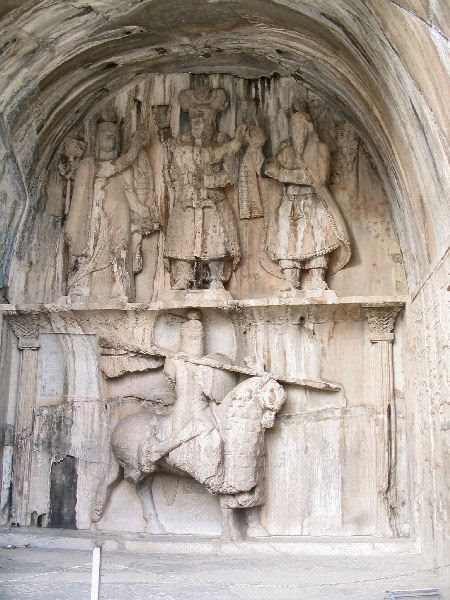 “The front of the rock-cut arch bears delicately carved patterns showing the tree of life or the sacred tree. Above the arch and located on two opposite sides are figures of two winged women with diadems.

“Anahita is the Old Persian form of the name of an Iranian goddess and appears in complete and earlier form as Aredvi Sura Anahita (Arədvī Sūrā Anāhitā); the Avestan language name of an Indo-Iranian cosmological figure venerated as the divinity of 'the Waters' (Aban) and hence associated with fertility, healing and wisdom. Aredvi Sura Anahita is Ardwisur Anahid or Nahid in Middle- and Modern Persian, Anahit or Anaheed in Armenian. An iconic shrine cult of Aredvi Sura Anahita, was – together with other shrine cults – "introduced apparently in the 4th century BCE and lasted until it was suppressed in the wake of an iconoclastic movement under the Sassanids……Boyce, Mary (1983), "Anāhīd", Encyclopædia Iranica 1, New York: Routledge & Kegan Paul,.”….The Greek and Roman historians of classical antiquity refer to her either as Anaïtis or identified her with one of the divinities from their own pantheons.

“Taq va San or Taq-e Bostan….(Kurdish: تاق وه سان, "arch of Stone"),(Persian: طاق بستان‎, "arch of Bostan") is a site with a series of large rock relief from the era of Sassanid Empire of Persia, which ruled western Asia from 226 to 650 AD. This example of Sassanid art is located 5 km from the city center of Kermanshah in the heart of the Zagros mountains, where it has endured almost 1,700 years…..The carvings, some of the finest and best-preserved examples of Persian sculpture under the Sassanids, include representations of the investitures of Ardashir II (379–383) and Shapur III (383–388). Like other Sassanid symbols, Taq-e Bostan and its relief patterns accentuate power, religious tendencies, glory, honor, the vastness of the court, game and fighting spirit, festivity, joy, and rejoicing…..Sassanid kings chose a beautiful setting for their rock reliefs along an historic Silk Road caravan route waypoint and campground. The reliefs are adjacent a sacred springs that empty into a large reflecting pool at the base of a mountain cliff….Taq-e Bostan and its rock relief are one of the 30 surviving Sassanid relics of the Zagros mountains. According to Arthur Pope, the founder of Iranian art and archeology Institute in the USA, "art was characteristic of the Iranian people and the gift which they endowed the world with."

“Khosrau II….. (Chosroes II in classical sources, entitled "Aparvez"; later garbled into Parviz), "The Victorious" – (Middle Persian: Husrō(y); also Khusraw Parvēz, New Persian: خسرو پرویز Khosrow Parviz), was the last great king of the Sasanian Empire, reigning from 590 to 628….. He was the son of Hormizd IV (reigned 579–590) and the grandson of Khosrau I (reigned 531–579). He was the last king of Persia to have a lengthy reign before the Muslim conquest of Iran, which began five years after his death by assassination. He lost his throne, then recovered it with Roman help, and, a decade later, went on to emulate the feats of the Achaemenids, conquering the rich Roman provinces of the Middle East; much of his reign was spent in wars with the Byzantine Empire and struggling against usurpers such as Bahram Chobin and Vistahm.

“In works of Persian literature such as the Shahnameh and Khosrow and Shirin (Persian: خسرو و شیرین‎), a famous tragic romance by Nizami Ganjavi (1141−1209), a highly elaborated fictional version of Khosrau's life made him one of the greatest heroes of the culture, as much as a lover as a king. Khosrow and Shirin tells the story of his love for the Aramean princess Shirin, who becomes his queen after a lengthy courtship strewn with mishaps and difficulties.”

“In Kermanshah, near the border with Iraq, Maziar meditated for some time by the spring of Taq-e Bostan. Facing the spring were several reliefs carved into the rock, dating from the time of the Sassanid dynasty. The largest one depicted the last great king of that dynasty, Khosrow II Parviz, surrounded by Ahura Mazda and Anahita, and below him was a figure of a charging knight…..http://forum.paradoxplaza.com/forum/showthread.php?532609-The-Land-of-the-AARyans-A-Zoroastrian-Persia-AAR-(MMU)/page3

“Bas-relief is a type of sculpture that has less depth to the faces and figures than they actually have, when measured proportionately (to scale). This technique retains the natural contours of the figures, and allows the work to be viewed from many angles without distortion of the figures themselves….Bas relief is created either by carving away material (wood, stone, ivory, jade, etc.) or adding material to the top of an otherwise smooth surface (say, strips of clay to stone). This is a technique as old as humankind's artistic explorations,…. 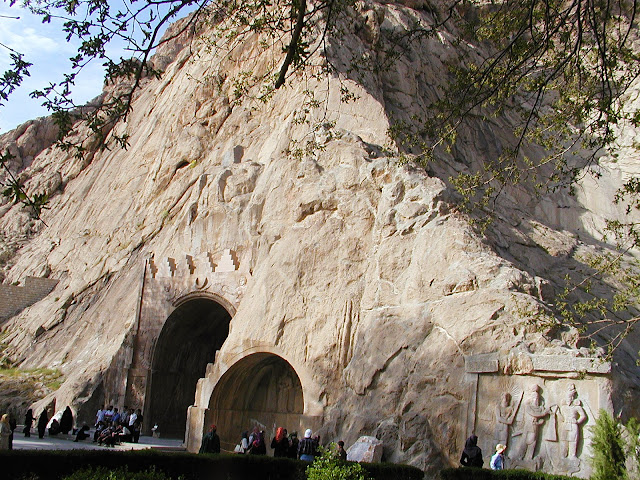 “UNESCO World Heritage Site…Taq-e Bostan…This complex consists of a series of properties from prehistoric to historical periods such as Morad-Hassel Tepe, an ancient village, a Parthian graveyard and a Sassanid hunting ground. The most significant property of the complex belongs to the Sassanid one which comprises of two porticos (large and small Ivans) as well as outstanding bas-reliefs from the same period…….It is an incomparable site in terms of the number of bas-reliefs and the historical, political, religious, social, artistic values involved, but comparable with some works in Naqsh-e Rostam, Naqsh-e Rajab, Chogan Tepe and Firouzabad.”….. http://whc.unesco.org/en/tentativelists/5182/

“Ṭāq-e Bostān, or Tāq-i-Bustān, village in western Iran, just northeast of Kermānshāh city. It is known for its rock carvings (bas-reliefs) of Sāsānid origin (3rd to 7th century ad). The carvings, some of the finest and best-preserved examples of Persian sculpture under the Sāsānians, include representations of the investitures of Ardashīr II (reigned ad 379–383) and of Shāpūr III (383–388), the latter in a man-made cave carved in the form of an iwan (three-sided, barrel-vaulted hall, open at one end).” 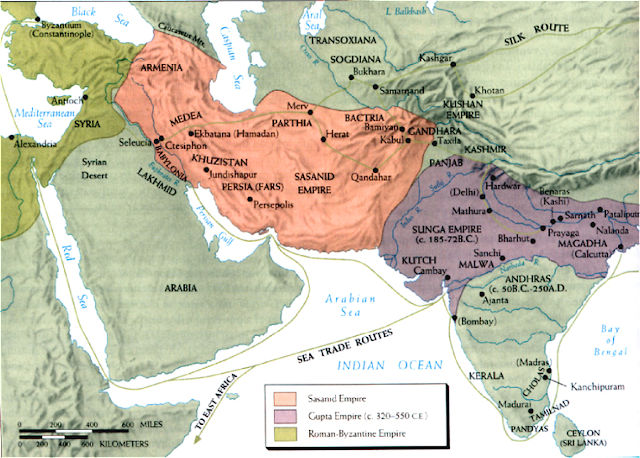