Alexander The Great in Bactria ( 334 BC)

Alexander III of Macedon (20/21 July 356 – 10/11 June 323 BC), commonly known as Alexander the Great (Greek: Ἀλέξανδρος ὁ Μέγας, Aléxandros ho Mégasiii[›] from the Greek ἀλέξω alexo "to defend, help" + ἀνήρ aner "man"), was a king of Macedon, a state in northern ancient Greece. Born in Pella in 356 BC, Alexander was tutored by Aristotle until the age of 16. By the age of thirty, he had created one of the largest empires of the ancient world, stretching from the Ionian Sea to the Himalayas. 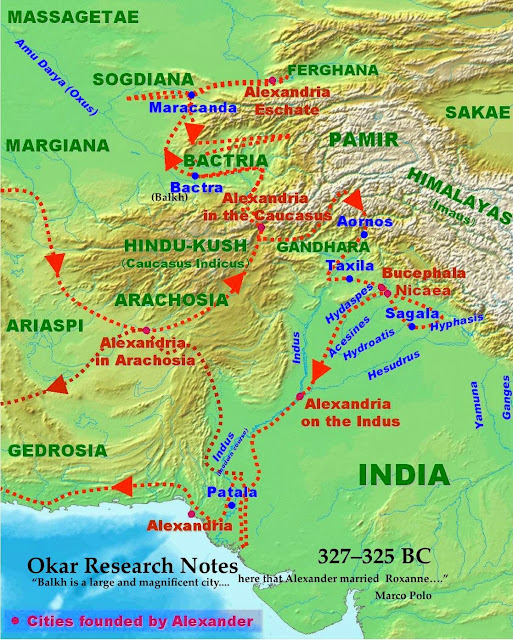 
Alexander was more concerned with conquering the Earth than touching the earth...

Alexander adopted Persian royal dress and attempted to impose the Persian court ceremonial of prostration (proskynesis) on the Greeks (to no avail). His attempts at a racial fusion between the Greeks and the Orientals was also futile. He was buried in a crystal coffin in Egypt, location still unknown. His armies mutinied in India, desiring to return to Persia. (Encyclopedia Britannica)...Alexander spent a year in Samarkind (then Marakanda) because 'it was so beautiful'..

Alexander conquered Sogdiana and Iran. However, in the south, beyond the Oxus, he met strong resistance. After two years of war Bactria was occupied by the Macedonian empire, but Alexander never successfully subdued the people. After Alexander's death, the Macedonian empire was eventually divided up between generals in Alexander's army. Bactria became a part of the Seleucid Empire, named after its founder, Seleucus I

A trip around the northern province of Balkh is like an odyssey through the centuries, spanning the ancient Persian empire, the conquests of Alexander the Great and the arrival of Islam.The French mission has mapped 135 sites of archaeological interest in the region, best known for the ancient trove found by a Soviet archaeologist in the 1970s.The Bactrian Hoard consisted of exquisite gold jewelry and ornaments from graves of wealthy nomads, dated to the 1st century. It was hidden from the Taliban regime, concealed by its keepers in the vaults of the presidential palace in Kabul, and finally unlocked after the militia's ouster.

Balkh is a large and magnificent city. It was here that Alexander married the daughter of Darius." (Marco Polo in Waugh: 1984..pg 42)

The Acesines in the journey of Alexander into India is the Chenab, a name derived from the more ancient Chandrabhaga which is traceable in the name Sandabala, by which the river is designated by Ptolemy."..(Bunbury: 1959..pg 502)...

He also tells a most interesting tale of giant gold digging ants of Which Alexander was well aware and had hoped to locate in his eastward drive. The tale had been a source of much fascination over the histories as the author of the following report alludes.......‘This account of animals bringing gold to humans had a compelling, dreamlike quality in the ancient world. It inspired an enduring quest among adventures—from Alexander the Great in the fourth century BC to Alexander von Humboldt in the 19th century, nearly 2500 years later. Pliny the Elder claimed that ant’s horns rested in the Temple of Hercules; Suleyman the Magnificent is said to have been given ants "pelts" by the emperor of Persia. Scholars agree that Herodotus placed the home of the ants north of Kasapatyros, the ancient capital of Kashmir—near the Karakorum Mountains where present-day Pakistan, India and China intersect. Herodotus is "the father of history"....

CYRUS....Greek accounts describe the tomb as having been placed in the fertile Pasargadae gardens, surrounded by trees and ornamental shrubs, with a group of Achaemenian protectors (the "Magi"), stationed nearby to protect the edifice from theft or damage....The magi were a group of on-site Zoroastrian observers, located in their separate but attached structure possibly a caravanserai, paid and cared for by the Achaemenid state (by some accounts they received a salary of daily bread and flour, and one sheep payment a day). The magi were placed in charge of maintenance and also prevention of theft. Years later, in the ensuing chaos created by Alexander the Great's invasion of Persia and loss of a centralized authority directing and caring for the Magi, Cyrus the Great's tomb was broken into and most of its luxuries were looted. When Alexander reached the tomb, he was horrified by the manner in which the tomb was treated, and questioned the Magi and put them to court. On some accounts, Alexander's decision to put the Magi on trial was more about his attempt to undermine their influence and his show of power in his newly conquered empire, than a concern for Cyrus's tomb.Regardless, Alexander the Great ordered Aristobulus of Cassandreia to improve the tomb's condition and restore its interior.

Destruction of the Achaemenian Avesta by Alexander (330 BCE).... Arda Viraf (see above), goes on to state in the Arda Wiraz Namag (Arda Viraf Namah) that Alexander of Macedonia, in 330 BCE, burned the Avestan manuscripts deposited at the royal library at Ishtakhr. Alexander also ordered killed several judges, dasturs, mobeds, herbads (priests) and other upholders of the religion, as well as the competent and wise of the country of Iran (in an attempt to destroy the oral tradition as well).

Bundahishn 33.14: "Then, during the reign of Darius son of Darius, the emperor Alexander came to Iranshahr, scurrying from Arum (Europe), killed king Darius, destroyed all the families of rulers, magi, and public men of Iranshahr, extinguished an immense number of sacred fires, seized the commentary (zand) of the Revelation of Mazda-worship, and sent it to Arum, burned the Avesta, and divided Iranshahr among ninety petty rulers."

Mahankard (c. 750 CE. Translated from Middle Persian to Arabic): Alexander destroyed the original ancient Persian books after having them translated into Greek. (Other accounts below state that only certain topics/books were translated and the others, e.g. religious, were destroyed without translation.)

Ibn Qutayba (d. 889 Arabic): Alexander conquered the kingdom of Iran and burned the books of their religion.

Sahristaniha-e Iran (Middle Persian): Alexander destroyed the Avesta which was stored in writing in Samarqand. (We note here that the written Avesta was stored in what may be considered the regional capital of the Eastern Iranian (Persian) Empire.

Hamza al-Isfahani, wr. 961 [Eight collated translations of the Middle Persian Khwaday Namag (Khoda Namah also used by Ferdowsi) to Arabic] & supported by the account of Musa ibn Isa al-Kisrawi: Alexander, jealous of the unparalled knowledge of the Persian nation, first translated what he needed from the Persian, then destroyed the rest, killing the Magi too. Although he destroyed their books on religion, he translated their books dealing with philosophy, astrology, medicine, and agriculture from Persian into Greek and Egyptian, which he sent to Alexandria (cf. our page on Ostanes - Persian Sage in Egypt). This account confirms that the Avesta and supporting texts were encyclopaedic in knowledge as further confirmed by the Dinkard's summary of the 21 books of the Avesta.

The Avesta is all that remains of the 21 Nards, and these were only part of an even larger collection of works that existed before Alexander destroyed the sacred texts of the Persians, as Diodorus, the historian, relates. The Zoroastrian bible was probably complete by about 400 BC. The Persian archives were held at Persepolis yet Alexander uncharacteristically burnt the city and murdered many of Persia’s leading scholars, though they had willingly surrendered exoecting mercy. The Dinkard, a ninth century Persian work says there were only ever two copies of Zoroaster’s monumental work, one of which was burned and the other was confiscated by the Greeks.

Alexander was not normally disposed to offending the people he conquered. He had just captured Babylon where the priests of Marduk welcomed him, and he had showed respect to them, consulting them on the proper way to worship the Babylonian god, Marduk, taking him by the hand, and offering animal sacrifices to him. He ordered Marduk’s statues and temples to be restored. Earlier he had honoured the Jewish god, and the God, Amun, in Egypt. Perhaps Alexander was merciful to those who surrendered without trouble but, after the battle of Issus, Darius was practically offering surrender to Alexander, so the brutality must have been in revenge for the Greek war with Xerxes.

"Olympias, the mother of Alexander was involved in the enthusiastic Orphic rites, and the wild worship of Bacchus, (upon which account they were called Clodones, and Mimallones,) imitated in many things the practices of the Edonian and Thracian women about Mount Haemus......The Dionysian Mysteries were a ritual of ancient Greece and Rome which used intoxicants and other trance-inducing techniques (like dance and music) to remove inhibitions and social constraints, liberating the individual to return to a natural state. It also provided some liberation for those marginalized by Greek society: women, slaves and foreigners. In their final phase the Mysteries shifted their emphasis from a chthonic, underworld orientation to a transcendental, mystical one, with Dionysus changing his nature accordingly (similar to the change in the cult of Shiva). By its nature as a mystery religion reserved for the initiated, many aspects of the Dionysian cult remain unknown and were lost with the decline of Greco-Roman polytheism; our knowledge is derived from descriptions, imagery and cross-cultural studies......Olympias: Mother of Alexander the Great....By Elizabeth Carney