"Mount Khwaja or Mount Khwajeh (locally: Kuh-e Khvājeh) is a flat-topped black basalt hill rising up as an island in the middle of Lake Hamun, in the Iranian province of Sistan and Baluchestan......The trapezoid-shaped basalt lava outcropping, located 30 km southwest of the town of Zabol, rises to 609 meters above sea level and has a diameter ranging from 2.0 to 2.5 kilometres. It is the only natural height in the Sistan area, and is named after an Islamic pilgrimage site on the hill: the tomb and shrine of Khwaja Ali Mahdi, a descendent of Ali ibn Abi Talib......Mount Khwaja is also an important archaeological site: On the southern promontory of the eastern slope, the ruins of a citadel complex - known as the Ghagha-Shahr - with its remains of a fire temple attest to the importance of the island in pre-Islamic Iran. According to Zoroastrian legend, Lake Hamun is the keeper of Zoroaster's seed. In Zoroastrian eschatology, when the final renovation of the world is near, maidens will enter the lake and then give birth to the saoshyans, the saviours of humankind.......The fire temple is on a terrace behind high walls and is protected by two forts, whose remains are respectively known as Kok-e Zal and Chehel Dokhtaran. Collectively, the ruins are called Qal'a-e Kafaran "Fort of Infidels" or Qal'a-e Sam "Fort of Sam," the grandfather of the mythical Rostam. Both names reflect pre-Islamic heritage. The walls of the temple were once extravagantly decorated with murals, some of which are now on display in museums in Tehran, Berlin, New Delhi and New York.......The citadel complex was first investigated by Marc Aurel Stein in 1915-1916. The site was later excavated by Ernst Herzfeld, and was again investigated in part by Giorgio Gullini in a short expedition of 1960. Initially, Herzfeld tentatively dated the palace complex to the 1st century CE, that is, to the Arsacid period (248 BCE-224 CE). Herzfeld later revised his estimate to a later date and today the Sassanid period (224-651 CE) is usually considered to be more likely. Three bas-reliefs on the outer walls that depict riders and horses are attributed to this later period. Beyond the citadel at the top of the plateau are several other unrelated buildings, of uncertain function and probably dating to the Islamic period.".....Ernst Herzfeld Papers, Series 5: Drawings and Maps, Records of Kuh-e Khwaja 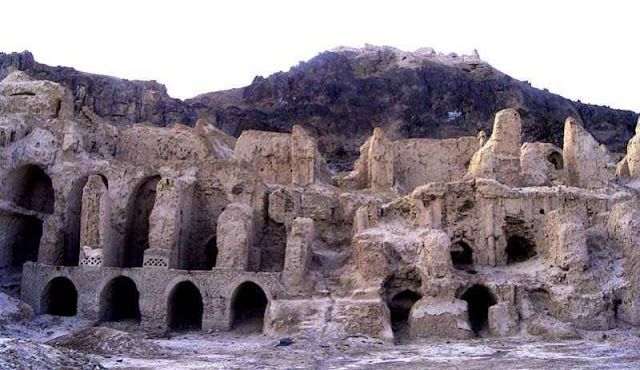 "Nimrouz: meaning mid-day, or noon?........Now the Date Line is arbitrarily set in Greenwich; but ancient Iranian wisdom set the centre of the world in Sistan, at 33.5N. The chosen location might have been based on the idea that beyond 67 degrees North there was no civilization – which sets the halfway point at 33.5N......There is specific reference to Nim Rouz in the eleventh century Tarikh-e Sistan (The History of Sistan), describing how the world’s scholars have divided the world. Its limits are the sunrise to the east on the shortest day, to sunset in the west on longest day; and “this science is proved by arithmetic”. Even earlier, the Avesta describes how: “He, whose very long arms catches the unfaithful, overthrows him, even if he is in the East of India, in the West, or in the middle of this earth, on the outfall of Arang River”. The Arang River is now called Syrdarya or Sayhoun River, the outfall of which in Aral (Kharazm)........Another account describes how, when it was noon (Nim Rouz) in Sistan, then all the countries of the Ancient Civilization had sunshine: in the Easternmost corner it would be sunset while in the Westernmost corner it would be dawn.......It’s difficult to know how it could have been calculated in ancient times, but Nimrouz is apparently exactly in the middle of the eastern part of the earth. Its distance to the Kuril trench Islands in the Pacific Ocean (in the far east) is 90 degrees – while its distance to the Azores Islands in the Atlantic Ocean (in the far west) is 90 degrees.......Now, there are no known remnants of Zarathusthra’s observatory, although the land of Nimrouz does still include Hamun lake and Khajeh mountain. This lake and little mountain in the middle of it is like a sample of the world – with land of Khajeh surrounded by water of Hamun lake...." 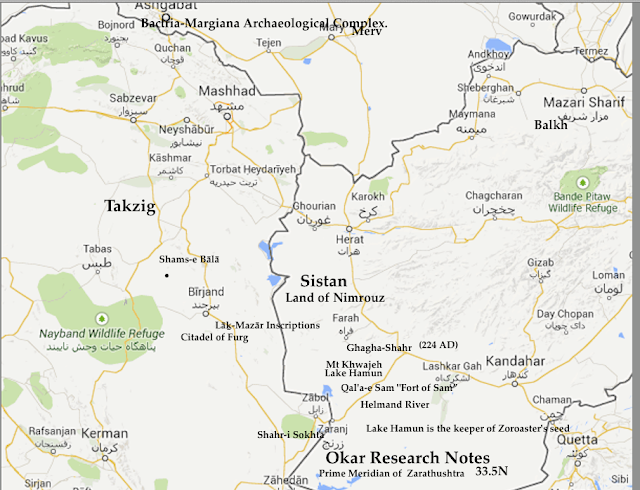 "Rostam or Rustam (Persian: رُستَم‎, ) is the epic hero of the story, Rostam and Sohrab, part of the Persian epic of Shahnameh
in Persian mythology, and son of Zal and Rudaba. In the story, he and his predecessors were natives of Zabul (southeast
Afghanistan)......He was immortalized by the 10th-century poet Ferdowsi of Tus in the Shahnameh or Epic of Kings, which
contain pre-Islamic folklore and history......In Ferdowsi's Shahnameh, Rostam is a native of the Zabol part of the
Zabulistan region which is in modern Southeast Afghanistan. Rostam is the champion of champions and is involved in numerous stories, constituting some of the most popular (and arguably some of most masterfully created) parts of the
Shahnameh. In Shahnameh, Rostam - like his grandfather Sam - works as both a faithful military general as well as king-maker for the Kayanian dynasty of Persia.....Sām (سام), also transliterated Saam is a mythical hero of ancient Persia, and
an important character in the Shahnameh epic. He was the son of Nariman, grandson of Garshasp and father to Zāl. He
was Iran's champion during the rule of Fereydun, Manuchehr and Nowzar. He was appointed by Manuchehr to rule Zabulistan (Sistan), and then Mazandaran. After Manuchehr, because of Nowzar's corrupted and failed rulership, Iranian
champions asked Sām to rule Iran. Sām didn't accept, he supported Nowzar and advised him to follow Fereydun and
Manuchehr. Sām returned to Mazandaran, and died soon after that. Afrasiab then attacked Zabulistan....
The name Sām is equivalent to the Avestan name 'Saama', which means dark and Sanskrit 'Shyaama'
which means the same."....

"The Shahnameh tells us that Sam and his family were kings of Sistan (Sagistan) and Zabulistan. At present in Iran, Sistan (also Seistan) is a province that shares its name with Baluchistan, with Zabol as a principal city in its north and Zaboli in the centre-east. Zabol is also a south-central Afghan province. Iranian Sistan is ethnically Iranian and Baluchi while Aghani Zabol is ethnically Pashtu. Zabol appears to be an older name while Sistan has been connected (tenuously) to a Saka invasion and migration into the region's western part in 128 BC. If correct, then Sistan could have become the eastern part of the original region while Zabulistan remained the western part. .....Sistan has other names as well, one being the Achaemenian name Zraka, then Zari, and the other Nimruz, meaning mid-day. Today, Nimruz is the Afghani province that borders Iranian Sistan-Baluchistan. The name Nimruz is thought to reflect a belief that the prime meridian of the known world stretching from Europe and Africa on the west to Japan in the east ran through Sistan. One tradition has Zarathushtra first locating the meridian and then building on observatory close to the present city of Zabol. A principal Sistan town in antiquity was At Shahr-i Sokhta and amongst its ruins an elaborate c 2500 BCE Bronze Age palace has been excavated.".....http://www.heritageinstitute.com

"Shahr-e Sūkhté (Persian: شهر سوخته‎, meaning "[The] Burnt City"), also spelled as Shahr-e Sukhteh and Shahr-i Shōkhta,
is an archaeological site of a sizable Bronze Age urban settlement, associated with the Jiroft culture. It is located in Sistan and Baluchistan Province, the southeastern part of Iran, on the bank of the Helmand River, near the Zahedan-Zabol road. A proposal is submitted to include it in the World Heritage List of UNESCO......The reasons for the unexpected rise and fall of the Burnt City are still wrapped in mystery. Artifacts recovered from the city demonstrate a peculiar incongruity with nearby civilizations of the time and it has been speculated that Shahr-e-Sookhteh might ultimately provide concrete evidence of a civilization east of prehistoric Persia that was independent of ancient Mesopotamia.".....http://www.anobanini.com

"Greater Khorasan has witnessed the rise and fall of many dynasties and governments in its territory throughout history. Various tribes of the Arabs, Turks, Kurds Mongols, Turkemen and Afghans brought changes to the region time and time again.....Ancient geographers of Iran divided Iran ("Iran-Shahr") into eight segments of which the most flourishing and largest was the territory of Greater Khorasan. Esfarayen, among other cities of the province, was one of the focal points for residence of the Aryan tribes after entering Iran.....The Parthian empire was based near Merv in Khorasan for many years. In Parthians times, Esfarayen was one of the important villages of Nishapur......During the Sassanid dynasty the province was governed by a Spahbod (Lieutenant General) called "Padgoosban" and four margraves, each commander of one of the four parts of the province......Khorasan was divided into four parts during the Muslim conquest of Persia, each section being named after the four largest cities, Nishapur, Merv, Herat, and Balkh.....In the year 651, the army of Islamic Arabs invaded Khorasan. The territory remained in the hands of the Abbasid clan until 820, followed by the rule of the Iranian Taherid clan in the year 896 and the Samanid dynasty in 900.".....

"LĀḴ-MAZĀR “Rocky sacred place (?),” name applied to gorges not far from the settlement of Kuč, 29 km southeast of Birjand in Khorasan Province (ostān). For the name, compare Pers. sanglāḵ “stony place, gorge of stones,” dīwlāḵ “dwelling of div” (q.v.), rūd lāḵ “river bed.” In April 1992 Iranian scholar-archeologists, students of local lore, and linguists working in the Department of Cultural Heritage of Khorasan Province in­vestigated rock inscriptions and petroglyphs there (the results were published in 1994; see Ḵāniki and Baššāš)...... the gorges of Lāḵ-Mazār runs the road from Khorasan to Kerman. ".......http://www.iranicaonline.org 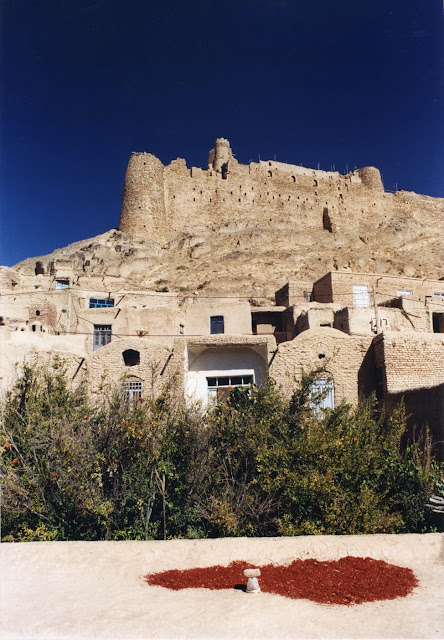 The Citadel of Furg, or Arg e Furg, is a citadel from the 12th century, located in South Khorasan, in Iran, near Birjand.