"Zhang Qian spent a year in Yuezhi and the adjacent Bactrian territory with its remnants of Greco-Bactrian rule, documenting their cultures, lifestyles and economy, before beginning his return trip to China in 125 BC." 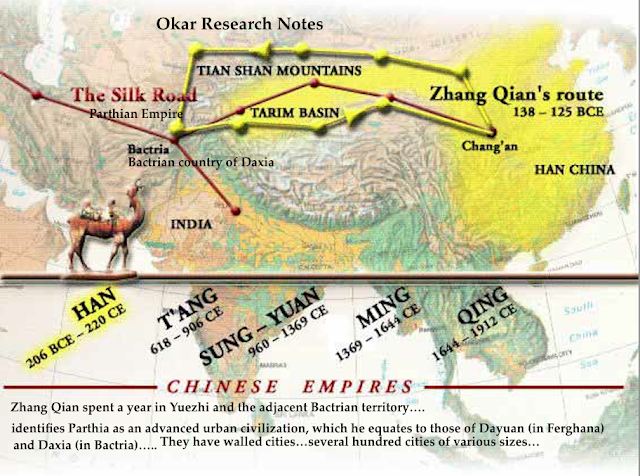 "The Chinese explorer Zhang Qian, who visited the neighbouring countries of Bactria and Sogdiana in 126 BC, made the first known Chinese report on Parthia. In his accounts Parthia is named "Ānxī" (Chinese: 安息), a transliteration of "Arsacid", the name of the Parthian dynasty. Zhang Qian clearly identifies Parthia as an advanced urban civilization, which he equates to those of Dayuan (in Ferghana) and Daxia (in Bactria)."......The Records of the Grand Historian (Taishi gong shu 太史公書, now usually known as the Shiji 史記 –

"Zhang Qian (Chang Chien; pinyin : Zhāng Qiān; simplified Chinese: 张骞; traditional Chinese: 張騫) was an imperial envoy to the world outside of China in the 2nd century BCE, during the time of the Han Dynasty. He was the first official diplomat to bring back reliable information about Central Asia to the Chinese imperial court, then under Emperor Wu of Han, and played an important pioneering role in the Chinese colonization and conquest of the region now known as Xinjiang.......Zhang Qian's travels are associated with the major route of transcontinental trade, the Silk Road. In essence, his missions opened up to China the many kingdoms and products of a part of the world then unknown to the Chinese. Zhang Qian's accounts of his explorations of Central Asia are detailed in the Early Han historical chronicles, Records of the Grand Historian or Shiji, compiled by Sima Qian in the 1st century BCE . The Central Asian sections of the Silk Road routes were expanded around 114 BC largely through the missions and explorations of Zhang Qian.Today Zhang Qian is considered a national hero."....Boulnois, Luce (2005). Silk Road: Monks, Warriors & Merchants. Hong Kong: Odyssey Books.

"Anxi is situated several thousand li west of the region of the Great Yuezhi (in Transoxonia). The people are settled on the land, cultivating the fields and growing rice and wheat. They also make wine out of grapes. They have walled cities like the people of Dayuan (Ferghana), the region contains several hundred cities of various sizes. The coins of the country are made of silver and bear the face of the king. When the king dies, the currency is immediately changed and new coins issued with the face of his successor. The people keep records by writing on horizontal strips of leather. To the west lies Tiaozi (Mesopotamia) and to the north Yancai and Lixuan (Hyrcania)." ......The Chinese explorer Zhang Qian, who visited the neighbouring countries of Bactria and Sogdiana in 126 BCE..... Zhang Qian quote, trans. Burton Watson 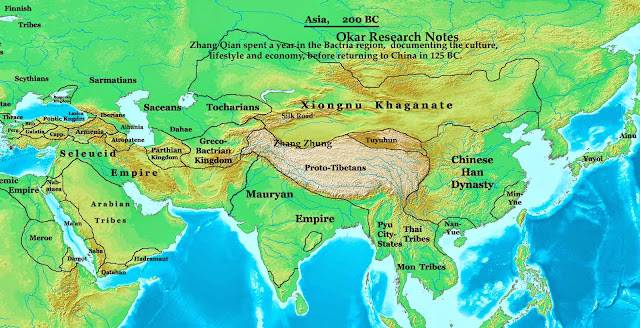 "The Parthian Empire (247 BC – 224 AD), also known as the Arsacid Empire, was a major Iranian political and cultural power in ancient Iran, also known as ancient Persia. Its latter name comes from Arsaces I of Parthia who, as leader of the Parni tribe, founded it in the mid-3rd century BC when he conquered the region of Parthia in Iran's northeast, then a satrapy (province) in rebellion against the Seleucid Empire. Mithridates I of Parthia (c. 171–138 BC) greatly expanded the empire by seizing Media and Mesopotamia from the Seleucids....There is scant archaeological evidence for the spread of Buddhism from the Kushan Empire into Iran proper. However, it is known from Chinese sources that An Shigao (fl. 2nd century AD), a Parthian nobleman and Buddhist monk, traveled to Luoyang in Han China as a Buddhist missionary and translated several Buddhist canons into Chinese."....Emmerick, R.E. (1983), "Buddhism Among Iranian Peoples", in Yarshater, Ehsan, Cambridge History of Iran 3.2, London & New York: Cambridge University Press,

"Daxia (Bactria)......Zhang Qian probably witnessed the last period of the Greco-Bactrian Kingdom, as it was being subjugated by the nomadic Yuezhi. Only small powerless chiefs remained, who were apparently vassals to the Yuezhi horde. Their civilization was urban, almost identical to the civilizations of Anxi and Dayuan, and the population was numerous.........'Daxia is situated over 2,000 li (1,000 kilometers) southwest of Dayuan (Ferghana), south of the Gui (Oxus) river. Its people cultivate the land, and have cities and houses. Their customs are like those of Dayuan. It has no great ruler but only a number of petty chiefs ruling the various cities. The people are poor in the use of arms and afraid of battle, but they are clever at commerce. After the Great Yuezhi moved west and attacked and conquered Daxia, the entire country came under their sway. The population of the country is large, numbering some 1,000,000 or more persons. The capital is Lanshi (Bactra) where all sorts of goods are bought and sold.....Zhang Qian identifies "Anxi" as an advanced urban civilization, like Dayuan (Ferghana) and Daxia (Bactria). " ........Shiji, 123, Zhang Qian quote, translation Burton Watson.

"In 126 BC the Chinese chronicler Zhang Qian visited Bactria (known as Daxia in Chinese) and described a kingdom that had collapsed while its large population and urban infrastructure remained:
'Daxia (Bactria) is located ... south of the Gui (Oxus) river. Its people cultivate the land and have cities and houses. It has no great ruler but only a number of petty chiefs ruling the various cities. The people are poor in the use of arms and afraid of battle, but they are clever at commerce. After the Great Yuezhi moved west and attacked Daxia, the entire country came under their sway. The population of the country is large, numbering some 1,000,000 or more persons. The capital is called the city of Lanshi (Bactra/Balkh) and has a market where all sorts of goods are bought and sold.'
By this time, the last Graeco-Bactrian king, Heliocles (ruled 150-125 BC), had moved his capital to the Kabul Valley. His successors would ally themselves with Greek kings in the East and become the western edge of the Indo-Greek kingdom until the last "western" Indo-Greek kings, Hermaeus, was routed by the Yuezhi around 70 BC.....Around 12 BC the Yuezhi were then to move further to northern India where they established the Kushan Empire.."....http://www.cemml.colostate.edu/