"Baraka is an ancient Sufi word, which can be translated "as a blessing, or the breath, or the essence of life from which the evolutionary process unfolds.".....

"Baraka means blessing in Hebrew, Arabic and Arabic-influenced languages.....
Baraka, also berakhah, in Judaism, a blessing usually recited during a ceremony
Baraka, also barakah, in Arabic Islam and Arabic-influenced languages such as Swahili, Urdu, Persian, Turkish, a blessing from God in the form of spiritual wisdom or divine presence. Also a spiritual power believed to be possessed by certain persons, objects, tombs.
Baraka, a rarely used French slang term for luck, derived from the Arabic word
Baraka Bashad, meaning "may the blessings be" or just "blessings be", originally a Sufi expression. 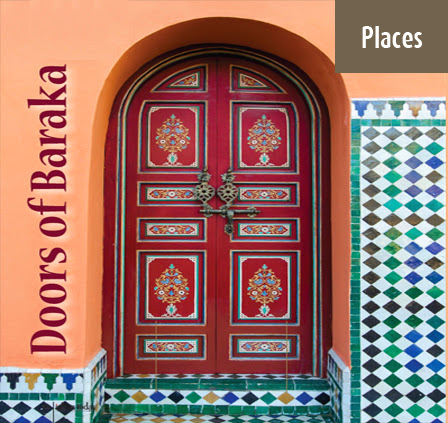 "Baraka is a prominent concept in Islamic mysticism, particularly Sufism. It pervades Sufi texts, beliefs, practices, and spirituality. Sufism emphasizes the importance of esoteric knowledge and the spiritual union with God through the heart. Baraka symbolizes this connection between the divine and the worldly through God's direct and intentional blessing of those that are most reflective of Him and his teachings......Baraka is not a state, it is a flow of blessings and grace. It flows from God to those that are closest to God, such as saints and prophets. Those that have received baraka are thought to have the abilities to perform miracles (karamat), such as thought-reading, healing the sick, flying, and reviving the dead....However, according to Abd al-Karīm ibn Hawāzin Qushayri, a prominent Sufi mystic, the use of these miracles and the actual possession of these abilities are not indicative of a saint's status, however, the performance of these miracles by prophets is important to establish credentials...."....... Ernst, Carl (1997). The Shambhala Guide to Sufism. Boston: Shambhala Publications, Inc.

"Blessing (Skt. adhiṣṭhāna; Tib. chinlap; Wyl. byin brlabs or byin gyis brlabs) — in The Tibetan Book of Living and Dying, the true meaning of blessing is defined as “a transformation in which your mind transcends into the state of the absolute.”

"His Holiness the Dalai Lama defines ‘blessing’ in his commentary on the second part of Kamalashila’s Stages of Meditation: The Tibetan word for blessing, chin lap, can be broken into two parts—chin means ’magnificent potential’ and lap means ‘to transform’. So chin lap means ‘transforming into magnificent potential.’ Therefore, blessing refers to the development of virtuous qualities that you did not previously have and the improvement of those good qualities that you have already developed. It also means decreasing the defilements of the mind that obstruct the generation of wholesome qualities. So actual blessing is received when the mind’s virtuous attributes gain strength and its defective characteristics weaken or deteriorate."

"Tsultrim Allione points out that in Tibetan Buddhism adhistana blessings are an important part of the esoteric transmission received from the guru and lineage. Receiving these blessings is dependent on the student having proper motivation, aspiration and intentionality (refer: Bodhicitta) and sufficient 'devotion' (Sanskrit: bhakti). These blessings may be received from the student's guru during initiation, from the yidam during deity yoga or simply from being in the presence of holy objects such as stupa."....Allione, Tsultrim (1986). Women of Wisdom. London 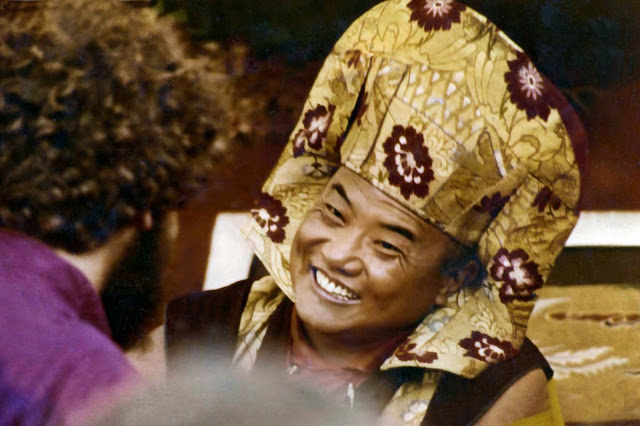 Tibetan: jin lab, contraction of jin gyi lab pa....... Jin gyi lab paae in Tibetan...... "The transformation of our mind from a negative state to a positive state, from an unhappy state to a happy state, or from a state of weakness to a state of strength, through the inspiration of holy beings such as our Spiritual Guide, Buddhas, and Bodhisattvas."....http://kadampa.org

"Baraka is a 1992 non-narrative documentary film directed by Ron Fricke. The film is often compared to Koyaanisqatsi, the first of the Qatsi films by Godfrey Reggio for which Fricke was cinematographer. Baraka was the first film in over twenty years to be photographed in the 70mm Todd-AO format, and the first film ever to be restored and scanned at 8K resolution.....The film is Ron Fricke’s follow-up to Godfrey Reggio’s similar non-verbal documentary film Koyaanisqatsi. Fricke was cinematographer and collaborator on Reggio’s film, and for Baraka he struck out on his own to polish and expand the photographic techniques used on Koyaanisqatsi....... Shot in 70mm, it includes a mixture of photographic styles including slow motion and time-lapse. To execute the film’s time-lapse sequences, Fricke had a special camera built that combined time-lapse photography with perfectly controlled movements. Locations featured include the Church of the Holy Sepulchre in Jerusalem, the Ryoan temple in Kyoto, Lake Natron in Tanzania, burning oil fields in Kuwait, the smouldering precipice of an active volcano, a busy subway terminal, tribal celebrations of the Masai in Kenya, and chanting monks in the Dip Tse Chok Ling monastery......The film features a number of long tracking shots through various settings, including Auschwitz and Tuol Sleng, over photos of the people involved, past skulls stacked in a room, to a spread of bones. It suggests a universal cultural perspective: a shot of an elaborate tattoo on a bathing Japanese yakuza precedes a view of tribal paint....A sequel to Baraka, Samsara, made by the same filmmakers, premiered at the Toronto International Film Festival in 2011 and released internationally in August 2012. Also shot in 70mm, Samsara explores an arguably darker, updated version of many of the same themes as Baraka.."

بارك الله فيك May Allah bestow his blessings on you."


"Abhisheka is the name given to a late Vedic rite of anointing government officials, particularly heads of state, at the time of their taking power or to mark a signal achievement. It is also the bathing ceremony and anointing performed on certain festival days for the temple deities......In the Indo-Tibetan Buddhist tradition, an abhisheka can be a method for performing esoteric transmission, a way to offer blessings of a lineage to participants, or it can be an empowerment to begin a particular meditation practice.[......It originally was used as a consecration rite. Water from the four oceans was poured out of golden jars onto the head of the royalty. It was used during the monarch's accession ceremony and also his investiture ceremony....The Abhiseka Ritual (灌頂 ) in Shingon Buddhism is the initiation ritual used to confirm that a student of esoteric Buddhism has now graduated to a higher level of practice. The kanji used literally mean "pouring from the peak", which poetically describes the process of passing on the master's teachings to the student.."......

"In Islam, Barakah or Baraka (Arabic: بركة ‎ ) is the beneficent force from God that flows through the physical and spiritual spheres as prosperity, protection, and happiness. Baraka is the continuity of spiritual presence and revelation that begins with God and flows through that and those closest to God. Baraka can be found within physical objects, places, and people, as chosen by God. This force begins by flowing directly from God into creation that is worthy of baraka. These creations endowed with baraka can then transmit the flow of baraka to the other creations of God through physical proximity or through the adherence to the spiritual practices of the Prophet Muhammad. God is the sole source of baraka and has the power to grant and withhold baraka."....Colin, G.S. "Baraka.". Encyclopaedia of Islam.

"Sufism: the teacher-student relationship in the madrasah s or the master-apprentice relationship in the urban craft guilds (from whose ranks the ṭarīqah s drew much of their membership). A popular preacher or revivalist, a healer, a visionary mystic, an ascetic or other holy man might draw a number of devoted listeners to hear lectures or to experience the charisma and spiritual energy (barakah ) of his presence. This might develop into a lasting relationship between a spiritual guide (murshid ), or elder (Arabic, shaykh ; Persian, pīr ), directing his seeker (murīd ). Prior to the twelfth century the relationship of such disciples to one another was typically unstructured, though they might travel together when accompanying the master on a journey and either do odd jobs or beg to support themselves. Some groups, such as the Karrāmīyah (based on the teachings of the ascetic preacher Ibn Karrām, d. 869), apparently evolved into more systematic movements."....

"ṬARĪQAH . The Arabic word ṭarīqah, meaning a road or path, also signifies a "mode" or "method" of action as well as a "way" or code of belief. In the context of Sufism, ṭarīqah refers to both the path of spirituality itself—"the way"—and the manner of traveling (sulūk ) along this path as the wayfarer passes through various stages (manāzil ) and stations (maqāmāt )...The Tariqah Al Qadiri al Budshishi is considered considered as a (Baraka) blessing from the Arif Bi’llah, (The knower of Allah), the teacher by the Idhn (permission) of the Messenger of Allah (S), our great grandfather, Maulana Shaykh Abdul Qadir Al Jilani, may Allah bless him and let us benefit from his Baraka.".....http://www.deenislam.co.uk