"In the first half of the 1st millennium, the Kashmir region became an important centre of Hinduism and later of Buddhism; later still, in the ninth century, Kashmir Shaivism arose....the tantric non-dual system of Kashmir Shaivism is a close cousin to Tibetan Tantric Buddhism.".....http://www.buddhistgeeks.com/2011/02/bg-207-the-tantric-cousins/#sthash.TrNAFagf.dpuf

"The Buddhist Mauryan emperor Ashoka is often credited with having founded the old capital of Kashmir, Shrinagari, now ruins on the outskirts of modern Srinagar. Kashmir was long to be a stronghold of Buddhism....Central Asian Buddhist monks are recorded as having visited the kingdom.....

"... the birth place of Garab Dorje not simply as 'Uddiyana' but as being close to Lake Kutra in the region of Dhanakosha; thus indicating present day North-eastern Kashmir (now Pakistan) - a region right in the middle between Chitral, Gilgit and Swat. ....The Words of My Perfect Teacher, pages 338-339

".....the concept of Uddiyana shifts away from the Swat Valley to a larger region: in fact the whole area of mountain ranges (and mountain peoples) from North-eastern Afghanistan to the Kailas range in the far West of Tibet..... in 1994, Robert Thurman cautiously formulates in his glossary to the Bardo Thödol that Uddyana (Tib., U rgyan) is a "Buddhist country in northwestern India (perhaps present-day Pakistan or Afghanistan)". [1994, The Tibetan Book of the Dead, page 273]....http://yoniversum.nl/dakini/uddiyana.html

“Starting about the 3rd century, Buddhism began to grow and spread outside India, adjusting to local cultures and the varying conditions of different countries. Buddhism began to take root in different countries in Asia as they came in contact with Buddhism from the early 2nd century B.C.E. Buddhism became nearly extinct in India, the country of its origin....a major reason for so many Indian Buddhist sages coming to Central Tibet from Kashmir, and notably, the famous Padmasambhava from Uddiyana, was the simple fact that Tibet then ruled much of this region. Nothing is really reported concerning Padmasambhava’s life in Kashmir. He lived, some say, with wandering yogis and sadhus, in exile from his homeland. Others report that it was during this period that he acquired knowledge and skill in various crafts. In Kashmir he earned the name Sthiramati, ‘the Youthful Genius......’.... Dharma Fellowship of H.H. the Gyalwa Karmapa, History of Buddhism

"....between “720 and 726 the King of Baltistan moved his seat to Gilgit out of fear of the Tibetan advance.... of tribute from the King of Kapisa in 748 ascertains that by that date Uddiyana had become a vassal state....King Lalitaditya-Muktapida, ruled between approx. 725 and 756 C.E.....as it was being built up, it was already being ravaged by raiding Tibetans, who were then the main power in Central Asia and scarcely yet converted to Buddhism.”...http://www.rinpoche.com/stories/ladakh.htm#_ftnref5

"Öd Sung, which means “Protected by Light......restored many Buddhist shrines...The Kingdom of Guge played a decisive role on the Tibetan Plateau after the fall of the Tubo Dynasty. It was called the heartland of Tibet; Yarlung and Lhasa were thought of as outlying villages or towns...The Kingdom of Guge lasted 16 generations...The ruins of the former capital of Guge kingdom are located at Tsaparang in the Sutlej valley, not far from Mount Kailash....Later, King Yeshe Öd inaugurated the second diffusion of Buddhism in the western reaches of Tibet, which was called “the backbone of Tibetan Buddhism.” He sent 21 youths to Kashmir to revive the knowledge of Buddhism after its fateful destruction."....http://www.rinpoche.com/

".....Martand Sun Temple was dedicated to Surya (Sun) god and is now in ruins. The ruins of the temple are located near Anantnag in Jammu and Kashmir.Martand is another Sanskrit name for Hindu Sun-god.....The Sun Temple at Martand in Jammu and Kashmir....The Martand temple is one of the important archaeological sites of the country. It was built around 500 AD. This temple has the typical Aryan structure as was present in Aryan Kashmir. ....built during 725-756 AD.The foundation of the temple is said to have been around 370-500 AD......blended the Gandharan, Gupta, Chinese, Roman, Syrian-Byzantine and Greek forms of architecture.....Srinagar is 53 km from Anantnag....http://en.wikipedia.org/wiki/Martand_Sun_Temple

A photo of ruins of the Surya Temple at Martand was taken by John Burke in 1868. 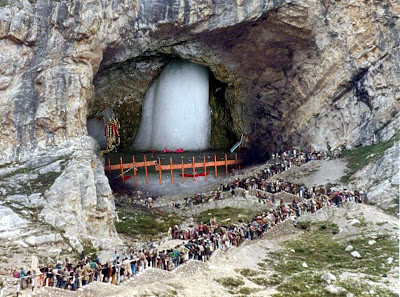 Amarnath cave is a very famous shrine in Kashmir......It is dedicated to Shiva. The cave is situated at an altitude of 3,888 m (12,756 ft), about 141 km (88 mi) from Srinagar....The shrine is considered to be one of the holiest shrines in Hinduism. The cave is surrounded by snowy mountains....ice stalagmite Shiva Linga .....the legendary king Aryaraja (ascribed fictional dates 32BCE-17CE) who used to worship a lingam formed of ice in Kashmir.

"When the king of Tibet, Drigum Tsanpo (Gri-gum btsan-po), was killed because of his persecution of the Bonpos, it became necessary to prevent the restless spirit of the murdered king, which had become a gshin or restless ghost, from doing mischief among the people. Therefore, three Bonpo practitioners were invited from Kashmir (Kha-che), Gilgit (Bru-sha), and Zhang-zhung, respectively, in order to perform the appropriate funeral rites to set the spirit to rest. This was because the local priests did not know how to do this. Such rites are known as 'Dur. All three of these Bonpos were foreigners from countries which lay to the west of Tibet. One of these Bonpos, presumably the one from Zhang-zhung, propitiated the deities Ge-khod (the patron deity of Zhang-zhung), Khyung (Garuda), and Me-lha (the god of fire). Thereby he was able to fly through the sky on his drum and divine mineral and metal deposits hidden beneath the earth. The second Bonpo, presumably the one from Gilgit, was skilled in divination and could foretell the future by means of the knots and threads, a practice known as ju-thig, and the use of scapula (sog dmar). Moreover, he made inspired oracular utterances (lha bka'). This would appear to locate the origin of this method of divination in Gilgit. The third Bonpo from Kashmir, a land famous for its Sanskrit learning among both Buddhists and Shaivites, was an expert in conducting the funeral ceremonies. Previously there had existed no philosophy of Bon in Tibet, but now Bon became mixed up with the Shaivite doctrines of the Tirthikas, that is, the Hindus of Kashmir, and therefore this became known as Deviant Bon (mu-stegs dbang-phyug-pa'i grub-mtha' 'khyar-ba bon)."....http://vajranatha.com/articles/traditions/dzogchen.html?showall=1