"Chak Chak is where Nikbanou, second daughter of the last pre-Islamic Persian ruler, Yazdegerd III of the Sassanid Empire, was cornered by the invading Arab army in 640 CE. Fearing capture Nikbanou prayed to Ahura Mazda to protect her from her enemies. In response to Nikbanou's pleadings, the mountain miraculously opened up and sheltered her from the invaders..... 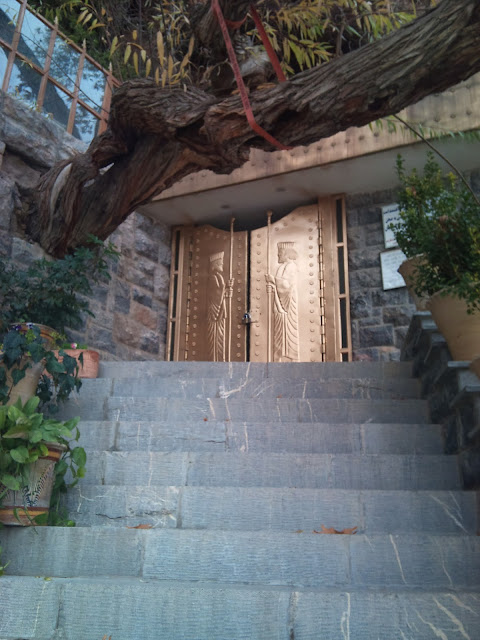 Entrance to the temple.....Chak Chak, the most sacred mountain shrine of Zoroastrianism...Inside the temple, a bowel collects the mountain’s ever-falling tears for Nikbanou, second daughter of the last pre-Islamic ruler, Yazdegerd III of the Sassanid Empire. 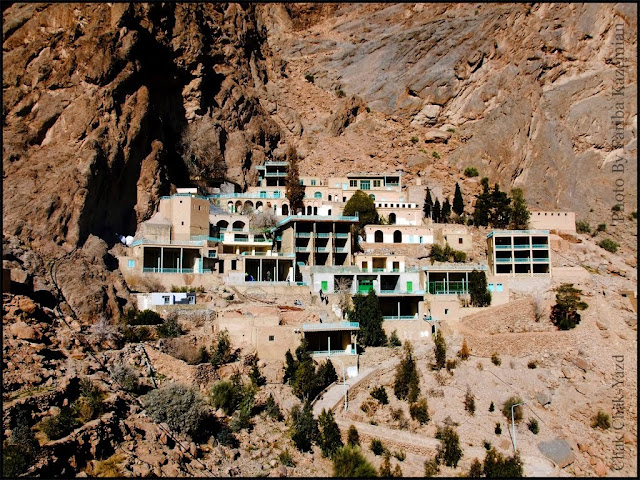 "Chak Chak (Persian: چک‌چک‎ "Drip-Drip"), also known as Pir-e Sabz (Persian: پیر سبز‎) "The Green Pir", consists of a pir perched beneath a towering cliff face in the desert of central Iran. It is the most sacred of the mountain shrines of Zoroastrianism. Located near the city of Ardakan in Yazd Province, Chak Chak serves as a pilgrimage point for pious Zoroastrians. Each year from June 14–18 many thousands of Zoroastrians from Iran, India and other countries flock to the fire temple at Pir-e Sabz....The shrine enclosure is floored with marble and its walls are darkened by fires kept eternally burning in the sanctuary....Notable features of Chak Chak include the ever-dripping spring located at the mountain. Legend has it that these drops are tears of grief that the mountain sheds in remembrance of Nikbanou. Growing beside the holy spring is an immense and ancient tree said to be Nikbanou's cane. Legend also has it that a petrified colorful cloth from Nikbanou was also visible in the rocks......"...http://en.wikipedia.org/wiki/Chak_Chak 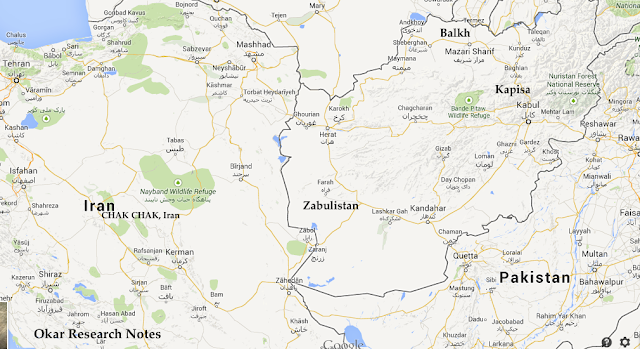 "Iran's Zoroastrians remember Arab conquest of Persia.....CHAK CHAK, Iran.....Dressed in white to symbolize purity, a priest recited from the Zoroastrian holy book at a shrine as members of this ancient pre-Islamic religion marked what they see as one of the most bitter events in Iran's history: the 7th century Arab conquest of Persia.....According to legend, Nikbanou, the youngest daughter of the last king of the Persian empire, took shelter in the mountain and prayed to Ahura Mazda for help from the attackers. Miraculously, the mountain opened up and gave her protection.....Near the shrine, a slowly dripping spring emerges from the mountain, giving the site its name (Chak Chak means drip drip in Persian). The legend says the spring is the mountain shedding tears in remembrance of Nikbanou. An immense tree stands nearby, said to have grown from Nikbanou's cane.....