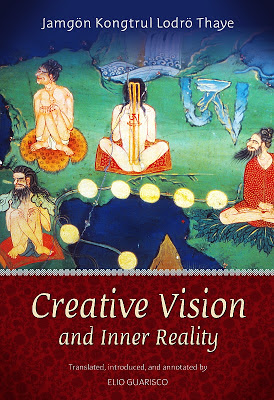 ......" a translation of Jamgon Kongtrul's renowned text the Essential Points of Creation and Completion,.....Easing the Beginner’s Way, written in verse at the age of twenty-seven by the amazing nineteenth century realized master and profound scholar Jamg ön Kongtrul Lodrö Thaye. Born in (1813-1899) in Kham in eastern Tibet, Kongtrul offered this advice based on his own experiential understanding of these two basic methods in Tibetan Buddhist tantric meditation.

Creation stage refers to the gradual imaginative process of recreating the environment as the mandala of oneself as the deity, while maintaining the awareness of the emptiness, or lack of real solid existence, of these and of all appearances......The aspiring practitioner’s way is eased by clear and extremely practical explanations.

Completion stage refers to the gradual dissolution of the visualization until the mind rests in the natural state, the inseperability of bliss end emptiness. Thus, through the first phase the goal is imagined and through the second it is directly experienced.... a state accomplished by, among other methods, concentration on one’s so-called vajra body and its channels, winds, and vital essences. Thus, in the first phase of this aspect of Vajrayana teaching the goal is imagined, and in the second it is directly experienced....The completion stage (Tibetan:dzog rim, (Wyl., rdzogs rim); Sanskrit:saṃpanna-krama) is one of the two stages of Anuttarayoga Tantra and Anuyoga. Completion stage may also be translated as perfection stage or fulfillment mode. The generation stage (Tibetan:kye rim; Sanskrit:utpatti-krama) generally precedes the completion stage.....Completion stage practices are associated with working with lung and the body....http://en.wikipedia.org/wiki/Completion_stage

In reality those who have some familiarity with Mahamudra and Dzogchen, the two systems that represent the ultimate sense and final goal of all teachings, will find in the text a subtle guide to deeper knowledge.

" The completion stage employs the "mystic vortices" of the body, the cakra, the subtle energy of the subtle body, the five pranas or vāyu, together with the channels, the nadi through which the energy flows in order to generate the 'great bliss' (Tibetan: Dem Chog or bde-mchog; Sanskrit: Maha-sukha) associated with bodhi or enlightenment.....

"...Fulfillment meditation includes "higher" techniques of meditation, which result in understanding of ultimate truth. But since relative and ultimate truth are two sides of the same coin, creative and fulfillment stages both lead to the same goal. Fundamentally, fulfillment meditation techniques entail the perception of emptiness in form, or the dissolution of form into emptiness: the dissolution of the creative stage vision into emptiness is technically a fulfillment stage practice. Examples of fulfillment mode yogas are dream yoga, the yoga of the mystic heat, Mahamudra meditation, the yoga of the apparitional body, the yoga of resurrection, clear light meditation, and the yoga of uniting skillful means [upaya] and perfect insight [prajna] to create the seed-essence of pure pleasure."......Dowman, Keith (1984). Introduction to Masters of Mahamudra.

"The perfection stage practices are often divided into those without signs (mtshan med) and those with signs (mtshan bcas). The former refer to practices in which the enlightened view is accomplished instantaneously, without any effort, “like a fish leaping out of the water.” The latter – the practices with signs – are generally the perfection stage practices known collectively as “channels and winds” (rtsa lung). Here, the practitioner works with a system of channels within one’s body, through which are moving the “winds” – subtle energies closely related to one’s mind."......Dalton, Jake (2003). 'Anuyoga Literature' in rNying ma rgyud 'bum

This volume contains a second text, Jamgön Kongtrul’s Advice to Lhawang Trashi, in which the neophyte meditator is instructed in an inspiring and direct manner on how to recognize the landmarks and pitfalls that may be encountered along the path... the practitioner is intimately instructed and kindly and affectionately encouraged on the signposts and pitfalls that may be encountered along the way....."Whatever you experience—suffering or afflictive emotion, Look directly at its nature: it vanishes into emptiness. Pristine awareness is none other than this. It is crucial to guard your own mind at all times By being ever joined to this mind of awareness. All practices are contained in the guarding of mind."......http://www.rigpedorjemtl.org/RDCMontreal/Teachings_EN.html

An Introduction and substantive notes by the translator are included in this useful and beautiful book.....The translator Elio Guarisco is a founding member of the International Shang Shung Institute of Tibetan Studies whose goal is to preserve and deepen the knowledge and understanding of Tibetan cultural traditions and has translated many works by the Institute’s founder, guide, and inspiration, Chögyal Namkhai Norbu....http://www.shangshungpublications.org

"Rimé is a Tibetan word which means "no sides", "non-partisan" or "non-sectarian". In a religious context, the word ri-mé is usually used to refer to the "Eclectic Movement" between the Buddhist Nyingma, Sakya, and Kagyu traditions, along with the non-Buddhist Bön religion, wherein practitioners "follow multiple lineages of practice." The movement was founded in Eastern Tibet during the late 19th century largely by Jamyang Khyentse Wangpo and Jamgon Kongtrul Lodro Thaye, the latter of whom is often respected as the founder proper. The Rimé movement is responsible for a large number of scriptural compilations, such as the Rinchen Terdzod and the Sheja Dzö.".....http://en.wikipedia.org/wiki/Rimé_movement

"Kongtrul Yönten Gyatso (1813-1899) was born in the hidden valley of Rongyap, which lies in front of Pema Lhartse in Drida Zelmogang in East Tibet, in the Water Bird year of the fourteenth calendrical cycle. His father, was Tendzin Yungdrung of the royal Khyung clan of accomplished Bonpo practitioners, and his mother was the yogini Tashi Tso.

Email ThisBlogThis!Share to TwitterShare to FacebookShare to Pinterest
Labels: Books