COSMIC MIRROR: "The original state likened to a primordial or cosmic mirror." "By primordial mirror we mean unconditioned." "This unconditioned state is liked to a mirror...is willing to reflect anything...and it remains as it is"..."free from bias: kill or cure, hope or fear." (pg 100) "...the quality of the cosmic mirror is that it is unconditioned, vast open space. ...it is an eternal and completely open space, space beyond question. In the realm of the cosmic mirror, your mind extends its vision completely, beyond doubt. Before thoughts, before the thinking process takes place, there is the accommodation of the cosmic mirror, which has no boundary-no center and no fringe. ...the way to experience this space is through the sitting practice of meditation...the realm of the cosmic mirror gives rise to wisdom-the wisdom of vast and deep perception, beyond conflict which is called drala. ...the ultimate level of experiencing drala is experiencing directly the wisdom of the cosmic mirror. When you experience that wisdom, then you are contacting the origin of the Shambhala lineage, the source of wisdom." (pg 174)....http://www.glossary.shambhala.org/#COSMICMIRROR

COSMIC EGG..."Birth of a God. There are several competing stories regarding Mithras’ birth. Some say that he was born, or reborn, from a rock (the petra genetrix) or a tree typically with the snake Oroboros wrapped around it. A bronze image of Mithras emerging from an egg-shaped zodiac ring, the "Cosmic Egg", was found associated with a temple on Hadrian's Wall (now at the University of Newcastle), while other stories have him being born of a virgin. An inscription from Rome suggests that Mithras may have been seen as the Orphic creator-god Phanes who emerged from the world egg at the beginning of time, bringing the universe into existence. This view is reinforced by a bas-relief at the Estense Museum in Modena, Italy, which shows Phanes emerging from an egg, surrounded by the twelve signs of the zodiac, in an image very similar to that at Newcastle. All stories agree that Mithras was born on December 255 - a date celebrated as the Dies Natalis Solis Invicti, or the “Birthday of the Unconquered Sun”. Interestingly, some depictions of his birth show shepherds in attendance, while others show only two torchbearers, but regardless the stories all concur that it was Ahura Mazda who arranged for his creation.."....http://www.romanarmy.net/mithras.shtml

"DRALA: (Tibetan: "dra", enemy or opponent; "la", above): "beyond the enemy". "Unconditioned wisdom and power of the world that are beyond any dualism, therefore Drala is above any enemy or conflict. It is wisdom beyond aggression. It is the self existing wisdom and power of the cosmic mirror that are reflected both in us and in our world of perception." "One of the key points in discovering drala principle is realizing that your own wisdom as a human being is not separate from the power of things as they are... reflections of the unconditional wisdom of the cosmic mirror. ... When you can experience those two things together...then you have access to tremendous vision and power in the world...connected to your own vision, your own being. We actually perceive reality. Any perception can connect us to reality properly and fully." (pg 103).....http://www.glossary.shambhala.org/#DRALA

"Mirrors from the Xin Dynasty (8-23 CE) often including the Queen Mother of the West."

"From the perspective of Dzogchen, the ultimate nature of all sentient beings is said to be pure, all-encompassing, primordial clarity or naturally occurring timeless clarity. This intrinsic clarity has no form of its own and yet is capable of perceiving, experiencing, reflecting, or expressing all form. It does so without being affected by those forms in any ultimate, permanent way. The analogy given by Dzogchen masters is that one's nature is like a mirror which reflects with complete openness but is not affected by the reflections, or like a crystal ball that takes on the colour of the material on which it is placed without itself being changed. The knowledge that ensues from recognizing this mirror-like clarity (which cannot be found by searching nor identified) is what Dzogchenpas refer to as rigpa."....http://en.wikipedia.org/wiki/Dzogchen

"Melong (Sanskr. ādarśa, darpaṇa; Tib. me long).....is a Tibetan term that means "mirror", "looking glass". The melong is a polyvalent symbol, divine attribute, and quality of the enlightened mindstream or bodhicitta."....http://en.wikipedia.org/wiki/Melong

"The mirror is an ancient symbol throughout Indian religions. In Indian iconography it may be understood as a symbol for clarity, wholesome or complete perception and 'primordial purity' (Tibetan: ka dag) of the mindstream or consciousness. The mirror is often depicted as an accoutrement of the hagiographical signification of fully realised Mahasiddha, Dzogchenpa and Mahamudra sadhaka. The mirror may be understood as a quality of the mindstream that denotes perceiving experience as it is without obscuration forded by klesha, etc."..... 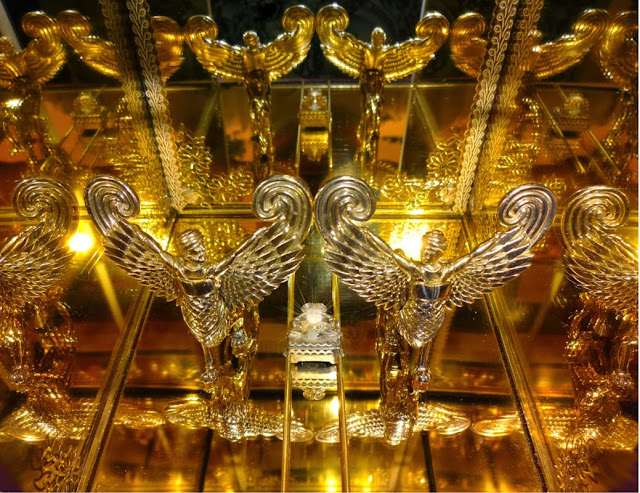 "The Palace of Mirrors" is a name given to the mind-world by Sufi mystics, while the Christian mystic Teresa of Avila who also observed this place called it the "Interior Castle" which she said was formed of the finest clear crystal that ascends into the golden light of the heart radiating at its center. "The Oracle of Solomon" shown in this scale model image, was created as a micro-cosmic representation of this inner spiritual realm, the sacred house of God. In the shape of a perfect cube, it had five walls overlaid in pure gold, which if properly polished, would have continually reflected the image of the Oracle into a cascading array of inter-contained reflections, each containing the whole.".....http://luxinterpreti.com/the-oracle-of-solomon.html

"The mind-world in Sufism is called ‘Aina Khana’, which means the Palace of Mirrors. Not only among man, but also the animal kingdoms one finds the phenomena of reflection......mind and heart are the same thing. If you call it a mirror, then the mind is the surface of the mirror and the heart is its depth; in the same mirror all is reflected.....for the mystic who calls the mind a mirror, the mind in the lower creation is also a mirror. It may not be so clear, yet it is a mirror.".....

Rumi.....
We are the mirror as well as the face in it.
We are tasting the taste this minute of eternity.
We are pain and what cures pain both.
We are the sweet cold water and the jar that pours.
I want to hold you close like a lute so we can cry out with loving.
You would rather throw stones at a mirror?
I am your mirror, and here are the stones.

Orofino G., "Mirror Divination. Observations on a Simile Found in the Kālacakra Literature", Proceedings of the 6th Seminar of the International Association for Tibetan Studies, Fagerness, 1992, The Institute for Comparative Research in Human Studies, Oslo, 1994, pp. 612-628.