"Orphism (Ὀρφικά) is the name given to a set of religious beliefs and practices originating in the ancient Greek and the Hellenistic world,as well as by the Thracians, associated with literature ascribed to the mythical poet Orpheus.....Orphics also revered Persephone and Dionysus or Bacchus. Orpheus was said to have invented the Mysteries of Dionysus. Poetry containing distinctly Orphic beliefs has been traced back to the 6th century BC....

The Thracians (Greek: Θρᾷκες, Latin: Thraci) were a group of Indo-European tribes inhabiting a large area in Central and Southeastern Europe. They were bordered by the Scythians to the north, the Celts and the Illyrians to the west, the Ancient Greeks to the south and the Black Sea to the east. ...Thracian people developed from a mixture of indigenous peoples and Indo-Europeans from the time of Proto-Indo-European expansion in the Early Bronze Age when the latter, around 1500 BC, mixed with indigenous peoples....developed advanced forms of music, poetry, industry, and artistic crafts.......By the 5th century BC, the Thracian presence was pervasive enough to have made Herodotus call them the second-most numerous people in the part of the world known by him (after the Indians)......a subculture of celibate ascetics called the Ctistae lived in Thrace, where they served as philosophers, priests and prophets......Some think that the Greek god Dionysus was refounded from the Thracian god Sabazios.......the Greek poet Xenophanes describes the Thracians as blue-eyed and red haired.......

CTISTAE..... The Ctistae (Greek: κτίσται) were a group/class in ancient Thracian culture. They led celibate lives, never marrying. They were held in a place of honor by the Thracians, with their lives being dedicated to the gods......Strabo, History VII.3.3: and there are some of the Thracians who live apart from woman-kind; these are called "Ctistae," and because of the honour in which they are held, have been dedicated to the gods and live with freedom from every fear; accordingly,,,,similar to the Essenes who lived in various cities but congregated in communal life dedicated to asceticism, voluntary poverty, daily immersion, and abstinence from worldly pleasures, including (for some groups) celibacy"......http://en.wikipedia.org

"Orphism......Heraclitus, a Greek philosopher of the sixth century BC, equated the rites of the Bacchants with those of the Magi, and commented: if it were for Dionysus that they hold processions and sing hymns to the shameful parts [phalli], it would be a most shameless act; but Hades and Dionysus are the same, in whose honor they go mad and celebrate the Bacchic rites, and of the Nightwalkers, Magi, Bacchoi, Lenai, and the initiated, all these people he threatens with what happens after death: for the secret rites practiced among humans are celebrated in an unholy manner. A papyrus from Derveni, near Thessalonika, belonging to the fourth century BC, we read about "incantations" of the Magoi that are able to placate daimones who could bring disorder... Therefore, the Magoi perform this sacrifice as if they would pay an amend, and initiates of Dionysus, first sacrifice to the Eumenides, like the magoi."......http://www.thedyinggod.com/chaldeanmagi/ 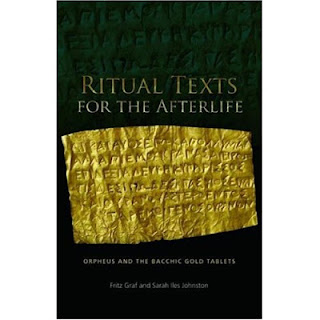 Ritual Texts for the Afterlife: Orpheus and the Bacchic Gold Tablets....Gold-leaf tablets found in graves from Thurii, Hipponium, Thessaly and Crete (4th century BC and after) give instructions to the dead.

"mysterious texts known as the "Orphic" gold tablets.......tablets are distinguished by the soul's declaration of its purity and its kinship to the gods, its escape from the "circle of grief" (probably a reference to reincarnation), and its expectation that Persephone, the Queen of the Dead, will bestow special honors and rights upon it due to its initiation into Bacchic mysteries.....during the mysteries that adherents were first given the directions about how to behave and what to do in the underworld that are found, in abbreviated form, on the Gold Tablets...the practice of putting epistomia (mouth coverings) on the dead. ."...http://www.bookrags.com/research/orphic-gold-tablets-eorl-10/

"...Totenpass (plural Totenpässe) is a German term sometimes used for inscribed tablets or metal leaves found in burials primarily of those presumed to be initiates into Orphic, Dionysiac, and some ancient Egyptian and Semitic religions. The term may be understood in English as a “passport for the dead......The Getty Museum owns an outstanding example of a 4th-century B.C. Orphic prayer sheet from Thessaly, a gold-leaf rectangle measuring about 1 by 1½ inches.....the inscriptions appear to speak of the unity of life and death and of rebirth, possibly in divine form. "....http://en.wikipedia.org/wiki/Totenpass

"Olympias, the mother of Alexander was involved in the enthusiastic Orphic rites, and the wild worship of Bacchus, (upon which account they were called Clodones, and Mimallones,) imitated in many things the practices of the Edonian and Thracian women about Mount Haemus......The Dionysian Mysteries were a ritual of ancient Greece and Rome which used intoxicants and other trance-inducing techniques (like dance and music) to remove inhibitions and social constraints, liberating the individual to return to a natural state.".....http://ancienthistory.about.com/library/bl/bl_text_plutarch_alexander.htm

"The main elements of Orphism differed from popular ancient Greek religion in the following ways:
characterizing human souls as divine and immortal but doomed to live (for a period) in a "grievous circle" of successive bodily lives through metempsychosis or the transmigration of souls.
by prescribing an ascetic way of life which, together with secret initiation rites, was supposed to guarantee not only eventual release from the "grievous circle" but also communion with god(s).
by warning of postmortem punishment for certain transgressions committed during life.
by being founded upon sacred writings about the origin of gods and human beings.


"ORPHIC GOLD TABLETS. The Orphic Gold Tablets are thirty-five small pieces of gold foil that have been found in graves scattered throughout ancient Greece and Rome. The tablets are inscribed with texts in ancient Greek that vary in length from one word to sixteen lines of poetry. The longer texts provide instructions and information to guide the soul of the deceased as it makes its way through the underworld, and to ensure that it receives preferential treatment from the rulers there.....The tablets were labeled Orphic in the early twentieth century because scholars thought their statements reflected the tenets of a religious system the ancient Greeks and Romans believed was invented and promulgated by the legendary musician Orpheus. However, newer discoveries of tablets that refer to bacchoi, to the "Bacchic one," and to thyrsoi (staffs carried by worshippers of the god Bacchus) indicate that the tablets are associated with mystery cults in which Bacchus (also called Dionysos) and his mother Persephone were the most important deities.".....http://www.bookrags.com/research/orphic-gold-tablets-eorl-10/