"Cherchen Man or Chärchän Man is a mummy discovered in the Taklamakan Desert, Xinjiang Uighur Autonomous Region, western China. Cherchen Man "died around 1000 BC". ...tests showed that he had probably roamed the Tarim Basin as early as the 11th C. BC......The mummy is described as: a 3,000 year old male, "6-foot-6-inch giant with Caucasian features", with hair that is "reddish brown flecked with grey, framing high cheekbones", an "aquiline" "long nose, full lips and a ginger beard", whose face is tattooed with "yellow and purple patterns", it wears "a red twill tunic and tartan leggings"; it is also described as looking "like a Bronze Age European", "a Celt".The Tarim Basin mummies are not limited to men. A female mummy was also found and is called Cherchen Woman."....http://en.wikipedia.org/wiki/Cherchen_Man

"....a warrior of the Caledonii tribe, the man's hair is reddish brown flecked with grey, framing high cheekbones, a long nose, full lips and a ginger beard. When he lived three thousand years ago, he stood six feet tall, and was buried wearing a red twill tunic and tartan leggings. He looks like a Bronze Age European. In fact, he's every inch a Celt. Even his DNA says so....DNA testing confirms that he and hundreds of other mummies found in Xinjiang's Tarim Basin are of European origin. We don't know how he got there, what brought him there, or how long he and his kind lived there for. But, as the desert's name suggests, it is certain that he never came out...... the weave of the cloth is the same as that of those found on the bodies of salt miners in Austria from 1300BC.......A female mummy wears a long, conical hat which has to be a witch or a wizard's hat. Or a druid's, perhaps? The wooden combs they used to fan their tresses are familiar to students of ancient Celtic art......At their peak, around 300BC, the influence of the Celts stretched from Ireland in the west to the south of Spain and across to Italy's Po Valley, and probably extended to parts of Poland and Ukraine and the central plain of Turkey in the east. These mummies seem to suggest, however, that the Celts penetrated well into central Asia, nearly making it as far as Tibet.....The Celts gradually infiltrated Britain between about 500 and 100BC......The eastern Celts spoke a now-dead language called Tocharian, which is related to Celtic languages and part of the Indo-European group. They seem to have been a peaceful folk, as there are few weapons among the Cherchen find and there is little evidence of a caste system.......Even older than the Cherchen find is that of the 4,000-year-old Loulan Beauty, who has long flowing fair hair and is one of a number of mummies discovered near the town of Loulan. One of these mummies was an eight-year-old child wrapped in a piece of patterned wool cloth, closed with bone pegs.......The Loulan Beauty's features are Nordic. She was 45 when she died, and was buried with a basket of food for the next life, including domesticated wheat, combs and a feather......From around 1800BC, the earliest mummies in the Tarim Basin were exclusively Caucausoid, or Europoid.....Many Uighurs consider the Han Chinese as the invaders......Best preserved of all the corpses is Yingpan Man, known as the Handsome Man, a 2,000-year-old Caucasian mummy discovered in 1995. He had a gold foil death mask - a Greek tradition - covering his blond, bearded face, and wore elaborate golden embroidered red and maroon wool garments with images of fighting Greeks or Romans. The hemp mask is painted with a soft smile and the thin moustache of a dandy. Currently on display at a museum in Tokyo, the handsome Yingpan man was two metres tall (six feet six inches), and pushing 30 when he died. His head rests on a pillow in the shape of a crowing cockerel. ".....http://uyghuramerican.org/old/articles/471/1/A-meeting-of-civilisations-The-mystery-of-Chinas-celtic-mummies/A-meeting-of-civilisations-The-mystery-of-Chinas-celtic-mummies.html 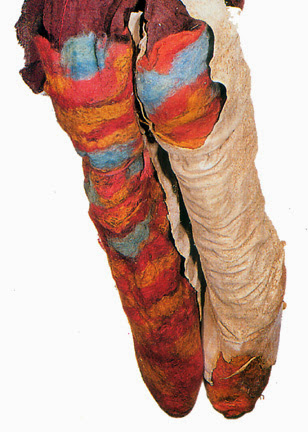 "......we see the mummified so called “Cherchen man” and his boots. These boots are still used by Central Asiatic riders....."....http://www.astroset.com/bireysel_gelisim/ancient/a40.htm

"Mair spied a bizarre sight. It was the outstretched body of a man just under six feet tall, dressed in an elegantly tailored wool tunic and matching pants, the colour of red wine. Covering the man's legs were striped leggings in riotous shades of yellow, red, and blue, ..."......http://www.freerepublic.com/focus/f-chat/1039559/posts

..."He wore on his feet patraongden boots from Shangshung, with golden flourishes. The sides of the boots were inlaid with diamonds....On his feet he wore Shangshung boots, Array of Nine Braveries, embroidered with beautiful rainbow designs, drawn designs of impressive armor, and bound by hard, solid meteoric iron nails......A splendid white silk scarf with golden rainbow designs was tied around its neck....On his head was a white turban "

"The body of the Cherchen man found in 1978, at a burial site in East Turkistan, was immaculately preserved. This man who lived about 3,000 years ago was most probably a shaman, guessing from the sun marking (tattoo) on the left side of his head. Most interestingly, the Cherchen Man was buried with no less than ten hats, even a conical “witch” hat – which is found as a common feature on several of these mummies. We saw that the Saka (Scythians) also wear pointed hats".........http://www.astroset.com/bireysel_gelisim/ancient/a40.htm 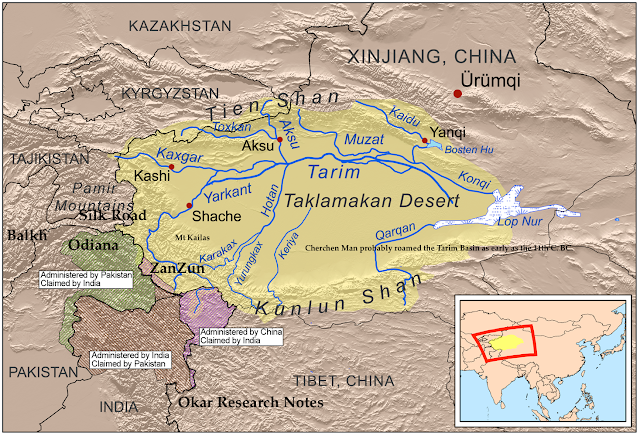 "Though it was commonly believed that the first contact between East Turkistan whose capital is Urumqi (Urumchi) and the West occurred relatively late in world history — around the middle of the second century B.C. — carbon dating has shown that the Cherchen man died 900 years earlier, indicating a much early expansion towards the west. The Uighur people who were expert riders could populate remote regions of the world due to their semi-nomadic lifestyle ..... Victor Mair, a specialist in the ancient corpses and co-author of “Mummies of the Tarim Basin”, said: Modern DNA and ancient DNA show that Turks, Uighurs, Kazaks, Krygyzs, all people of Central Asia are all mixed Caucasian and East Asian. The modern and ancient DNA tells the same story."............http://www.astroset.com/bireysel_gelisim/ancient/a40.htm

"The Tocharians or Tokharians (/təˈkɛəriənz/ or /təˈkɑriənz/) were inhabitants of medieval oasis city-states on the northern edge of the Tarim Basin (modern Xinjiang, China). Their Tocharian languages (a branch of the Indo-European family) are known from manuscripts from the 6th to 8th centuries AD, after which they were supplanted by the Turkic languages of the Uyghur tribes. Some scholars have linked the Tocharians with the Afanasevo culture of eastern Siberia (c. 3500–2500 BC), the Tarim mummies (c. 1800 BC) and the Yuezhi of Chinese records, most of whom migrated from southern Gansu to BACTRIA in the 2nd century BC and then later to northwest India where they founded the Kushan Empire.......".....http://en.wikipedia.org/wiki/Tocharians

"The Tocharians, living along the Silk Road, had contacts with the Chinese, the Persians, the Indians and Turkic tribes. They adopted Buddhism, which, like their alphabet, came from northern India in the 1st century of the 1st millennium, through the proselytism of Kushan monks. The Kushans and the Tocharians seem to have played a part in the Silk Road transmission of Buddhism to China. Many Tocharians apparently also practised some variant of Manichaeanism."......."Virtual Art Exhibit – The Tarim Basin". University of Washington. ........Xu, Wenkan 1996 "The Tokharians and Buddhism" In: Studies in Central and East Asian Religions 9