"Syncretism – the bringing together of different strands of belief and custom – was characteristic of the old Roman religions; in the mid-4th century, when the Christian leaders chose to make December 25 the birthday of Jesus, it became an act of Church policy. In a ceiling mosaic in the tomb of the Julii, in the necropolis under St Peter’s, we have an arresting visual image of the convergence of the old solar cult with the new religion. It shows the figure of Sol-Helios, the sun god, riding his chariot. Around 250, his image was touched up, to make the rays around his head resemble a cross.......http://blog.beliefnet.com/dreamgates/2012/12/happy-birthday-to-the-sun-of-god-2.html#ixzz2Fpzen9z8

"Non Sectarian Dharma.....Jamgon Kongtrul.......The Rimé movement is a Buddhist school of thought founded in Eastern Tibet during the late 19th century by Jamyang Khyentse Wangpo and Jamgon Kongtrul Lodro Thaye, the latter of whom is often respected as the founder proper. The antecedent to the Rimé is found in the writings and activities of Jetsun Taranatha Kunga Nyingpo, the 23rd Throne Holder of Jonang......The movement’s name is derived from two Tibetan words: ris (division, border) and med (refutation), which combined express the idea of openness to other Buddhist traditions, as opposed to sectarianism. The Rimé movement therefore is often mistaken as trying to unite the various sects through their similarities, which is not the case. Rather, Rimé recognizes the differences between traditions and appreciates them, while also establishing a dialogue to create common ground. It is important to preserve variety, and therefore Rimé teachers are generally quite careful to emphasize differences in thought, giving students many options as to how to proceed in their spiritual training......http://greatmiddleway.wordpress.com/non-sectarian-dharma/ 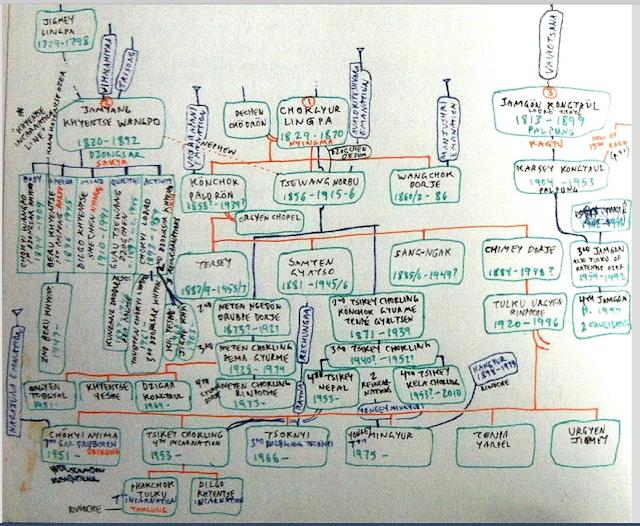 "Dzogchen is considered a uniquely Tibetan (i.e., not necessarily transplanted from India) practice which was incorporated by the later Buddhist schools. As such, it is also the ultimate practice of Bön, Tibet's indigenous religious tradition, one which has often suffered sectarian persecution. Fortunately, the Rimé movement gave non-Bön scholar lamas the space to explore Bön’s role in developing the practice of dzogchen....One day at UCLA’s research library I came across a reference to a “Guide to Bönpo Pilgrimage Places” with a map....http://tapamap.com/tibet/

"Some religious movements have embraced overt syncretism, such as the case of melding Shintō beliefs into Buddhism or the amalgamation of Germanic and Celtic pagan views into Christianity during its spread into Gaul, the British Isles, Germany, and Scandinavia.

JAPAN..."The vast majority of people in Japan who take part in Shinto rituals also practice Buddhist rituals......Due to the syncretic nature of Shinto and Buddhism, most "life" events are handled by Shinto and "death" or "afterlife" events are handled by Buddhism—for example, it is typical in Japan to register or celebrate a birth at a Shinto shrine, while funeral arrangements are generally dictated by Buddhist tradition...After the Meiji Imperial Restoration of 1868, the Emperor restored the sovereignty, and the new government institutionalized Shinto as the official state religion while implementing restrictive policies against Buddhism and other religions including Christianity. Tsurugaoka Hachimangu Shrine had to remove or thrown away all of its structures and objects associated with Buddhism.....

"Trungpa Rinpoche incorporated other elements into Shambhala tradition that he thought would be beneficial to practitioners. From the Bön religion, the lhasang ceremony is performed; other elements of shamanism play a role. From Confucianism comes a framework of heaven, earth, and man for understanding the proper relationship between different elements of compositions of all kinds. From Taoism comes the use of feng shui and other incorporations. From the Shinto tradition comes the use of kami shrines to honor natural forces in specific locales."......http://en.wikipedia.org/wiki/Shambhala_Buddhism

"In modern secular society, religious innovators sometimes create new religions syncretically as a mechanism to reduce inter-religious tension and enmity, often with the effect of offending the original religions in question. ...Classical Athens was exclusive in matters of religion. The Decree of Diopithes made the introduction of and belief in foreign Gods a criminal offence and only Greeks were allowed to worship in Athenian temples and festivals as foreigners were considered impure.

"Syncretism functioned as a feature of Hellenistic Ancient Greek religion although only outside of Greece. Overall, Hellenistic culture in the age that followed Alexander the Great itself showed syncretist features, essentially blending of Mesopotamian, Persian, Anatolian, Egyptian (and eventually Etruscan–Roman) elements within an Hellenic formula. The Egyptian god Amun developed as the Hellenized Zeus Ammon after Alexander the Great went into the desert to seek out Amun's oracle at Siwa....Such identifications derive from interpretatio graeca, the Hellenic habit of identifying gods of disparate mythologies with their own. When the proto-Greeks (peoples whose language would evolve into Greek proper) first arrived in the Aegean and on the mainland of modern-day Greece early in the 2nd millennium BCE, they found localized nymphs and divinities already connected with every important feature of the landscape: mountain, cave, grove and spring all had their own locally venerated deity. The countless epithets of the Olympian gods reflect their syncretic identification with these various figures. One defines "Zeus Molossos" (worshipped only at Dodona) as "the god identical to Zeus as worshipped by the Molossians at Dodona". Much of the apparently arbitrary and trivial mythic fabling results from later mythographers' attempts to explain these obscure epithets.

"Hinduism, Buddhism and Jainism in ancient India have made many adaptations over the millennia, assimilating elements of various diverse religious traditions....In China, most of the population follows syncretist religions combining Mahayana Buddhism, Taoism and elements of Confucianism. Out of all Chinese believers, approximately 85.7% adhere to Chinese traditional religion, as many profess to be both Mahayana Buddhist and Taoist at the same time. Many of the pagodas in China are dedicated to both Buddhist and Taoist deities.

"The term 'Shambhala Buddhism' was introduced by Sakyong Mipham Rinpoche in the year 2000 to describe his presentation of the Shambhala teachings, originally conceived by Chögyam Trungpa as secular practices for achieving enlightened society, in concert with the Tibetan Buddhist Kagyu and Nyingma lineages.....Shambhala Buddhism partly derives from the teachings of Shambhala, as originally proclaimed by Chögyam Trungpa......The Shambhala Buddhist sangha expresses this vision largely within Tibetan Buddhist concepts, terms, and practices, continuing its ties to contemporary Kagyu and Nyingma lineage holders, among them the Karmapa (Ogyen Trinley Dorje), Penor Rinpoche (d. March 27, 2009).....After the year 2000, with the merging of the secular teachings of Shambhala and the Buddhist teachings of Vajradhatu into Shambhala Buddhism, completion of Shambhala Vajrayana Seminary (which itself requires taking Buddhist refuge and bodhisattva vows, as well as Buddhist vajrayana samaya vows) became a condition for receiving the highest Shambhala teachings"....http://en.wikipedia.org/wiki/Shambhala_Buddhism

"As John Newman, one of the world's leading Kalachakra scholars, explains:........The Kalacakra, or "Wheel of Time," was the last major product of Indian Vajrayana Buddhism. All late Vajrayana Buddhism is syncretic - it takes elements from non-Buddhist religious traditions and assimilates them to a Buddhist context. However, in the Kalacakra tantra syncretism is unusually obvious and is even self-conscious—the tantra makes little effort to disguise its borrowings from the Śaiva, Vaisnava, and Jaina traditions. The basic structure of the Kalacakra system is itself non-Buddhist: the Kalacakra uses the ancient idea of the homology of the macrocosm and the microcosm as the foundation of its soteriology...."Islam in the Kalachakra Tantra" by John Newman. The Journal of the International Association of Buddhist Studies. Vol 21:2 pg 313

"The oldest religions of which we have any knowledge go back about 20-30,000 years. All over Eurasia archaeologists have found figurines of an Earth Mother Goddess ....Religion played a large role in the lives of the people of Sumeria, Ur, Babylon, Egypt, the Hittites, and the Assyrians. These were polytheistic religions with many gods and goddesses manifest in nature, in cities, in irrigation and agriculture, the hunt and war.....They were syncretic religions - that means they freely borrowed from one another and the same pantheon of gods and goddesses, sometimes with new names and stories of their exploits, was shared between the various civilizations.....These religions formed the precursors of religions in Greece, Zoroastrianism, Judaism, Islam and Christianity.....Zoroastrianism was the religion in Persia. Zoroaster (born in Balkh) lived c.628 B.C.-c.551 B.C. The religion is based on a dualism in the universe between good and evil. It introduced the idea of Hell and damnation for the wicked. It is still practiced today. Most believers live in India....Judaism, Islam and Christianity are also syncretic. They borrowed ideas of souls, heaven and hell, the last judgment, a dying god who is reborn to save believers, and many other beliefs from the earlier religions of Sumer, Ur, Babylon, Persia, Anatolia and Egypt."...http://www.roebuckclasses.com/101/lectures/neareast/religionmideast.htm