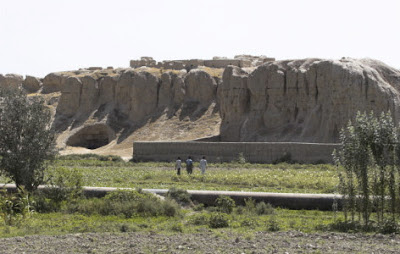 "Navbahar (also known as Nava Vihara) was a Buddhist stupa or monastery near the ancient city of Balkh in northern Afghanistan. The temple may have been an old Zoroastrian fire-temple.....Navbahar, the main monastery at Balkh became the center of higher Buddhist study for all of Central Asia. The Tokharian monk Ghoshaka was one of the compilers of the Vaibhashaka (a sub-division of the Sarvastivada School of Hinayana) commentaries on abhidharma and established the Western Vaibhashika (Balhika) School. Navbahar emphasized the study of primarily of the Vaibhashika (Tibetan: bye-brag smra-ba) abhidharma, admitting only monks who had already composed texts of the topic. Navbahar also housed a tooth relic of the Buddha, making it one of the main centers of Buddhist pilgrimage along the Silk Route from China to India.

"The Nava Vihāra (Sanskrit: नवविहार "New Monastery", modern Nowbehār, Persian: نوبهار‎) was two Buddhist monasteries close to the ancient city of Balkh in northern Afghanistan. The temples and monasteries of Nava Vihara are spread over a very large area about 20 kilometres (12 mi) south of Balkh above Chesme-ye Safā (Persian: چشمه صفا‎ "Clear Spring"), not far from the Koh e Alburz....Koh e Alburz, Romanized as Kuh i Elburz, Gory Koh-i-Elburz, Kohe Alborz, Kuh i Alborz (Persian: کوه البرز‎ high mountain) is a mountain a ridge of the Hindu Kush in Afghanistan, Balkh Province. The ridge is elongated to the south of the ancient city of Balkh, which is about 25 kilometers northwest from the city of Mazar-i-Sharif.... the two Buddhist monasteries as Nava Vihara Top i Ruslam (Persian: تپه رستم‎ Rustam hill or Rustam Hat) and Takht e Rustam (Persian: تخت رستم‎ Rustam's throne) and fire temple of Nava Vihara." 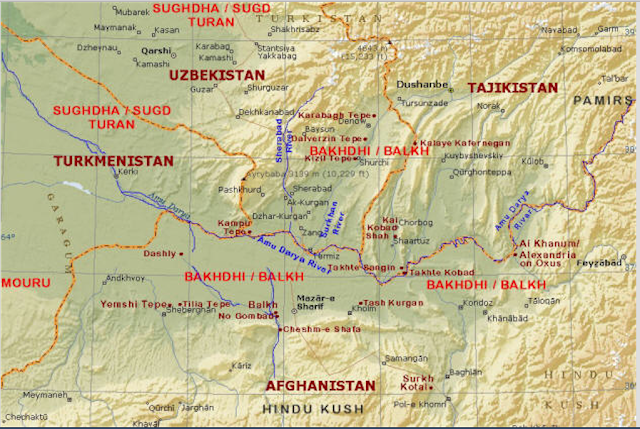 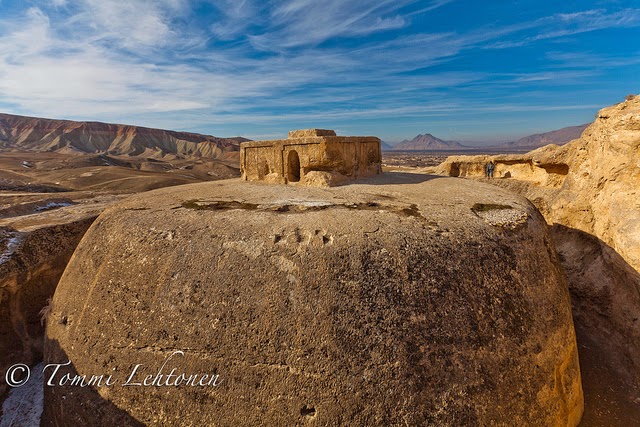 Takht-e-Rustam ....The thrown of the hero of the world. A buddhist stupa on a hill in Aybak, a medieval caravan stop, Samangan province in Northern Afghanistan.

"Geographer al-Qazwini (Athar-ul-Bilad) too refers to this great monastery. He records......“The Persians and Turks used to rever it (The temple of Nawabahar) and perform pilgrimages to it, and present offerings to it. Its length was one hundred cubits, its breadth the same, and its height somewhat more, and the care of it was invested in the Baramika. The Kings' of India and China used to come to it, and when they reached it they worshipped the idol, and kissed Barmak's hand, and Barmak's rule was paramount in all these lands. And they ceased not, Barmak after Barmak, until Khurasan was conquered in the days of Uthman b. Affan and the guardship of the temple came at length to Barmak, the father of Khalid”.....http://ikashmir.net/rktamiri/barmarks.html

"From the Memoirs of Xuanzang, we learn that, at the time of his visit in 630, there were in Balkh about a hundred Buddhist monasteries, with 30,000 monks, and that there was a large number of stupas, and other religious monuments and that Buddhism was flourishing in the Bactrian portion of Western Turk empire. He also described it as having strong links with the Kingdom of Khotan in the Tarim Basin. The temple was led by Kashmiris called Pramukh (who, under the arabized name of Barmak, came to be known as the Barmakids)...."

"The Umayyads captured Balkh in 663 from the Turki-Shahis who had taken over the territory from the Western Turks. Although some Buddhists and even an abbot of Navbahar converted to Islam, most Buddhists kept their faiths and accepted dhimmi status, as loyal non-Muslim protected subjects within an Islamic state by paying a poll tax jizya in lieu of the Zakat tax levied and compulsory military service for Muslims, and the monastery remained open and functioning."

"Al-Biruni, a Persian scholar and writer in service to the Ghaznavid court, reported that, around the start of the 2nd millennium, the Buddhist monasteries in Bactria, including Navbahar, were still functioning and decorated with Buddha frescoes. A curious notice of this building is found in the writings of Arabian geographer Ibn Hawqal, an Arabian traveler of the 10th century."