"....the Avesta is a compilation from various sources, and its different parts date from different periods and vary widely in character. Only texts in the Avestan language are considered part of the Avesta......There are strong linguistic and cultural similarities between the texts of the Avesta and those of the Rigveda; the similarities are assumed to reflect the common beliefs of Proto-Indo-Iranian times, with the differences then assumed to reflect independent evolution that occurred after the pre-historical split of the two cultures. 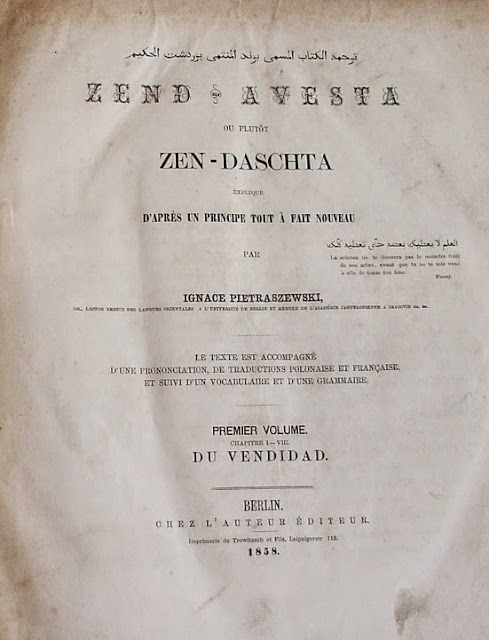 "The original texts of the Avesta were not written by Persians, as they are in a language which was not used in Persia, they prescribe certain customs which were unknown to Persia, and proscribe others which were current in Persia. They were written in Media, by the priests of Ragha and Atropatene, in the language of Media, and they exhibit the ideas of the sacerdotal class under the Achaemenian dynasty.".......http://www.dli.gov.in/data/upload/0013/002/TXT/00000054.txt

"The Kambojas (Sanskrit: कम्बोज, Kamboja; Persian: کمبوہ‎, Kambūh) were a kshatriya tribe of Iron Age India, frequently mentioned in Sanskrit and Pali literature. Modern scholars conclude that the Kambojas were an Avestan speaking Eastern Iranian tribe at the boundary of the Indo-Aryans and the Iranians, and appear to have moved from the Iranian into the Indo-Aryan sphere over time. The Kambojas migrated into India during the Indo-Scythian invasion from the 2nd century BCE to 5th century CE. Their descendants controlled various principalities in Medieval India.

"The Avesta is all that remains of the 21 Nards, and these were only part of an even larger collection of works that existed before Alexander destroyed the sacred texts of the Persians, as Diodorus, the historian, relates. The Zoroastrian bible was probably complete by about 400 BC. The Persian archives were held at Persepolis yet Alexander uncharacteristically burnt the city and murdered many of Persia’s leading scholars, though they had willingly surrendered exoecting mercy. The Dinkard, a ninth century Persian work says there were only ever two copies of Zoroaster’s monumental work, one of which was burned and the other was confiscated by the Greeks. 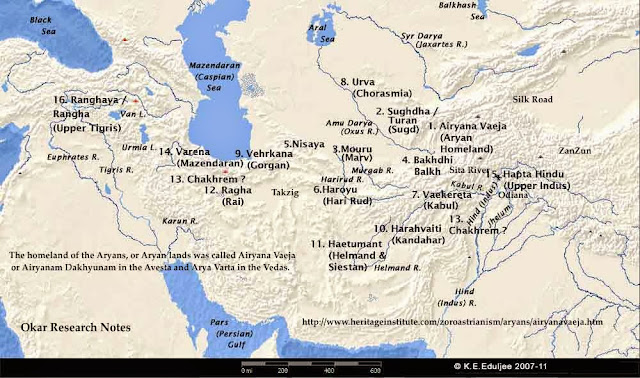 "The name of province or country appear in Old Persian inscriptions (B.h.i 16; Dar Pers e.16; Nr. a.23) as Bāxtri, i.e. Bakhtri. It is written in the Avesta Bāxδi. From this latter came the intermediate form Bāxli, Sanskrit Bahlīka, Balhika ‘Bactrian,’, Armenian Bahl, and by transposition, the modern Persian Balx, i.e. Balkh"

"The Aryas ('the noble ones') are said in the Avesta to have had their original home in the fair land of Airyana-Vaeja (the Cradle-land of the Aryas), which had been 'the first among the lands' created by Mazda. It was at the centre of the Earth and in its very centre stood the mountain Hara-bareza ('Alborz'). This description closely corresponds with the Hindu description of 'the land of the Gods' with Mount Meru at its centre.

"They had a well developed religious system, which had been successively taught to them by great Teachers anf by Royal-Sages from time to time. Many of these Teachers have been mentionsd by name, and a few of them, whose names are also mentioned in the Vedic Religion, have fairly detailed accounts attached to them......One of the earliest of these Royal-Sages belonging to the common tradition is Yima (king Jamshid in shah-name) 'the King,' the son of Vivanghana. In the Avesta He is the great Ruler and Teacher of the Golden Age. He was warned by Mazda about the impending destruction of the wicked world by snow and ice, and He was commanded to build a vara, or underground enclosure, and to take there a set of specially chosen people, together, with the seeds of the finest trees, the best fruits and the most fragrant flowers, and also a pair each of the best and the most useful animals.

"Another Sage belonging to this common tradition may also be mentioned. He is Kava-Ushan, who is one of the Royal-Sages of the Avesta. He was a holy King who overcame the forces of evil by His prayers, and He was specially famed for the glorious halo that surrounded Him, whence He is also known by the epithet ash-varecao (of full radiance). He is also said to have acquired miraculous powers of flying through the air, with the help of a heavenly bird.

"A third Royal-Sage may also be mentioned. He is Thrae-taona (Faridun in Shah-name). He seems to be specially associated with the curing of diseases with the help of 'spells' (mantras), and is the great physician and healer. These points are also associated with Him in the Atharva-Veda, where He is called Trita. In both traditions He bears the patronymic name of Athwya and is closely associated in both with Haoma and the preparation of the Drink of Immortality.

".....the legends and the myths of the Avesta and the Veda to get some idea of this Ancient Faith. Many names are common between the two Scriptures and what is really remarkable, several of these names are used in diametrically opposite sense. This latter fact many point to religious troubles between the two sections of the Aryan race....http://www.farvardyn.com/zoroaster.php

"In the Avesta the great Teachers of the Paoiryotkaesha (the Ancient Faith) have been invoked, and a good many of them have been mentioned by name. This Ancient Faith has been named the Mazdayasna Faith-the Faith that worships Mazda, the Great Lord of All. The Religion of Zarathustra bears the same name, but which the epithet Zarathushtrish (i.e. taught by Zarathushtra) added to it.

"Avestan is an East Iranian language known only from its use as the language of Zoroastrian scripture, i.e. the Avesta, from which it derives its name. Its area of composition comprised – at least – Arachosia/Sīstān, Herat, Merv and Bactria.The Yaz culture has been regarded as a likely archaeological reflection of early East Iranian culture as described in the Avesta. Its status as a sacred language has ensured its continuing use for new compositions long after the language had ceased to be a living language.

"Avestan, the language of the oldest portions of the Zoroastrian Avesta, was one of the old Iranian languages, and is the oldest attested member of the Eastern Iranian branch of the Iranian language family. Pashtuns and Tajiks are the modern-day descendants of the ancient Bactrians, evidence of this has been illustrated through DNA testing. Linguistically speaking, the Pashto Language itself contains many ancient Greek words now virtually extinct from modern day Greek. 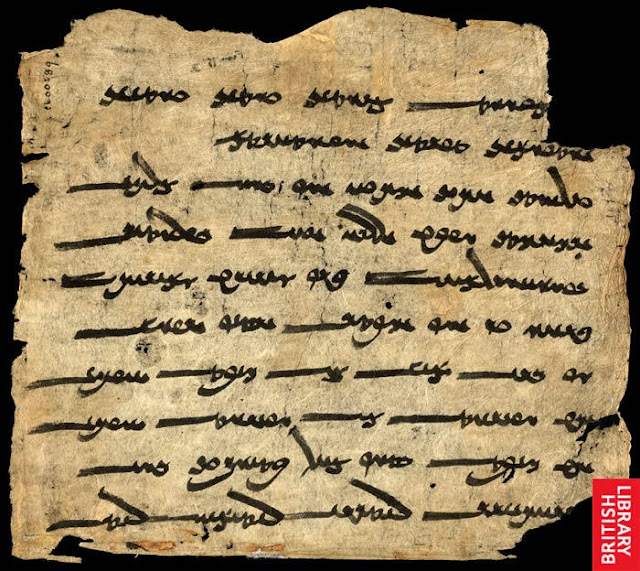 Zoroastrian prayer, the Ashem Vohu.....British Library....The earliest surviving Avestan manuscript (the Avesta being the Zoroastrian scriptures), is a the 10th century CE fragment found in Dunhuang, China. The next earliest extant Avestan texts come from Iran and India and date from the end of the 13th century ACE - three hundred years after the Sogdian manuscript was written. ....The manuscript is presently housed in the British Library.

"While the Avesta was composed in a group of related ancient Indo-Iranian languages informally called the Avestan languages, the Zand was composed in languages that were current after the fall of Macedonian rule in the second century BCE. The final rendition of these commentaries was in a relatively modern language called Pahlavi or Middle Persian, the language of Persia and Iran from the 2nd to the 7th century AC.

"The first report of written Avestan texts comes from the Middle Persian language (Pahlavi) writer Arda Viraf, in his book the Arda Viraf Nameh (3rd or 4th century CE?). In it, he writes that the the Persian Achaemenian kings (c. 600 - 300 BCE) commissioned the commitment of the Avesta to writing on hides and deposited the texts in the royal library at Ishtakhr. "...the entire Avesta and Zand, written on hides with gold ink, were deposited in the archives at Stakhar Papakan (Ishtakhr, near Persepolis and Shiraz in Pars province)." Masudi gives the number of hides as 12,000.....

"Pishdadian(Persian: پیشدادیان) were first dynasty of Aryan people in the Shahnameh, Avesta and Iranian mythology..Pishdadi Kings in Shahnameh......In tradition and folklore, Jamshid is described as having been the fourth and greatest king of the epigraphically unattested Pishdadian Dynasty (before Kayanian dynasty). This role is already alluded to in Zoroastrian scripture (e.g. Yasht 19, Vendidad 2), where the figure appears as Avestan language Yima(-Kshaeta) "(radiant) Yima," and from which the name 'Jamshid' then derives......http://en.wikipedia.org/wiki/Pishdadian_Dynasty