"The name 'Persia' comes from 'Pers' which is in turn the European version of 'Pars' - an area that is today a province of Iran. .....2,500 years ago, when the present provinces of Iran were kingdoms [at one time Iran (then Airan) consisted of 240 kingdoms], Pars was known as Parsa, and the kings of Parsa established an empire that came to be known in the West as the Persian Empire - the largest empire the world have ever known to that point. In those days, Parsa was the dominant kingdom of all the Iranian or Aryan kingdoms."...http://www.heritageinstitute.com/zoroastrianism/iranpersia/ 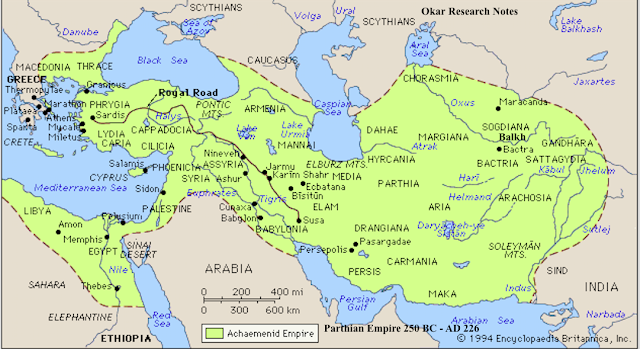 "According to the Kār-nāmag..........Middle Persian 'Book of the Deeds of Ardashir'....... "there were in the territory of Iran two hundred and forty princes" at the beginning of Iranian Parthian Empire (247 BC – 228 AD) .....The dominant kingdom of Iran has at various times been Balkh (Bactria), Mada (Media), Parsa (Persia), Parthava (Parthia) and then Persia again. The king of the dominant kingdom was called king-of-kings (shah-en-shah in modern terms) - an emperor.".......http://www.heritageinstitute.com/zoroastrianism/iranpersia/

...."King of Kings" (šar šarrāni) .....The Persian title of a king of kings is shahanshah....associated especially with Zoroastrian Persian Achaemenid Empire......the terms used for Hindu kings to represent king of kings include Rajadhi raja , chakravarthi, Maharaja ,Perarasu,etc.......In the Pali Tripitaka, Buddha is sometimes compared to the worldly Emperor (Chakravarti), the Universal King, or the secular "King of Kings". But Buddha is also seen as the "King of the Dharma" or Dharma-raja......The first written record of its consistent use dates to Iranian Kings of the Persian Empire or Iranian High Kings of the Persian Empire (pronounced Shahanshah or Great Shahanshah). Because the Persian kings ruled in a format where conquered kings were allowed to rule over provinces (Satraps), while being loyal to the King of kings of the Persian Empire, the fact that the Persian kings ruled over other kings gave them the title king of kings...... 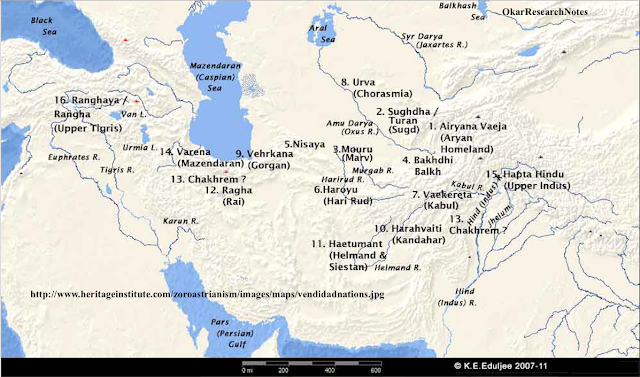 "...'Iran' is a relatively modern contraction of the name Airyana Vaeja (the ancient homeland of the Airya or Aryans).....Over time, Airyana Vaeja became Airan-Vej, then Eran-Vej or Airan-Vej ...... then Eran or Airan, and finally Iran......While we do not know the precise location of the originl Aryan homeland, Airyana Vaeja, the Central Asian lands that are today part of Tajikistan, north-eastern Afghanistan, and southern Uzbekistan - all east of the northeast corner of present day Iran - are strong candidates....From Airyana Vaeja the original Aryan homeland (possibly quite small in size and extent), the Aryans migrated to surrounding lands. In doing so, they formed fifteen additional kingdoms listed in the Avesta, the Zoroastrian scriptures, in a book called the Vendidad.....the migrations extended along the Aryan Trade Roads known commonly as the Silk Roads.".....http://www.heritageinstitute.com/zoroastrianism/iranpersia/

"During the reign of the subsequent Kayanian dynasty (Zarathushtra lived during the reign of Kayanian King Vishtasp) which assumed dominance over the Aryan nations, the Shahnameh no longer has the capital of Greater Iran located near Sari, but rather in Balkh (Bactria), in the north of Afghanistan today....Ancient Airyana Vaeja grew to become a federation of nations that classical Greek historian and geographer Strabo called Aryana/Ariana (Avestan Airyana). Strabo describes the different kingdoms/nations that constituted Aryana describing its borders as stretching from the Indus to Persia-Media - linked, as he noted, by a common language native to the groups...."........http://www.heritageinstitute.com/zoroastrianism/iranpersia/

"Balkh / Bactria & King Vishtasp.....The fourth Vendidad nation is Bakhdhim / Bakhdhi / Bakhdi / Balkh located in Northern Afghanistan. Among the first "hearers and teachers" of Zarathushtra's message listed in the Farvardin Yasht (13.99) was King Vishtasp. Later texts state that King Vishtasp, a king of the Kayanian dynasty, was king of Bakhdhi/Balkh, and that Zarathushtra died in Bakhdhi/Balkh, killed by a Turanian. In these texts, the Amu Darya (Oxus) river formed the north-eastern border between ancient Bakhdhi and Turan (Sugd). Further upstream, a portion of the Amu Darya river ran through Bakhdhi. .....Balkh became the capital city of the Kayanian kings and ancient Airan, the successor state to Airyana Vaeja and the predecessor state to modern Iran.".... http://www.heritageinstitute.com/zoroastrianism/aryans/location.htm

"Persian Rise to Dominance Over the Aryan Nations......About 2,500 years ago, the Parsa (Persians) rose to power to became the dominant Aryan kingdom. Dominance amongst the Aryans groups passed from the Medes to the Parsa (Persians) when the Achaemenian king Cyrus the Great (Cyrus II) established the Persian Empire in the sixth century BC by bringing the nations within the Aryan Empire ruled by the Medes under overall Persian rule. The dominance of the Aryan federation of nations had passed from Feridoon's dynasty (in Gorgan-Mazandaran, i.e. central-north Aryana) to the Kayanians (in Balkh i.e. mid-eastern Aryana) to the Medes (in north-west Aryana) and now to the Persians (in south-western Aryana).".......http://www.heritageinstitute.com/zoroastrianism/iranpersia/

"The West, influenced as it was by Greek and Latin literature, continued to call Eran 'Persia', presumably out of habit or because the rulers of Iran were Persians. That Western tradition continued into the last century until the reign of Iranian king, Reza Shah, founder of the Pahlavi dynasty. In 1935 AD, Reza Shah asked those countries with whom Iran had diplomatic relations, to stop using the name Persia and to formally refer to his country as Iran. Some Euro-centric map-makers and authors ignored this formal request and continued to use Persia as the name instead of Iran."..........http://www.heritageinstitute.com/zoroastrianism/iranpersia/ 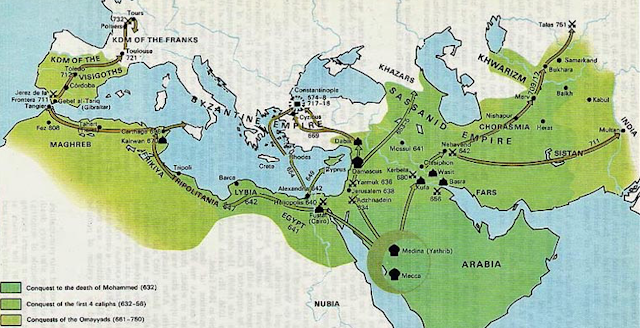 "In the 7th century AD, the Arabs conquered Iran and converted the mainly Zoroastrian population to Islam. The Arabs pronounced the name Pars as Fars (because Arabic does not have the 'p' sound).....While the words Parsi and Farsi are synonymous, today the Arabized name Farsi is used to mean the Persian language. The initial wave of Zoroastrian refugees who fled to India after the Arab invasion of Iran, now use of the authentic name 'Parsi' as their ethnic group name. ".............http://www.heritageinstitute.com/zoroastrianism/iranpersia/

"The Vendidad.....Today, there is controversy over historical development of the Vendidad. The Vendidad is classified by some as an artificial, young Avestan text. Its language resembles Old Avestan. The Vendidad is thought to be a Magi (Magi-influenced) composition......The Vendidad consists of 22 fargards containing fragments of discussions between Ahura Mazda and Zoroaster.......some consider the Vendidad a link to ancient early oral traditions, began - perhaps substantially - before the formation of the Median and Persian Empires, before the 8th century B.C.....The name of the texts is a contraction of the Avestan language Vî-Daêvô-Dāta, "Given Against the Daevas (Demons)", and as the name suggests, the Vendidad is an enumeration of various manifestations of evil spirits, and ways to confound them." ....Kellens, Jean (1989). "Avesta". Encyclopedia Iranica

"Daeva (daēuua, daāua, daēva) is an Avestan language term for a particular sort of supernatural entity with disagreeable characteristics. In the Gathas, the oldest texts of the Zoroastrian canon, the daevas are "wrong gods" or "false gods" or "gods that are (to be) rejected.......Daeva, the Iranian language term, should not be confused with the devas of Indian religions. While the word for the Vedic spirits and the word for the Zoroastrian entities are etymologically related, their function and thematic development is altogether different. The once-widespread notion that the radically different functions of Iranian daeva and Indic deva (and ahura versus asura) represented a prehistoric inversion of roles is no longer followed in 21st century academic discourse....In the Rigveda (10.124.3), the devas are the "younger gods", in conflict with the asuras, the "older gods". There is no such division evident in the Zoroastrian texts....Old Avestan daēuua or daēva derives from Old Iranian *daiva, which in turn derives from Indo-Iranian *daivá- "god," reflecting Proto-Indo-European *deiu̯ó with the same meaning.".....https://en.wikipedia.org/wiki/Daeva

"Kār-nāmag........KĀR-NĀMAG Ī ARDAŠĪR Ī PĀBAGĀN, a short prose work written in Middle Persian... written in the Sassanid period (226-651 AD)...... It narrates the Sasanian king Ardašīr I’s own life story—his rise to the throne, battle against the Parthian king Ardawān, and conquest of the empire by the scion of the House of Sāsān, as well as episodes concerning his heir Šābuhr and the latter’s son, Ohrmazd. .....http://www.iranicaonline.org/articles/karnamag-i-ardasir