"White Tārā is also known as Sita Tārā - the Sanskrit sita simply means white or pure, and is also a name for the planet Venus."

Sita (Nepali:सीता, also spelled Sîta, Seeta or Seetha.....is the central female character of the Hindu epic Ramayana.....She is the consort of the Hindu god Rama (avatar of Vishnu) and is an avatar of Lakshmi, goddess of wealth and wife of Vishnu. She is esteemed as a paragon of spousal and feminine virtues for all Hindu women. Sita is known for her dedication, self-sacrifice, courage and purity......Sita is described as the daughter of the earth goddess Bhūmi and the adopted daughter of King Janaka of Mithila and Queen Sunayna. In her youth, she marries Rama, the prince of Ayodhya."

"Chitral is drained by the Kunar River which flows southward, through Afghanistan, to meet the East flowing Kabul River, which in times past, was known as the Sita, or White River.".....http://www.dharmafellowship.org/library/essays/uddiyana.htm

"The Sita of the Ramayana may have been named after a more ancient Vedic goddess Sita, who is mentioned once in the Rigveda as an earth goddess who blesses the land with good crops. In the Vedic era, she was one of the goddesses associated with fertility. A Vedic hymn (Rig Veda 4:57) recites:
“Auspicious Sita, come thou near;
We venerate and worship thee
That thou mayst bless and prosper us
And bring us fruits abundantly."
Rig-Veda Samhita (c. 1200 BC) is the oldest of the four vedas and consists of 1028 hymns praising the ancient gods.

"In the Harivansha Purana, Sita has been invoked as one of the names of goddess Arya:
“ O goddess, you are the altar's center in the sacrifice,
The priest's fee
Sita to those who hold the plough
And Earth to all living being.


"The Ramayana tells the story of Prince Rama who was sent into exile in the forest with his wife, Sita, and his brother, Lakshamana......Sita was abducted by the evil demon Ravana but ultimately rescued by Prince Rama with the help of the Monkey God, Hanuman......The story is written in 24,000 couplets, a Sanskrit epic poem ascribed to the Sanskrit poet Valmiki.....It is regarded as one of the two great works of Indian literature, along with the Mahabharata.....The story's original version in Sanskrit is known as Valmiki Ramayana, dating to approximately the 5th to 4th century BC....The names of the characters (Rama, Sita, Daśaratha, Janaka, Vashista, Vishwamitra) are all known in late Vedic literature. " 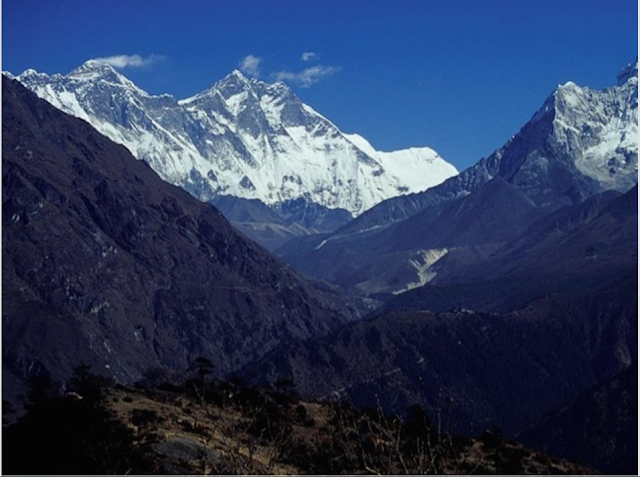 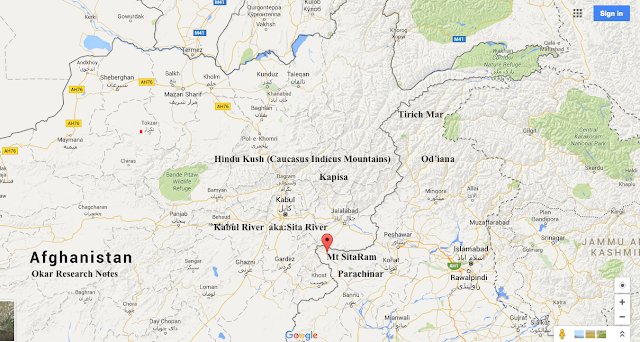 "Safēd Kōh (Persian: سفید کوه‎‎, Urdu: سفید کوہ‎, "White Mountains"; also known as Spin Ghar (Pashto: سپين غر‎, "white mountain", the Indian Caucasus as late as the 19th century, the Safīd Mountain Range and as the Morga Range), is a mountain range in eastern Afghanistan and expanding well to North-Western Pakistan.......Its highest peak, straight and rigid Mount Sita Ram (aka: Sikaram), towers above all surrounding hills to 4,761 m (15,620 ft) above mean sea level. The Kabul River cuts a narrow trough through the Safēd Kōh mountains to flow eastward into the Indus River; otherwise, the range connects directly with the Shandur Top offshoot of the Hindu Kush mountain system.....The Khyber Pass crosses a spur of the Safēd Kōh range. The closest city near the Safed Koh is Parachinar of Pakistan.....Forests of pine and deodar cedar thrived on the main range."..........http://www.eosnap.com/tag/mount-sikaram/

"The basin of the Kabul river is enclosed at the head by the Paghman range, an offshoot of Hindu Kush, which divides the Kabul valleys from the Helmand. Up the head-waters of the stream that passes Kabul, leads the chief road to Turkestan, crossing for a brief space into the Helmand basin by the easy pass of Unai (11,320 feet), and then over the Koh-I-Baba, or western extension of Hindu Kush, by the Hajjigak passes (12,190 and 12,480 feet), to Bamian.......The most conspicuous southern limit of the Kabul basin is the Safed Koh, Spin-gar of the Afghans (White Mountain," not to be confounded with the western Safed Koh already named), an alpine chain, reaching, in its highest summit, Sita Ram, to a height of 15,622 feet, and the eastern ramifications of which extend to the Indus at and below Attok. Among the spurs of this range are those formidable passes between Kabul and Jalalabad in which the disasters of 1841-42 culminated, as well as the famous Khybar passes between Jalalabad and Peshawar. This southern watershed formed by the Safed Koh is so much nearer the Kabul river than that on the north, that the tributaries from this side, though numerous, are individually insignificant."

There are 49 cosmic hymns in the Rig and the Yajur Vedas whose meanings have not been explained. But one particular hymn from Vedanga Jyotish informs us that the longest day of the year, or summer solstice, comprised 18 periods of daylight and 12 of night. Day and night are of equal length on the Equator; in the higher latitudes, summer days are longer than nights.......The latitude at which the proportion of daylight and darkness is 3:2 is 34 degrees North. It is worth noting that the cities to be found around this latitude today are Herat and Kabul in Afghanistan. In other words, the place and time of the composition of the Vedanga Jyotish is the same as that of Vedic Afghanistan and Iran. This second piece of evidence offered by Rajesh Kochhar further strengthens the perception of the location and time of the Rig Veda......In search of the rivers.......Kochhar has deconstructed the Rig Veda in search of the Saraswati and the Sarayu, the two rivers also mentioned in the Ramayana. Here too our current history has come in the way.....Kochhar believes it is the 650-km river known as the Hari-Rud in Afghanistan, whose source is in the Hindu Kush mountains. It flows past the city of Herat and then for 100 km along the Iran-Afghanistan border before disappearing in the Karakom desert of Central Asia.....http://scroll.in/article/723351/was-the-ramayana-actually-set-in-and-around-todays-afghanistan

"In other Zoroastrian Pahlavi texts the White Xyōn are named among the enemies of Wištāsp who are doomed to final destruction because of their wickedness...... they may have been the people referred to as the White Huns......for parallels from Indian litera­ture: śveta-hūṇa or sita-hūṇa = White Huns, hala-hūṇa = dark, or Red, Huns).".....http://www.iranicaonline.org/articles/chionites-lat

Sita or Seetha Rivers:
In Western Ghats of India in Karnataka state, near Hebri......
The Tarim River (Mandarin Tǎlǐmù Hé, 塔里木河; Uyghur: تارىم دەرياسى), known in Sanskrit as the Śītā is the principal river of the Xinjiang Uygur Autonomous Region in the People's Republic of China.......
Kabul River, or Kabal River (Persian: دریای کابل), is a river that rises in the Sanglakh Range in Afghanistan...."The marauder Obaidallah crossed the Sita River and made a raid on Kabul in 698 AD........"
"Tibetan texts mention that the Kingdom of Shambhala is located north of the river Sita…"

"Sita Ram is that form of the Shila where Lord Ram is present with Sita Mata. ....Ram and Sita represent an ideal pair with immense love, affection, feeling of sacrifice for each other and respect for each other existence." 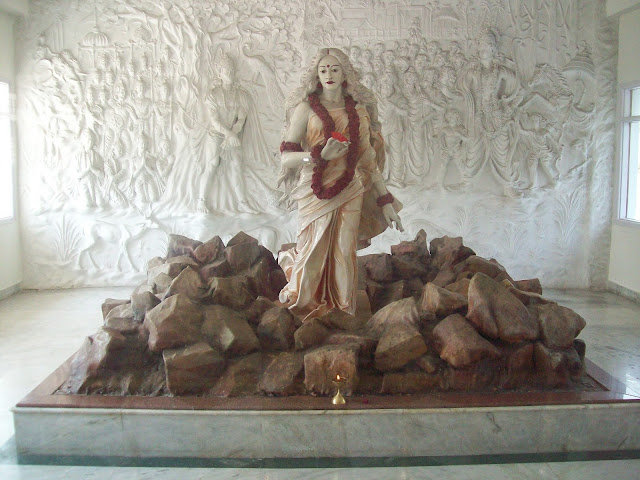 "Goddess Sita Maa is the consort of Lord Rama, the seventh avatar (incarnation) of Lord Vishnu. Sita is the one of the most popular goddesses of Hindu religion. Devi Sita is regarded as the incarnation of Goddess Lakshmi.....There are two places named identically as Sitamarhi. One is in Bihar where Sita, the wife of Lord Rama sprang to life out of an earthern pot, when Raja Janak was ploughing the field somewhere near Sitamarhi to impress upon Lord Indra for rain. It is said that Raja Janak excavated a tank at the place where Sita emerged and after her marriage set up the stone figures of Rama, Sita and Lakshman to mark the site. This place is in Bihar near Nepal Border.......The other place is one where Sita Maa goes underground after spending the life in forest in Valmiki Ashram after the Ramayana war in Uttar Pradesh ."......http://www.ghumakkar.com/sitamarhi-sita-samahit-sthal/

Hindu Kush Mountains....."Kusha or Kush (Sanskrit: कुश)......and his twin brother Lava, were the children of Lord Rama and his wife Sita, whose story is recounted in the Hindu epic Ramayana. He was the elder of the two and is said to have wheatish complexion like their mother, while Lava had black complexion like their father....Ramayana by Valmiki says Sita gave birth to both Lava and Kusha at the same time. The line of kings which ruled Kashi and the Mauryan dynasty, an empire that ruled the Indian sub-continent from 320 BC to185 BC claimed descent from Kusha. Kusha belongs to Ikshvaku clan or Suryavansh Dynasty of Kshatriyas in Vedic civilization"....https://en.wikipedia.org/wiki/Kusha_%28Ramayana%29#cite_ref-1