"The subject of the Four Transcendent Lords is described in detail in chapter 30 of the Ziji (gZi brid) with the story of the death of Prince Trishang of Tazik. The Four Lords are the principal deities in the funeral ritual for the prince....."........http://www.himalayanart.org/search/set.cfm?setID=51

"...in the text (p. 961), he tells us how to get to Stag-gzig (=Ta-zig) country. Starting from Ladakh you travel a great distance, and in the northwest is Mo-ta-na, a part of Du-ru-ka. To the south of Mo-ta-na is Thod-dkar country, and outside of (or ‘beyond’) Thod-dkar is Ta-zig or Stag-gzig country. (Note: This does seem to place Stag-gzig in the northern part of present Afghanistan and Pakistan".......https://sites.google.com/site/tibetological/-ol-mo-lung-ring#_ednref24

"...If we follow the scheme of the Eighteen Great Countries, and assume that ’Ol-mo-lung-ring is, as many later sources say, in some way identical with Stag-gzig, we see that Stag-gzig is to the west of Tibet, and is bordered by the smaller areas of Gilgit and Yavana (Bactria). This would point to an area stretching from present-day north Pakistan to Takhar (equivalent to Tibetan Tho-gar, which shouldn’t be confused with the Thod-dkar which borders China, although both names seem to come from a single ethnonym, and are in fact occasionally confused in Bon sources) in northeastern Afghanistan, and possibly including areas still further to the south."....https://sites.google.com/site/tibetological/-ol-mo-lung-ring#_ednref24

".... ’Ol-mo-lung-ring is located to the northwest of western Tibet (where Ti-tse/Ti-se is) and rather to the north of a mysterious country called Dmu (Persia, perhaps?). It is cut by both the Nine Dark Mountains (on which, more soon) and the rivers Pag-shu and Si-ti, which we might very well identify as the Oxus (Vakṣu) and Sitā 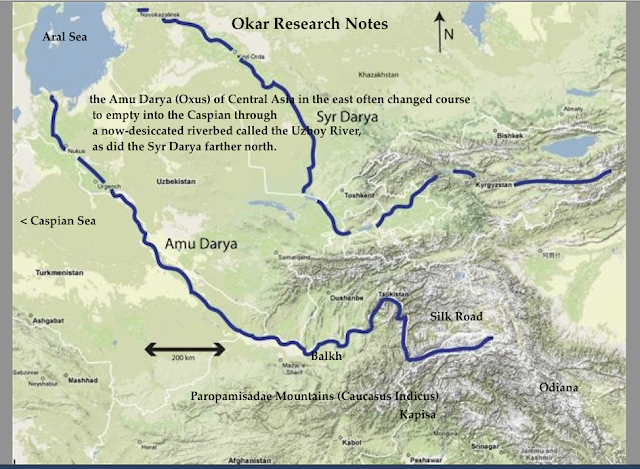 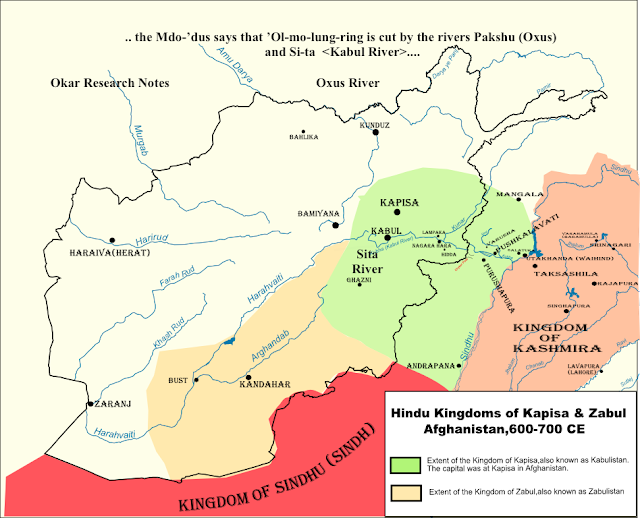 "... the teachings of Yungdrung Bon did not solely originate in Zhang-zhung, but were said to have been brought from Tazik, that is, Iranian speaking Central Asia......Shenrab Miwoche..... incarnated as a human being in the country of Olmo Lung-ring ..... in Tazik or Central Asia. In this mysterious land at the center of the world, which was in later Indo-Iranian tradition identified with Shambhala..."....Ancient Tibetan Bonpo Shamanism ....John Myrdhin Reynolds, aka Vajranatha......http://vajranatha.com/articles/traditions/bonpo.html?showall=1

" ....all the various sources we have brought forward point to a location for ’Ol-mo-lung-ring not precisely in Persia, but in the lands between northern Persia and the (changing) western borders of Tibet."..... ...https://sites.google.com/site/tibetological/-ol-mo-lung-ring#_ednref24 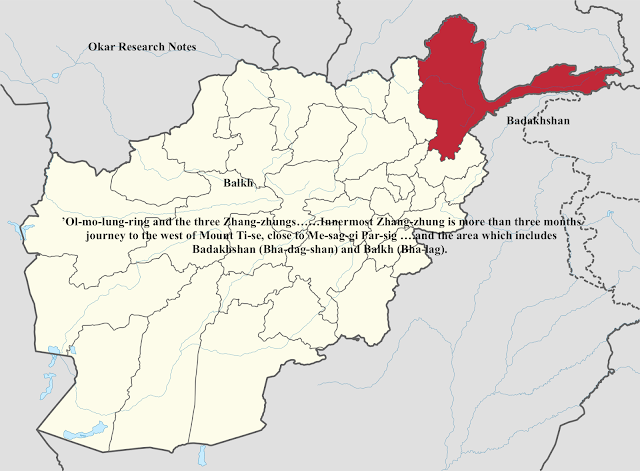 "...This Bon historical-geographical work would make a fascinating study in its own right, but here we will limit ourselves to what it has to say relevant to ’Ol-mo-lung-ring and the three Zhang-zhungs. It says (p. 945) that Innermost Zhang-zhung is more than three months journey to the west of Mount Ti-se, close to Me-sag-gi Par-sig (?some part of Persia, evidently) and the area which includes Badakhshan (Bha-dag-shan) and Balkh (Bha-lag). ".....https://sites.google.com/site/tibetological/-ol-mo-lung-ring#_ednref24 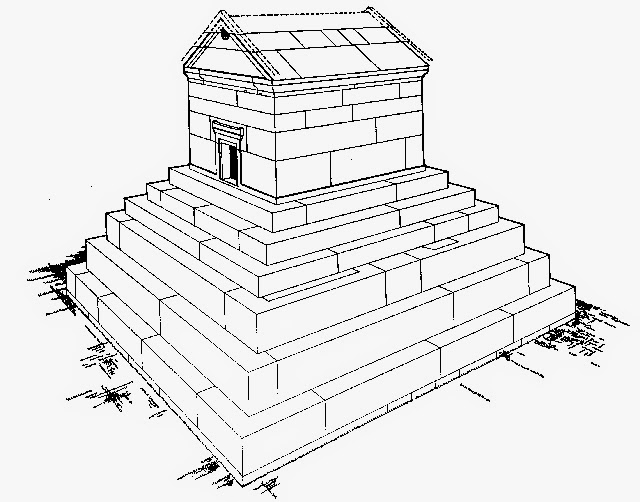 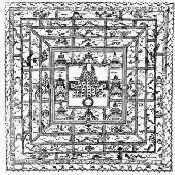 "Many modern Tibetan nationalists, both inside and outside Tibet, strongly reject, or simply ignore, the idea of Bon’s extra-Tibetan origins, since this doesn’t fit well with the uses they want to make of Bon. "....https://sites.google.com/site/tibetological/-ol-mo-lung-ring#_ednref24

"There is another earlier Chos story, starting with the history by Nyang-ral at the end of the 12th century, that at least one kind of Bon (Nyang-ral calls it ‘outbreak Bon of the sky’) had its Tibetan origins with a teacher who came from a place to the west of Tibet (a place he locates on ‘this’ side of O-rgyan, and the other side of Kashmir, thus seeming to place it in the present-day Buner valley, while other later Chos sources locate it either in Stag-gzig or in between Sog-po and Stag-gzig, making for a rather complicated discussion that will not be pursued further here) in the time of Dri-gum-btsan-po, and although quite evidently polemically motivated, a number of centuries later than the events described, and not portraying the geography in the same way as Bon sources, this sort of statement might at the very least be taken as an outside source of verification, however hostile it may be, of the nearly universal account of Bon’s extra-Tibetan origins held by Bon historians of the past. Even the nineteenth-century guide to Mt. Ti-se by the Bonpo Dkar-ru Grub-dbang, who was born (in 1801) in the vicinity of that mountain, and evinces in his book very little interest in ’Ol-mo-lung-ring, nevertheless says that Lord Shenrab came to Mt. Ti-se from ’Ol-mo-lung-ring in Stag-gzig and subsequently returned there (Norbu & Prats 1989: 42-53).".........’Ol-mo-lung-ring, the Original Holy Place.....by Dan Martin....https://sites.google.com/site/tibetological/-ol-mo-lung-ring#_ednref24

"....Buner District (Pashto: د بونیر ولسوالی‎) is a district of the Khyber Pakhtunkhwa province of Pakistan.....Buner which until 1969 was part of Swat.....It is a small mountain valley, dotted with villages and divided into four sub-divisions. The Mora Hills and the Ilam range divide it from the Swat Valley, the Sinawar range from Yusafzai, the Guru mountains from the MARDAN valley, and the Duma range from the Puran Valley.......