"There are many gods....They are always present everywhere.....we prefer to use the term Naturalism rather than Polytheism."

"The single most important element that dominates the landscape of ancient Bactria is the river Amu Darya, the ancient Oxus, and its many tributaries. Bactria without Oxus is almost unimaginable.....yet most research has been confined to the study of the "major" religions (Buddhism, Zoroastrianism and/or Islam)...... Despite that, the local Bactrian polytheistic pantheon presents an amazing richness and forms a fascinating field of study, yet acknowledged by not many modern scholars."......THE LOCAL RIVER GOD OXUS-WAKHSH IN PRE-ISLAMIC BACTRIA.....http://www.iranianstudies.com/content/local-river-god-oxus-wakhsh-pre-islamic-bactria

"It is a river deity or aquatic deity for which we know two things for certain: that in the Hellenistic period a whole temple was dedicated to this god and that much later, in the seventh and eighth century CE, local people took its worship seriously by taking oaths on its name during their legal and economic transactions.".....http://www.iranianstudies.com 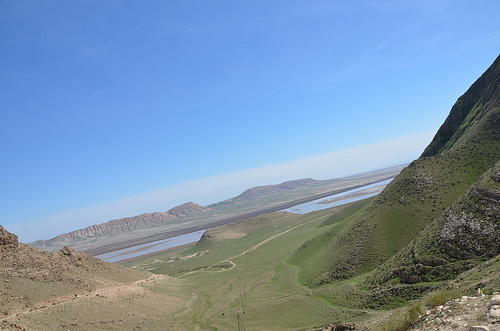 Takht-i Sangin....The ancient town of Takht-i Sangin is located near the confluence of the Vakhsh and Panj rivers, the source of the Amu Darya, in southern Tajikistan.....The Greco-Bactrian temple site of Takht-i Sangin is believed by many to be the source of the Oxus Treasure that now resides in the Victoria and Albert Museum and British Museum. Part of greater Transoxiana and built in the 3rd Century BC, the site consists of a well-fortified citadel containing the so-called "Temple of Oxus".....Holt, F.L. (1989), Alexander the Great and Bactria: The Formation of a Greek Frontier in Central Asia: 2nd Edition, Brill Archive.

"OXYARTES......Hellenized form of the Old Persian male name Vaxšuvarda (also seen spelled as Vakhshuvarda), which was derived from older Persian Vaxšuvadarva......part of the name referring to Vakhsh, the Aramaic counterpart of the Greek river god Oksos or Oxos (known as Oxus in Latin).... Oxyartes would then be a Greek transliteration of the original Aramaic name......if one looks up the Oxus river (nowadays called Amu Darya) from which the river god derived its name (or vice versa).....Vakhsh is said to be ultimately derived from Sanskrit Vaksu. A known bearer of this name was the father of Roxana, the Bactrian wife of Alexander the Great (4th century BC)."......."Kingship in Hellenistic Bactria" by Gillian Catherine Ramsey.....http://www.behindthename.com/name/oxyartes/submitted

"In modern Takht-i Sangin, on the Uzbekistan-Afghanistan borders, along the river Amu Darya (Gr. Oxus, Bact. Wakhsh), a large temple complex has been excavated by Russian archaeologists, which bears little resemblance to typical ancient Greek religious architecture. However, this building has provided us with significant evidence for the cult of the local river god Oxus through Greek inscriptions from the time of the Greco-Bactrian kingdom. A famous stone altar base with a standing Marsyas on top, fragments from a stone perirrhanterion on the temple’s entrance and a bronze caldron preserve dedicatory inscriptions mentioning god Oxus. All names of the devotees are Iranian, but the “epigraphic habit”, god Marsyas, the caldron and the perirhanterion are a clear reference to a Greek understanding of the ritual and the cult.".....https://hellenisticmonarchies2015.wordpress.com/day-2/spyridon-loumakis/

"The popularity of the local cult of Oxus can be seen in the amount of examples of Oxus-based theophoric names found in Aramaic documents from Bactria, dated from 353 to 324 BC, possibly from the archive of the satrap of Bactria, and in the epigraphic data from the Hellenistic city of Aï Khanoum in Bactria (before the mid second c. BC). In addition, we know from ancient Greek authors that Oxy-atres was the name of Darius III’s brother (Arrian, Anabasis 7.4; Strabo, Geography 12.3.10), that Oxy-dates was a high royal Persian, imprisoned by Darius III, and later appointed satrap of Media by Alexander III (Arrian, Anabasis 3.20; 4.18) and that Oxy-artes was one of the four powerful noblemen of Bactria who resisted the advance of Alexander III’s army (Arrian, Anabasis 3.28; 4.18-21; 6,.5; 7.4; 7.6; Diod. Sic., Historical Library 2.6.2)."....Spyridon Loumakis (Concordia University): “Oxus-Wakhsh: A Local River God in Hellenistic Bactria”......https://hellenisticmonarchies2015.wordpress.com

".... this unique temple, which mixes Hellenistic and local Iranian religious traditions in many levels (sacred setting, ritual, cult) was extremely significant for the eastern most border of the Hellenistic world in central Asia, based on three arguments: (a) on the temple’s variety and richness of offerings (more than eight thousand excavated objects of alabaster, clay, terra cotta, bone, ivory, semiprecious stones, glass, textiles, iron, bronze, silver and gold), (b) on its monumental proportions, which manifest the concentration of great political and economic power, and (c) on the abundance of arms dedicated to the temple, probably the biggest assemblage in the entire Central Asia, with different types of offensive and defensive armour, from Hellenistic, Middle Eastern and Sarmatian-Scythian origins.".....Spyridon Loumakis......https://hellenisticmonarchies2015.wordpress.com

"In the extremely beautiful spot where the Vakhsh and Pyanj rivers flow together and give birth to the Amu Darya lie the ruins of the Takhti Sangin temple, a Zoroastrian temple of the Achaemenid Persian period.....During the silk-road period it was a center where merchants visited by land and river. Here, it is believed, the Oxus Treasure pieces were found in 1877; beautiful objects of incredible elegance and beauty..... the Takhti Sangin temple has various legends. Signs of different religions have been found, indicating that the temple existed as a strategic point of trade between the east and west....it takes two days to explore Takhti Sangin and other small castles along Amu Darya river and Tigrovaya Balka Nature Reserve.... unfortunately, the story of the temple is different, its location right in the border with Afghanistan means that few can currently get permission to visit.."....by Bahodur Sheraliev.....

"...northeastern Bactria (that is, the Hindu Kush region) was known as Kafiristan ("Land of the Infidels" in Persian) because of the people's fierce resistance to Islam and unique polytheism (different than Hinduism).....

"The Oxus region is home to archaeological relics of grand civilisations, most notably of ancient Bactria, but also of Chorasmia, Sogdiana, Margiana, and Hyrcania. However, most of these ruined sites enjoy far less fame, and are far less well-studied, than comparable relics in other parts of the world....most of the ruins have been neglected by the modern world – largely due to the region's turbulent history..... 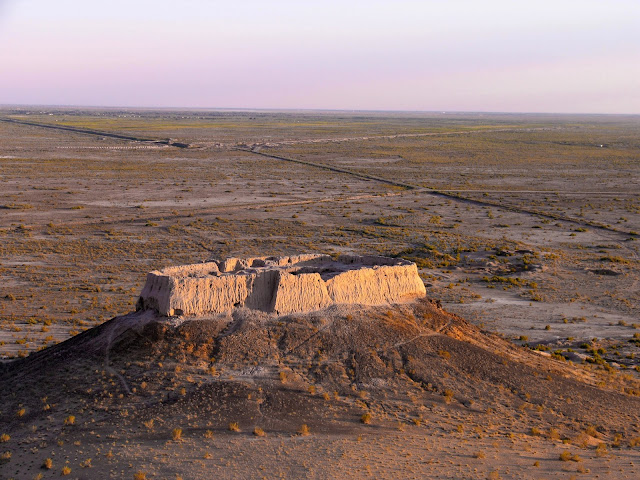 "The Oxus is the largest river (by water volume) in Central Asia. Due to various geographical factors, it's also changed its course more times (and more dramatically) than any other river in the region, and perhaps in the world.......The source of the Oxus is the Wakhan river, which begins at Baza'i Gonbad at the eastern end of Afghanistan's remote Wakhan Corridor......The Oxus proper begins where the Panj and Vakhsh rivers meet, on the Afghanistan-Tajikistan border...... the land that was the region's showpiece in the antiquity period: Bactria. The Bactrian heartland can be found south of Sogdiana, separated from it by the (relatively speaking) humble Chul'bair mountain range. Bactria occupies a prime position along the Oxus river: that is, it's the first section lying downstream of overly-rugged terrain; and it's upstream enough that it remains quite fertile to this day, although it's significantly less fertile than is was millennia ago...... surprisingly little is known about the details of ancient Bactria today. ....The capital of Bactria was the grand city of Bactra, the location of which is generally accepted to be a circular plateau of ruins touching the northern edge of the modern-day city of Balkh. These lie within the delta of the modern-day Balkh river (once known as the Bactrus river), about 70km south of where the Oxus presently flows. In antiquity, the Bactrus delta reached the Oxus and fed into it; but the modern-day Balkh delta (like so many other deltas mentioned in this article) fizzles out in the sand......Balkh is believed to have been inhabited since at least the 27th century BC.....due to decades of military conflict in the area, access continues to be highly restricted, for security reasons.".....Forgotten realms of the Oxus region...http://greenash.net.au/

"....in Upper Bactria is the archaeological site of Takhti Sangin. This ancient ruin can be found on the Tajik side of the border; and since it's located at almost the exact spot where the Panj and Vakhsh rivers meet to become the Oxus.....The principal structure at Takhti Sangin was a large Zoroastrian fire temple, which in its heyday boasted a pair of constantly-burning torches at its main entrance. Most of the remains at the site date back to the 3rd century BC, when it became an important centre in the Greco-Bactrian kingdom (and when it was partially converted into a centre of Hellenistic worship); but the original temple is at least several centuries older than this, as attested to by various Achaemenid Persian-era relics.....Takhti Sangin is also the place where the famous "Oxus treasure" was discovered in the British colonial era (most of the treasure can be found on display at the British Museum to this day)..... Takhti Sangin has been studied only sporadically by modern archaeologists.....Forgotten realms of the Oxus region...http://greenash.net.au/

"In Dancing With the Sacred, Karl Peters proposes that the sacred is the dance of life (a form of god). He develops an understandable naturalistic theism in which the Universe is not governed by a personal supernatural God. This determination is not atheistic, for the concept of the divine is preserved in a system of non-personal processes within the natural world. Nature produces variations that generate new aspects of existence that are creative but without design.".....Dancing With the Sacred: Evolution, Ecology, and God - Trinity Press International, 2002,

"The Oxus River, identified as the world river that descends from the mythological High Hara.....Hara Berezaiti, "High Hara", the mythical mountain that is the origin of the *Harahvatī river.....Harahvati Aredvi Sura Anahita, the source of all waters in the world that descends from the mythical Mount Hara.....Another source of spiritual home that made Bactria sacred was a great temple of the ancient Iranian goddess, Anahit (in Pahlavi or Middle-Persian) and Anahita (Ânâhitâ) in the Avesta hymns. The temple was so rich that often it attracted the needy Syrian kings who sat out to plunder it....Anahita is a water goddess whose origins go back to Central Asia from where her worship spread through Persia all the way to the Middle-East....According to the Avesta, the water goddess Anahita was the mother of the god of Victory known as Mithra...The female protectress of Balkh, Anahita goddess of the Oxus, in Alexander’s day. Anahita’s magnificent gilded statue had been gifted by one of Darius’s predecessors, Artaxerxes II. Thousands had come to licentious rites in the precinct of the ‘High girdled one clad in a mantle of gold, on her head a golden crown with rays of light and a hundred stars clad in a robe of over thirty otter skins of shining fur’….. "......http://www.iranchamber.com/geography/articles/balkh.php