"Xuanzang reports that at the time of his visit to Balkh in 630 AD there were about a hundred viharas and 30,000 monks, a large number of stupas and other religious monuments, and that Buddhism was flourishing in Bactria"

"Faxian...Fa-Hien and Fa-hsien.... (337 – c. 422 AD) ...... a Chinese Buddhist monk who travelled by foot from China to India, visiting many sacred Buddhist sites in what are now Xinjiang, Pakistan, India, Nepal, Bangladesh and Sri Lanka between 399-412 to acquire Buddhist texts. His journey is described in his important travelogue, A Record of Buddhist Kingdoms, Being an Account by the Chinese Monk Fa-Xian of his Travels in India and Ceylon in Search of the Buddhist Books of Discipline.....Faxian's visit occurred during the reign of Chandragupta II, one of the most powerful emperors of the Gupta empire.... Faxian (Fa-hsien) reached the banks of the Indus river from Kashgar traveling through the province of Gandahara, Peshawar, Banu and saw the temples of present day Jalalabad. He saw Suhuto (Swat), Gandahara, Chuhashilo (Taxila), Folusha (Peshawar).......He describes the famous monasteries and Buddhist centers of these places and from Banu travels to the banks of the Indus river."

"Bodhidharma was a Buddhist monk who lived during the 5th or 6th c. AD..... He is traditionally credited as the transmitter of Chan Buddhism to China, and regarded as its first Chinese patriarch....Chinese sources vary on their account of Bodhidharma's origins, giving either an origin from India or Central Asia......He is referred as "The Blue-Eyed Barbarian"...a Persian Central Asian. .....One early account claiming that he arrived during the Liu Song dynasty (420–479 AD) and later accounts dating his arrival to the Liang dynasty (502–557). Bodhidharma was primarily active in the territory of the Northern Wei (386–534). Modern scholarship dates him to about the early 5th century.....Bodhidharma's teachings and practice centered on meditation and the Laṅkāvatāra Sūtra."

"Song Yun of Dunhuang (518 AD)......went with a monk Huisheng on a mission sent by the Empress Dowager to obtain Buddhist scriptures in India in 518 A.D. He traveled through the Taklamakan desert via the southern route passing Shanshan, Charkhlik, Khutan, then further west into the Hindu Kush, Kabul, and Peshawar. The most interesting account is his visit is to the Hepthalites (the White Hun) kingdom, which centered in eastern Afghanistan and controlled much of Central Asia during the 5th and 6th centuries. As a result of this journey Song Yun managed to collect 170 books dealing with the Greater Vehicle (Mahayana) and took them to China.....Song Yun followed the route taken by Faxien from Khutan to the eastern parts of Afghanistan. At this time the Hepthalites kings ruled over the land. Gulas, the Hepthalite king, (most likely Mehrakula), ruled harshly over the land with a force of 1000 warring elephants and cavalry.... the Hepthalite administrators appointed a satrap to rule over Gandahara, whose name was Lai-Lih or he was a person who belonged to this lineage. When the Hepthalites conquered Gandahara they appointed Lai-Lih as its king. During the time of the visit of Song Yun (520 A.D.) the second king of this family was ruling over the region.....Song Yun provides accurate accounts of the people, their clothing, the empresses and court procedures and traditions of the people and he states the Hepthalites did not recognize the Buddhist religion and they preached pseudo gods, and killed animals for their meat."..... Chinese Travelers in Afghanistan by Abdul Hai Habibi ....http://www.alamahabibi.com/English%20Articles/E-Chinese_Travelers.htm

Xuanzang (玄奘....Hsüan-tsang)...(c. 602 – 664 AD)..... a Chinese Buddhist monk, scholar, traveller, and translator who described the interaction between China and India in the early Tang dynasty. ...He became famous for his seventeen-year overland journey to India, which is recorded in detail in the classic Chinese text Great Tang Records on the Western Regions, which in turn provided the inspiration for the novel Journey to the West written by Wu Cheng'en during the Ming dynasty, around nine centuries after Xuanzang's death.... the third Chinese traveler who has written his observations about Afghanistan....While Hsuan Tsang was traveling though Afghanistan the effects of Islamic conquests had not reached Afghanistan and Buddhism prevailed over all of the northern and eastern provinces of the country. Monasteries existed in all the major centers and thousands of monks were engaged in the learning of this religion..". 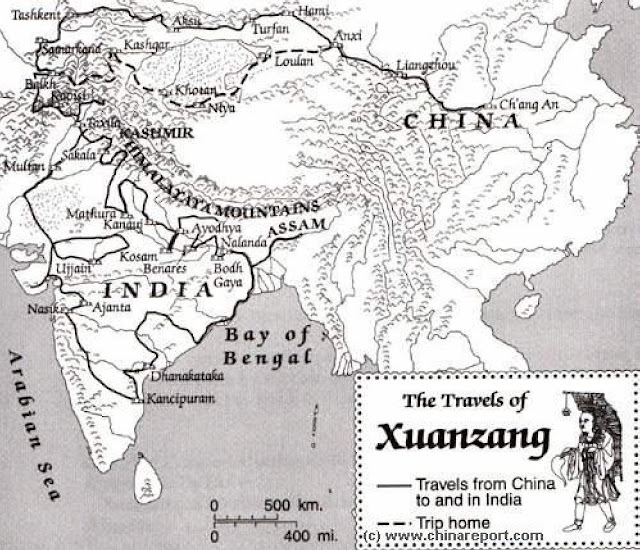 Yijing (義淨....Yìjìng.....I Ching).... (635–713 AD)...... was a Tang Chinese Buddhist monk originally named Zhang Wenming.... The written records of his 25-year travels provided information about the kingdoms lying on the route between China and the Nālandā Buddhist university in India. He was also responsible for the translation of a large number of Buddhist texts from Sanskrit into Chinese.... He walked to Nālandā, a large Buddhist monastery in ancient Magadha (modern-day Bihar), India, where he stayed for 11 years."

Samarkand.....
Xuanzang.....630 AD...."In Samarkand, which was under Persian influence, the party came across some abandoned Buddhist temples and Xuanzang impressed the local king with his preaching. Setting out again to the south, Xuanzang crossed a spur of the Pamirs and passed through the famous Iron Gates. Continuing southward, he reached the Amu Darya and Termez, where he encountered a community of more than a thousand Buddhist monks."


Kunduz.....
"Further east, in 630 AD.....Xuanzang passed through Kunduz, where he stayed for some time to witness the funeral rites of Prince Tardu, who had been poisoned. Here he met the monk Dharmasimha....In the third century AD, Kunduz had become a great center for Buddhist learning....Hsuan Tsang went from Takharistan to Holu (Kunduz) and met the elder son of the Hepthanlite chief. This prince was married to the sister of Kao Chang. Hsuan Tsang was in possession of letters of references from that prince. He considers 27 provinces south of the Oxus river to be the domain of the Hepthalite chiefs. Different chiefs ruled under the Huns. Their language was slightly different from that of other countries and its alphabet contained 25 letters which was written horizontally from left to right."

Balkh......
"Xuanzang, on the advice of the late Prince Tardu made the trip westward to Balkh, Afghanistan, to see the Buddhist sites and relics, especially the Nava Vihara, which he described as the westernmost vihara in the world. Here Xuanzang also found over 3,000 non-Mahayana monks, including Prajnakara (般若羯羅 or 慧性), a monk with whom Xuanzang studied early Buddhist scriptures."


"Nava Vihāra also housed a tooth relic of Gautama Buddha, making it one of the main centers of Buddhist pilgrimage along the Silk Road from China to India.....In the Great Tang Records on the Western Regions, Xuanzang reports that at the time of his visit to Balkh in 630 AD there were about a hundred viharas and 30,000 monks, a large number of stupas and other religious monuments, and that Buddhism was flourishing in the Bactrian portion of the Western Turkic Khaganate. He also described it as having strong links with the Kingdom of Khotan in the Tarim Basin. The temple was led by Kashmiris called Pramukha, Sanskrit for "leader, administrator", who, under the Arabized name of Barmak, came to be known as the Barmakids)."....https://en.wikipedia.org/wiki/Nava_Vihara

"The Han Chinese pilgrim Yijing visited Nava Vihāra in the 680 AD and reported it flourishing as a Sarvāstivādin center of study."......https://en.wikipedia.org/wiki/Nava_Vihara

"Balkh...Balkh (Persian/Pashto: بلخ Balkh; Bactrian: βαχλο, Pakhlo) was an ancient city and centre of Buddhism, Sufism and Zoroastrianism ......it is considered one of the oldest cities in the world....This was the place where Zoroaster had first preached and it was the place where he died...... By 400 AD, Hinayana Buddhism was widely practiced in Balkh. According to oral traditions, Buddhism had been originally brought into the region by the monk Bhalika, a disciple of the Buddha. Trapusa and Bhalika had offered the Buddha his first meal after enlightenment and had become his first disciples. When Xuanzang visited Balkh in 630 it was a flourishing center of Hinayana Buddhism. At this time there were about a hundred Buddhist convents in the area, as well as 30,000 monks and a number of religious monuments... In the temple of Nawasingara (Nawbahar) of Balkh, there was a vase, tooth, broom and statue of Buddha which were all adorned with jewels. This temple contained precious ornaments and the son of Shahu Khan (Hepthalite) attacked Balkh to loot the precious bounty.."

Bamiyan....
"Prajñakara then accompanied Xuanzang southward to Bamyan, Afghanistan (“the place of the shining light”) where Xuanzang met the king. They visited a number of monasteries and the two large Bamyan Buddhas carved out of the rockface. This area marked the western-most point of Buddhist expansion., Xuanzang saw tens of non-Mahayana monasteries....From the provinces south of the Oxus, Hsuan Tsang arrived at Fan-yen-na (Bamian) where a separate king ruled. His kingdom from east to west extended 2000 li (600 miles) and from north to south it was 100 miles wide. He describes the two great statues of Buddha and a sleeping Buddha and other sacred relics. In ten monasteries about 1000 monks lived. They were all senior monks and were followers of the Lesser Vehicle (Theravada). "


Kapisa....
"Xuanzang then resumed this travel eastward, crossing the Shibar Pass and descending to the regional capital of Kapisi (about 60 kilometres (37 mi) north of modern Kabul, Afghanistan), which sported over 100 monasteries and 6000 monks, mostly Mahayana. This was part of the fabled old land of Gandhara. Xuanzang took part in a religious debate here, and demonstrated his knowledge of many Buddhist schools. Here he also met the first Jains and Hindu of his journey....From Bamian he went to Kia-pi-shi (Kapisa) which was 1300 miles in size and its people wore woolen clothes. Its king was from the Kashttriya people and he was considered a wise and brave man who conquered the adjacent lands and ruled over 10 other provinces too. He was a faithful follower of Buddism and every year erected a 17 feet tall silver statue of Buddha and held the religious conference of Moksha-maha-prishad. In his country there were about 100 temples with 6000 disciples who were followers of the Lesser Vehicle. Beside this followers of other faiths also had 1000 temples in the land. According to Hui Li, the emperor of Kapisa accompanied Hsuan Tsang a distance of three miles as he left the place."


Taxila....
"Xuanzang travelled into India where he found that Buddhism was in decline in many areas. He finally arrived at Taxila (呾叉始羅), a Mahayana Buddhist kingdom, where he found 100 monasteries with 5,000 Buddhist monks. Taxila was a major center of learning and it was here that the Mahayana branch of Buddhism had developed.......Xuanzangthen travelled to Adinapur (later named Jalalabad) and Laghman, where he considered himself to have reached India. The year was 630 AD.... As explained by the traveler Lan Po (Laghman), Na-ki-loho (Nangarhar), and Kien-to-lo (Gandahara) and the lands from Peshawar to the banks of the Indus river were under the domain of the Kapisa emperor and earlier Ta-cha-shi-lo (Taxila) was also associated with Kapisa but later it became a part of Kia-shi-mo-lo (Kashmir)."

Peshawar...
"Xuanzang left Adinapur, which had few Buddhist monks, but many stupas and monasteries. His travels included, passing through Hunza and the Khyber Pass to the east, reaching the former capital of Gandhara, Purushapura (Peshawar), on the other side. Peshawar was nothing compared to its former glory, and Buddhism was declining in the region. Xuanzang visited a number of stupas around Peshawar, notably the Kanishka Stupa."
"Song Yun visited Peshawar and Nangarhar also and he provides interesting accounts of the monasteries of the land. "

Swat Valley.....
"Xuanzang left Peshawar and travelled northeast to the Swat Valley.....Reaching Oḍḍiyāna, he found 1,400-year-old monasteries, that had previously supported 18,000 monks. The remnant monks were of the Mahayana school."

I-Tsing, Chinese Monks in India, Biography of Eminent Monks Who Went to the Western World in Search of the Law During the Great tang Dynasty, Translated by Latika Lahiri, Delhi, etc.: Motilal Banarsidass, 1986

Faxian (1886). A Record of Buddhistic Kingdoms; being an account by the Chinese monk Fa-Hien of his travels in India and Ceylon, A.D. 399-414, in search of the Buddhist books of discipline. James Legge (trans.). The Clarendon Press, Oxford.