Dilbarjin: (2500 BC) A large urban site surrounded by city walls....dominated by a fortified enclosure and citadel (Kala) in the center, and has a vast unfortified urban area to the east and south of the city walls. 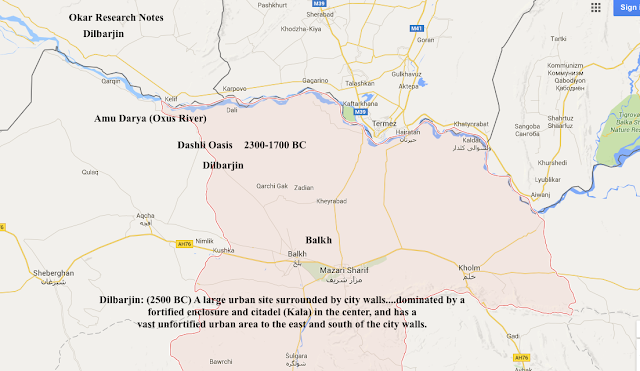 "Dilbarjin (Delbarjin) is the modern name for the remains of an ancient town in modern (northern) Afghanistan. The town was perhaps founded in the time of the Achaemenid Empire. Under the Kushan Empire it became a major local centre. After the Indo-Sassanids the town was abandoned.......The town proper was about 390 x 390 m big. Dilbarjin had a city wall built under the Kushan rule. In the middle of the town there was a round citadel, built at about the same time. In the North-East corner of the town was excavated a temple complex. Here were found many wall paintings, some in a purely Hellenistic style. Originally the temple was perhaps dedicated to the Dioscuri. Outside the city walls there were still substantial buildings. Finds include inscriptions in Bactrian, most of them too destroyed to provide any historical information. There were fragments of sculpture and many coins.".......Warwick Ball: Archaeological Gazetteer of Afghanistan : Catalogue des sites archéologiques d'Afghanistan, Paris 1982, p. 91-92

"DELBARJĪN, urban site 40 km northwest of Balḵ, on the northern limit of an oasis irrigated by the Balḵāb, near a defensive wall built during the Greek period (ca 329-130 B.C.) to protect the oasis. It was probably founded in the 5th century B.C. and flourished up to about the 6th century AD...... Study of the fortifications excavated by a Soviet-Afghan mission (c. 1969-77) suggests that the earliest stage of the citadel may date from the Achaemenid period, as the closest parallels to the construction methods and ceramic finds are of that period (Dolgorukov)...... It was, however, only in the final phase of Greek hegemony (ca. 150 B.C.), when the city may have been known as Eucratideia (Strabo, 11.11.2; Ptolemy, 6.11.8), or at the beginning of the Kushan period (ca. the beginning of the common era) that the site assumed its final configuration: a city protected by a quadrangular rampart (383-93 m2), with a circular citadel in the center. The northeast corner of the walled enclosure was occupied by a temple precinct (Figure 11/I, II), and suburbs of considerable size lay south and east of the city (Dolgorukov; Puga-chenkova, 1984). The earliest city wall consisted of a rather thin curtain of paḵsa (tamped earth mixed with water) and unbaked brick, built on a glacis of paḵsa and pierced with arrow slits, with hollow quadrangular towers at intervals. At the beginning of the Kushan period a second wall, also with towers, was constructed outside the original rampart, forming an interior gallery typical of Central Asian fortifications."..... 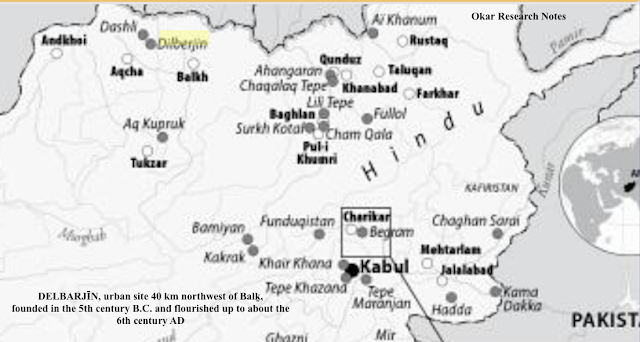 The Dioscuri at Dilberjin....."The present article deals with a wall painting representing the Dioscuri, which was found in the main temple of Dilberjin (Southern Bactria.... near Balkh). .....On the grounds of a comparison with the Graeco-Roman iconographic repertory of the Divine Twins (a particular attention being paid to compositional schemata) there are reasons to reject the chronology (the 2nd century BC) proposed by I.T. Kruglikova, the 2nd (or 3rd) century AD seeming a more reasonable date for its execution. As to the function of the Twins, they are hardly to be thought of as the main object of the cult, whereas a number of clues suggest that they might have figured as assistants or guardians of a major, possibly female, deity. This is a pattern widespread in the eastern provinces of the Roman Empire (the "Dioscuri with a Goddess"), but rooted in the local religious background as well (the Indo-Iranian Twins often associated with a female deity). A painting representing the Brahmanic couple Siva-Pârvatî, found in the same temple but pertaining to a later phase, is also taken into consideration as a further possible clue to a female cult. "....Lo Muzio, C, “The Dioscuri at Dilberjin (Northern Afghanistan): Reviewing their Chronology and Significance“, Studia Iranica, n°28-1 (1999), p. 41-71......https://frombactriatotaxila.wordpress.com/2014/03/23/the-dioscuri-at-dilberjin-northern-afghanistan-reviewing-their-chronology-and-significance/

"In Greek and Roman mythology, Castor and Pollux were twin brothers, together known as the Dioskouri. Their mother was Leda, but Castor was the mortal son of Tyndareus, the king of Sparta, and Pollux the divine son of Zeus, who seduced Leda in the guise of a swan. Though accounts of their birth are varied, they are sometimes said to have been born from an egg, along with their twin sisters and half-sisters Helen of Troy and Clytemnestra.......In Latin the twins are also known as the Gemini or Castores..... When Castor was killed, Pollux asked Zeus to let him share his own immortality with his twin to keep them together, and they were transformed into the constellation Gemini. The pair were regarded as the patrons of sailors, to whom they appeared as St. Elmo's fire, and were also associated with horsemanship.......They are sometimes called the Tyndaridae or Tyndarids.....The Dioscuri were regarded as helpers of humankind....

"We know some wall paintings from the early medieval period, which in the opinion of Gulyamov reached their highest degree of development in the 6th – 8th centuries AD as far as mural size, wealth of scenes, realistic and rich colors of images are concerned......Such paintings were discovered in Dilberjin (near Balkh), Balalyk-tepe , Adzhina-tepe (a Buddhist monastery of the 7th century AD, 12.5 kilometers east of Kurgan-Tube) , Kafyr-qala (Kurgan-Tube district in Tajikistan), Kalai Kafirnigan (80 km to the south-west of Dushanbe) , Kalai Shodmon and several others. The subjects of the images are essentially religious in nature, excluding the image of Balalyk-tepe, where there are secular topics. Art historians have identified a number of painter’s schools for the period. The Tokharistan school was represented by Balalyk-tepe, Adzhina-tepe, Kafyr-qala; the northern Tokharistan school in the Buddhist Temples of Kuva and in Semirechye; the School of the “western edge” with monuments in Sogd, Khorezm...."....http://www.diss.fu-berlin.de/diss/servlets/MCRFileNodeServlet/FUDISS_derivate_000000007165/01_Text.pdf

"In the late 60’s - mid 70’s of the 4th century AD.... Shapur II twice fought with the “Kushans”, who had their capital in Balkh. We know the events form these wars from the work “History of Armenia” by the Armenian historian Fawstos Buzand (end of the 4th - beginning of the 5th c. AD). The first war was begun by the “King of Kushans”..... Shapur II personally led the Sasanian army, but it did not help the Persians: “…the K’ušan army defeated the Persian forces exceedingly. It killed many of them, took many prisoners, and drove part of them into flight”......The war of Shapur II in the east is dated by the last years life of the Armenian king Arsak, captured by the Persian shahinshah in AD 367......".......http://www.diss.fu-berlin.de/diss/servlets/MCRFileNodeServlet/FUDISS_derivate_000000007165/01_Text.pdf

"Among the objects found over more than a century and a half in the territories that today correspond to the Central Asian republics of the former Soviet Union and with Afghanistan and Pakistan only few can be attributed to a purely Hellenistic archeological context. The main examples are the sanctuary of the god Oxus at Taḵt-e Sangin and the remnants of the capital of eastern Bactria, namely Āy Ḵānom/Aï Khanum (q.v.) in northern Afghanistan. At Āy Ḵānom, Macedonian political power was upheld from the beginning of the Seleucid period to the disappearance of the city around 145 B.C. under the attacks of the Saka nomads from north, followed by that of Yüeh-chih (Yuezhi). ".....http://www.iranicaonline.org/articles/greece-viii

"....Supporting the early date of Buddhism in Bactria is a ceramic reliquary from the Kunduz area; it carries a kharoṣṭhī inscription which says that there was a Buddhist vihāra in the vicinity and that the teaching of the Dharmaguptaka sect was widespread there. The inscription is dated to the 1st-2nd centuries AD (Fussman, 1974). A “Buddhist platform” at Sorḵ Kotal, dated, together with the statues, to the 2nd-3rd century AD, is an outstanding monument (Schlumberger, Le Berre, and Fussman, 1983, pp. 75-81). The foundation of a Buddhist monastery at Kunduz can be probably dated to the end of the Kushan period (Hackin, 1959, pp. 19-22). Additional Buddhist temples are found in Dilberjin, Haibak, and other places.......Systematic archeological research in northern Bactria (that is, north of the Amu Darya, in the south of modern Uzbekistan and Tajikistan) has revealed numerous Buddhist monuments, mainly concentrated at Termez."......http://www.iranicaonline.org/articles/buddhism-iv 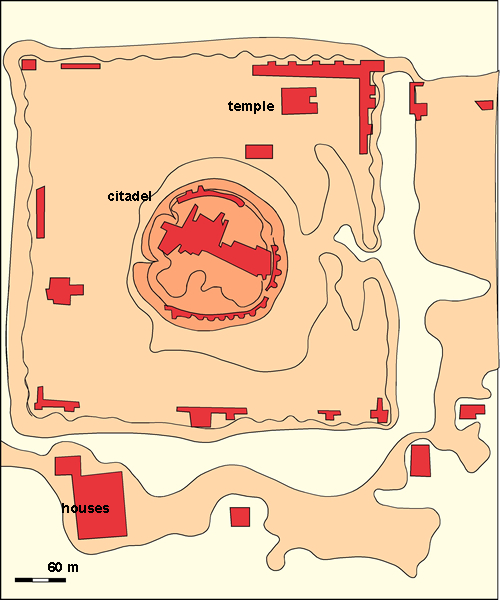 "Dilbarjin......Variant Name: Dalbarjin.......Jauzjan Province. 40 kilometers northwest of Balkh and 20 kilometers northeast of Aqcha.
Dates: Achaemenid, 6th-4th century BC
Kushan, 1st-3rd century AD
Kushano-Sassanian, 1st half of the 5th century
A large urban site surrounded by city walls re-inforced with rectangular salients. It is dominated by a fortified enclosure and citadel in the center, and has a vast unfortified urban area to the east and south of the city walls. Mounds to the southeast and southwest mark two probably monumental buildings. There is also a temple, of two main periods of construction,, that contained many frescos of the Bamiyan style, a Shiva-Parvati fresco with inscription, a marble Bactrian inscription, many sculptural fragments and many coins. Local pottery production is evident from kilns producing many wasters.
Source: Warwick Ball, Archaeological Gazetteer of Afghanistan, 1982, n. 265, 295

"Eucratideia was an ancient town in Bactria mentioned by a few ancient writers. It was most likely a foundation of Eucratides I who is the more important ruler of the Greco-Bactrian Kingdom with the name Eucratides. Not much is known about this city and it might be just a renaming of an already existing town rather than a new foundation. Renaming of cities was a common practise in the ancient world......The location of Eucratideia is disputed. Some proposed locations are:
Dilbarjin
Ai-Khanoum...at the confluence of the Oxus river (today's Amu Darya) and the Kokcha river
Qarshi; the 1923 work "The Encyclopaedia Metropolitana: Or Universal Dictionary of Knowledge" states: "Eucratidia, named from its ruler, (Strabo, xi. p. 516.) was, according to Ptolemy, 2° North and 1° West of Bactra." As these coordinates are relative to, and close to, Bactra, it is reasonable to disregard the imprecision in Ptolemy's coordinates and accept them without adjustment. If the coordinates for Bactra are taken to be 36°45′N 66°55′E, then the coordinates 38°45′N 65°55′E can be seen to be close to the modern day city of Qarshi.