"During the third turning of the wheel, the Buddha is said to have taught the gser 'od dam pa'i mdo (Supreme Golden Rays Sutra)...The Golden Light Sutra or Suvarṇaprabhāsa Sūtra (Sanskrit: सुवर्णप्रभासोत्तमसूत्रेन्द्रराज, IAST: Suvarṇaprabhāsottamasūtrendrarājaḥ), also known by the Old Uygur title Altun Yaruq, is a Buddhist text of the Mahayana branch of Buddhism. In Sanskrit, the full title is The Sovereign King of Sutras, the Sublime Golden Light." 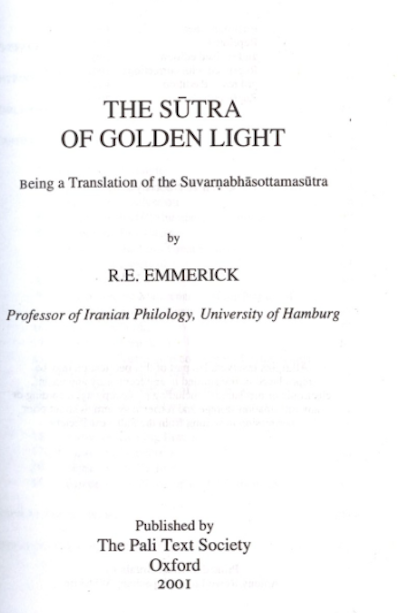 "The sutra was originally written in Sanskrit and was translated several times into Chinese ....and later translated into Tibetan and other languages.....The name of the sutra derives from the chapter called "The Confession of the Golden Drum", where the bodhisattva Ruchiraketu dreams of a great drum that radiates a sublime golden light, symbolizing the dharma or teachings of Gautama Buddha....its fundamental message, which teaches that the Four Heavenly Kings protect the ruler who governs his country in the proper manner.....the sutra also expounds the vows of the goddesses Sarasvatī (Lakṣmī ) and Dṛḍhā (the earth goddess Sthāvarā or Dṛḍhā) to protect any bhikṣu who will uphold and teach the sutra...."

"Three Turnings of the Wheel of Dharma (Skt. tridharmacakra; Tib. chö khor rimpa sum; Wyl. chos 'khor rim pa gsum) — the three major series of teachings given by the Buddha, according to the Indo-Tibetan Buddhist tradition. To 'turn the wheel of Dharma' means to teach the Dharma.:
The first turning took place in the Deer Park at Sarnath, Varanasi, where Buddha taught the Four Noble Truths.
The intermediate turning on the absence of characteristics took place on Vulture's Peak Mountain near Rajagriha.
The final turning on the complete revelation took place in Vaishali and other places and included the sutras that explain the three natures, such as the Lankavatara Sutra.

"The holy Sutra of Golden Light is the king of the sutras. It is extremely powerful and fulfills all one's wishes, as well as bringing peace and happiness for all sentient beings, up to enlightenment. It is also extremely powerful for world peace, for your own protection, and for the protection of the country and the world. Also, it has great healing power for people in the country. Anyone can read this text, Buddhists and non-Buddhists, who desire world peace. This also protects individuals and the country from what are labeled natural disasters of the wind element, fire element, earth element, and water element, such as earthquakes, floods, cyclones, fires, tornadoes, etc. They are not natural because they come from causes and conditions that make dangers happen. They come from people’s past inner negative thoughts and actions, and from external conditions. The benefits of reading this sutra are immeasurable. Reciting just a few lines of the Sutra of Golden Light creates more merit than making immeasurable offerings to the Buddha. Reciting this Sutra directs one's life towards enlightenment. There is so much merit. One's life becomes so easy—whatever one wishes for one receives. There is unbelievable purification. One liberates numberless sentient beings from the oceans of samsaric suffering and brings them to enlightenment.".....http://www.lamayeshe.com/index.php?sect=article&id=328&chid=1511

"Sutra of Golden Light (Suvarna-prabhasa-uttamaraja) was popular in China since the 6th century. It includes the philosophy of Buddha’s nature, the methods of confession and the benefits of reciting/spreading this sutra. One of the benefits is that the country would gain protection from the Four Heavenly Kings. This belief caused people to increase their faiths in the Heavenly Kings in Central Asia, especially the Khotanese, before they converted to Islam. The philosophical part of this sutra later merged with the Lotus Sutra and the confession ceremony is a monastic practice, therefore it is not as well known as the other sutras.".....The Religions in Dunhuang....http://public.dha.ac.cn/content.aspx?id=241808307552 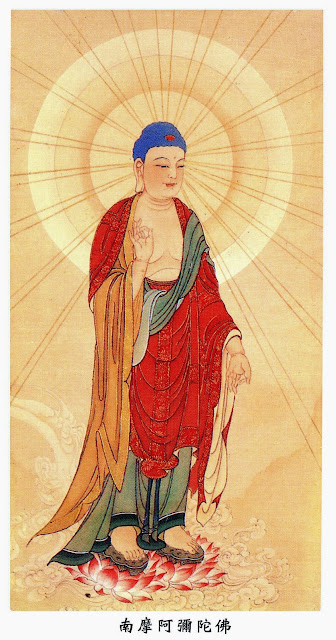 "....among the late Mahayana sutras is the Sutra of Golden Light......... It appeared in the language which western scholars generally call Buddhist Hybrid Sanskrit. How long the Sutra of Golden Light existed as an oral tradition before being written down we've no means of knowing, but in spirit at least it goes back to the time of the Buddha, to the historical Buddha. Now the sutra, the Sutra of Golden Light, did not appear all at once. It did not appear fully formed, complete. When we say that it appeared during the period 5th to the 8th century AD we don't mean that it appeared at some particular point within that period. We mean that it took the whole of that period to emerge, in other words a period of three hundred years. It took three hundred years to emerge gradually as a literary document. And this is not at all unusual..... From the first century BC to the 10th century AD, during all that period, that period of a thousand years, oral traditions were being committed to writing as scriptures. And broadly speaking the more exoteric teachings were committed to writing first, and the more esoteric remained oral traditions for longer and were committed to writing later......with the Sutra of Golden Light. It was written down in installments over that three hundred year period...... in the case of the Sutra of Golden Light, the most important part of the whole sutra, which as I've said is the confession, is not spoken by the Buddha at all. So this is a strange situation. The central part of the whole sutra - and a sutra is supposed to be a discourse by the Buddha - is not spoken by the Buddha at all. It's not even spoken by a Bodhisattva. So who is it spoken by, what is it spoken by? Well, it's spoken by a drum, it's spoken by a golden drum. And not only that. It's spoken in somebody's dream......the existing text of the sutra is divided into nineteen chapters.....In chapter three the same Bodhisattva has a dream. And in this dream he sees a Brahmin beating a drum, a golden drum, and the drum sends forth a series of beautiful verses of confession. It's these verses which are of course the nucleus of the whole sutra......in chapter ten, three goddesses come forward and they all make similar promises to protect the sutra. And these three goddesses are Sarasvati, the goddess of learning, Sri, the goddess of wealth, and Drdha, the earth goddess..."...The Growth of a Mahayana Sutra......by Sangharakshita 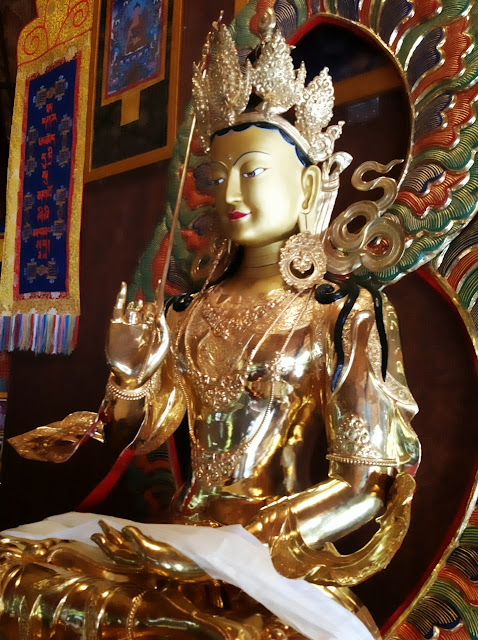 ".... the Lotus Sutra was neither the only text nor the only cult represented in sutra burials. as the final age was understood to portend political as well a religious troubles, the Lotus Sutra was also often joined by two additional scriptures held to protect the state, the Golden Light Sutra (Japanese Konkōmyō kyō) and the Benevolent Kings Sutra (Japanese Ninnō hannya haramitsu kyō). The other scriptures most commonly buried, and usually accompanying the Lotus Sutra, were the three sutras dedicated to the Buddha amida – the Larger Pure Land Sutra (Japanese Muryōju kyō), the Smaller Pure Land Sutra (Japanese Amida kyō), and the Sutra of Meditation on Amida Buddha (Japanese Kanmuryōju kyō) – and the three sutras dedicated to the future Buddha Maitreya, known in Japanese as Miroku, – the Sutra on Maitreya Achieving Buddhahood (Japanese Miroku jōbutsu kyō), the Sutra on Maitreya’s Rebirth Below [on Earth] (Japanese Miroku geshō kyō) and the Sutra on Maitreya’s Rebirth Above in Tusita (Japanese Miroku joshō tosotsu kyō). ".....The Death of the Dharma: Buddhist Sutra Burials in early Medieval Japan by D. Max Moerman

"....from the traditional Theravadin point of view, all the Mahayana Sutras are inauthentic in the sense that they were not spoken by the Buddha. Historically, Theravada has tended to take a dim view of Mahayana, regarding it as a mere degeneration of the pure teachings......That the Lotus Sutra and other Mahayana Sutras were not spoken by the Buddha is unanimously supported by modern scholarship. I don’t know of a single academic in the last 150 years who has argued otherwise.... the Lotus Sutra was composed over a period of time, or in a number of stages. The oldest sources probably stem from a little before the common era, and it was finalized around 200 AD. This makes it one of the earliest Mahayana Sutras (and it is even argued that the earliest form of the sutra may not have even been Mahayana)....But I suspect, given the visionary nature of many Mahayanist texts, that they often stemmed from meditation experiences; visions of the Buddha, memories of ‘teachings’ received while in samadhi. "....https://sujato.wordpress.com/2011/10/18/is-the-lotus-sutra-authentic/