Nuristān & Uddiyana: Land of the Enlightened 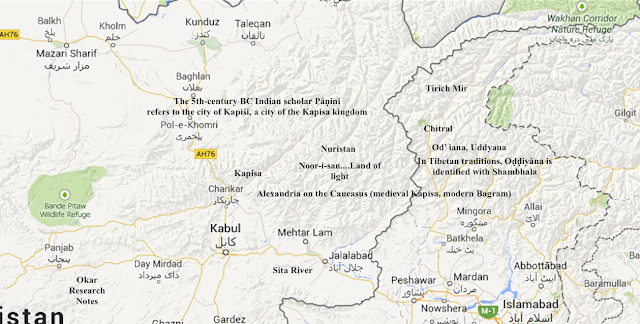 "The Nuristan province territory fell to the Maurya Empire, which was led by Chandragupta Maurya. The Mauryas introduced Hinduism and Buddhism to region, and were planning to capture more territory of Central Asia until they faced local Greco-Bactrian forces. Seleucus is said to have reach a peace treaty with Chandragupta by given control of the territory south of the Hindu Kush to the Mauryas upon intermarriage and 500 elephants....Alexander took these away from the Indo-Aryans and established settlements of his own, but Seleucus Nicator gave them to Sandrocottus (Chandragupta)....."

"Afghanistan's significant ancient tangible and intangible Buddhist heritage is recorded through wide-ranging archeological finds, including religious and artistic remnants. Buddhist doctrines are reported to have reached as far as Balkh even during the life of the Buddha (563 BCE to 483 BCE), as recorded by Xuanzang who refers to the first two lay disciples of Buddha, Trapusa and Bhallika responsible for introducing Buddhism in that country. Originally these two were merchants of the kingdom of Balhika, as the name Bhalluka or Bhallika probably suggests the association of one with that country. They had gone to India for trade and had happened to be at Bodhgaya when the Buddha had just attained enlightenment." 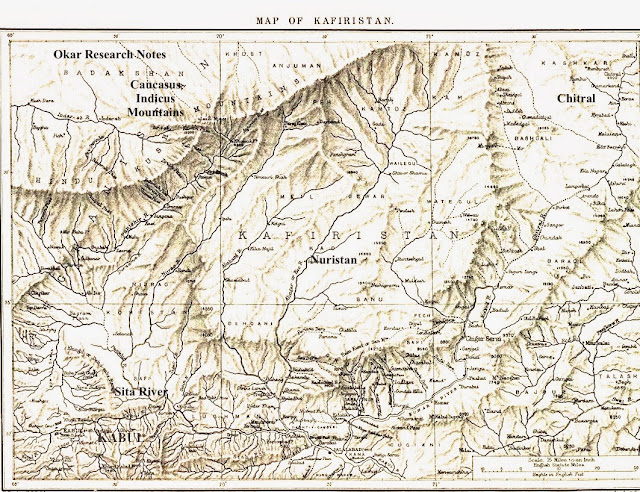 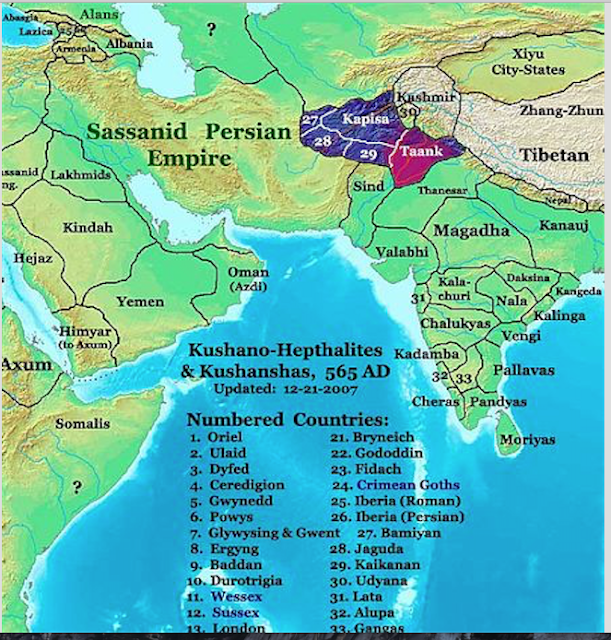 "Kapisa is related to and included Kafiristan. Scholar community holds that Kapisa is equivalent to Sanskrit Kamboja......Kapiśa (= Kapisha), the ancient Sanskrit name of the region that included historic Kafiristan; which is also given as "Ki-pin" (or Ke-pin, Ka-pin, Chi-pin) in old Chinese chronicles. That name, unrelated to the Arabic word, is believed to have, at some point, mutated into the word Kapir. This linguistic phenomenon is not unusual for this region. The name of King Kanishaka, who once ruled over this region, is also found written as "Kanerika", an example of "ś" or "sh" mutating to "r"....A number of legends about Kanishka, a great patron of Buddhism, were preserved in Buddhist religious traditions. Along with the Indian kings Ashoka and Harshavardhana, and the Indo-Greek king Menander I (Milinda), he is considered by Buddhists to have been one of the greatest Buddhist kings."

"In the old tradition of the 84 Mahasiddhas that the Kingdom of Uddiyana was divided between two countries, to the North and South. To the North, it bordered on the land of Shambhala (i.e., the Kingdom of Kapisa), while to the South was Lankapuri. A tenth century king of Uddiyana, named Indrabhuti, had a sister called Laksminkara, who married King Jalendra of Lankapuri. It was to this Lankapuri, with its famous Malaya mount, that Pramodavajra traveled when he left Uddiyana."….http://www.dharmafellowship.org/biographies/historicalsaints/pramodavajra.htm

Gesar & Kapisa-Udyana….."The success of the Turk Fromo Kesaro in overwhelming an intrusive Arab army, sometime between 739-745, may have formed the historic core behind the Gesar epic in Tibet......In the records of the earliest rulers of Ladakh, Baltistan and Gilgit, whose countries were later overrun by incursive Tibetans, royal ancestry is connected to the Bactrian Gesar."..... Vohra, Rohit (1996). "Early History of Ladakh: Mythic Lore & Fabulation: A preliminary note on the conjectural history of the 1st millennium A.D..... p. 217.... writes that these coins with the title Fromo Kesaro appear to refer to the successor of Sahi Tegin (700-738 AD)....Chinese:烏散特勤灑:MC:uo-sân d'ɘk-g'iɘn ṣai=*Horsān tegin šāhi 'Tegin, king of Khurasan'), ruler of the Second Turki Śāhi dynasty at Kapisa-Udyana, whose reign was between 738 and 745 C.E., and who is identified with the 'Frōm Kēsar' (拂菻罽婆: Fúlǐn jìpó:North Western Tang of the Tang shu. See: Harmatta & Litvinsky 1999, pp. 376,380).

"In 672 an Arab governor of Sistan, Abbad ibn Ziyad, raided the frontier of Al-Hind and crossed the desert to Gandhara, but quickly retreated again. The marauder Obaidallah (Ubayd Allah ibn Ziyad) crossed the Sita River and made a raid on Kabul in 698 only to meet with defeat and humiliation."… ..http://www.dharmafellowship.org/biographies/historicalsaints/lord-padmasambhava.htm

"The expansion of the Arabs spread along two fronts: the first moved through Nishapur to Herat, Merv and Balkh, reducing the northern provinces of Persia; the second passed south by way of Sistan (Sijistan) to the Helmand. In 650 Abdallah ibn Amr began the yet further push forwards across the desert of the Dasht-i-Lut. He was followed over the years by succeeding Moslem armies which, through continuous raids, massacres and looting, systematically transformed the wondrous flower-garden of Persian civilization and Mazdean or Buddhist culture into a scorched wasteland."....http://www.dharmafellowship.org/biographies/historicalsaints/lord-padmasambhava.htm

"The Turkish Shahi kingdom of Kapisa-(with Kabul on the south as its capital) for many centuries remained unconquered and primarily Buddhist. In 663 A.D. Ibn Samurah fought his way into Kabul, but his success was only temporary. Nevertheless, reading the T'ang Annals, we note that a party of Uddiyanean ambassadors presented themselves at the Chinese Court in 665 A.D., and granting the length and hardships of the journey, it is practical to assume that the embassy's presence was a direct response to Ibn Samurah's raid. Kapisa's strength, backed by the armies of Imperial China, acted as a major bulwark against Islam penetrating the Pamir, and significantly protected Uddiyana.....In 672 an Arab governor of Sistan, Abbad ibn Ziyad, raided the frontier of Al-Hind and crossed the desert to Gandhara, but quickly retreated again. The marauder Obaidallah (Ubayd Allah ibn Ziyad) crossed the Sita River and made a raid on Kabul in 698 only to meet with defeat and humiliation. Vincent Smith, in Early History of India, states that the Turkishahiya dynasty continued to rule over Kabul and Gandhara up until the advent of the Saffarids in the ninth century. Forced by the inevitable advance of Islam on the west, they then moved their capital from Kapisa to Wahund on the Indus, whence they contin­ued as the Hindushahiya dynasty. This was in 870 A.D. and marks the first time that the Kingdom of Shambhala actually came under Moslem domination. The Hindushahis recaptured Kabul and the rest of their Kingdom after the death of the conqueror Yaqub but never again maintained Kapisa as their capital." -From a History of Uddiyana and the life of Padmasambhava.....http://www.dharmafellowship.org/biographies/historicalsaints/lord-padmasambhava.htm

"The Dardic languages or Dardu are a sub-group of the Indo-Aryan languages natively spoken in northern Pakistan's Gilgit Baltistan, Azad Kashmir and Khyber Pakhtunkhwa, northern India's Jammu and Kashmir, and eastern Afghanistan....According to a model by Asko Parpola, the Dardic languages are directly descended from the Rigvedic dialect of Vedic Sanskrit.....The Nuristani languages (نورستاني) are one of the three groups within the Indo-Iranian language family, alongside the much larger Indo-Aryan and Iranian groups....The Nuristani languages were often confused with each other before concluding a third branch in Indo-Iranian, and also accounting many Burushaski loanwords present in Dardic."

"According to tradition, Padmasambhava was native to Udyana....a major reason for so many Indian Buddhist sages coming to Central Tibet from Kashmir, and notably, the famous Padmasambhava from Uddiyana, was the simple fact that Tibet then ruled much of this region.....It is often reported that the war-like activity and expansion of the Tubo Empire in Central Tibet pressed the Himalayan peoples living in the west to block their advances on the one hand, while they were forced to fight the Muslims on the other. The Dharma Fellowship notes that between “720 and 726 the King of Baltistan moved his seat to Gilgit out of fear of the Tibetan advance.....Although the King of Baltistan remained loyal to his alliance with China, the nobility and peoples of Baltistan are said to have gone over to the Tibetan side. ....Mention of tribute from the King of Kapisa in 748 ascertains that by that date Uddiyana had become a vassal state.”....A Short History of Ladakh - Thrangu Rinpoche.....http://www.rinpoche.com/stories/ladakh.htm#_ftnref5

"Garab Dorje (dga' rab rdo rje, Skt. Surati Vajra, Prahevajra, Pramoda Vajra)......his mother was a nun, the daughter of King Uparaja (Dhahenatalo or Indrabhuti) of Uddiyana. Garab Dorje received all the tantras, scriptures and oral instructions of Dzogchen from Vajrasattva and Vajrapani in person and became the first human vidyadhara in the Dzogchen lineage. Having reached the state of complete enlightenment through the effortless Great Perfection, Garab Dorje transmitted the teachings to his retinue of exceptional beings. Manjushrimitra is regarded as his chief disciple. Padmasambhava is also known to have received the transmission of the Dzogchen tantras directly from Garab Dorje’s wisdom form.....Garab Dorje means 'Indestructible joy.'".....http://www.rangjung.com/authors/Garab_Dorje.htm

"Baltistan is a mountainous region, borders Gilgit in the west, the Xinjiang Autonomous Region (China) in the north, Ladakh in the east, and the Kashmir Valley in the south....The region is inhabited principally by the Balti people of Tibetan descent. The vast majority of the Tibetan population adheres to Islam." 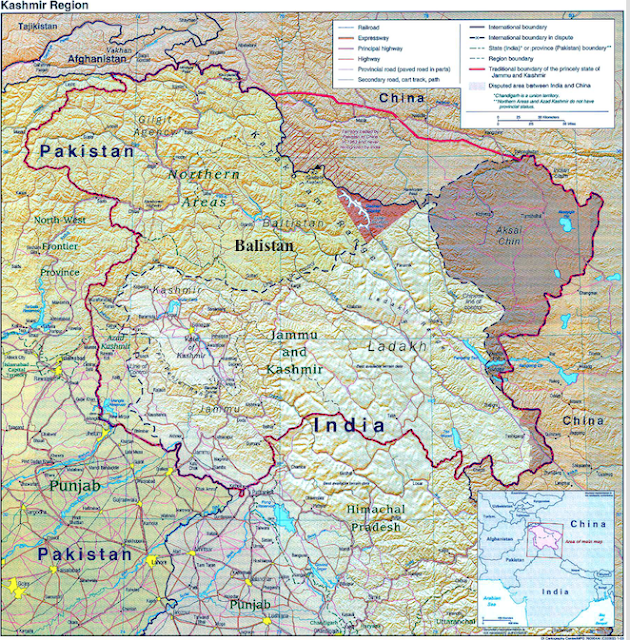