Hui-neng noted that no tradition is sudden or gradual, and that these adjectives should be applied to students rather than to teachings or schools, for some students , 'Awakening' or 'Instantaneous Breakthrough' is more “sudden” than others...... 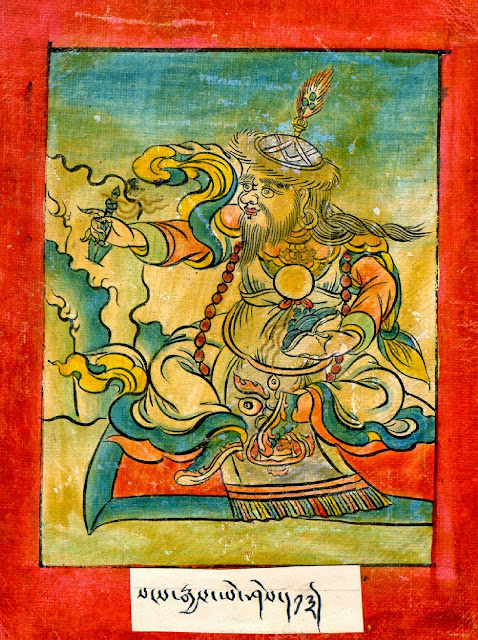 Sangyé Yeshé........Nupchen Sangyé Yeshé (Tib. གནུབས་ཆེན་སངས་རྒྱས་ཡེ་ཤེས་, Wyl. gnubs chen sangs rgyas ye shes) — one of the twenty-five disciples of Guru Rinpoche. He is said to have lived for 113 (or 130?) years. He brought the Anuyoga teachings to Tibet and translated many tantras. He also was a student of Vimalamitra and many other great masters.......Legend has that it was due to his miraculous powers that King Langdarma spared the lay tantrikas when persecuting Buddhist followers in Tibet.

"Nubchen Sangye Yeshe (9th century) was one of the twenty-five principal students of Guru Padmasambhava, founder of the Nyingma school of Tibetan Buddhism. Nubchen Sangye Yeshe is considered an important figure in the development of the White Sangha of lay yogis (ngagpas).....

"Nubchen Sangye Yeshe wrote Armor Against Darkness (Wylie: mun pa’i go cha), a major commentary on The Six Tantras Clarifying the Six Limits (Wylie: dgongs pa ’dus pa’i mdo), the central tantra of the Anuyoga tradition......Armor Against Darkness (mun pa'i go cha)— Munpey Gocha; commentary on Anu Yoga in more than 1,400 pages by Sangye Yeshe of Nub, according to an original tantra known as the Scripture of the Great Assemblage. The Armor has since been published in Delhi, India, as part of Dudjom Rinpoche's monumental publishing effort to preserve the early teachings of the Nyingma school. It is in volume 50–51 of his Nyingma Kahma edition."........http://rywiki.tsadra.org

"Lamp for the Eye in Contemplation ......the Samten Migdron (Tib. bSam-gtan Mig-sgron.)..........discovered in 1908 at Tun-huang by Paul Pelliot.........."this book was entombed in the ruins of Tun-huang, where it remained from the eleventh or twelfth century CE until 1908, when French Sinologist Paul Pelliot explored the cave temples that a local farmer discovered accidentally at the turn of the twentieth century. Therefore, its authenticity is beyond question."

"Samten Migdrön (Tibetan: བསམ་གཏན་མིག་སྒྲོན, Wylie: bsam gtan mig sgron; alternate nomenclature Wylie: rnal 'byor mig gi bsam gtan) is a Tibetan text of historical importance for the historical relationship of Dzogchen and Zen as well identifying the view of its author, Nubchen Sangye Yeshe.......Namkhai Norbu et al. (1986: p. 23) identify Nubchen Sangye Yeshe as the author of a treatise, Samten Migdrön (Tib. bsam gtan mig sgron)........Dalton (2003: unpaginated) in his introduction to the Anuyoga literature of the Nyingma states that: 'Nubchen Sanggyé Yeshé is renowned for having preserved a number of tantric lineages through the so-called “dark period” of Tibetan history (roughly 842-978 C.E.), when state-supported monastic Buddhism fell into decline. Nubchen authored many works, including the Lamp for the Eye in Contemplation (bsam gtan mig sgron), an extensive discussion of early Tibetan contemplative systems......Samten Gyaltsen Karmay also wrote on the Samten Migron."

"In the Samten Migdrön....... Nubchen Sangye Yeshe establishes a salient distinction within the Mahayana between:
the 'Gradual Vehicle of Bodhisattvas' (Sanskrit: Bodhisattvayana); and the 'Sudden Mahayana' corresponding to the Dhyana, Ch’an or Zen school.......The 'suddenness' is further explicated and contextualised by Capriles (2003: p.246) who mentions Huineng:....'In his sutra, Hui-neng noted that no tradition is sudden or gradual, and that these adjectives should be applied to students rather than to teachings or schools, for no doubt some students are more “sudden” than others (Wong Mou-Lam and A. F. Price, translators, 1969); however, the term is used to refer to the Ch’an or Zen School insofar as in it Awakening is not posited as the result of a gradual development through paths and levels, but as an instantaneous breakthrough......For 'instantaneous breakthrough' and 'awakening' refer kensho (Japanese) and satori (Japanese), respectively."....Capriles (2003: p.194) 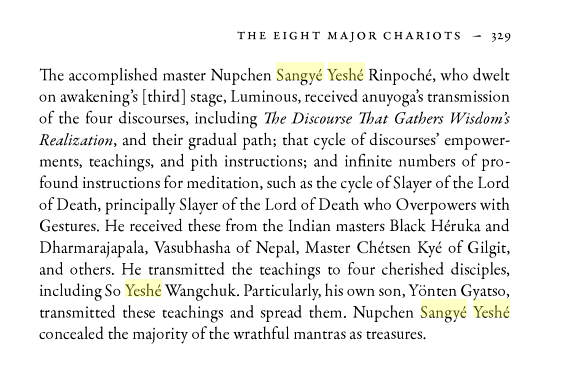 Sangye Yeshe of Nub, Nubchen......(gnubs sangs rgyas ye shes)......"One of the twenty-five disciples of Padmasambhava, he was the chief recipient of the Anu Yoga teachings as well as the Yamantaka of Mahayoga. In addition to Guru Rinpoche, his other teachers were Traktung Nagpo and Chogyal Kyong of India, Vasudhara of Nepal, and Chetsen Kye from the country of Drusha. He visited India and Nepal seven times. When the evil king Langdarma attempted to destroy Buddhism in Tibet, Sangye Yeshe instilled fear in the king by causing an enormous scorpion, the size of nine yaks, to magically appear by a single gesture of his right hand. Through this, Langdarma lost the courage to persecute the Vajrayana sangha who dressed in white robes and kept long hair. Tulku Urgyen Rinpoche is considered one of his reincarnations. Sangye Yeshe means 'Buddha Wisdom.'......from the Glossary in Advice from the Lotus-Born.".....http://www.rangjung.com/authors/Sangye_Yeshe_of_Nub.htm

"There are extensive biographies of Nupchen Sangye Yeshe, including his autobiography. One account of his life can be found in The Hundred Tertons by Jamgön Kongtrül Lodrö Thaye. We know that Nupchen Sangye Yeshe lived for a very long time and his life extended into the reign of Langdarma, the king who was the grandson of Trisong Detsen and who attempted to destroy the Buddhadharma in Tibet. It was Nupchen Sangye Yeshe who prevented that destruction from being complete. At that time Nupchen was the leader of a large community of tantrikas (or lay tantric practitioners). In fact, he was given the title Leader of Thousands of Kila-Wielding Tantrikas. That activity was in violation of the king’s edict that all Buddhism be suppressed. He was, therefore, summoned into the presence of Langdarma, and Langdarma said to him, “Who are you?” Nupchen Sangye Yeshe replied, “I’m a Buddhist tantrika.” Langdarma ask, “Well, what power do you have?” In response, Nupchen Sangye Yeshe extended the forefinger of his right hand and produced, according to some, one scorpion, and according to others, nine iron scorpions, each of which had nine heads and eighteen pincers. Each of those scorpions was the size of a mid-size yak, and they shot around the room. The king was intimidated and said, “OK, I’ll leave you alone.” Nupchen Sangye Yeshe then said, “That’s not all,” and from his finger he shot lightning bolts that zoomed all around the palace, and so on. So the king said, “I’ll leave your lineage alone too.” At that point Nupchen was satisfied.".....http://www.kunzang.org/lineage-nupchen-sangye-yeshe.html

"The White Sangha (white robed) Ngagpa.......The ordained Nyingma Sangha is divided into the Red Sangha (monastic Vinaya) and the White Sangha (not celibate) whose vows based on the Tantric Vows to avoid the 14 root downfalls and of course adhere to the Vows involved. These White Sangha are regared as fully ordained, but not monastics. 'White' as in wearing white robes. Their practice is shamanistic but with the Bodhisattva ideal at its heart."......http://www.freesangha.com/forums/nyingma/the-white-sangha-(white-robed)-ngagpa/

"....the historical process behind the separation of the Great Perfection from Mahāyoga (in the form of the vehicle of Atiyoga), and argued that Nupchen Sanggyé Yeshé (a strong influence on the Zur tradition) was instrumental in this movement...... The earliest reliable source for the idea that Mahāyoga and Atiyoga are each independent vehicles with their own scriptures and their own formulations of the view is Nupchen’s A Lamp for the Eyes of Contemplation.......Nupchen, as I have previously suggested, presented in this work a somewhat artificial corpus of Atiyoga scripture, both describing and perhaps creating an emergent scriptural category. Nupchen’s use of the term “vehicle” in rather haphazard in this work, and it is interesting that in his other extant major work, Armor against Darkness (Mun pa’i go cha), Nupchen treats Mahāyoga, Anuyoga, and Atiyoga as “modes” within a single vehicle, intended for trainees of low, middle, and high capacities respectively....".....The Sweet Sage and The Four Yogas......Sam van Schaik, The British Library........JIATS, no. 4 (December 2008),