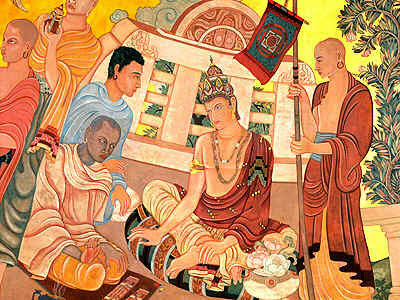 "Chandragupta was the founder of the Maurya dynasty, which ruled ancient India for about 140 years. His troops conquered one northern Indian kingdom after another and claimed lands that stretched as far as west as Afghanistan. In this way, Chandragupta united northern India under one ruler for the first time in history. He established the first territorial empire in ancient India, covering most of the Indian sub-continent. He was assisted by his political adviser, KAUTALYA, who also set out the rules for the administration of the country. This broad framework of administrative organization was adopted by many succeeding dynasties. Chandragupta Maurya’s origins were shrouded in mystery. Having been brought up by peacock tamers, he could be of low caste birth. According to other sources, Chandragupta Maurya was the son of a Nanda prince and a dasi called Mura. It is also possible that Chandragupta was of the Maurya tribe of Kshatriyas. Much of what is known about his youth is gathered from later classical Sanskrit literature, as well as classical Greek and Latin sources which refer to Chandragupta by the names ‘Sandracottos’ or ‘Andracottus’.".....http://historypak.com/wp-content/uploads/2012/08/Chandragupta.jpg

"Kautilya , aka: Chanakya (c. 370 – c. 283 BC) was an Indian teacher, philosopher, and royal advisor......Originally a professor of economics and political science at the ancient Takshashila University, Chanakya managed the first Maurya emperor Chandragupta's rise to power at a young age. He is widely credited for having played an important role in the establishment of the Maurya Empire, which was the first empire in archaeologically recorded history to rule most of the Indian subcontinent. Chanakya served as the chief advisor to both Chandragupta and his son Bindusara.....Chanakya is traditionally identified as Kautilya or Vishnu Gupta, who authored the ancient Indian political treatise called Arthasastra.....s such, he is considered as the pioneer of the field of economics and political science in India, and his work is thought of as an important precursor to classical economics.....His works were lost near the end of the Gupta dynasty and not rediscovered until 1915."

"Chanakya was born in a Brahmin house......According to the Buddhist text Mahavamsa Tika, his birthplace was Taxila.....There is little purely historical information about Chanakya: most of it comes from semi-legendary accounts.....Chanakya was educated at Takshashila, an ancient centre of learning located in north-western ancient India (present-day Pakistan).....He later became a teacher (acharya) at the same place. Chanakya's life was connected to two cities: Takshashila and Pataliputra (present-day Patna in Bihar, India). Pataliputra was the capital of the Magadha kingdom.....Chankaya and Chandragupta have been credited with defeating the powerful Nanda Empire and establishing the new Maurya Empire." 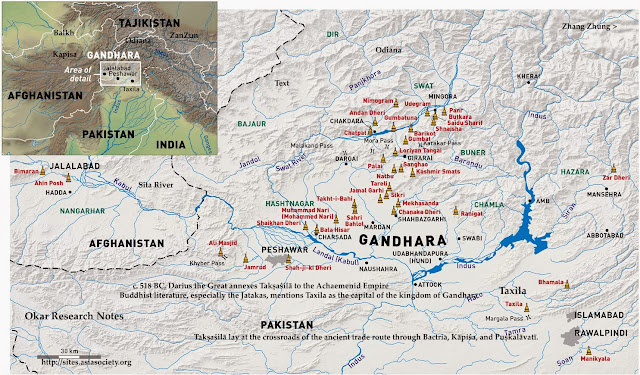 "Taxila was considered to be amongst the earliest universities in the world.....In a 2010 report, Global Heritage Fund identified Taxila as one of 12 worldwide sites most "On the Verge" of irreparable loss and damage....Chanakya was educated at Takshashila, an ancient centre of learning located in north-western ancient India (present-day Pakistan)..... He later became a teacher (acharya) at the same place.."

The Mahavamsa ("Great Chronicle") is a historical book written in the Pali language of the Kings of Sri Lanka. The first version of it covered the period from the coming of Prince Vijaya of the Rarh region of ancient Bengal in 543 BC to the reign of Mahasena of Anuradhapura (334–361).

"Taxila is also described in some detail in the Buddhist Jātaka tales....The Jataka literature mentions it as the capital of the kingdom of Gandhara and as a great centre of learning.....Takṣaśilā is reputed to derive its name from Takṣa, who was the son of Bharata, the brother of the Hindu deity Rama.....Legend has it that Takṣa ruled a kingdom called Takṣa Khanda, and founded the city of Takṣaśilā.....The Chinese monk Faxian (also called Fa-Hien) writing of his visit to Taxila in 405 CE, mentions the kingdom of Takshasila (or Chu-cha-shi-lo) meaning "the Severed Head".....Xuanzang (also called Hieun Tsang), another Chinese monk, visited Taxila in 630 and in 643, and he called the city as Ta-Cha-Shi-Lo. The city appears to have already overrun by the Huns and been in ruins by his time. Taxila is called Taxiala in Ptolemy’s Geography..... In the Historia Trium Regum (History of the Three Kings) composed by John of Hildesheim around 1375, the city is called Egrisilla......

"Taxila may have dated back to at least the 5th century BC......Archaeological excavations later showed that the city may have grown significantly during the Persian occupation of 6th century BC...... Takṣaśilā lay at the crossroads of the ancient trade route through Bactria, Kāpiśa, and Puṣkalāvatī. This route connected Taxila with the western Asia.....

"There are carbon dates c. 2550-2288 BCE for the earliest settlement at Taxila (in the Hathial area), with ties to the nearby Sarai Khola, an earlier site.....Also, some early Indus period pottery shards were found in this area.........Pottery dated c. 900 BCE shows ties between Taxila and Charsadda (ancient Pushkalavati), also in the kingdom of Gandhara.......c. 518 BC, or perhaps earlier – Darius the Great annexes Takṣaśilā to the Achaemenid Empire..... Taxila, as the capital of Gandhara satrapy, was evidently under Achaemenian rule for more than a century. Buddhist literature, especially the Jatakas, mentions Taxila as the capital of the kingdom of Gandhara."