Mithras in the Greek Magical Papyri

"The Greek Magical Papyri (Latin Papyri Graecae Magicae, abbreviated PGM) is the name given by scholars to a body of papyri from Graeco-Roman Egypt, which each contain a number of magical spells, formulae, hymns and rituals. The materials in the papyri date from the 2nd century BC to the 5th century AD. The manuscripts came to light through the antiquities trade, from the 18th century onwards. One of the best known of these texts is the so-called Mithras Liturgy."..Betz, Hans Deiter. The Greek Magical Papyri in Translation including the Demotic spells. Chicago: University of Chicago Press, 1986. 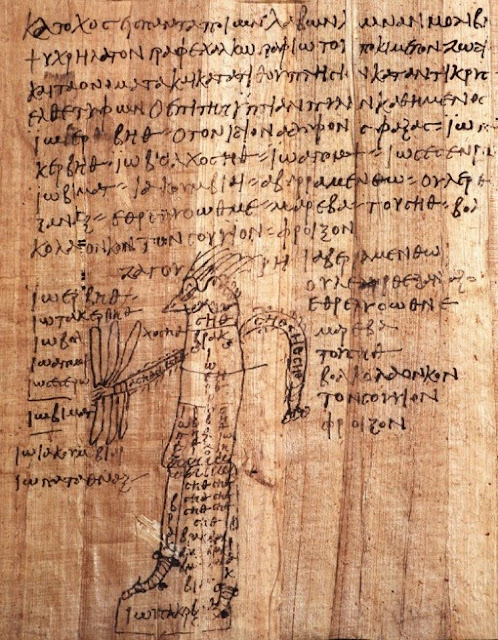 "Mithras in the Greek Magical Papyri……Betz’ English translation of the Greek magical papyri. This is a collection of magical texts in multiple volumes discovered at Thebes in the early 19th century. The best known of these is the so-called Mithras liturgy, which is in reality just a spell like the rest. The reason it is called the Mithras liturgy is that it contains a mention of “Helios Mithras”….."…http://www.roger-pearse.com/weblog/2011/04/28/mithras-in-the-greek-magical-papyri/.…Betz, The Mithras Liturgy: Text, Translation and Commentary (2003),

"The texts were published in a series, and individual texts are referenced using the abbreviation PGM plus the volume and item number. Each volume contains a number of spells and rituals. Further discoveries of similar texts from elsewhere have been allocated PGM numbers for convenience……Many of these pieces of papyrus are pages or fragmentary extracts from spell books, repositories of arcane knowledge and mystical secrets. As far as they have been reconstructed, these books appear to fall into two broad categories: some are compilations of spells and magical writings, gathered by scholarly collectors either out of academic interest or for some kind of study of magic; others may have been the working manuals of travelling magicians, containing their repertoire of spells, formulae for all occasions. These often poorly educated magic-users were more like showmen than the traditional Egyptian wizards, who were a highly educated and respected priestly elite. The pages contain spells, recipes, formulae and prayers, interspersed with magic words and often in shorthand, with abbreviations for the more common formulae. These spells range from impressive and mystical summonings of dark gods and daemons, to folk remedies and even parlour tricks; from portentous, fatal curses, to love charms, cures for impotence and minor medical complaints….In many cases the formulaic words and phrases are strikingly similar to those found in defixiones (curse tablets or binding spells, κατάδεσμοι in Greek), such as those we find inscribed on ostraka, amulets and lead tablets. Since some of these defixiones date from as early as the sixth century BC, and have been found as far afield as Athens, Asia Minor, Rome and Sicily (as well as Egypt), this provides a degree of continuity and suggests that some observations based on the PGM will not be altogether inapplicable to the study of the wider Greco-Roman world."..http://en.wikipedia.org/wiki/Greek_Magical_Papyri

"PGM V. 1-53 begins:…..Oracle of Sarapis, [by means of] a boy, by means of a lamp, saucer and bench: “I call upon you, Zeus, Helios, Mithra, Sarapis, / unconquered one, Meliouchos, Melikertes, Meligenetor, ABRAAL BACHAMBECHI BAIBEIZOTH (EBAI BEBOTH)…"….Mithras: The Persian god is mentioned only a few times in PGM (note III. 100, 462; IV. 482) and each time as being identical with Helios or with Zeus-Helios-Sarapis (see PGM V. 4). See Nilsson, GGR II,668-72; Dieterich, Mithrasliturgie 67ff. Vermaseren,”Mithras in der Romerzeit,” in M. J. Vermaseren, ed., Die orientalischen Religionen in Romerreich, EPRO 93 (Leiden: Brill, 1981) 96-120, with bibliography….Betz, The Mithras Liturgy: Text, Translation and Commentary (2003), 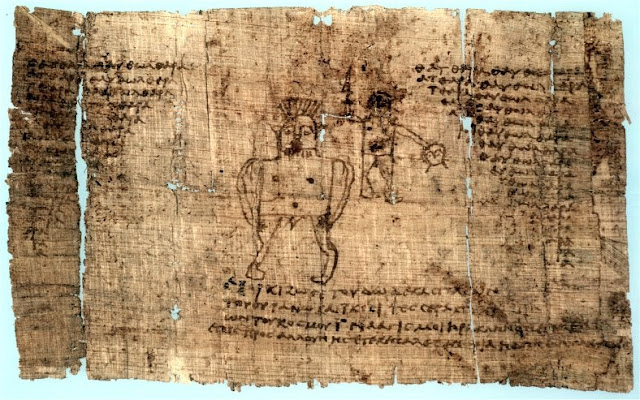 The religion of the Papyri Graecae Magicae is an elaborate syncretism of Greek, Egyptian, Jewish (see Jewish magical papyri), and even Babylonian and Christian religious influences engendered by the unique milieu of Greco-Roman Egypt. This syncretism is evident in the Papyri in a variety of ways. Often the Olympians are given attributes of their Egyptian counterparts; alternatively this could be seen as Egyptian deities being referred to by Greek names.[citation needed] For example Aphrodite (who was associated with the Egyptian Hathor), is given the epithet Neferihri—from the Egyptian Nfr-iry.t, "nice eyes" (PGM IV. 1266)...http://en.wikipedia.org/wiki/Greek_Magical_Papyri

"Within this profusion of cultural influences can still be seen classical Greek material, and perhaps even aspects of a more accessible "folk-religion" than those preserved in the mainstream literary texts.[dubious – discuss] Sometimes the Greek gods depart from their traditional Olympian natures familiar to Classicists, and seem far more chthonic, demonic and bestial. This is partly the influence of Egyptian religion, in which beast cult and the terror of the divine were familiar elements; equally the context of magical texts makes such sinister deities appropriate."…..http://en.wikipedia.org/wiki/Greek_Magical_Papyri

"The “Mithras Liturgy,”1 the most famous (or infamous) of all the material in the Papyri graecae magicae (hereafter, PGM), occupies lines 475–8202 of the Paris Papyrus, an eclectic collection of charms, rites, and various recipes, which is alternatively designated PGM 4. Complex in content and structure, the Liturgy opens with an opening prayer, then describes the ritual in what is by far the longest portion of the text, and closes with instructions for preparing and performing the ritual. The aim of the Liturgy is to furnish a revelation for its practitioner, guiding him through a complex series of divine realms into the presence of the highest god who is affiliated with the noetic sun, referred to as Helios Mithras. This revelation is to be dictated aloud and performed either for the benefit of the practitioner himself or for a “fellow-initiate.” Mithras, the god who sits at the top of this particular cosmology, was one of the more notable of the deities around whom a mystery cult developed, perhaps because of the sheer strangeness of his devotion."…..http://muse.jhu.edu/journals/hel/summary/v034/34.1stoholski.html…..HELIOS, vol. 34 no. 1, 2007 © Texas Tech University Press

"The PGM (Papryi Graecae Magicae) is the name given to a cache of papryi of magical spells collected by Jean d'Anastaisi in early 1800's Egypt. Hans Deiter Betz, in his introduction to the newest English translation, speculates that these papyri may have been found in a tomb or temple library and the largest papyri may have been the collection of one man in Thebes.[4 ]However, the exact provenance for the PGM is unknown. Betz states that through literary sources it is known that quite a number of magical books of spells were collected in ancient times, most of which were destroyed.[5] Thus, the PGM are a very important source for first-hand information about magical practices in the ancient Mediterranean. The PGM spells run the gamut of magical practices from initiatory rites for immortality to love spells and healing rites. Most of the papyri are in Greek and Demotic with glosses in Old Coptic and are dated between the 2nd century BC and the 5th century AD. The spells call upon Greek, Egyptian, Jewish, Gnostic and Christian deities."….. http://www.sonoma.edu/users/h/holmstrl/EGmagic.html

"The Greeks speculated that humans and gods "had the same mother", but a huge gap existed between them. From ancient times to the latest date of the PGM, Greek notions about the relationship between human existence and divine existence took a variety of forms but never followed the Egyptian pattern of the possibility of declarative divine identity. The ancient Greeks believed that communion with the gods was possible as in the Eleusian and Dionysian mysteries and Empedocles declared he had the knowledge to make himself immortal. But, the Greek idea of a divine spark within the human soul which can be activated, contemplated and re-united with the gods still assumes an other-ness of deity and validates the fundamental separateness of human existence from the divine."….. Corrigan, K. "Body and Soul in Ancient Religious Experience" in Armstrong, A.H. ed. Classical Mediterranean Spirituality

"Demotic (from Greek: δημοτικός dēmotikós, "popular") refers to either the ancient Egyptian script derived from northern forms of hieratic used in the Delta, or the stage of the Egyptian language following Late Egyptian and preceding Coptic. The term was first used by the Greek historian Herodotus to distinguish it from hieratic and hieroglyphic scripts. By convention, the word "Demotic" is capitalized in order to distinguish it from demotic Greek….Early Demotic (often referred to by the German term Frühdemotisch) developed in Lower Egypt during the later part of the 25th dynasty, particularly found on stelae from the Serapeum at Saqqara. It is generally dated between 650 and 400 BC as most texts written in Early Demotic are dated to the 26th dynasty and the following Persian period (the 27th dynasty)."….http://en.wikipedia.org/wiki/Demotic_(Egyptian)