Emanuel Swedenborg (1688–1772 AD) .......a Swedish scientist, philosopher, theologian, revelator, and mystic..........Renowned most of his life for his contributions to the natural sciences, Swedenborg had a spiritual awakening in his 50s and published what is now his most famous work — a description of the afterlife called "Heaven and Hell."...(1758 AD)...Highly regarded after his death by philosophers and mystics, Swedenborg claimed he could visit heaven and hell at will and that his ideas about spirituality, God, and Christ came to him in dreams and visions.....

"Swedenborg was fascinated with the 'Shambhala' myth, and under cover of employment for the Swedish East India Company and his appointment to the Swedish Court as Master Ironmaster and Miner...... his interest in India and Central Asia, and the sexual rites that went with his New Jerusalem Society, later to be frequented by William Blake....Swedenborg became intrigued by the similarity of Yogic Tantra techniques of mediatation and sexual magic to Kabbalistic techniques....Swedenborg argued that the Yogis of Central Asia discovered the secrets of Kabbalism long before the Jews....Gershom Scholem also noticed that, already in the thirteenth century, in the Kabbalah of Abraham Abulafia, (1240- 1291 AD) the techniques used 'to aid the ascent of the soul, such as breathing exercises, the repition of divine names, and meditations on colours, bear a marked resemblance to those of Indian Yoga and Muslim Sufism."....Page 137.....Black Terror White Soldiers: Islam, Fascism & the New Age.....By David Livingstone 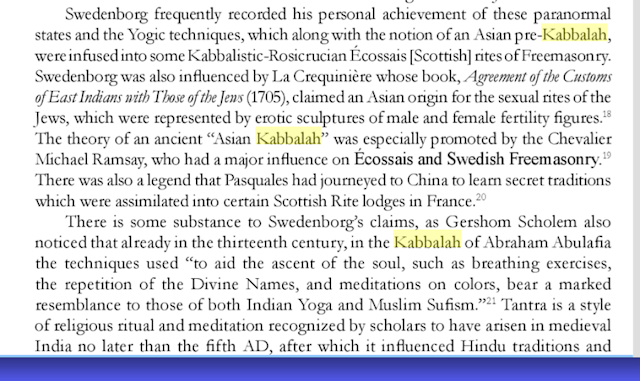 "The Swedish East India Company (Swedish: Svenska Ostindiska Companiet or SOIC) was founded in Gothenburg, Sweden, in 1731 for the purpose of conducting trade with the Far East.....In 1736 Swedenborg wrote to King Frederick, requesting a 3-4 year leave of absence to travel to the Continent.... he presented a different rationale than his actual complex agenda.....his mission included political-military intelligence work, Moravian-Masonic contacts, and Kabbalistic-Hermetic research.....while in Hamburg, Swedenborg pursued his investigations in Jewish mysticism....he later recorded that he achieved a signigicant psychic breakthrough in August 1736, while in Amsterdam.....perhaps he learned somthing of Kabbalistic brathing and meditaion techniques from the Jews in Hanover or from Moravians living in the Jewish community in Amsterdam. Swedenborg noted that he began to experiment with breath control.....In August 1736 he moved on to Paris where he lived for 19 months....his journal was interspersed with dream sequences and he was involved with Masonic and Freemasonry in Paris....in 1738 he left Paris and was on his way to Italy.....in Lyon, he visited the Library of the Jesuits, where Chevalier Ramsay had earlier studied the mystical manuscripts brought from China by Jesuit missionaries....Ramsay was assimilating Chinese notions of the 'Heaven Man' into Kabbalistic notions of 'Adam Kadmon, the Grand Man....themes that he wove into Masonic philosophy.....he arrived in Turin in March 1738....of further interest to Swedenborg would be Rehbinder' alchemical studies and contacts.....he contacted some Jesuits who dabbled in alchemy....Swedenborg learend of the Jesuit Athanasius Kircher's Kabbalistic interpretation of the Tabula Isiaca, which drew heavily on the Sepher Yetzirah and Zohar..........Emanuel Swedenborg, Secret Agent on Earth and in Heaven: Jacobites, Jews and ...edited by Marsha Keith Schuchard......https://books.google.com/books?id=RzvBUj_gvecC&pg=PA221&lpg=PA221&dq=Swedenborg+Swedish+East+India+Company&source=bl&ots=gOGynliT1s&sig=9k2hjYyl_ub1kn_I1Pb17OhpgZ4&hl=en&sa=X&ved=0ahUKEwiDyOCS_tbLAhXBtIMKHcXfCBMQ6AEIMTAC#v=onepage&q=Swedenborg%20Swedish%20East%20India%20Company&f=false

"D. T. Suzuki, the Japanese scholar who would later become world-famous for his many books on Zen, was introduced to Swedenborg sometime during his years working with Paul Carus in Illinois (1897-1908). ......A correspondence with Swedenborgians in the Philadelphia area led to an invitation to translate Heaven and Hell into Japanese, which was accomplished during a Christmas-time visit to London. Upon returning to his homeland Suzuki introduced Swedenborg to Japan by publishing that translation in 1910, followed by Divine Love and Wisdom and The New Jerusalem and Its Heavenly Doctrine (both 1914), and Divine Providence (1915). In addition, he published his own study in Japanese entitled, simply, Swedenborg (1915). Much of this was compiled from English sources but the introductory first chapter was original and notes that: 'The theological doctrines presented by Swedenborg have some similarity to those of Buddhism... True salvation rests upon a harmonious unity of what one believes with what one does. Wisdom and Love are the manifestation of the Divine, and Love has more depth and breadth than Wisdom. The Divine Providence reaches into the minutest things in the universe. There must not be any occurrences that happen by accident.....In 1927 Suzuki published a nine-page article suggesting that Swedenborg's doctrine of correspondences may be compared with the Shingon doctrine that phenomena are aspects of Mahavairocana Buddha's ceaseless teaching."......The Dharma of Emanuel Swedenborg: A Buddhist Perspective.....By David Loy

"The notion of an “Oriental Kabbalah” began with Swedenborg... and was especially promoted by the Chevalier Michael Ramsay of the Hindu Tantra as an expression of an 'Asian Kabbalah'......Page 77.....By David Livingstone......Transhumanism: The History of a Dangerous Idea

"While associating with Moravian and Jewish mystics in London, the 56 year old Swedenborg learned how to perform the mystical Kabbalistic marriage within his mind, through the sublimatin of his sexual energy into visionary energy. By meditating on the male and female potencies concealed in the vessels of Hebrew letters, by visualizing these letters in the forms of human bodies, by regulating the inhalation and exhalation of breath, and by achieving an erection without ejaculation...the Kabbalist could achieve a state that elevated him to higher realms.....Marsha Schuchard has found that grail of researchers - original documents that confirm suspicions about her subject. In this case they are surviving records of the unworldly Moravian Chapel in Fetter Lane showing how William Blake's family were worshippers at this shrine of eroticism...She gives a close reading of the more rewarding poems such as "The Crystal Cabinet" and "Long John Brown and Little Mary Bell". These, she says, suggest sex practices aimed at visionary breakthrough, while Swedenborg's belief that "the great toe communicates with the genitals" is demonstrated by Blake's self-portrait "William", showing his body flung back while a flaming star descends toward his left foot. Weird stuff, indeed.."........Marsha Keith Schuchard: Why Mrs Blake Cried...Swedenborg, Blake and the Sexual Basis of Spiritual Vision.....

"The secret and mystical sexual practices at the heart of William Blake’s creative and spiritual life ......Reveals newly discovered family documents connecting Blake’s mother and Blake himself to Moravian and Swedenborgian erotic and visionary experimentation ......Shows Blake had access to kabbalistic and tantric techniques of psychoerotic meditation, which used sexual arousal to achieve spiritual vision..... Marsha Keith Schuchard shows that Blake and his wife, Catherine, were influenced by secret kabbalistic and tantric rituals designed to transcend the bonds of social convention. Her exhaustive research provides a new context for understanding the mystical practices at the heart of Blake’s most radical beliefs about sexualized spirituality and its relation to visionary art." ...William Blake's Sexual Path to Spiritual Vision by Marsha Keith Schuchard (2008) 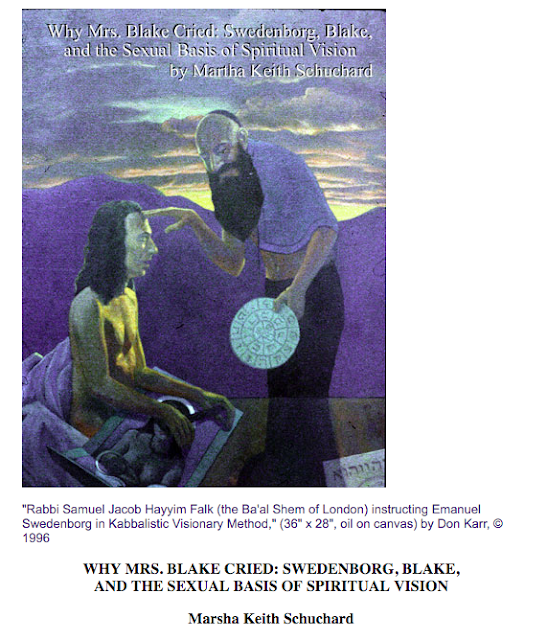 "Andrew Michael Ramsay (1686 – 1743 AD), commonly called the Chevalier Ramsay, was a Scottish-born writer who lived most of his adult life in France. He was a Baronet in the Jacobite Peerage.....Ramsay's works include:.......Les voyages de Cyrus (London, 1728; Paris, 1727): Engl. 'The travels of Cyrus to which is annexe'd a discourse upon the theology & mythology of the pagans' – a book composed in avowed imitation of Fenelon's ''Les avantures de Télémaque''........http://www.freemasons-freemasonry.com/ramsay_biography_oration.html

"William Blake’s desire for concubines, following the example of Biblical Patriarch Abraham, which reportedly made his wife cry, prompting Blake to give up the plan. .....Sanctified sexuality, however, never left his imagination and it went far beyond Biblical concubines and included the Jewish esoteric beliefs of the Kabbalah, ‘celestial marriage’ practised by the Moravians and Swedenborgians, as well as Indian Yogic and Tantric traditions of sacred sex. And it all began at home, when his parents became members of the Moravian Congregation of the Lamb in Fetter Lane, London...The Moravians, who originated in Czechoslovakia and migrated to Saxony, were a sectarian fellowship under eccentric German nobleman Nicolaus von Zinzendorf. ."

"The Moravian Church is one of the oldest Protestant denominations in the world, with its heritage dating back to the Bohemian Reformation in the fifteenth century.......their heritage began in 1457 in Bohemia (and its crown lands, Moravia and Silesia), then an autonomous kingdom within the Holy Roman Empire. This region today is part of the Czech Republic.....The first printed edition of the Gesar epic was published in Beijing in 1716 in a Mongolian version. It was this text which formed the basis for the first Western-language translation, a Russian version published by the Moravian missionary Isaac Jacob Schmidt in 1836. A German translation followed in 1839. Another Moravian missionary, August Hermann Francke, collected and translated a version from Lower Ladakh between 1905 and 1909.....At ﬁrst the Moravians had no intention at all to evangelize Tibet......... and the Lower Ladakhi version of the Gesar saga that was edited by her husband....A Russian translation of the Mongolian Geser texts, which had been printed in Beijing from 1716 onwards, was published by the Moravian missionary Isaak Jakob Schmidt in 1836; a German translation followed in 1839."

"Abraham Abulafia (1240- 1291 AD).....in his later writings, the founder of prophetic Kabbalah produces a synthesis between Maimonides’ Neoaristotelian understanding of prophecy as the result of the transformation of the intellectual influx into a linguistic message and techniques to reach such experiences by means of combinations of letters and their pronunciation, breathing exercises, contemplation of parts of the body, movements of the head and hands, and concentration exercises.".....https://en.wikipedia.org/wiki/Abraham_Abulafia

Posted by OkarReview at 6:47 AM