A Cavern of Treasures and Shenchen Luga (1017 AD)

"A Cavern of Treasures (Tibetan: མཛོད་ཕུག, Wylie: mdzod phug) is a terma uncovered by Shenchen Luga (Tibetan: གཤེན་ཆེན་ཀླུ་དགའ, Wylie: gshen chen klu dga') in the early eleventh century. ...Dan Martin identifies the importance of this scripture for studies of the Zhang-Zhung language....'For students of Tibetan culture in general, the mDzod phug is one of the most intriguing of all Bon scriptures, since it is the only lengthy bilingual work in Zhang-zhung and Tibetan (some of the shorter but still significant sources for Zhang-zhung are signalled in Orofino 1990.'...."...https://en.wikipedia.org/ 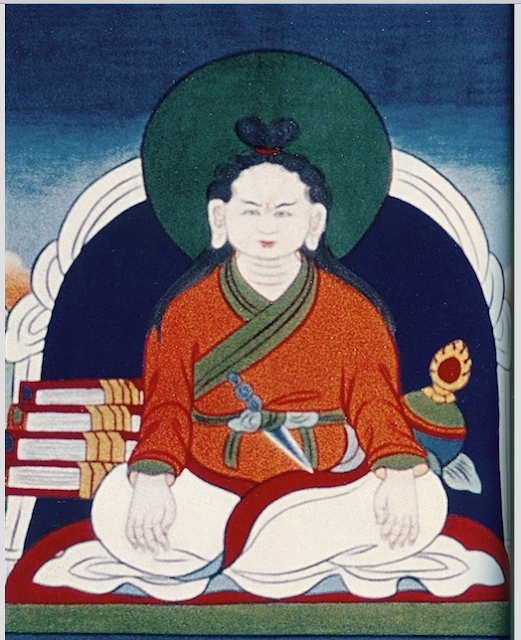 "Shenchen Luga was born in 996 in the Dringtsham (‘bring ‘tshams) region of Tsang, to a father of the sga clan and a mother who was the sibling of a Bonpo. Not much about his early years is known, but he did not seem to be formally engaged in religious pursuits until his massive corpus of treasure revelation appeared in 1017 AD, when he was 21. He spent the rest of his life teaching and debating, and perhaps established a seat at Darding (dar lding) near the town of Geding (dge lding). His greatest disciple was Zhuyé Legpo (zhu yas legs po), who eventually became the progenitor of his own lineage. In 1035 AD, the Buddhist monk Lotön Dorjé Wangchuk (lo ston rdo rje dbang phyug) allegedly poisoned and thus murdered Shenchen near the latter’s birthplace.".....https://collab.itc.virginia.edu/wiki/renaissanceold/Biography%20of%20Shenchen%20Luga.html


"Shenchen Luga was perhaps the greatest and most popular Bönpo of the Tibetan Renaissance period, if not in all of the modern history of Bön. Adepts and supporters trace the religion back to Shenrab Miwo (gshen rab mi bo) and beyond, but there’s no question that the actual religion of Bön, in the admittedly trendy sense of an established and systematized tradition, was founded by Shenchen Luga. His treasure revelations of 1017 and the years that followed (though Shenchen’s own narrative and those of his biographers attribute almost all of his texts to this one year) forged a uniquely Bönpo identity with the very instruments (mature doctrinal, ritual, and narrative texts), strategies (treasure revelation), and sensibilities (lineal autonomy, historical validity) that worked so effectively for the Nyingma Buddhists of the same period. Around the scholarship and personality of Shenchen, the Bön tradition coalesced for the first time, blossoming into a widespread and internally consistent religious system that would inspire polemical publications and considerable anxiety on the part of the more dominant Buddhist traditions for many hundreds of years to come.".....https://collab.itc.virginia.edu

"There were at least fifteen treasure revealers before Shenchen.."........https://collab.itc.virginia.edu

"The Tibetan word, terma, literally means “treasure” and refers to Buddhist (or Bon) scriptures and relics retrieved from the distant past through a process of revelation. There are two principal types of treasures: earth terma, discovered in the Tibetan and Himalayan landscape, and mind terma, discovered in the mind of the terton or “treasure revealer.” The latter should be distinguished with pure visions, or daknang, which appear in the mind of realized masters, but do not necessarily claim ancient origins. Though its source is located in the distant past, a terma is intended for the time and place of its discovery. "......http://shambhalatimes.org/2010/07/01/what-is-terma/ 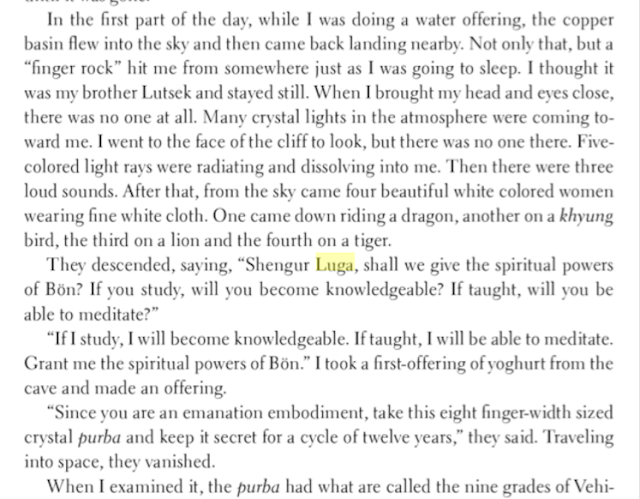 "In the year 1017 AD, Shenchen Luga (gShen-chen klu-dga') came from eastern Tibet and discovered two large wooden boxes containing many Bonpo texts in the Tibetan language, which had been buried at Drigtsam Thakar ('brig-mtsham mtha' dkar) in Tsang Province, near the ancestral seat of the Shen clan...... It was principally this discovery that led to the revival of Bon in central Tibet in the eleventh century...."....http://www.drjameshenley.us/sutra-system/shenchen-luga-and-the-revival-of-bon.html 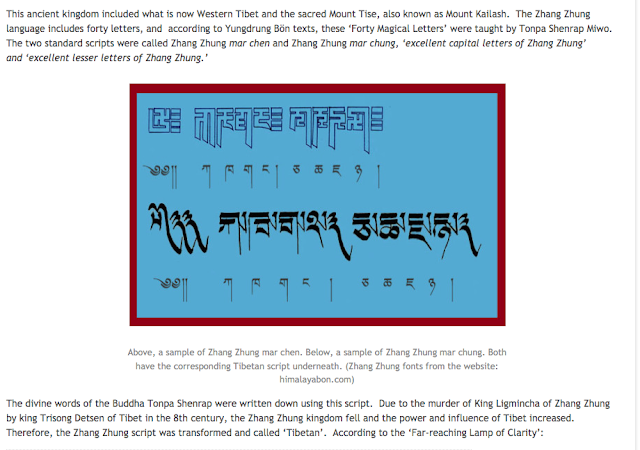 "Zhang-zhung Language.......The first Bön scriptures were translated from the language of Zhang-zhung into Tibetan. The works contained in the Bonpo canon as we know it today are written in Tibetan, but a number of them, especially the older ones, retain the titles and at times whole passages in the language of Zhang-zhung......Until the 8th century Zhang-zhung existed as a separate kingdom, comprising the land to the west of the central Tibetan provinces of (dBus) and Tsang (gTsang) and generally known as Western Tibet, extending over a vast area from Gilgit in the west to the lake of Namtsho (gNam-mtsho) in the east and from Khotan in the north to Mustang in the south. The capital was called Khyunglung Ngulkhar (Khyung-lung dngul-mkhar), the 'Silver Palace of Garuda Valley', the ruins of which lie in the upper Sutlej valley south-west of Mount Kailash. Its people spoke a language classified among the Tibeto-Burmese group of Sino-Tibetan languages....The country was ruled by a dynasty of kings which ended in the 9th century A.D. when the last king, Ligmincha (Lig-min-skya) was assassinated by order of the Buddhist king of Tibet (Trisong Detsen)......and Zhang-zhung militarily annexed by Tibet.....The Queen of Ligmincha was later able to avenge the death and likewise murdered King Trisong Detsen...... Since that time Zhang-zhung has become gradually Tibetanized and its language, culture and many of its beliefs have been integrated into the general frame of Tibetan culture. Due to its geographical proximity to the great cultural centres of central Asia such as Gilgit and Khotan, it was through Zhang-zhung that many religious concepts and ideas reached Tibet."......http://www.acbon.org/ACB/index.php/yungdrung-boen 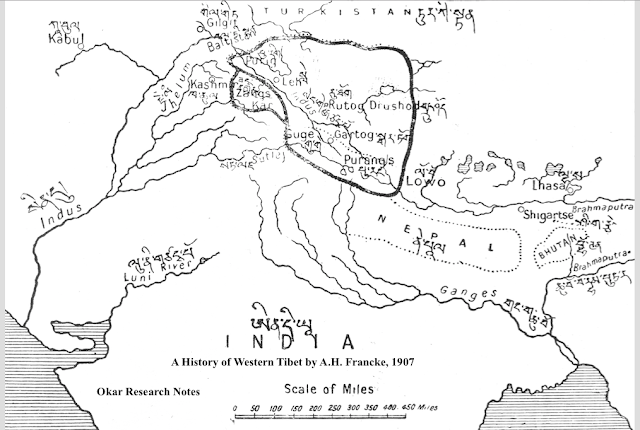 "Zhang-zhung Tapihritsa or Tapahritsa (c 7th ~ 8th century) was a Bon practitioner who achieved the Dzogchen mastery of the rainbow body and consequently, as a fully realised trikaya Buddha, is invoked as a iṣṭadevatā (Classical Tibetan: yi dam) by Dzogchen practitioners in both Bon and Tibetan Buddhism. He famously achieved the rainbow body achievement.....The historical Tapihritsa was born in Zhangzhung to a family of nomads. Tapihritsa's principal teacher was Dawa Gyaltsen.....Tapihritsa was contemporaneous with Ligmincha, King of Zhangzhung, and Trisong Detsen, Emperor of Tibet."....Karmay, Samten G; Watt, Jeff, eds. (2007). Bon, the magic word : the indigenous religion of Tibet

"The Bön religion.....during the reign of King Drigum Tsenpo (Gri-gum btsan-po') in the 7th century B.C.E. All but the 'Bön of Cause' (rgyu'i bon: the first four of the Nine Ways) was abolished, and most of its practitioners banished. They were, however, able to conceal many texts as terma (gTer-ma, 'treasure') that were rediscovered at a later date by tertons (gTer-ston, 'treasure discoverers').....From the 8th to 11th centuries the practice of Bön went mainly underground. The year 1017 AD marks the resurgence of Bön, which began with the discovery by Shenchen Luga (gShen-chen klu-dga', 996-1035) of a number of important concealed texts.".....http://www.acbon.org/ACB/index.php/yungdrung-boen 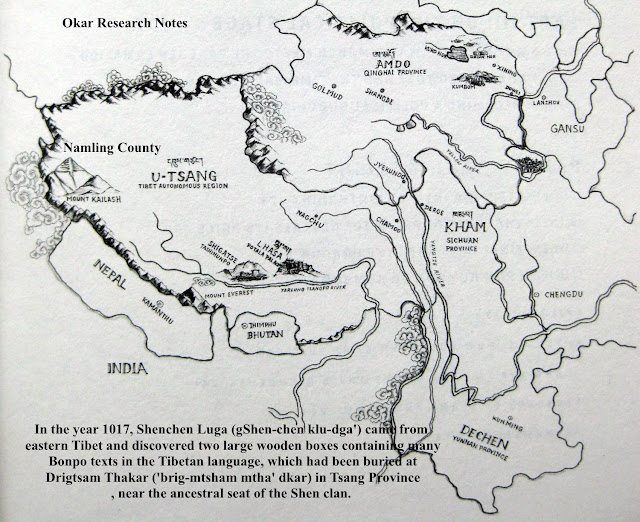 "One of the most renowned descendants of the Zhu family lineage is the holy lama Zhu Ye Lekpo. Born into the divine Zhu family, he heard of the Great Shen who had discovered Bön texts and who was the catalyst for a resurgence of the Yungdrung Bön tradition. This Great Shen was Shenchen Luga. Zhu Ye Lekpo went to Shenchen Luga and requested teachings. Shenchen Luga tested his faith by having him act as an attendant for eight years before giving him any teachings or transmissions. However, Zhu Ye Lekpo became Shenchen Luga’s main disciple and responsible for the dzogchen teachings and practice. He founded Ri Zhing Monastery in the eleventh century. This monastery became very famous. At one time, the Tibetan government donated to it more than a dozen estates and it housed over three hundred monks. It was completely destroyed during the Chinese cultural revolution. In the 1980’s, members of the Zhu family began restoring one of the hermitages connected with the monastery. The descendants of the Zhu family now live in India."......http://ravencypresswood.com/category/uncategorized/