The Indo-Greek King Menander I (Pali Milinda) (c. 165 –130 BC) was born in Bactria, but brought up in Ariana (the Kabul valley) and in the early years of his rule expanded his father’s kingdom to the Indus valley and beyond, perhaps later establishing his capital at Sàgala.

"The Milinda Panha (Pali trans. "Questions of Milinda") is a Buddhist text which dates from approximately 100 BC. It is included in the Burmese edition of the Pāli Canon of Theravada Buddhism as a book of the Khuddaka Nikaya; however, it does not appear in the Thai or Sri Lankan versions. A shorter version of it, however, is featured in Chinese Mahayana translations.....It purports to record a dialogue in which the Indo-Greek king Menander I (Pali Milinda) of Bactria, who reigned in the 2nd century BCE, poses questions on Buddhism to the sage Nāgasena....The earliest part of the text is believed to have been written between 100 BC and 200 AD The text may have initially been written in Sanskrit; however, apart from the Sri Lankan Pali edition and its derivatives, no other copies are known.." 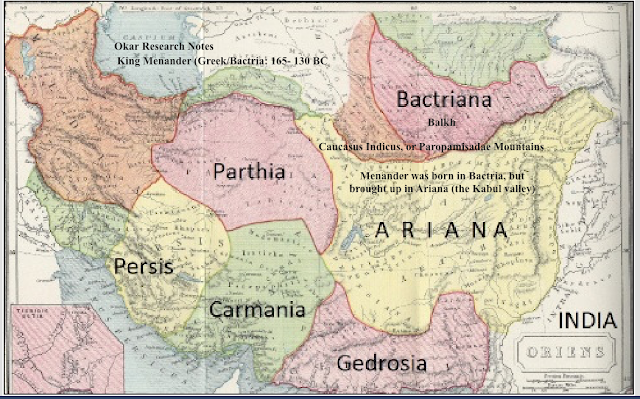 "Menander was born in Bactria, but brought up in Ariana (the Kabul valley) and in the early years of his rule expanded his father’s kingdom to the Indus valley and beyond, perhaps later establishing his capital at Sàgala. Unlike Bactria, which was predominantly influenced by Greek culture, these new areas were already Buddhist. Menander, then, would have been educated in the Greek traditions but would have had direct contact with Buddhism and no doubt often met monks living in his kingdom."....http://www.buddhanet.net/pdf_file/milinda.pdf

"The Milinda Pa¤ha is, with good reason, a famous work of Buddhist literature, probably compiled in the first century B.C. It presents Buddhist doctrine in a very attractive and memorable form as a dialogue between a Bactrian Greek king, Milinda, who plays the ‘Devil’s Advocate’ and a Buddhist sage, Nàgasena. The topics covered include most of those questions commonly asked by Westerners such as “If there is no soul, what is it that is reborn?” and “If there is no soul, who is talking to you now?”....http://www.buddhanet.net/pdf_file/milinda.pdf

"The Milinda Pa¤ha is a Pali book written in about the 1st century B.C. King Milinda, a Bactrian king who ruled the northeast of India, met a learned monk called Nàgasena and the king put to him a number of questions on the philosophy, psychology, and ethics of Buddhism. I presume this debate was conducted in the Bactrian Greek language, but was later translated into Pali and Sanskrit."...http://www.buddhanet.net/pdf_file/milinda.pdf

"Milinda called upon the Yonakas and the brethren to witness: 'This Nâgasena says there is no permanent individuality (no soul) implied in his name. Is it now even possible to approve him in that?' And turning to Nâgasena, he said: 'If, most reverend Nâgasena, there be no permanent individuality (no soul) involved in the matter, who is it, pray, who gives to you members of the Order your robes and food and lodging and necessaries for the sick? Who is it who enjoys such things when given? Who is it who lives a life of righteousness? Who is it who devotes himself to meditation? Who is it who attains to the goal of the Excellent Way, to the Nirvâna of Arahatship? And who is it who destroys living creatures? who is it who takes what is not his own? who is it who lives an evil life of worldly lusts, who speaks lies, who drinks strong drink, who (in a word) commits any one of the five sins which work out their bitter fruit even in this life 1? If that be so there is neither merit nor demerit; there is neither doer nor causer of good or evil deeds; there is neither fruit nor result of good or evil Karma. --If, most reverend Nâgasena, we are to think that were a man to kill you there would be no murder, then it follows that there are no real masters or teachers in your Order, and that your ordinations are void.--You tell me that your brethren in the Order are in the habit of addressing you as Nâgasena. Now what is that Nâgasena"....BOOK II.....LAKKHANA PAÑHA......THE DISTINGUISHING CHARACTERISTICS OF ETHICAL QUALITIES.......CHAPTER 1..........translated by T. W. Rhys Davids.

"Tibetan histories and works on Kala Chakrait may be conjectured that this S'ambhala, very probably, was the capital of the Bactrian Empire of the Eastern Greeks who had embraced Buddhism. It is also conjectured that the modern city of Balkh must have been the site of their latest capital. The name of King Menander {Minendra) who erected a very lofty chaiti/a (Castle) has been mentioned by the Kashmirian poet Ksomendra, in Avaddna Kalpalatd, a work that was finished in about 1035 A.D…."...https://archive.org/stream/grammaroftibetan00dass/grammaroftibetan00dass_djvu.txt 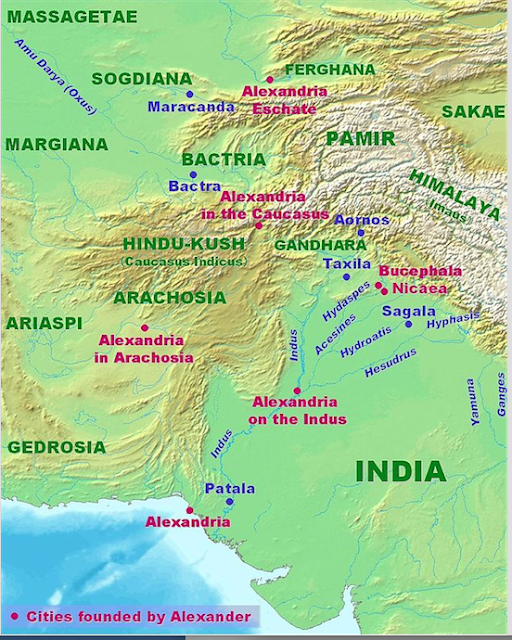 "Sagala or Sangala, the ancient Greek name for the modern city of Sialkot in present day Pakistan, was a city of located in northern Punjab, Pakistan. Sagala was known as Sakala to the natives of the Indian sub-continent during ancient times. Sagala (alias Sakala) is mentioned as the capital of the successor Greek kingdom when it was made the capital by King Menander I, son of Demetrius."

"Excerpt from: The Chariot exchange between the Venerable Nagasena and King Milinda: "In the land of the Bactrian Greeks, there was a city called Sagala...The Venerable Nagasena stayed at the Sankheyya hermitage together with 80,000 monks. King Milinda, accompanied by a retinue of 500 Greeks, went up to where he was, gave him a friendly and courteous greeting, and sat on one side.
"Then, ask as I may, I can discover no chariot at all. This "chariot" is just a mere sound. But what is the real chariot? Your Majesty has told a lie, has spoken a falsehood! There is really no chariot! Your Majesty is the greatest king in the whole of India. Of whom then are you afraid, that you do not speak the truth?" And he exclaimed: "Now listen, you 500 Greeks and 80,000 monks, this King Milinda tells me that he has come on a chariot. But when asked to explain to me what a chariot is, he cannot establish its existence. How can one possibly approve of that?"
The 500 Greeks thereupon applauded the Venerable Nagasena and said to King Milinda: "Now let You Majesty get out of that if you can!"
But King Milinda said to Nagasena: "I have not, Nagasena, spoken a falsehood. For it is in dependence on the pole, the axle, the wheels, the framework, the flag-staff, etc, there takes place this denomination "chariot", this designation, this conceptual term, a current appellation and a mere name."
"Your Majesty has spoken well about the chariot. It is just so with me. In dependence on the thirty-two parts of the body and the five Skandhas, there takes place this denomination "Nagasena", this designation, this conceptual term, a current appellation and a mere name. In ultimate realtiy, however, this person cannot be apprehended. And this has been said by our sister Vajira when she was face to face with the Lord Buddha:
"Where all constituent parts are present, the word "a chariot" is applied. So, likewise, where the skandhas are, the term a "being" commonly is used."
"It is wonderful, Nagasena, it is astonishing, Nagasena! Most brilliantly have these questions been answered! Were the Lord Buddha Himself here, He would approve what you have said. Well spoken, Nagasena! Well spoken!".....http://buddhanet.net/budsas

"Menander’s successors, Queen Agathocleia and Strato I Soter, continued to reign for at least 40 years after his death, but their lives saw the emergence of a new dynasty in western India, that of the Sakas (Scythians) and Yueh-Chih from central Asia, and the Greek Bactrian era came to an end."....http://www.buddhanet.net/pdf_file/milinda.pdf