"Niguma was a formidable mahasiddha, variously described as the sister or consort of Naropa who was once a gatekeeper of the famous Nalanda University. She founded the practice known as The Six Yogas of Niguma. She was born in 1025. She is also known as Vimalashri.....Niguma received the teachings that became known as the Nigu Chos-drug, or the Six Yogas of Niguma.....Once Niguma herself had reached enlightenment, she began to pass her knowledge on to others. Her most famous disciple was the Tibetan yogi and Bonpo Master Khyungpo Naljor, the only one to whom she imparted her most secret teachings. The Shangpa school, although officially founded by Khyungpo Naljor, is in reality based on this transmission from Niguma.....When Khyungpo Naljor arrived at Niguma's dwelling place, the charnel ground of Sosaling, she appeared to him as a dark brown dakini "dancing above him in the sky" and "adorned with ornaments of human bones"......Niguma: Great Yoginis of Tantric Buddhism......www.drukpa-nuns.org 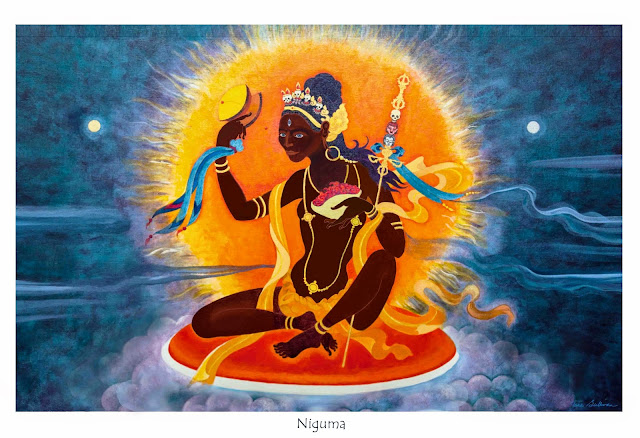 "The Dakini Niguma’s place of birth was the Kashmiri city called “Incomparable.” Her father was the brahman Santivarman (Tib.: Zhi ba’i go cha). Her mother was Shrımati (dPal gyi blo gros ma). Her real name was Srıjñ›na (dPal gyi ye shes)..... a reportedly historical woman such as Niguma,.... her birthplace is known to be in Kashmir, a hub of Buddhist activity, particularly of the tantric type, and probably in close quarters with the Shaivite tradition and other forms of esoteric Hinduism. The specific town, or perhaps monastery, is called Peme (dpe med) in Tibetan, meaning “without comparison,” translating Anupama.....Niguma’s family relationships are similarly slippery, particularly when it comes to her connection with Naropa (956-1040), her contemporary and a great adept whose teachings on the six dharmas learned from Tilopa spread widely in Tibet. The names of her parents given above by T›ran›tha are indeed the same as those of Naropa in his biography in the Kagyu Golden Rosary by Lhatsun Rinchen Namgyal and are similar in other biographies...... Naropa is sometimes said to be from Bengal in the east, but there is little evidence for this theory and most authors locate his birthplace in Kashmir, along with Niguma.....Naropa’s well-known hermitage of Pushpahari, or Pullahari, commonly identified as being on a hillock west of Bodhgaya, may have been in Kashmir....After attaining his first realization of mahāmudrā under Maitrıpa, Marpa returned to Nāropa. This time, Nāropa sent Marpa to receive teachings from Niguma, Wisdom (Jnāna) Dākinī Adorned with Bone ornaments. She was Nāropa’s wife before he renounced worldly life to enter the dharma, and later she became his student and consort. Finally, she became a great teacher herself and her lineage of teachings was taken to Tibet (though not by Marpa) and continues to this present day. Unfortunately, our story here does not tell us very much about their meeting (xliii).....both Marpa’s dakini and Khyungpo Naljor’s Niguma can sometimes both be found in the same great cemetery of Sosadvıpa (Tib. Sosaling), said to be just to the west of Bodhgaya.....the commonly-held belief that Niguma received the six dharmas from Naropa seems to be unsubstantiated......Tsadra Foundation

Sosaling Charnel Ground...... Sanskrit: Sosavipa....An Indian charnel ground where many great masters and siddhas practiced.....there is an holy ancient charnel ground called "sosaling"..... the Sosaling cremation ground to the west of Bodhgaya .... where Padmasambhava and others did their practice for a while......it`s one of the 8 holy charnel grounds.....The Cool Grove (Skt. Śītavana; Wyl. bsil ba’i tshal) in the east, situated near Bodhgaya, India....

Siddha Kyungpo Naljor (Born 1086 A.D.).....met also Maitrīpa, ....and asked: Is there any one who had met Vajradhāra? ....who replied: There is one named Niguma, the sister of Naropa. She has attained the Holy Stage, and transformed her body into that of rainbow, and made herself invisible by ordinary people. However she used to preside over Tantric feasts held by dakinis at the cemetery ground of the So sa island. Those who possess a pure mind might see her there. .....He went to the island of Sosa, and prayed Namo Buḍhaya. Then he saw in the sky at the height of seven tālas a ḍākinī of a dark brown complexion, adorned with ornaments made of bones, holding a mendicant staff and a kāpala in her hands, manifesting her various aspects and performing a dance. He recognized that she was Niguma, and saluted her requesting her to bestow on him the holy precepts. But she replied: I am a flesh eating dakini! Again he entreated, and she said: If you want to obtain Mantrayana precepts, gold is needed! He then offered her 500 srangs which she accepted and threw them into the forest. He began to doubt that she was a ḍākinī of the flesh eating class, and while he was thinking so, she gazed skywards, and then numerous ḍākinīs gathered, and she created a maṇḍala, and bestowed on him the initiation of the illusory body and the practice of dreams. ".........Blue Annals: Part 9 (Chapter 2, Niguma)

"Manjushrimitra: Jampel Shenyen......received a prophecy from Manjushri that if he sought enlightenment he should go to the Sitavana cremation ground near Bodhgaya. There he met Garab Dorje and during their seventy five years together he received the entire Dzogchen transmission. After Garab Dorje's parinirvana he divided the sixty-four hundred thousand Dzogchen verses into three series - Mind, Space and Secret Precepts - and the latter into oral and explanatory sections. He hid the main text of the oral section in a rock to the east of Bodhgaya and sealed it with the sign of crossed diamond scepters. He then went to the Sosaling cremation ground to the west of Bodhgaya, where he taught his disciple Shri Singha."....http://www.keithdowman.net

"In the Ngakpa and other Vajrayana lineages of Tibetan Buddhism, and in the Kapalika lineage of Shaivism, the tradition of traveling to India’s Eight Great Charnel Grounds for meditation goes back perhaps thousands of years. The theory is that by going to these Charnel Grounds and meditating on death and impermanence one may overcome the attachments of this life. "....http://blausternschlonge.wordpress.com

"....Niguma bestows on him numerous tantric initiations and teachings {R731}. {Kapstein in his article “Illusion of Spiritual Progress” (1992): 195-96 translates from the biography of Khyungpo Neljor where this event happens on a charnel ground of Sosadvipa. "(EP)......Summary of Blue Annals Chapter 9: The Chapter on Ko-brag-pa and Ni-gu from the Tibetan Renaissance Seminar by Elena Pakhoutova, modified by Dan Haig 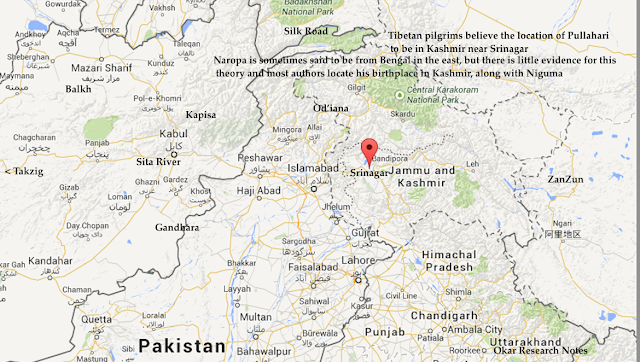 " .....in his translation of the Blue Annals, George Roerich notes that modern Tibetan pilgrims believe the location of Pullahari to be in Kashmir near Srinagar (400). And more interestingly, the colophon to Tilopa’s Esoteric Instructions on the Six Yogas (Chos drug gi man ngag) states that it was translated by Naropa and Marpa in Pulihpahari in the place of the Moslems (kha che’i gnas), again referring to Kashmir (Toh. 2330, f. 271a2-3)."....Tsadra Foundation......Tsadra Foundation envisions a flourishing community of Western scholar-practitioners who are fully trained in the traditions of Tibetan Buddhism ...The Foundation takes its name from Tsa’dra Rinchen Drak, Jamgön Kongtrul’s hermitage and principal seat in Eastern Tibet. ....

"Shri Singha was born into a good family in Sokhyam somewhere in Chinese Central Asia. In his youth he studied with the Acharya Haribhala and after three years he was an accomplished scholar. Then the Bodhisattva Avalokitesvara appeared to him, and advised him that if he really wanted to attain Buddhahood he should go to the Sosaling cremation ground in India. ".....http://www.keithdowman.net

"Nyima Özer travelled widely, performing crazy wisdom activities while visiting the eight great charnel grounds....as it is historically recounted, when he left the kingdom of Oddiyana, he went to a famous cemetery known as Chilly Grove and practiced meditation there for five years."...http://tibetanaltar.blogspot.com

The Melody of Wisdom: A Supplication to the Wisdom Dakini Niguma.....by Jamgon Kongtrul
Dark-brown woman wearing bone ornaments who flies through space,
You were born in the wonderful land of Kashmir, In a sublime city Known as Incomparable in the Land of Jambu,
....Complete text @...http://sukhasiddhi.org/about/lineage/niguma-story/

"The earliest biographies of Naropa, such as that of Gampopa (1079-1153) and Lama Zhang (1123-1193), do not name a specific birthplace other than simply “the west.” All accounts of Naropa include the story of a dakinı appearing to him and telling him to “go east” to find his guru Tilopa, which really only makes sense if he is somewhere in the west. In The Life Story of the Supreme Learned N›ro Pa˚chen, which claims to have compared five different biographies, Sangye Bum gives his birthplace as the “land of Moslems” (kha che’i yul), almost universally interpreted to mean Kashmir (88). (Recall that Moslems gained control of Kashmir in the 14th century). In case this is not clear, Karmapa Rangjung Dorje (1284-1339) specifies “ka smi ra”, transcribing the Indian “Kashmir” as nearly as is possible in Tibetan in his version of the life story (f. 26a2). Kachö Wangpo (1350-1405) is even more specific, saying: “In the east of India, the town of Jammu (‘Dzam bu) in Srinagar (Sri na ga ra), a district of Bha ga la.” Srinagar and Jammu are easily identified in the south-eastern part of the Kashmir valley, but “bhagala” is not so clear. The biography by Lhatsun Rinchen Namgyal (1473-1557), which was translated by Herbert Guenther in The Life and Teaching of Naropa, is a verbatim copy of Kachö Wangpo’s, a very common practice in Tibetan literature where plagiarism is truly the highest form of flattery. Dorje Dze-ö ‘s biography of Naropa, translated by Khenpo Könchog Gyaltsen in The Great Kagyu Masters, has the same information. It seems that it is only in the inexplicable identification of the Tibetan transliteration “Bha-ga-la” as “Bengal” in these two translations (despite the obvious reference to Srinigar and Jammu) that Naropa has been widely viewed in the western world as Bengali. But later Tibetan authors such as Taranatha have upheld Kashmir as his birthplace. One last twist to this research is that Sangye Bum’s description of “the land of Moslems”, identical to the one in Niguma’s life story, adds that it is also called “Kosala”! (89; f. 2a6) This ancient kingdom where the Buddha Shakyamuni spent most of his teaching life is nowhere near Kashmir or Bengal, but somewhere in the middle. This seems to come out of nowhere and I have no explanation for it. On Naropa’s birthplace see also Templeman, The Seven Instruction Lineages, 46 and 115, n.157.".....Tsadra Foundation