"Lalitaditya-Muktapida of Karakota dynasty who ruled Kashmir from 724 to 760 AD...... Karakota dynasty had come to rule Kashmir after Baladitya, the last King of the Gonanda race passed away. Durlabhavardhana was Baladitya’s son in law and after his death was established on the throne of Kashmir. He was followed by his son Partapaditya-II who had three sons, Candrapida, Tarapida, and Muktapida, also known as Vajraditya, Udayaditya, and Lalitaditya..... Candrapida and Tarapida ruled for 8 years and 4 years respectively. Lalitaditya-Muktapida was the youngest son of Partapaditya-II and followed Tarapida........ His both brothers are supposed to have succumbed to magic and witch craft which they had initiated against each other. The superstitious belief in the efficiency of magic rites forms an ancient feature of Kashmiri character and even at present there are many sorcerers (Jinn Pir) reputed to be engaged in such practices and quite a large number of people visit them..... 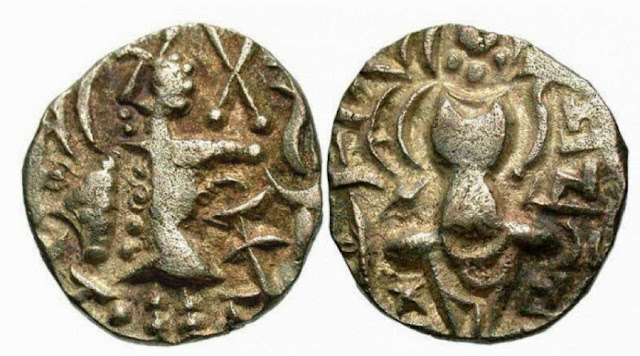 Kalhana describes Lalitaditya as a very strong ruler, who asserted his power far beyond Kashmir and the adjacent territories. He is represented as a great conqueror, whose reign was mostly passed in expeditions abroad. The numerous foreign expeditions of Lalitaditya and his ultimate disappearance on one of these forays towards north reminds one of the Greek Conqueror, Alexander the Great who was of a similar disposition and in that respect Lalitaditya may be called Kashmir’s Alexander.".....http://www.kashmirfirst.com/articles/history/070516_lalitaditya_muktapida.htm

"According to Rajatarangini of Kalhana, king Lalitaditya Muktapida of Kashmir leads a war expedition against the tribes of north (i.e. north of Kashmir) and in sequence, encounters the Kambojas, Tusharas, Bhauttas, Daradas, Valukambudhis, Uttarakurus, Strirajya (mythical or otherwise) and Pragjyotisha with whom he fights one after the other......Rajatarangini places Uttarkuru land in the neighborhood of Strirajya. Based on Yuan Chwang's evidence, Strirajya is identified as a country lying north of Kashmir, south of Khotan and west of Tibet....Kalhana (sometimes spelled Kalhan or Kalhan'a) (c. 12th century), a Kashmiri, was the author of Rajatarangini (Chronicle of Kings), an account of the history of Kashmir. He wrote the work in Sanskrit between 1148 and 1149 AD " 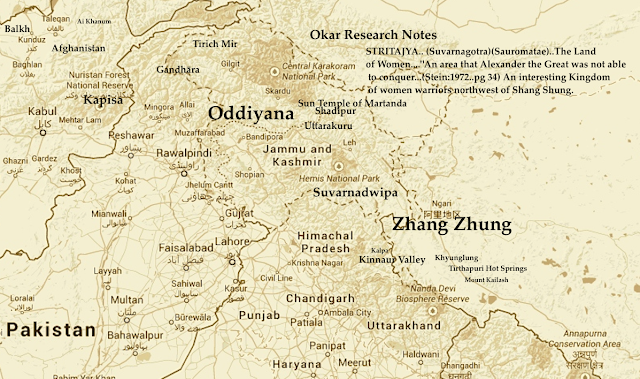 "The descriptions of King Lalitaditya's foreign expeditions have a mixture of historical and legendary details. His first enterprise was directed against Yasovarman, the ruler of Kanyakubja or Kanauj. After the defeat of Yasovarman, the King is supposed to have triumphantly marched from Orissa to Kathiawar and Kambojas (Afghanistan) in the west. However, the absence of any historical details and the strict geographical order of countries named suggest that these conquests have been more or less of a legendary nature. There is no doubt that all the neighbouring territories such as Kangra and Punch were his feudatories. After defeating Yasovarman, Lalitaditya is supposed to have invaded and subdued Tukharas, a nation in the northern region. The country of Tukharas is undoubtedly the Tokharistan of the Muslim period comprising Badakhshan and the tracts on the Upper Oxus. It is also stated that there were S’ahi princes in the court of Lalitaditya. These were definitely belonging to a family of Turkish origin ruling Kabul Valley and Gandhara."
"The famous Chinese pilgrim to Kashmir, Ou-k’ong (Sun Wukong, w/ Xuanzang...632 AD) mentions that there were close relations between contemporary Kashmir and Turkish tribes. Turkish prince Cankuna was in the court of Lalitaditya. Alberuni also mentions that Kashmiris of his time used to celebrate annually on a certain day a festival to commemorate the victory which their King Muktapida had won over Turks.

"Next in the list of conquests come the Bhauttas or the Tibetans. There is lot of historical evidence to support this claim of campaigns against Tibetans. The Annals of Tang dynasty of China know Lalitaditya-Muktapida under the name of Mu-to-pi, as the King of Kashmir who sent an embassy to the Chinese court during the reign of Emperor Hiuen-tsung (AD 713-755). The main purpose of the embassy had been to seek alliance of the Chinese rulers against Tibet. Ambassador U-li-to whom Mu-to-pi had sent to the imperial court distinctly claimed for his master repeated victories over Tibetans. The auxiliary Chinese force of two hundred thousand men which the Kashmir King invited to his country and for which he proposed to establish a camp on the shores of Mahapadma or Volur Lake, was meant for further operations against the common foe. There is evidence that the Tibetans had established a powerful empire at that time and had threatened both Kashmir as well as China. As there is no evidence of any Bhautta invasion of Kashmir, one must assume that Lalitaditya’s expeditions towards north were real and lasting and checked the Tibetan march towards Kashmir. Lalitaditya had also subdued Kashmir’s immediate northern neighbours, the Dards. The Dard tribes have from very early times to the present day inhabited the mountain territories immediately adjoining Kashmir to the north and north-west. The very safety of the valley has many times necessitated expeditions against these areas."....http://www.kashmirfirst.com/articles/history/070516_lalitaditya_muktapida.htm

"Lalitaditya had been a builder of renown. Numerous shrines and sacred images were erected during his time. The ruins of the splendid Sun Temple of Martanda are still the most striking object of ancient architecture in the Valley.....Kalhana mentions about the town of Martanda near the Temple which was swelling with grapes. There is no trace of the town now." 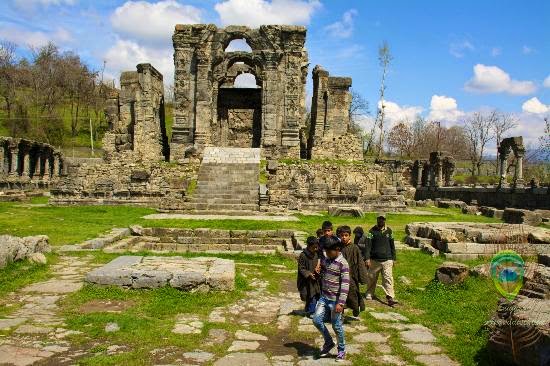 "Lalitaditya & the ruins of Parihaspura which he built as his new capital. The plateau where Lalitaditya built his capital is now known as Parspor Udar. It rises south-east of Shadipur between the marshes of Panznor and Hartrath. Its length is about two miles and width is about a mile. There are ruins of numerous temples, vihara, and other structures here......" 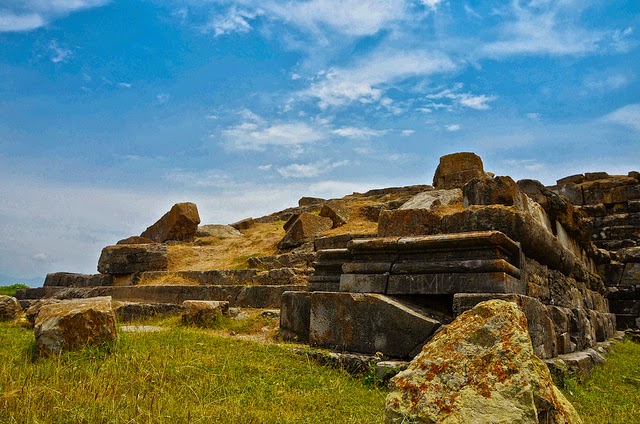 "Lalitaditya had very much patronised Buddhism during his reign. Ou-kong mentions existence of many Stupas and Viharas which he saw during his visit. These were by the side of numerous Visnu shrines erected by him. The greatest Buddhist gift of the King was a great Vihara at Parihaspura with a colossal Buddha image which still existed in Kalhana’s time. There was another Vihara at Huskapura where Ou-kong stayed on his arrival in Kashmir."

"Llitaditya’s end is also surrounded in mystery. There are many theories about his death but all point towards the fact that it occurred during his expedition in the northern region. According to one version he perished “through excessive snow in a country called Aryanka”, which has not been exactly located. Some versions state that he retired along with his army to the world of immortals in the north. However, from all these accounts it may be concluded that Lalitaditya, the Alexander of Kashmir died on one of his conquering expeditions in the northern region. The maxims of policy which the King had set forth influenced Kashmir administration for a long time. Thus this very illustrious King of Kashmir had a tragic end similar to Alexander the great who also died on way back to Greece after his long trail of conquests."

"Aryanka....people supposed to have lived in prehistoric times, in Central Asia, east of the Caspian Sea, and north of the Hindu Kush and Paropamisan Mountains, one of that ethnological division of mankind called Indo-European [1913 Websters Dictionary]

"Sun Wukong, also known as the Monkey King, is a main character in the Chinese classical novel Journey to the West. Sun Wukong is also found in many later stories and adaptations. In the novel, he is a monkey born from a stone who acquires supernatural powers through Taoist practices. After rebelling against heaven and being imprisoned under a mountain by the Buddha, he later accompanies the monk Xuanzang on a journey to retrieve Buddhist sutras from India....They left Chang’an by stealth in 629. On his journey he traveled north of the Takla Makan Desert, passing through such oasis centres as Turfan, Karashar, Kucha, Tashkent, and Samarkand, then beyond the Iron Gates into Bactria, across the Hindu Kush (mountains) into Kapisha, Gandhara, and Kashmir. From there he sailed down the Ganges River to Mathura, then on to the the eastern reaches of the Ganges, where he arrived in 633."

"Within Islam, the term Jinns, are used to describe what are commonly known as evil spirits. There are some that can be good as well, but most often are referred to as evil when discussing them....The term encompasses a wide variety of possible forms jinns can take on, including human, animal, trees, anything they like. It is understood that they have free will, like that of humans, and therefore will also be held accountable for their actions. They can choose to obey or disobey God, like humans can..... these evil demons are typically invisible and are said to be of lesser status than angels. They are also said to be either Muslim or non-Musilm. Islamic text identifies their place of origin from the smokeless fire. "Indeed We created man from dried clay of black smooth mud. And We created the Jinn before that from the smokeless flame of fire" [Surah Al-Hijr 15:26-27]......Going to a Pir/Baba or to a mulla/fakir/sufi/scholar etc.....Pir or Peer is a title for a Sufi master."

"Kalhana’s ‘Rajtarangini’ written in the 11th century is the earliest record available in the history of Kashmir. According to Kalhana, Gonanda I came to the throne of Kashmir about 2448 BC. His descendants ruled for many centuries. King Ashoka conquered Kashmir in 250 BC and made Srinagar the capital if his empire......1st century AD saw the arrival of Kushan dynasty. Emperor Kanishka organized the 3rd great council of Buddhist at Harwan. From the Karakota dynasty, the great ruler Lalitaditya Muktapida is mentioned as ruler in 8th century. The 9th century witnessed the rule of Utpal dynasty that produced the great ruler Avanti Verman during whose reign Avantipur was the capital. In the 10th century, the Lohara dynasty ruled in Kashmir. 11th century saw the rule of King Harsha, a poet and lover of art & music. 12th century witnessed the rule of King Jaisimha. In the 13th century, Kashmir witnessed upheavals, mutual quarrels and civil wars that weakened the Hindu rule.".....

subhrashis adhikari has left a new comment on your post "King Lalitaditya Muktapida of Kashmir....
Hi,....The google map of Lalitaditya was created by me. Please provide proper reference. Thank You. The same has been published in my book 'The Journey of Survivors'. Regards, Subhrashis.
Posted by subhrashis adhikari to Shams-i-bala and The Historical Shambhala Kingdom at October 18, 2016