The significance of the term Asha is complex, with a highly nuanced range of meaning. It is commonly summarized in accord with its contextual implications of 'truth' and 'right(eousness)', 'order' and 'right working'.......http://en.wikipedia.org/wiki/Asha

"Asha defined: The first among Gathic concepts (enumerated earlier) is ASHA. It is an Aryan concept, shared by Hindus, as well as by Persians. In archaic Sanskrit, it is Rta/Rita, and the Law of the Universe. In both Sanskrit and Gathic Avestan, it literally means "what fits", in any and every situation; in every physical, emotional, ethical, mental, material and/or spiritual relationship....Asha is the Ordering Principle of the Universe."......http://www.zoroastrianism.cc/asha.html 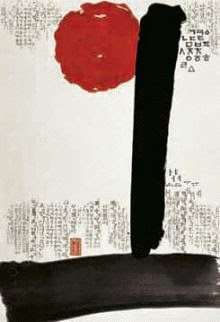 "Ashe..... the mark Chogyam Trungpa used in the Shambhala teachings to symbolize primordial wisdom, which he called the Ashe stroke." ......http://www.shambhalasun.com/index.php?option=content&task=view&id=3423

"Ashe (Tibetan: primordial or first stroke. Pronounced ah-shay). In the Shambhala teachings, A-, primordial or first, is the open space of mind before the first thought, or first gesture; that first thought or gesture is -she. Ashe is the power to express basic goodness and is also know as "the essence of life." Ashe symbolizes primordial confidence and compassion. The execution of the stroke of Ashe is the practice that expressed and nourishes those qualities."......Jeremy Hayward, 'Warrior - King of shambhala - Remembering Chogyam Trungpa. - Wisdom Publications, 2008

"Asha is not Karma. Karma is a mechanical retribution for actions. Asha is an aspect of the Nature of God and works to promote Haurvatat. Thus Asha has no such thing as the concept of 'Karmic Debt" which is totally foreign to Zarathushtra's teaching of free will....Asha (aša) is the Avestan language term (corresponding to Vedic language ṛta) for a concept of cardinal importance to Zoroastrian theology and doctrine. In the moral sphere, aša/arta represents what has been called "the decisive confessional concept of Zoroastrianism." The opposite of Avestan aša is druj, "lie."....http://en.wikipedia.org/wiki/Asha

"Etymology....... Avestan aša and its Vedic equivalent ṛtá both derive from Proto-Indo-Iranian *ṛtá- "truth", which in turn continues Proto-Indo-European *h2r-to- "properly joined, right, true", from the root *h2ar. The word is attested in Old Persian as arta.

Asha...."The word is also the proper name of the divinity Asha, the Amesha Spenta that is the hypostasis or "genius" of "Truth" or "Righteousness". In the Younger Avesta, this figure is more commonly referred to as Asha Vahishta (Aša Vahišta, Arta Vahišta), "Best Truth".

"The Middle Persian descendant is Ashawahist or Ardwahisht; New Persian Ardibehesht or Ordibehesht. In the Gathas, the oldest texts of Zoroastrianism and thought to have been composed by the prophet himself, it is seldom possible to distinguish between moral principle and the divinity. Later texts consistently use the 'Best' epithet when speaking of the Amesha Spenta, only once in the Gathas is 'best' an adjective of aša/arta."

"Vedic usage.......The kinship between Old Iranian aša-/arta- and Vedic ŗtá- is evident in numerous formulaic phrases and expressions that appear in both the Avesta and in the RigVeda. For instance, the *ŗtásya path-, "path of truth", is attested multiple times in both sources. (e.g. Y 51.13, 72.11; RV 3.12.7, 7.66.3). Similarly "source of truth," Avestan aša khá and Vedic khâm ṛtásya (Y 10.4; RV 2.28.5)......The adjective corresponding to Avestan aša/arta- "truth" is haiθiia- "true". Similarly, the adjective corresponding to Vedic ŗtá- "truth" is sátya- "true". The opposite of both aša/arta- and haithya- is druj- "lie" or "false". In contrast, in the Vedas the opposite of both ŗtá- and sátya- is druj- and ánŗta-, also "lie" or "false".......However, while the Indo-Iranian concept of truth is attested throughout Zoroastrian tradition, ŗtá- disappears in post-Vedic literature and is not preserved in post-Vedic texts. On the other hand, sátya- and ánrta- both survive in classical Sanskrit........The main theme of the Rig Veda - "the truth and the gods" - is not evident in the Gathas. Thematic parallels between aša/arta and ŗtá- do however exist, for instance in Yasht 10, the Avestan hymn to Mithra: there, Mithra, who is the hypostasis and preserver of covenant, is the protector of aša/arta. RigVedic Mitra is likewise preserver of ŗtá-."....Schlerath, Bernfried (1987), "Aša: Avestan Aša", Encyclopaedia Iranica 2, New York: Routledge & Kegan Paul: 694-696

"Asha is primarily Truth and Order and Righteousness......Truth is not in the sense of not lying, not that we encourage lying, but its more in the sense of Reality, as opposed to lllusion. Order is in the sense of harmony and concert. It carries a secondary, but strong meaning of artistry, balance, beauty and precision...Asha can also be understood in terms of other religious concepts. It is somewhat like the Tao, in that it rules and sustains the Cosmos, and it includes a Law of the Mean, which tends to balance things out. It is like Karma, in the sense that it includes a law of just returns. It is also, like Dharma, the way of right actions..".....http://www.zoroastrianism.cc/asha.html

"The chant to raise wind-horse, which represents a connection between earth and sky, and its manifestation in a person...
KI KI SO SO ASHE LHA GYAL LO TAK SENG KHYUNG DRUK DYAR KYE!
by Chögyam Trungpa Rinpoche from our Teaching Library ...... http://www.shambhala.org/teachings

"Shah......Šâh ...... (/ˈʃɑː/; Persian: شاه‎, [ʃɒːh], "king") is a title given to the emperors/kings and lords of Iran a.k.a. Persia. In Iran (Persia and Greater Persia) the title was continuously used; rather than King in the European sense, each Persian ruler regarded himself as the Šâhanšâh (King of Kings) or Emperor of the Persian Empire. In Pakistan and India, the title was used by Mughal rulers. The word descends from Old Persian Xšâyathiya "king", and is derived from the same root as Avestan xšaΘra-, "power" and "command", corresponding to Sanskrit (Old Indic) kṣatra- (same meaning), from which kṣatriya-, "warrior", is derived. The full, Old Persian title of the Achaemenid rulers of the First Persian Empire was Xšâyathiya Xšâyathiyânâm or Šâhe Šâhân, "King of Kings" or "Emperor".....The word "shah" was first used during the Achaemenid Empire (550-330 B.C.).....http://en.wikipedia.org/wiki/Shah

"Through a beautiful Persian legend, handed down through the ages as the tales of the 10th.century Persian poet Firdausi .... the ancient Art of Asha is linked with what we know as chess today, referred to throughout history as "the game of kings and the king of games." But while today's chess is only a game, the ancient Art of Asha is not a game; it is a profoundly complex and intricately-woven microcosm within the macrocosm of Life- a complete universe within itself....The word chess derives from the Persian "Shah," meaning King, which originally was "Asha," the Cosmic Order. ....Chess was introduced to Persia from India and became a part of the princely or courtly education of Persian nobility. In Sassanid Persia around 600 the name became chatrang, which subsequently evolved to shatranj, due to Arab Muslims' lack of ch and ng native sounds, and the rules were developed further. Players started calling "Shāh!" (Persian for "King!") when attacking the opponent's king, and "Shāh Māt!" (Persian for "the king is helpless" – see checkmate) when the king was attacked and could not escape from attack.".... Murray, H. J. R. (1913). A History of Chess. Oxford University Press.