Nāgārjuna (Devanagari: नागार्जुन, Telugu: నాగార్జున, Tibetan: ཀླུ་སྒྲུབ་ klu sgrub, Chinese: 龍樹, Japanese: 龍樹 Ryūju, Sinhala නාගර්ජුන) (ca. 150–250 AD) is widely considered one of the most important Buddhist philosophers after the historical Buddha. Along with his disciple Āryadeva, he is considered to be the founder of the Madhyamaka school of Mahāyāna Buddhism. Nāgārjuna is also credited with developing the philosophy of the Prajñāpāramitā Sūtras and, in some sources, with having revealed these scriptures in the world, having recovered them from the nāgas (dragons). Furthermore, he is traditionally supposed to have written several treatises on rasayana alchemy as well as serving a term as the head of Nālandā University…..Very little is reliably known of the life of Nāgārjuna, since the surviving accounts were written in Chinese and Tibetan, centuries after his death…The only work that all scholars agree is Nagarjuna's is the Mūlamadhyamakakārikā (Fundamental Verses on the Middle Way), which contains the essentials of his thought in twenty-seven chapters……

The Kushan Empire (Sanskrit: कुषाण राजवंश, Kuṣāṇ Rājavaṃśa; BHS: Guṣāṇa-vaṃśa; Parthian: Kušanxšaθr) was an empire in South Asia originally formed in the early 1st century CE under Kujula Kadphises in the territories of ancient Bactria around the Oxus River (Amu Darya), and later based near Kabul, Afghanistan. The Kushans spread from the Kabul River Valley to defeat other Central Asian tribes that had previously conquered parts of the northern central Iranian Plateau once ruled by the Parthians, and reached their peak under the Buddhist emperor Kanishka (127–151), whose realm stretched from Turfan in the Tarim Basin to Pataliputra on the Gangetic Plain." 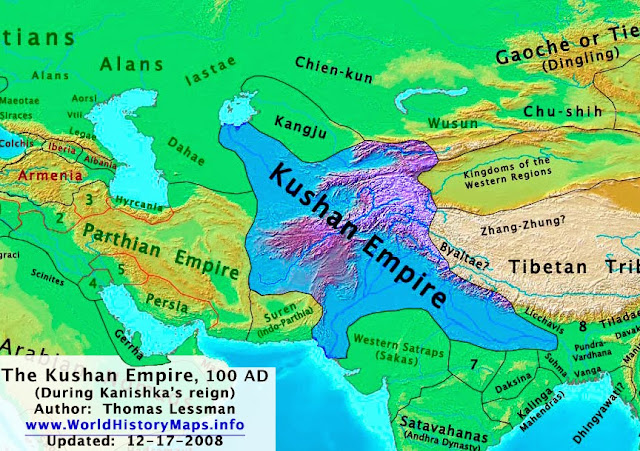 
Aryadeva (Skt. Āryadeva; Tib. འཕགས་པ་ལྷ་, Pakpa Lha; Wyl. ‘phags pa lha) (second/third century) — one of the six great commentators (the ‘Six Ornaments’) on the Buddha's teachings. He was a disciple of Nagarjuna and devoted his life to continuing his master’s work, consolidating the Madhyamika tradition. He is also counted among the eighty-four mahasiddhas….. two centuries after Nagarjuna, during the transition period from Kushan to Gupta….

Huvishka (ca. 160 – ca. 190)…..(Kushan: Οοηϸκι, "Ooishki") was a Kushan emperor from about 20 years after the death of Kanishka (assumed on the best evidence available to be in 140 AD) until the succession of Vasudeva I about thirty years later. His rule was a period of retrenchment and consolidation for the Empire. In particular he devoted time and effort early in his reign to the exertion of greater control over the city of Mathura.

Vasudeva I (ca. 190 – ca. 230)….. (Kushan: Βαζοδηο "Bazodeo", Chinese: 波調 "Bodiao") was the last of the "Great Kushans." Named inscriptions dating from year 64 to 98 of Kanishka’s era suggest his reign extended from at least 191 to 225 CE. He was the last great Kushan emperor, and the end of his rule coincides with the invasion of the Sassanids as far as northwestern India, and the establishment of the Indo-Sassanids or Kushanshahs from around 240 CE. 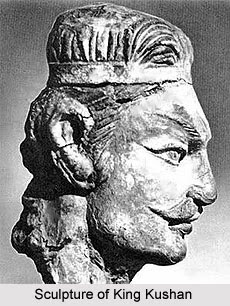 "Nagarjuna’s writings had relatively little effect on the course of subsequent Indian Buddhist philosophy. Despite his apparent attempts to discredit some of the most fundamental concepts of abhidharma, abhidharma continued to ﬂourish for centuries, without any appreciable attempt on the part of abhidharmikas to defend their methods of analysis against Nagarjuna’s criticisms"……Hayes, Richard P. Nagarjuna: Master of Paradox, Mystic or Perpetrator of Fallacies?, 2003

"….Nagarjuna, the great nihilist of Buddhist philosophy. Almost nothing is known of Nagarjuna. He was born sometime towards the end of the second century AD and probably published his most important work the Muladhyamakakarika about 200 to 250 AD. Where he lived, and exactly when are unknown, though he may have had some contact or perhaps even lived for a time in the Kushan Empire. His importance lies in the fact that his work was co-opted by the Mahayana movement of later centuries. Mahayana was a minority in the Kushan Empire but many of the texts which later came to be seen as foundational were published in this period."…..Joseph Walser…. 'Nāgārjuna in Context: Mahāyāna Buddhism & Early Indian Culture' (CU Press, 2005)……….http://www.cbs.columbia.edu/weblog/2006/10/to_publish_or_p.html

"The Kushans had their dominions on both sides of the Hindu Kush i.e., extending up to and including parts of Turkistan in the north-west, embracing the whole of modern Afghanistan, and in the east the entire of Pakistan and major portion of northern India. The greatest ruler of the dynasty, Kanishka, had adopted Buddhism and it was during his period that both Buddhist religion and Greek art reached their zenith which is known under the nomenclature of Gandhara Civilization. It was again during his regime and because of his efforts that Buddhism spread in Central Asia and China. This period is regarded as the most important in the history of Buddhism….The budding and blossoming of Gandhara art was not a new phenomena in Pakistan's history as this land had given birth to several such brilliant civilizations…. "When the great monarch Kanishka actively espoused the cause of Buddhism and essayed to play the part of a second Ashoka, the devotion of the adherents of the favoured creed received an impulse which speedily resulted in the copious production of artistic creations of no small merit. "In literature the memory of Kanishka is associated with the names of the eminent Buddhist writers Nagarjuna, Asvaghosha and Vasumitra. Asvaghosha is described as having been a poet, musician, scholar, religious controversialist and zealous Buddhist monk. Charaka, the most celebrated of the early Indian authors treating of medical science, is reputed to have been the court physician of Kanishka. "Architecture, with its subsidiary art of sculpture, enjoyed the liberal patronage of Kanishka, who was like Ashoka a great builder. The tower at Peshawar built over the relics of Buddha and chiefly constructed of timber stood 400 feet high. The Sirsukh section of Taxila hides the ruins of the city built by Kanishka."….http://www.kushan.org/general/other/part1.htm

"Buddhism has a long history in the Pakistan region — over time being part of areas within Bactria, the Indo-Greek Kingdom, the Kushan Empire, Ancient India with the Maurya Empire of Ashoka, the Punjab region, and Indus River Valley cultures — areas now within the present day nation of Pakistan. Buddhist scholar Kumāralabdha (童受) of Taxila was comparable to Aryadeva, Aśvaghoṣa and Nagarjuna. Currently there is a small community of at least 1,500 Pakistani Buddhist in the country….The majority of people in Gandhara, present day Southern Khyber Pakhtunkhwa province, were Buddhist. Gandhara was largely Mahayana Buddhist, but also a stronghold of Vajrayana Buddhism. The Swat Valley, known in antiquity as Uddiyana, was a kingdom tributary to Gandhara. There are many archaeological sites from the Buddhist era in Swat….The Buddhist sage Padmasambhava is said to have been born in a village near the present day town of Chakdara in Lower Dir District, which was then a part of Oddiyana. Padmasambhava is known as Guru Rinpoche in Tibetan and it is he who introduced Vajrayana Buddhism in Tibet."….http://en.wikipedia.org/wiki/Buddhism_in_Pakistan 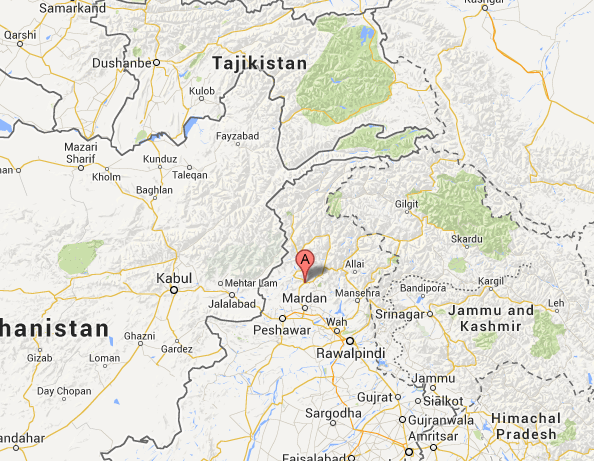 The Religious Traditions of Asia: Religion, History, and Culture……dited by Joseph Kitagawa