Greater Caucasus (Russian: Большой Кавказ; Azerbaijani: Böyük Qafqaz; Georgian: დიდი კავკასიონი), sometimes translated as "Caucasus Major", "Big Caucasus" or "Large Caucasus") is the major mountain range of the Caucasus Mountains…..It stretches for about 1,200 kilometres (750 mi) from west-northwest to east-southeast, between the Taman Peninsula of the Black Sea to the Absheron Peninsula of the Caspian Sea: from the Western Caucasus in the vicinity of Sochi on the northeastern shore of the Black Sea and reaching nearly to Baku on the Caspian. 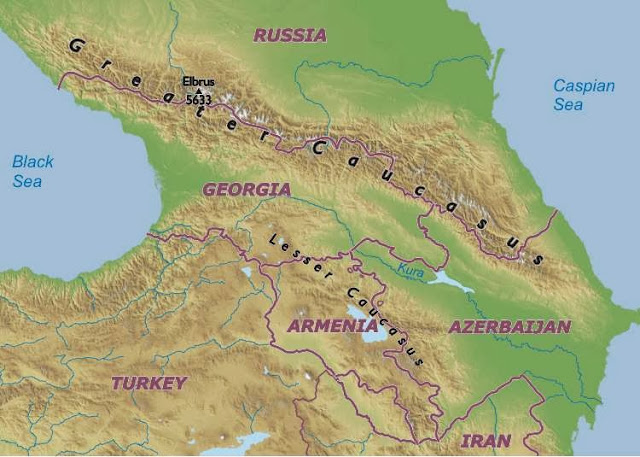 "The Bactria–Margiana Archaeological Complex (or BMAC, also known as the Oxus civilization) is the modern archaeological designation for a Bronze Age civilisation of Central Asia, dated to ca. 2300–1700 BCE, , centered on the upper Amu Darya (Oxus River). ...Deh Morasi Gundai was eventually abandoned about 1500 BC, perhaps because of the westward shift of the river on which it was built. Mundigak continued another 500 years. Two successive invasions by a nomadic tribe from the north forced the inhabitants to abandon the city after more than 2,000 years of continuous occupation……"...http://en.wikipedia.org/wiki/Bactria–Margiana_Archaeological_Complex

Mount Elbrus…. is a dormant volcano located in the western Caucasus mountain range….Mt. Elbrus's peak is the highest in the Caucasus and also the highest mountain in all of Europe, or the highest in western Asia, narrowly exceeding (by 32 meters/106 feet) another volcano, Mount Damavand in the Alborz range in Iran.

"Early settlements included the Scythians in the 9th century BC…..Like the Black Sea Scythians, the Saka identified gold with the sun, fire, supreme power and eternal life. The Saka tribes also worshipped the sword and had other sacred artifacts. The Roman historian, Quintus Curtius Rufus retells the legend about the Saka in which they, just like the Scythians from the Dnipro region, had magical gifts from heaven: a plough and a yoke for farmers; a spear and an arrow for soldiers; and a sacrificial cup for priests…..This suggests a division of the Saka society into three groups: warriors (the ancient Indo-Iranian name for warriors, “rataishtar” – “those who stand in a chariot”), priests with their characteristic sacrificial cup and specific headgear and communal farmers, or the “eight-legged”, i.e., those who had two oxen that could be yoked to a plough. Each caste had its own traditional colours: red and golden-red for warriors, white for priests and blue and yellow for farmers….a Saka tsar would plough the first furrow in spring and would be raised by a shepherd, which showed his connection to the people. A Basileus was a member of the military caste and, at the same time, was considered to be chosen by the gods, a mediator between heaven and earth, the centre of the Universe and the carrier of earthly prosperity. The welfare of the people depended on his physical strength and spiritual energy. He was the embodiment of all societal strata. Saka women enjoyed equal rights with men, and the names of their warrior queens, Tomyris and Zarina, have been preserved though the ages."….http://ukrainianweek.com/History/60165 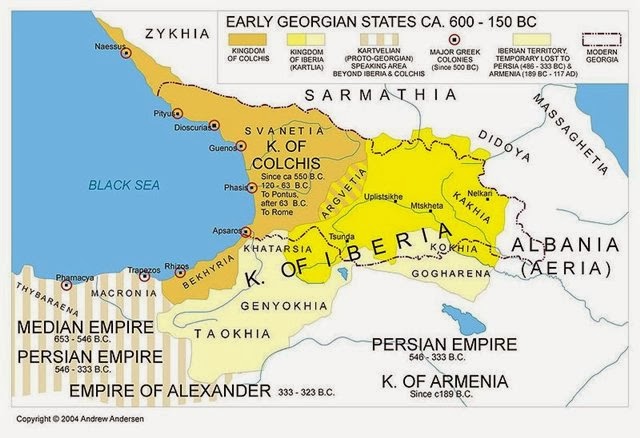 Caucasus Indicus, an ancient name for Hindu Kush …In the time of Alexander the Great, the Hindu Kush range was referred to as the Caucasus Indicus or the "Indian Caucasus" (as opposed to the Greater Caucasus range between the Caspian and Black Seas),….A mountain range of southwest Asia extending more than 805 km (500 mi) westward from northern Pakistan to northeast Afghanistan. It is crossed by several high-altitude passes used as invasion and trade routes since ancient times. The highest elevation is Tirich Mir, 7,695.2 m (25,230 ft), in Pakistan.

List of sacred mountains according to local legends:
Mount Babadagh - Babadagh (Grandfather Mountain) is the fourth highest peak in the Caucasus in Azerbaijan at 3,629 meters. It is located north of Ismayilli. At the top is a "pir" (sacred place) dedicated to Hasrat Baba, a person recered as a holy man, who is believed to have lived during the period when the area was known as Caucasian Albania.
Mountain Avey - Avey Mountain is one of the peaks and a white-greyish ridge in the Small Caucasus Mountains located between Georgia and Gazakh district. It is 12 km away from the village of Dash Salahli. Avey means "house of the moon".
Mount Goyazan - is a mountain in northwestern Qazakh Rayon of Azerbaijan. According to ancient local beliefs mountain named because of its loneliness and being directed to sky. Goyazan means "Skycrusher".
Khinalug - is a mountain where Khinalig people live. Before Islam they were pagan and worshipping "their own fire god". 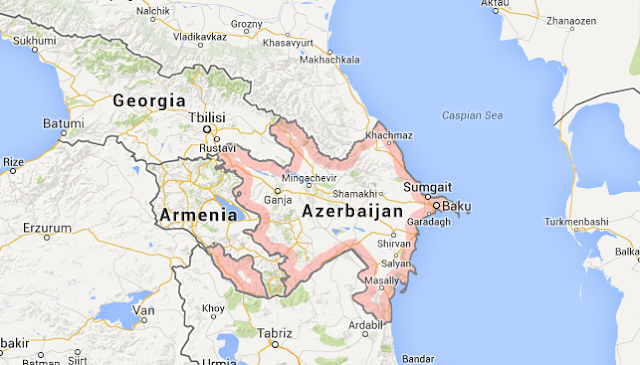 Neo-Paganism—One More Paradox of Globalization…..The 2,000th anniversary of Christianity is challenged by a paradoxical phenomenon—the revival of paganism. Significantly, this involves mainly urbanized literate people who have long ago lost their links with traditional peasant culture, commonly considered the last fortress of pre-Christian beliefs. The Neo-Pagan movement has been developing in the West for several decades and has recently begun to conquer the post-Soviet lands…… Neo-Pagans are doing their best to restore pre-Christian belief systems….