"Gonur Tepe is an archaeological site of about 55 hectares in Turkmenistan that was inhabited by Indo-Iranian peoples until sometime in the 2nd millennium BCE dating back to 2500 BCE. It's located about 60km north of Mary, Turkmenistan (the capital city of Mary Province).....The site was discovered by Greek-Russian archaeologist Viktor Sarianidi. Sarianidi discovered a palace, a fortified mud-brick enclosure, and temples with fire altars which he believes were dedicated to the Zoroastrian religion. He also found what appears to be the boiler for the ritual drink soma, which is mentioned in the Rigveda and also in the Avesta as haoma. Sarianidi says he also found dishes with traces of cannabis, poppy and ephedrine. According to Sarianidi, this discovery strengthens the theory that these were the ingredients of soma."…http://en.wikipedia.org/wiki/Gonur_Tepe 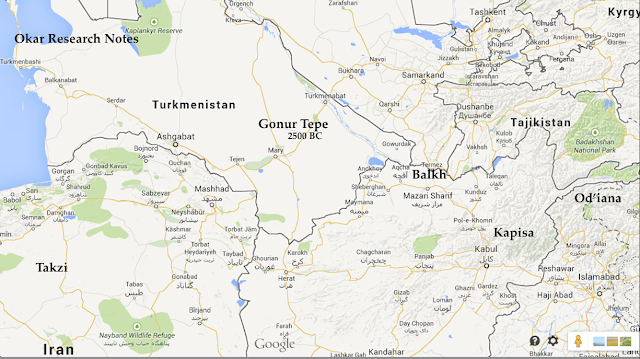 "Amrita (Sanskrit: अमृत; IAST: amṛta) or more correctly "Amrit" (Sanskrit: अमृत) is a Sanskrit word that literally means "immortality", and is often referred to in texts as nectar. The word's earliest occurrence is in the Rigveda, where it is one of several synonyms of "soma" as the drink which confers immortality upon the gods. It is related etymologically to the Greek "ambrosia", and it carries the same meaning. It has various significances in different dharmic traditions."…http://en.wikipedia.org/wiki/Amrita

Etymology…"Both Soma and the Avestan Haoma are thought to be derived from Proto-Indo-Iranian *sauma-. The name of the Scythian tribe Hauma-varga is related to the word, and probably connected with the ritual. The word is derived from an Indo-Iranian root *sav- (Sanskrit sav-/su) "to press", i.e. *sau-ma- is the drink prepared by pressing the stalks of a plant. The root is Proto-Indo-European (*sew(h)-)"…..http://en.wikipedia.org/wiki/Soma


The Ninth Mandala of the Rigveda is known as the Soma Mandala. It consists entirely of hymns addressed to Soma Pavamana ("purified Soma"). The drink Soma was kept and distributed by the Gandharvas. The Rigveda associates the Sushoma, Arjikiya and other regions with Soma (e.g. 8.7.29; 8.64.10-11). Sharyanavat was possibly the name of a pond or lake on the banks of which Soma could be found. It is described as "green-tinted" and "bright-shining" in the RigVeda. (R.V., 9.42.1 and 9.61.17)

"The plant is often described as growing in the mountains (giristha, cf. Orestes), notably Mount Mūjavant. It has long stalks, and is of yellow or tawny (hari) colour. The drink is prepared by priests pounding the plants with stones. The juice so gathered is filtered through lamb's wool, and mixed with other ingredients (including cow milk) before it is drunk. It is said to "roar". It is said to be the bringer of the gods."….http://en.wikipedia.org/wiki/Soma

"The ritual of Somayajna is still held with unbroken continuity in South India. The Somalatha (Sanskrit: Soma creeper) which is procured in small quantities from the Himalayan region is used to prepare Soma rasam or Soma juice. It is also used in these areas in Ayurveda and Siddha medicine streams since time immemorial. The herb which is used is Sarcostemma acidum."….http://en.wikipedia.org/wiki/Soma

"Avestan Haoma….The finishing of Haoma in Zoroastrianism may be glimpsed from the Avesta (particularly in the Hōm Yast, Yasna 9), and Avestan language *hauma also survived as middle Persian hōm. The plant Haoma yielded the essential ingredient for the ritual drink, parahaoma. It is to be noted here that the Persians used the phonetic "Ha" instead of "Sa" in their language. For example they called river Sarasvati, Haravati; River Sindhu is called Hindu ( some believe this is the root of the Hindu nomenclature), and here we see them call Soma - Haoma….In the Hōm yašt of the Avesta, the Yazata (divine) Haoma appears to Zoroaster "at the time of pressing" (havani ratu) in the form of a beautiful man. Yasna 9.1 and 9.2 exhort him to gather and press Haoma plants. Haoma's epitheta include "the Golden-Green One" (zairi-, Sanskrit hari-), "righteous" (ašavan-), "furthering righteousness" (aša-vazah-), and "of good wisdom" (hu.xratu-, Sanskrit sukratu-). In Yasna 9.22, Haoma grants "speed and strength to warriors, excellent and righteous sons to those giving birth, spiritual power and knowledge to those who apply themselves to the study of the nasks". As the religion's chief cult divinity he came to be perceived as its divine priest. In Yasna 9.26, Ahura Mazda is said to have invested him with the sacred girdle, and in Yasna 10.89, to have installed Haoma as the "swiftly sacrificing zaotar" (Sanskrit hotar) for himself and the Amesha Spenta. Haoma services were celebrated at least until the 1960s and 1970s in a strongly conservative village near Yazd. But the Avesta also warns of misuse. He distinguishes between the currently used drug-like Haoma, including Opium, and the real Divine Haoma."….

"Soma is also often associated with Light and Indra is the "Lord of Light" as shown in the following verses from the RgVeda: RV 8.82.25 For thee, O Lord of Light, are shed these Soma-drops, and grass is strewn. Bring Indra to his worshippers. May Indra give thee skill, and lights of heaven, wealth to his votary. And priests who praise him: laud ye him….There are several references in the RgVeda, associating Soma with the visionary seeing of Light e.g. RV 9.4, RV 9.5, RV 9.8, RV 9.10, RV 9.42."….http://en.wikipedia.org/wiki/Soma

" In the late 19th century, the highly conservative Zoroastrians of Yazd (Iran) were found to use Ephedra (genus Ephedra), which was locally known as hum or homa and which they exported to the Indian Zoroastrians. There are numerous mountain regions in the northwestern Indian subcontinent which have cool and dry conditions where ephedra plants can grow. Later Vedic texts mention that the best soma plants came from Mount Mūjavant, which may be located as in northern Kashmir and in neighboring western Tibet."….http://en.wikipedia.org/wiki/Soma

"Amrit (Tibetan: bDud.rTsi, pronounced "dutsi"), also plays a significant role in Vajrayana Buddhism as a sacramental drink which is consumed at the beginning of all important rituals (e.g. abhisheka, ganachakra, Homa). In the Tibetan tradition, 'dutsi' is made during drubchens - lengthy ceremonies involving many high lamas. It usually takes the form of small, dark-brown grains that are taken with water, or dissolved in very weak solutions of alcohol, and is said to improve physical and spiritual well-being."….http://en.wikipedia.org/wiki/Amrita

"The concept of an immortality drink is attested in at least two Indo-European areas: Greek and Sanskrit. The Greek ἀμβροσία (ambrosia) is semantically linked to the Sanskrit अमृत (amṛta) as both words denote a drink or food that gods use to achieve immortality. The two words appear to be derived from the same Indo-European form *ṇ-mṛ-to- : immortal (n- : negative prefix from which the prefix a- in both Greek and Sanskrit are derived; mṛ : zero grade of *mer- : to die; and -to- : adjectival suffix). A semantically similar etymology exists for nectar, the beverage of the gods (Greek: νέκταρ, néktar) presumed to be a compound of the PIE roots *nek-, "death", and -*tar, "overcoming"……http://en.wikipedia.org/wiki/Ambrosia