"Between 1700 and 1500 BC widescale collapse and transformation occurred throughout the entire Middle East........BMAC/Oxus Civilization collapsed and all of its Qala (Kala) settlements were abandoned in the century or so in the century 1700-1600 BC but concurrently BMAC/ Oxus materials occur throughout Iran and parts of the Indus Valley regions.... Recent archaeology reveals that the BMAC/Oxus civilization comes to an end around 1600 and people from the Oxus spread across the Iranian plateau as seen in their intrusive grave goods and tombs. Evidently people from the area north of the Kopet Dagh Mountains were migrating to the east, west and south at this time in the period 1700-1600 BC... In the Oxus region the long-standing structural tension between town dweller and nomad probably culminated around 1700 BC in conflict in which some of the actual subjects of the BMAC/Oxus rulers participated on behalf of their nomadic kin. It appears that as a result of this conflict the BMAC/Oxus cities were abandoned and the displaced farmers spread south across the Iranian Plateau..."............http://www.unm.edu/~gbawden/328-coll/328-coll.ht_ 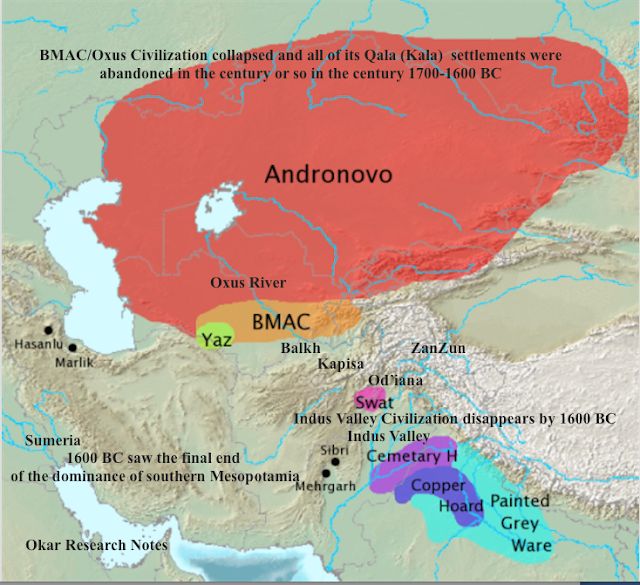 "In Mesopotamia the period leading up to 1600 BC saw the final end of the dominance of southern Mesopotamia with the destruction of the Old Babylonian Dynasty by Hittites from the north and Kassites who were originally nomadic peoples from the Zagros Mountains and western Iran."......http://www.unm.edu/~gbawden/328-coll/328-coll.ht_

"Sumer was conquered by the Semitic-speaking kings of the Akkadian Empire around 2270 BC....In around 1720 BC the last Sumerian King was defeated by Hammurabi and Sumer became part of the Babylonian empire... The Sumerians were a non-Semitic people and were in constant danger of attack from the Semitic peoples.... Babylon was an ancient city in the south of modern-day Iraq. Babylon became a hugely powerful and influential city when Hammurabi made it the capital of the Babylonian Empire in around 1720 BC......Once Sumerian culture was absorbed into Babylonian culture, the language of the Sumerians disappeared and there was no longer a people called the Sumerians. ".....http://www.skwirk.com

"India .....2500 BC - 1500 BC......The past thousand years have seen the Indus Valley civilization flourish, until about 1800 BC. It then began to decline. The history of ancient India during these centuries is obscure, but this decline has been linked by modern scholars to environmental factors, such as change in climate patterns or an overuse of land and water resources; migration by Indo-European tribes from central Asia may also have been another factor. In any event, by about 1700 BC the large cities of the Indus valley had disappeared altogether.".......http://www.timemaps.com/history/south-asia-1500bc

"By about 1700 BC the large cities of the Indus valley had disappeared altogether.......At about the same time, newcomers to India made their appearance, Indo-European speaking, semi-nomadic pastoralists from central Asia. They have brought with them the domestic horse and two-wheeled chariots, and have begun spreading out over the great plains of northern India. These “Aryans” are already starting to compose an oral poetry consisting of hymns, spells, rituals, dialogues and proverbs, which in later times will form the Vedas, the ancient foundation literature of Hindu civilization. These reflect a world under the rule of warrior aristocrats."..........http://www.timemaps.com/history/south-asia-1500bc

"Indus Valley Civilization disappears by 1600 BC and many of its settlements were abandoned. There was no major integrated urban society with a well-defined civilization in this region again until the period approximately dating to 1200-1000 BC.....later Hindu writings (Rig-Veda and Vedic Hymns) talk of the conquest of India by Aryans over darker skinned people of a different language. Linguistic analysis indicates that this diffusion may have happened in first half of the 2nd millennium. ".........http://www.unm.edu/~gbawden/328-coll/328-coll.ht_ 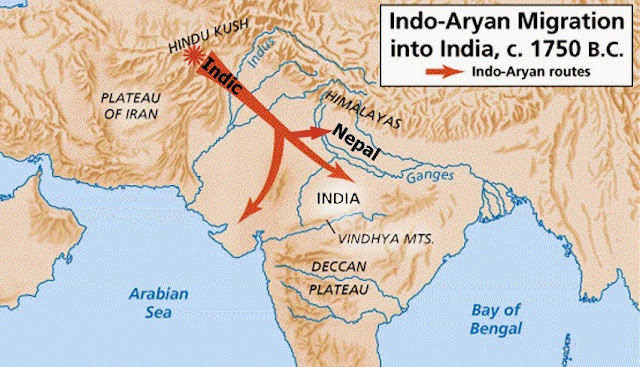 "Indo-Aryan migration to and within Northern India is consequently presumed to have taken place in the Middle to Late Bronze Age, contemporary to the Late Harappan phase in India (c. 1700 to 1300 BC)….http://en.wikipedia.org/wiki/Migration_period_of_ancient_Burma

"Pandemonium: The Asura/Deva Split (1500 BC).......The linguistic history indicates that the Aryans ("Indo-Europeans"....."Iran") originally formed a single people until the beginning of the 2nd millenium BC when the Deva worshipping Indian Aryans and the Asura worshiping Iranian Aryans went separate ways....... ... The Kalachakra discusses the expulsion of the Deva worshippers from Shambhala and refers to the Rigden kings as Asura." (Yarshater: 1987..pg 684)

"The Oxus civilization was a Bronze Age Central Asian culture dated to ca. 2300–1700 BC and centered on the upper Amu Darya (Oxus). In the Early Bronze Age the culture of the Kopet Dag oases and Altyn-Depe developed a proto-urban society. This corresponds to level IV at Namazga-Depe. Altyn-Depe was a major centre even then. Pottery was wheel-turned. Grapes were grown. The height of this urban development was reached in the Middle Bronze Age c. 2300 BC, corresponding to level V at Namazga-Depe. This Bronze Age culture is called the Bactria–Margiana Archaeological Complex (BMAC).".....V.M. Masson, The Bronze Age in Khorasan and Transoxiana, chapter 10 in A.H. Dani and Vadim Mikhaĭlovich Masson (eds.), History of civilizations of Central Asia

"Did Climate Change Bring Sumerian Civilization to an End?.......A geologist with the Byrd Polar Research Center believes that more than 200 years of excessive drought may have doomed the Sumerians, one of the world’s first complex civilizations whose culture and language disappeared from Mesopotamia around 4,000 years ago. At a recent meeting of the American Geophysical Union, geologist Matt Konfrist argued that new geological records point to an extended period of drought that began around 2200 B.C.E., with increased rates of evaporation in both the Dead Sea and the Red Sea and lower rainfall across much of the Near East. During this period of drought, archaeology shows that nearly 75 percent of ancient Mesopotamian settlements were abandoned, while waves of marauding invaders took up residence in former Sumerian areas, effectively bringing Sumerian civilization to an end. “People still live in this region,” explained Konfrist. “It’s not that the collapse of a civilization means that an area is completely abandoned, but that there’s a sharp change in the population.”.....http://www.biblicalarchaeology.org

"Sumerians believed in an anthropomorphic polytheism, or the belief in many gods in human form.....The Sumerians worshiped: ........An as the full-time god equivalent to heaven; indeed, the word an in Sumerian means sky and his consort Ki, means earth...... Inanna, the deification of Venus, the morning (eastern) and evening (western) star, at the temple (shared with An).....The sun-god Utu."....https://en.wikipedia.org/wiki/Sumer

"Gilgamesh is the semi-mythic King of Uruk best known from The Epic of Gilgamesh (The Sumerian Epic of Gilgamesh written on clay tablets...c. 2150 - 1400 BC ) ......The legend of Gilgamesh, who searches for the immortal flood hero, in the north. [2,500BC]....Since The Epic of Gilgamesh existed in oral form long before it was written down, there has been much debate over whether the extant tale is more early Sumerian or later Babylonian in cultural influence......"...http://www.ancient.eu/gilgamesh/

"Scientists have solved the mystery of the collapse of an ancient civilization living on the fringes of the Tibetan Plateau around 2,000 BC, and it seems that climate change is to blame......cooling global temperatures at the end of the Holocene Climatic Optimum - a 4,000 year period of warm weather - would have made it impossible for these ancient people to cultivate millet, their primary food source...Until now, scientists were left wondering why this Tibetan society died out, and also why the area's original inhabitants either left so abruptly or changed their lifestyles. This study may have finally given them the answer."..... Journal Proceedings of the National Academy of Sciences...http://www.natureworldnews.com

"The Mid-Holocene Climatic Optimum warm event......Current desert regions of Central Asia were extensively forested due to higher rainfall....By 5000 to 3000 BC average global temperatures reached their maximum level .......From 3000 to 2000 BC a cooling trend occurred. This cooling caused large drops in sea level and the emergence of many islands (Bahamas) and coastal areas that are still above sea level today......A short warming trend took place from 2000 to 1500 BC, followed once again by colder conditions. Colder temperatures from 1500 - 750 BC caused renewed ice growth in continental glaciers and alpine glaciers, and a sea level drop of between 2 to 3 meters below present day levels.".......http://www.atmo.arizona.edu/