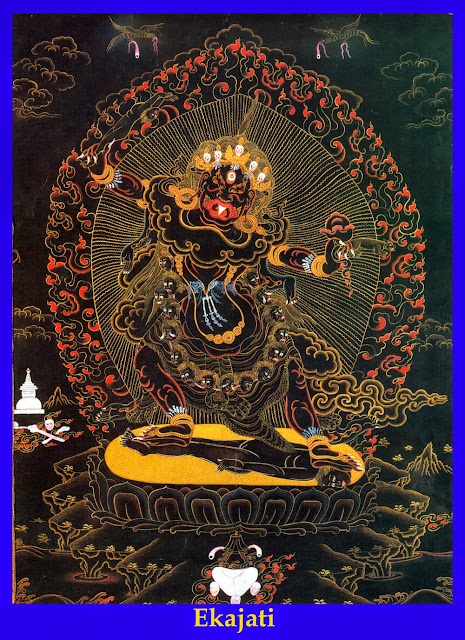 "Ekajati is the primary protector of the Dzogchen teachings, and the guardian of all Termas. Her name literally means “One Braid of Hair,” and alludes to her extremely symbolic non-dual appearance. In the Dzinpa Rangdröl cycle (and most Nyingma systems), she has one eye, one fang, one breast, and one lock of hair. Being a quintessential embodiment of non-duality, one of her epithets is “the mother of the mother of all the Buddhas.” In the Sakya tradition she is considered to be the mother of Palden Lhamo. It’s not known for certain whether Ekajati originated in the Hindu, Buddhist, or Bön pantheon, but some have suggested that Nagarjuna brought her practice from India to Tibet in the 7th century. According to most Tibetan sources, she was a Bön goddess whom Guru Rinpoche bound under oath as a protector of the teachings. He is said to have gauged out one of her eyes with his Phurba, leaving her with only one."....http://taramandala.org

"Ekajaṭī or Ekajaṭā, (Sanskrit; Tibetan: ral chig ma. English: One Braid of Hair), also known as Māhacīna-tārā (1), one of the 21 Taras, is one of the most powerful and fierce goddesses of Indo-Tibetan mythology. According to Tibetan legends she is an acculturation of the Bön goddess of heaven, whose right eye was pierced by the tantric master Padmasambhava so that she could much more effectively help him subjugate Tibetan demons. Ekajati is also known as 'Blue Tara'. She is generally considered one of the three principal protectors of the Nyingma lineage, along with Rāhula and Vajrasādhu (Dorje Legpa)." 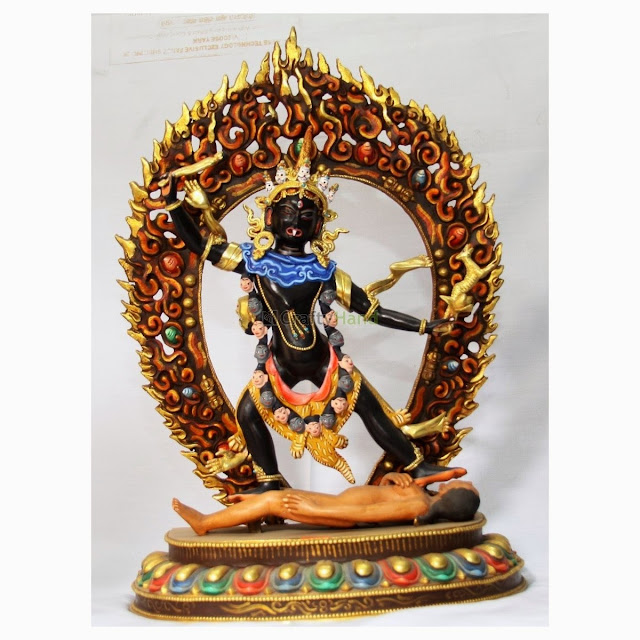 "Often she appears as liberator in the mandala of Green Tara. Along with that her ascribed powers are removing the fear of enemies, spreading joy and removing personal hindrances on the path to enlightenment."

"Ekajati is also known as Blue Tara, or Māhacīna-tārā, the most wrathful form of Tara. In the Dzinpa Rangdröl (3) protectors’ text, she is holding “the enemy’s heart” (the enemy being samaya breakers/breakages, and those who are vicious towards the Dharma) in her right hand, which she is feeding into her mouth. In her left hand, she is commanding her messenger (Tib. spyan gzigs), which is a female turquoise wolf. In some Bön depictions of Ekajati, the turquoise wolf actually serves as her mount."....http://taramandala.org

"Ekajati is the protector of secret mantras and "as the mother of the mothers of all the Buddhas," represents ultimate unity. As such her own mantra is also secret. She is the most important protector of the Vajrayana teachings, especially the inner tantras and termas. As the protector of mantra she supports the practitioner in deciphering symbolic dakini codes and properly determines appropriate times and circumstances for revealing tantric teachings. Because she completely realizes the texts and mantras under her care, she reminds the practitioner of their preciousness and secrecy.[4]

"According to Chogyal Namkhai Norbu Rinpoche, Ekajati is the principal guardian of the Dzogchen teachings and is "a personification of the essentially non-dual nature of primordial energy."[5]

Dzogchen is the most closely guarded teaching in Tibetan Buddhism, of which Ekajati is a main guardian as mentioned above. It is said that Sri Singha (Sanskrit: Śrī Siṃha) himself entrusted the Nyingthik teachings to her care. To the great master Longchenpa, who initiated the dissemination of certain Dzogchen teachings, Ekajati offered uncharacteristically personal guidance. In his thirty-second year, Ekajati appeared to Longchenpa, supervising every ritual detail of the Heart Essence of the Dakinis {Khandro Nyingthik (6)} empowerment, insisting on the use of a peacock feather and removing unnecessary basin. When Longchenpa performed the ritual, she nodded her head in approval but corrected his pronunciation. When he recited the mantra, Ekajati admonished him, saying, "Imitate me," and sang it in a strange, harmonious melody in the dakini's language. Later she appeared at the gathering and joyously danced, proclaiming the approval of Guru Rinpoche (Padmasambhava) and the dakinis."[4]

"Visions of Ekajati are considered highly auspicious and to be treasured."

"Ekajaṭī is found in both the Buddhist and Hindu pantheons; it is most often asserted that she originated in the Buddhist pantheon but some scholars argue this is not necessarily so.(7)"

"Ekajati (San. “single twisted lock of hair”) is a dharmapali, described as a wrathful mamo or dakini, who is an especially important protectress of the ati teachings. She is dark blue, with a single topknot, one eye, one fang, and one breast. She wears a skull crown and bone ornaments, with a tiger skin around her waist. Enveloped in clouds, she holds a heart in her right hand and emanates wolves from her left.....mamos (Tib.): Wrathful goddesses, usually pictured as furious, ugly women. They can be dakinis acting as protectors. Ekajati is their queen."...http://nalandatranslation.org

"Ekajati....The primary protectress of the Nyingma Tradition.....Mamo Ekajati (man mo e mKha dza ’ti) is the non-dual queen – the most inportant of the Ma Za Dor Sum (the three protectors of the Nyingma tradition). There are various spellings of the Sanskrit name Ekajati in Tibetan – either ‘e mKha’ or ‘ye ka’. Either ‘e’ or ‘ye’ mean ‘primordial’. ‘E mKha’ means primordial sky, and relates to Ekajati particularly as she functions with regard to the Dzogchen teachings. In relation to the Dzogchen teachings she is known as ral-chig ma (ral gCig ma) – the single-plait mother. Her single tuft of hair, eye, tooth, and breast, are symbolic of non-duality. She wears a cloud as a garment to indicate that she dwells within the expanse of the sky. "....http://www.aroencyclopaedia.org 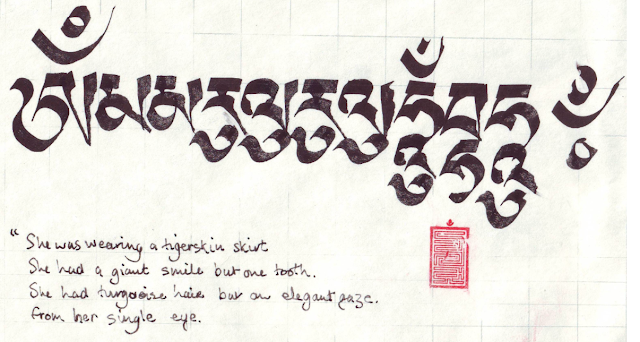 "Ekajati is one of the Twenty One Taras and considered one of the most powerful and fierce goddesses of Indo-Tibetan mythology. According to Tibetan legend, Ekajati, is a Bon goddess, belonging to a religion that pre-dated Buddhism in Tibet......There are many images of Ekajati some in her peaceful form with a dark blue body, one face and two arms, holding a skull bowl and a chopping knife at her heart. Between her eyes she has a vertical wisdom eye gazing into space and sitting in the vajra position and wearing ornaments of the joy state. Sometimes she appears in wrathful form twice her human size; shrieking, her eye boiling as she gnashing her fang and brandishing weapons."...http://nelabligh.com/2012/06/20/wednesdays-wise-woman-ekajati/

"Is Vetali a "real entity"?.......Well, are these forces "real", and are they like "persons", and do they come from Tibet (or India)? Let's take Mahakali Vetali as an example (if she permits). The Vidyadhara suggested that we visualize Vetali in the context of the chant "Pacifying the Turmoil of the Mamos", because, he said "she is the Queen of the Mamos" in the sense of having sovereignty over them......Perhaps at our level of development we might say that Mahakali Vetali is a symbolic teaching that suggests how to relate with feminine energy in its complete spectrum of manifestations, and how to invoke the help of the lineage in transmuting and pacifying obstacles. On the one hand, "she" -- or rather her many emanations -- are very close to us. On the other hand Vetali-Rangjung Gyelmo is a cosmic principle, she is an activity manifestation of enlightened lineage. By suggesting this is "symbolic teaching" I don't mean it is not real. On the contrary, what "Vetali" actually refers to, may be much more real and pervasive than our projections of some little protective deity we have with us. Perhaps to say that she is an "entity" limits too much the scope of what Vetali "means." "Entity" is the language of solidified ego-projection, and no doubt such ego-projection does not see a force like this as it truly is."....http://chronicleproject.com/stories_172.html

"Durga (Sanskrit: दुर्गा), meaning "the inaccessible" or "the invincible", one of the main forms of the Goddess Shakti in the Hindu pantheon. Durga is the original manifested form of Mother Adi-Parashakti. Durga is Adi- Parashakti herself.... she is considered the supreme goddess and primary deity in Shaktism.....Devi Durga is a Hindu concept of the Ultimate Shakti or Mahashakti, the ultimate power inherent in all Creation. This is especially prevalent in the Shakta denomination within Hinduism, which worships the Goddess Devi in all her manifestations. She is Goddess Lakshmi and Goddess Saraswati in her mild form; Goddess Kali and Goddess Chandi in her wrathful form..... 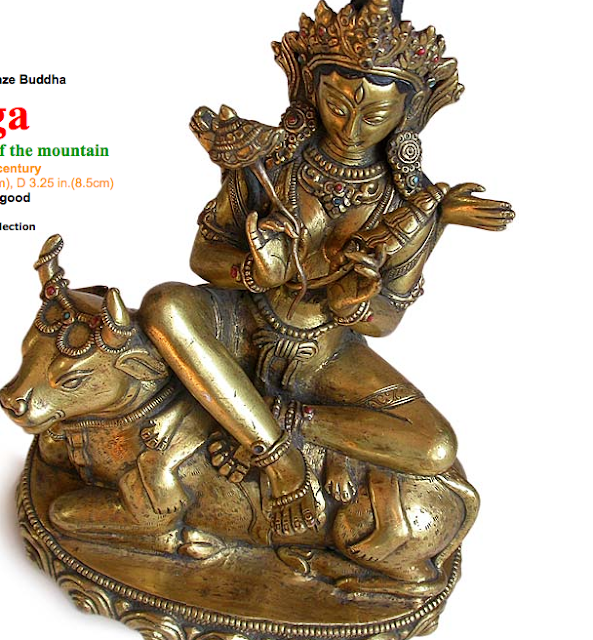 "Durga......Shailaputri, daughter of the mountain.....Tibet, circa: 18th century.....Private Collection....."This mysterious Tibetan sculpture derives its subject from the Hindu tradition of the goddess Durga, a form of Shakti worshipped for her gracious as well as terrifying aspects as Mother of the Universe. She represents the infinite power of the universe and is a symbol of female energies. Of her nine forms, the one shown here is Shailaputri, daughter of the mountain, who gave birth to the elephant-headed god Ganesh, the son of Shiva, whose mount is Nandi the bull. Shailaputri is depicted on her own garlanded and bejeweled bull, holding her attributes of an open lotus and a trident, or in this case, a victory banner which proclaims the triumph of Buddhism."....http://www.buddhamuseum.com/four-armed-durga_10.html

(1.)....The Alchemical Body: Siddha Traditions in Medieval India By David Gordon White. pg 65
(2.)....(Drupchen Binder, pg 119)....."Drupchen (Tib. གྲུབ་ཆེན་, Wyl. sgrub chen) — literally “vast accomplishment,” is a form of intensive group practice that epitomizes the depth, power, and precision of the Vajrayana, drawing together the entire range of its skilful methods—mystical, ritual, and artistic—and including: the creation of the mandala house; the complete sadhana practice with visualization, mudra, chant, and music; continuous day and night practice of mantra; the creation of tormas and offerings, with sacred substances and precious relics; the tsok feast; the sacred dance of cham; as well as the construction of the sand mandala. All blend to create the transcendent environment of the pure realm of the deity and awaken, for all those taking part, the pure perception of this world as a sacred realm.".....http://www.rigpawiki.org
(3.)....The Dzinpa Rangdröl Ngöndro (foundational practices) of the Yangsang Khandro Tug Tig (Exceedingly Secret Heart Essence of the Dakini) cycle is the gateway for entering the profound lineage of the Dzinpa Rangdröl cycle.
(4).....Dakini's Warm Breath: The Feminine Principle in Tibetan Buddhism By Judith Simmer-Brown. pg 276
(5.)...Namkhai Norbu (1986). The Crystal and the Way of Light.
(6.)....Khandro Nyingtig. Khandro Nyingtig means 'Heart Essence / core of the Dakinis.' A profound collection of Dzogchen teachings transmitted through Padmasambhava to Princess Pema Sal and revealed as terma teachings revealed by pad ma las 'brel rtsal. Is included within the famous Nyingtig Yabshi present wisdom. (7.)...."The Goddess Mahācīnakrama-Tārā (Ugra-Tārā) in Buddhist and Hindu Tantrism" by Gudrun Bühnemann. Bulletin of the School of Oriental and African Studies, University of London, Vol. 59, No. 3 (1996), pp. 472......Kooij, R. K. van. 1974. "Some iconographical data from the Kalikapurana with special reference to Heruka and Ekajata", in J. E. van Lohuizen-de Leeuw and J. M. M. Ubaghs (ed.), South Asian archaeology, 1973. 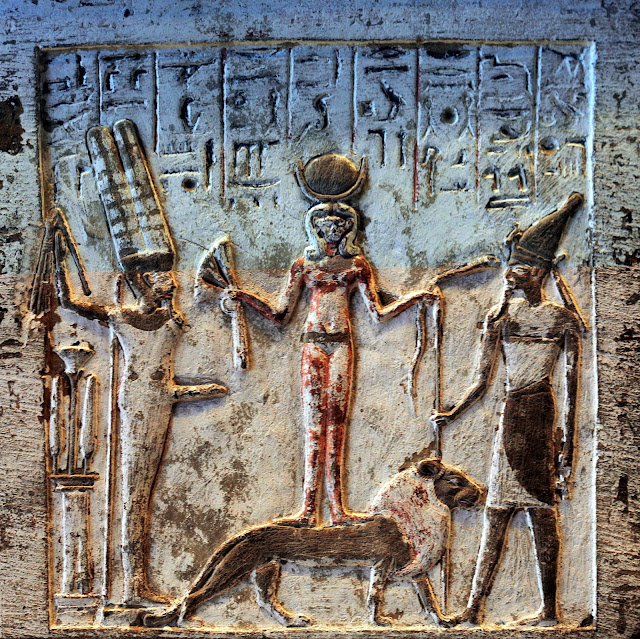 "Queen of Heaven.....Asherah, The Lion Lady.....These days a naked lady holding a snake and riding a lion is not the first image which comes to mind when the word “holy” is spoken. However, that is exactly the title of the goddess at the center of the picture above.... She is labeled Qadesh (Qudshu), which means “the Holy One.” Who is she? Some say an as yet unknown deity whose name is Qadesh..... Astarte (Ashtart, biblical Ashtoreth), the western variant of Babylonian Ishtar, goddess of the planet Venus (a.k.a. the Morning and Evening Star) and the Goddess of Love and War. This goddess was associated with a lion there. But more likely she is Asherah, the Mother Goddess, who is called in some written documents the Qadesh and also is frequently given the title the Lion Lady."….http://thequeenofheaven.wordpress.com/2010/11/16/asherah-part-iii-the-lion-lady/